Test-Driven Development (TDD) simplifies the trickiest of software tasks with its unique ability to peel back problems into layers. The testing tools available in Python and Django make test writing a joy, and the full coverage test suite that results from TDD is a boon to any project.

This guide to developing with Django takes a test-first approach: write a test, then write enough production code to get it to pass. You'll quickly get hands-on experience, writing tests for a database-driven application with the TDD methodology. Use this book to build the skills and habits that make testing a regular part of your workflow.

In this chapter, we'll be introduced to Test-Driven Development. We will explore:

What is Test-Driven Development?

Test-Driven Development (TDD) is the practice of:

The initial test is the bar you set for the logic that you want to write. It's a great way to ensure that your tests cover every nook and cranny of your code, and that it delivers exactly what you said it would.

Throughout this book, we'll explore TDD through numerous examples in a medium-sized Django project. We'll use lots of different Python utilities and see lots of sample code. The takeaway should not be any particular package (there are many other tools besides the ones we'll feature in this book), but the process itself and the change in approach required. It's a methodology, not a technology. It's a way of building applications and a discipline that requires practice.

Here's a quick example using Python's built-in assert, a statement that evaluates a condition. It will throw an AssertionError if the condition is false, and returns nothing otherwise.

Let's say we wanted a Python function that could multiply two numbers together and return the result. Let's call it multiplicator.

The first step in TDD, before writing any code, is to find a way to test the application you want to write. If you're having trouble coming up with a test scenario, imagine that you've already written the application (in this case, that single function) and want to try it out in the command line. You'd probably do something like this:

You, the human, would look at the output of the function call (6) and confirm that the operation was performed successfully. How can we teach our application to do this confirmation itself? Enter assert. Create a file called multiplicator.py and enter the following code:

We can translate this statement into English as "run multiplicator with arguments 2 and 3 and throw an error if the returned value does not equal 6."

We'll get into the more interesting tools available in the unittest library in Chapter 2, Your First Test-Driven Application. For now, this is all we need to see how TDD works.

We now have a runnable test for our function, without so much as an attempt to write the function itself. Let's run it and see what happens:

Looks like Python can't find anything called multiplicator. We can fix that with the following code:

Okay, our function needs to accept some arguments. Let's update it:

And finally, when we run our test again:

This AssertionError is the one we asked our test to throw (via assert) if the result of our function did not equal the expected value (6). Now that we're here, we can write some logic:

Whoa there, Tex! That's one way to do itâ€¦ I suppose. Should we run the tests?

Huh? No output? No error? You mean that monstrosity actually made the test pass?

Yes it did! We wrote application code to make the test pass without any pressure to optimize it, or without picking the best Python function to make it work. Now that we have the test passing, we can optimize to our heart's content; we know we're safe as long as the test continues to pass.

Let's update multiplicator to use some of Python's own integer arithmetic:

Now, we can run our test again:

That's better. We built a working, optimized function and a test suite to check for regressions using basic TDD methodology. This process is often referred to as "red/green/refactor".

In the preceding example, we wrote a test for the desired functionality and watched it fail (red). Then we wrote some less-than-optimal code to get it to pass (green). Finally, we refactored the code to simplify the logic while keeping the test passing (refactor). This virtuous circle is how TDD helps you write code that is both functional and beautiful.

Testing is a pillar of professional software development

There are four key practices to writing great code:

Each builds upon the next and a thoughtful execution of each guarantees the delivery of quality software.

Version control is the ultimate undo button. It allows you to check code changes into a repository at regular intervals and rollback to any of those changes later. We'll be using Git throughout the course of this book. To get a good primer on Git, check out http://git-scm.com/doc.

Testing and documentation have a crucial relationshipâ€”your tests prove that your documentation is telling the truth. For instance, the documentation for a REST API may instruct a developer to send a POST request to a given URL, with a certain JSON payload in order to get back a certain response. You can ensure this is what happens by exercising this specific behavior in your tests.

All of these glorious tests will be pretty useless if no one is running them. Luckily, actually running the tests (and alerting us of any failures) is another thing we can train a machine to do. A Continuous Integration (CI) server, for our purposes, can pull our project from version control, build it, run our tests, and alert us if any errors or failures occur. It can also be the first place where our tests are run in a production-like environment (for instance, in the same operating system and database configuration), allowing us to keep our local environments configured for speed and ease.

How does TDD help in building better software?

From the outset, Test-Driven Development seems like a lot more work. We could very well be doubling the size of our code base with a test for every single branch in our logic. Here's why all that extra code will be worth it:

A common criticism of TDD is that it slows down the development cycle. All these tests are a bunch more code. Wouldn't you have to go back and update them if you changed your application?

The answer is yes, in the short term, TDD will add time to the development cycle, particularly when you're first learning it. Writing tests is a skill and skills take practice. Once you're through the learning curve, writing test functions is much easier and faster than writing the application code. Tests are generally terse (do this, do this, check that, and so on) without complicated logic or looping. The best tests are the simplest ones. You'll be able to crank them out quickly.

The extra effort in TDD comes with the added thinking you have to do. Writing a test before you write code requires a true understanding of what you're trying to accomplish, which can be hard. But does that honestly sound like a bad thing? I'd argue that this is a decidedly positive aspect of TDDâ€”added time spent thinking through the meaning of your code yields higher quality code. You'll uncover unforeseen complications as your tests reveal edge cases that didn't come out in code review sessions. Conversations with project owners will be more meaningful after you've put the requirements through their paces. Your application code will benefit from the extra care.

Now let's talk about the long term. Towards the end of the project, or even after launch, a big change will come down from the product owner (this is Agile, right?) or you'll find something fundamental that you want to modify. The comprehensive test suite you've built through TDD will pay you back in spades when something goes wrong, or if you need to refactor. The flexibility provided by your test suite will likely save you more time than you spent creating it. You'll thank TDD in the end.

There are many reasons that you may want to develop without writing tests first. Maybe you're using a new API and can't begin to think about how to write tests. Maybe you want to build a simple application quickly as a proof of concept for a client.

By all means, write code without tests, but know that code without tests is a prototype at best. Resist the urge to start the production version of your project from a testless prototype. After prototyping, start again with TDD instead of trying to go back, and write tests for the prototype.

Even if you are only creating a prototype, consider TDD for any complexity at all. If you find yourself repeatedly dropping into ./manage.py shell sessions to set up, execute, and evaluate a function under development, write a test or two to turn that process into a single command.

In this chapter, we introduced the practice of TDD and the benefits of using it. In the next chapter, we will start a Django project from scratch using rigorous TDD methodology, learning some of the testing tools available in Django and Python along the way.

Having this information at my disposal at this price, I can't get enough. Thanks! 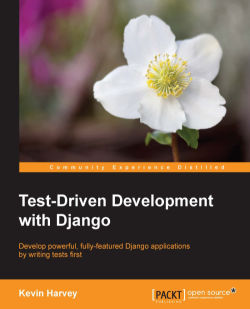