GraalVM is a universal virtual machine that allows programmers to compile and run applications written in both JVM and non-JVM languages. It improves the performance and efficiency of applications, making it an ideal companion for cloud-native or microservices-based applications.

This book is a hands-on guide, with step-by-step instructions on how to work with GraalVM. Starting with a quick introduction to the GraalVM architecture and how things work under the hood, you'll discover the performance benefits of running your Java applications on GraalVM. You'll then learn how to create native images and understand how AOT (ahead-of-time) can improve application performance significantly. The book covers examples of building polyglot applications that will help you explore the interoperability between languages running on the same VM. You'll also see how you can use the Truffle framework to implement any language of your choice to run optimally on GraalVM.

By the end of this book, you'll not only have learned how GraalVM is beneficial in cloud-native and microservices development but also how to leverage its capabilities to create high-performing polyglot applications.

This chapter will walk you through the evolution of Java Virtual Machine (JVM), and how it optimized the interpreter and compiler. We will learn about C1 and C2 compilers and various types of code optimizations that the JVM performs to run Java programs faster.

This chapter does not require any specific software/hardware.

Here are some of the key requirements of a cloud-native application built on the microservice architecture:

GraalVM provides a solution to all these requirements and provides a common platform to embed and run polyglot cloud-native applications. It is built on JVM and brings in further optimizations. Before understanding how GraalVM works, it's important to understand the internal workings of JVM.

This chapter will walk you through in detail how JVM works and the key components of the JVM architecture.

JVM has taken the best of both interpreters and compilers. The following diagram illustrates how JVM runs the Java code using both the interpreter and compiler approaches: 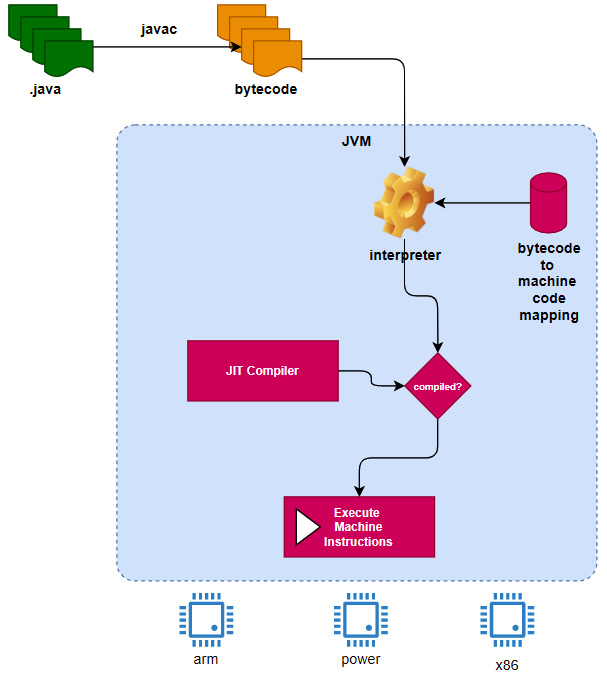 Let's see how this works:

In this section, we looked at how Java Compiler and JIT work together to run Java code on JVM at a higher level. In the next section, we will learn about the architecture of JVM.

Over the years, JVM has evolved into the most mature VM runtime. It has a very structured and sophisticated implementation of a runtime. This is one of the reasons why GraalVM is built to utilize all the best features of the JVM and provide further optimizations required for the cloud-native world. To better appreciate the GraalVM architecture and optimizations that it brings on top of the JVM, it's important to understand the JVM architecture.

This section walks you through the JVM architecture in detail. The following diagram shows the high-level architecture of various subsystems in JVM: 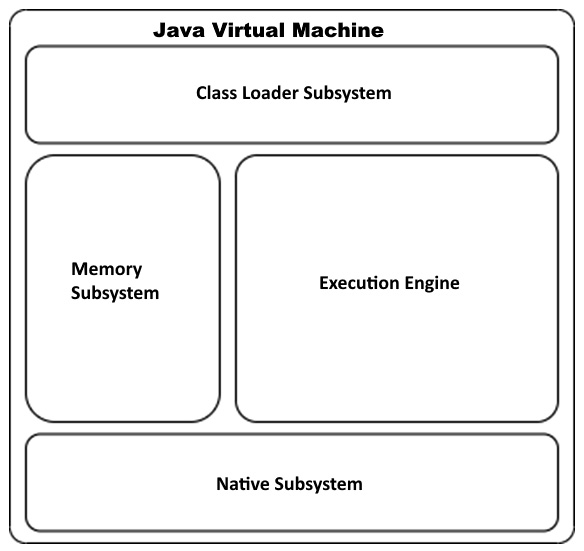 The rest of this section will walk you through each of these subsystems in detail.

The following diagram shows the various components of the class loader subsystem:

Let's now look at what each of these components does.

Java source code (.java) is compiled by Java Compiler (javac) to bytecode (.class) files. Class loader is one of the key subsystems of the JVM, which is responsible for loading all the dependent classes that are required to run the application. This includes the classes that are written by the application developer, the libraries, and the Java Software Development Kit (SDK) classes.

There are three types of class loaders as part of this system: 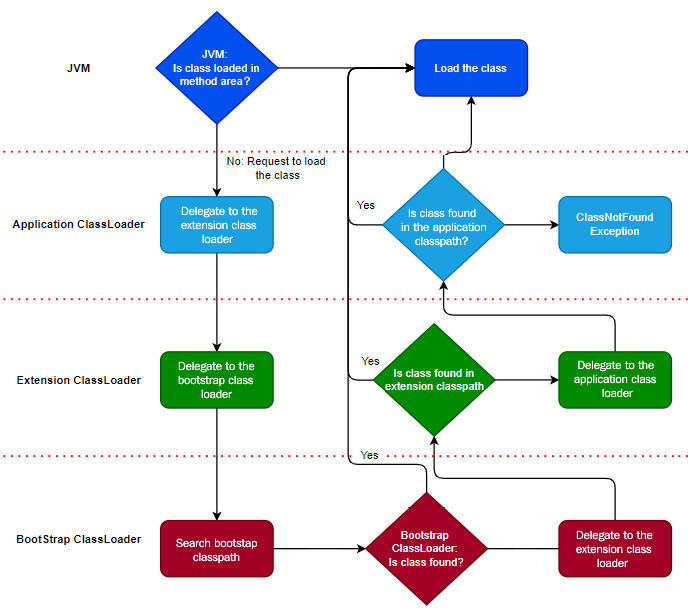 Let's understand how this algorithm works:

Once the classes are loaded into the memory (into the method area, discussed further in the Memory subsystem section), the class loader subsystem will perform linking. The linking process consists of the following steps:

The class loader subsystem raises various exceptions, including the following:

You can refer to the Java specifications for more details: https://docs.oracle.com/en/java/javase.

Once all the classes are loaded and symbols are resolved, the initialization phase starts. During this phase, the classes are initialized (new). This includes initializing the static variables, executing static blocks, and invocating reflective methods (java.lang.reflect). This might also result in loading those classes.

Class loaders load all the classes into the memory before the application can run. Most of the time, the class loader has to load the full hierarchy of classes and dependent classes (though there is lazy resolution) to validate the schematics. This is time-consuming and also takes up a lot of memory footprint. It's even slower if the application uses reflection and the reflected classes need to be loaded.

After learning about the class loader subsystem, let's now understand how the memory subsystem works. 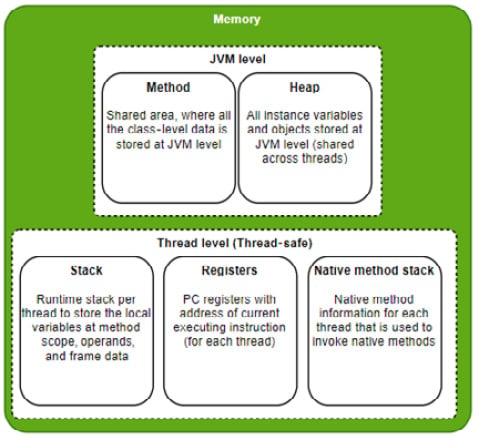 The memory subsystem has two areas: JVM level and thread level. Let's discuss each in detail.

JVM-level memory, as the name suggests, is where the objects are stored at the JVM level. This is not thread-safe, as multiple threads might be accessing these objects. This explains why programmers are recommended to code thread-safe (synchronization) when they update the objects in this area. There are two areas of JVM-level memory:

Now that the classes are loaded into the memory, let's look at how the JVM execution engine works. 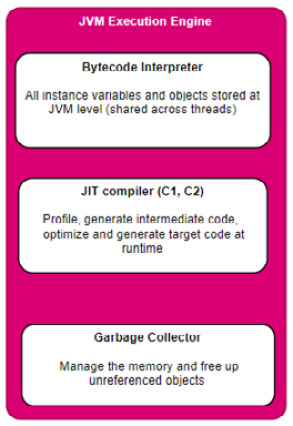 We will talk about each component in detail in the following sections.

As mentioned earlier in this chapter, bytecode (.class) is the input to the JVM. The JVM bytecode interpreter picks each instruction from the .class file and converts it to machine code and executes it. The obvious disadvantage of interpreters is that they are not optimized. The instructions are executed in sequence, and even if the same method is called several times, it goes through each instruction, interprets it, and then executes.

The JIT compiler saves the day by profiling the code that is being executed by interpreters, identifies areas where the code can be optimized and compiles them to target machine code, so that they can be executed faster. A combination of bytecode and compiled code snippets provide the optimum way to execute the class files.

The following diagram illustrates the detailed workings of JVM, along with the various types of JIT compilers that the JVM uses to optimize the code: 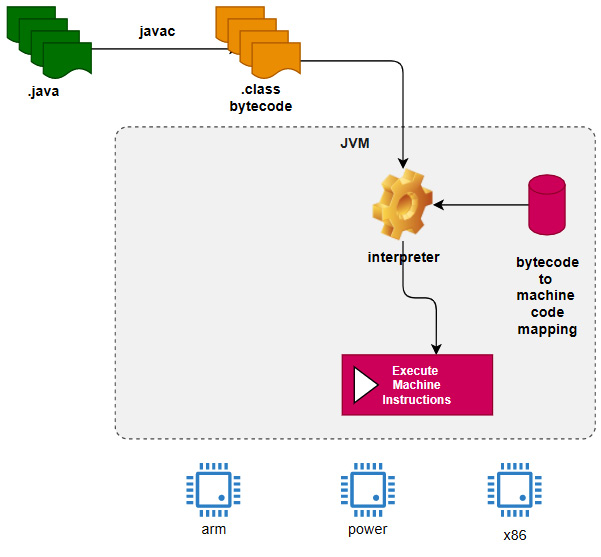 Figure 1.7 – The detailed working of JVM with JIT compilers

Let's understand the workings shown in the previous diagram:

As illustrated in Figure 1.7, the JIT compiler brings in optimizations by profiling the code that is running and, over a period of time, it identifies the code that can be compiled. The JVM runs the compiled snippets of code instead of interpreting the code. It is a hybrid method of running interpreted code and compiled code.

JVM introduced two types of compilers, C1 (client) and C2 (server), and the recent versions of JVM use the best of both for optimizing and compiling the code at runtime. Let's understand these types better:

C1 is faster and good for short-running applications, while C2 is slower and heavy, but is ideal for long-running processes such as daemons and servers, so the code performs better over time.

Let's now look at the various types of code optimizations that the JVM applies during compilation.

The following are some of the optimizations that the JIT compilers perform on the code:

Apart from this, the JIT compiler performs other optimizations, such as control flow optimization, which includes rearranging code paths to improve efficiency and native code generation to the target machine code for faster execution.

JIT compiler optimizations are performed over a period of time, and they are good for long-running processes. We will be going into a detailed explanation on JIT compilation in Chapter 2, JIT, Hotspot, and GraalVM.

The ahead-of-time compilation option was introduced with Java 9 with jaotc, where a Java application code can be directly compiled to generate final machine code. The code is compiled to a target architecture, so it is not portable.

Java supports running both Java bytecode and AOT compiled code together in an x86 architecture. The following diagram illustrates how it works. This is the most optimum code that Java can generate: 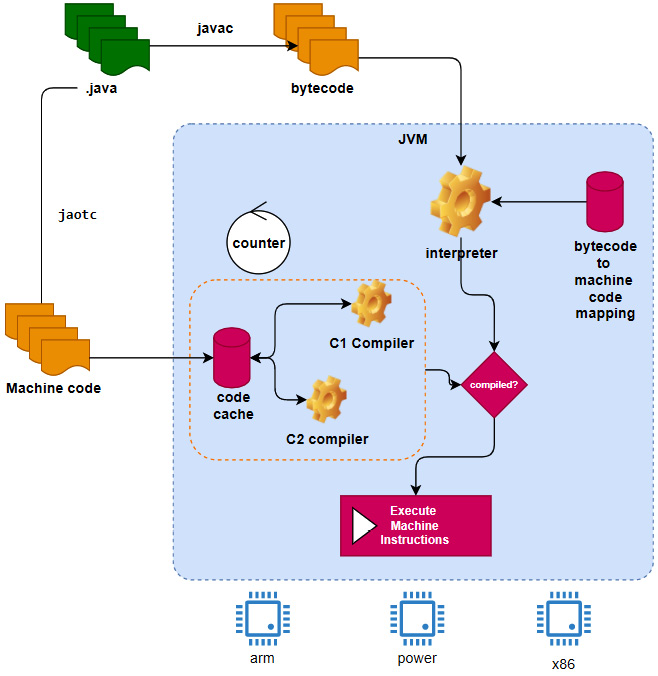 Figure 1.8 – The detailed workings of JVM JIT time compilers along with the ahead-of-time compiler

The bytecode will go through the approach that was explained previously (C1, C2). jaotc compiles the most used java code (like libraries) into machine code, ahead of time, and this is directly loaded into the code cache. This will reduce the load on JVM. The Java byte code goes through the usual interpreter, and uses the code from the code cache, if available. This reduces a lot of load on JVM to compile the code at runtime. Typically, the most frequently used libraries can be AOT compiled for faster responses.

One of the sophistication of Java is its in-built memory management. In languages such as C/C++, the programmer is expected to allocate and de-allocate the memory. In Java, JVM takes care of cleaning up the unreferenced objects and reclaims the memory. The garbage collector is a daemon thread that performs the cleanup either automatically or can also be invoked by the programmer (System.gc() and Runtime.getRuntime().gc()).

The native subsystem provides the implementation to access and manage the native libraries.

JVM has evolved and has one of the most sophisticated implementations of a language VM runtime.

In this chapter, we started by learning what GraalVM is, followed by understanding how JVM works and its architecture, along with its various subsystems and components. Later on, we also learned how JVM combines the best of interpreters and the compiler approach to run Java code on various target architectures, along with how a code is compiled just-in-time with C1 and C2 compilers. Lastly, we learned about various types of code optimizations that the JVM performs.

This chapter provided a good understanding of the architecture of JVM, which will help us understand how the GraalVM architecture works and how it is built on top of JVM.

The next chapter will cover the details of how JIT compilers work and help you understand how Graal JIT builds on top of JVM JIT.

Read more Unlock this book with a 7 day free trial.
About the Author
fast and serious payment Procedure 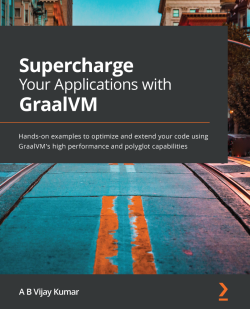