This book is an introduction to modeling and an in-depth look at topology in Blender. It will walk you through quad-based topology, and topology using triangles and Ngons. It illustrates best practices and things to avoid while modeling and retopologizing. It is full of illustrations and examples with in-depth explanations that showcase each step in an easy-to-follow format.

The book starts by introducing you to the user interface and navigation. It then goes through an overview of the modeling techniques and hotkeys that will be necessary to understand the examples. With the modeling basics out of the way, it goes straight into topology. Working through projects like a character, and a sci-fi blaster, the book will encounter and work through complex topology problems, and present solutions to the same. These examples focus on deforming character models, non-deforming hard surface models, and optimizing these models by reducing the triangle count.

By the end of this book, you will be able to identify the general flow of a shape's topology, identify and solve issues in your topology, and come out with a model ready for UV unwrapping, materials, and rigging. 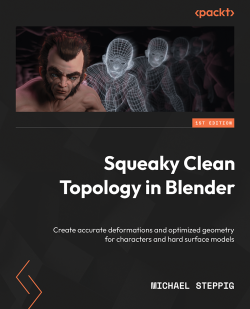