Microsoft's launch of SQL Server on Linux has made SQL Server a truly versatile platform across different operating systems and data-types, both on-premise and on-cloud.

This book is your handy guide to setting up and implementing your SQL Server solution on the open source Linux platform. You will start by understanding how SQL Server can be installed on supported and unsupported Linux distributions. Then you will brush up your SQL Server skills by creating and querying database objects and implementing basic administration tasks to support business continuity, including security and performance optimization. This book will also take you beyond the basics and highlight some advanced topics such as in-memory OLTP and temporal tables.

By the end of this book, you will be able to recognize and utilize the full potential of setting up an efficient SQL Server database solution in your Linux environment.

Welcome to the exciting new journey of our old friend in a new environment. Yes, we are talking about one of the best database platforms in the world. SQL Server is well known in the domain of the Windows operating system, whether we speak of small, medium, or enterprise-size businesses. Cloud computing pushes those limits even further in the directions of big data analytics and data science. SQL Server has it all.

Linux, or to be precise GNU/Linux, is one of the best alternatives to Windows and, in many cases, it is the first choice of environment for daily tasks such as system administration, running different kinds of services, or just a tool for desktop application. Linux, which is the actual name for a kernel, was originally developed in 1991 by Linus Torvalds as his response to the MINIX operating system, which was limited to educational use. It was quickly recognized by the open source community, adopted, and packaged in many distributions. It's fascinating how large that number is. I believe that you've heard or read at least one name in the following list (the list is arranged by date (1993 - 2013)): Debian, Slackware, SUSE Linux, Red Hat Linux, CentOS, Fedora, Ubuntu, Tails, Kali Linux, and many more. Today, GNU/Linux does not hold a large chunk of the desktop operating system market. That fact is changing and many people, organizations, businesses, and even states are embracing this technology. But, if we talk about the server market, the situation is quite the opposite. Linux is holding a large share of the market.

However, Linux territory was a no-go for Microsoft products for a long time to be precise, from the beginning. Now, Microsoft loves Linux. A couple of years ago, this sentence would've sounded like a bad science fiction scenario. Fortunately, Microsoft has changed and become friendly to open source and free software philosophies. One of the reasons for this 180 degree change is cloud computing. New paradigms simply don't push old platform limitations to the background. Everything is a service now and it is not important where that service (Windows/Linux/Unix) is. The fact that Microsoft is pushing its core product on a couple of major Linux distributions speaks for itself.

However, one segment of the database ecosystem was out of Microsoft's reach. Linux was mostly reserved for open source representatives such as MySQL, PostgreSQL, and MariaDB, or proprietary ones such as IBM's DB2 and Oracle. But now it is time to change those facts. We can say that Microsoft is officially offering their data platform flagship as options and choice for database professionals in the Linux world. There are varied kinds of responses to this subject, from totally negative to positive comments. My opinion is that this is good thing. SQL Server is one of the best database environments; let's give them a chance to prove it on the ground. The Linux ecosystem has become richer and end users have more choices to pick the right solution for their needs.

This is not a book about Linux distributions, nor is it about Linux internals. Here, you will not find any Linux command line reference, but you will find a lot of useful information on how to deal with SQL Server on Linux.

This chapter targets DBAs, developers, and everyone else from the Windows playground. If you are from this group of users and you want to try out SQL Server in Linux land but don't know how to start, this is the chapter for you. If you are a Linux user with experience in your favorite distribution or different kinds of distributions, you can skip this chapter and go straight to the installation part.

In this chapter we will cover the following topics:

When this book was written, SQL Server on Linux supported all major distributions:

The two are not officially listed in the documentation but they work just fine, the same as the commercial versions. If you don't have any Linux experience whatsoever, I recommend Ubuntu or openSUSE. These two distributions will be covered in this chapter, specifically how to install them and prepare for SQL Server installation.

This distribution has a long history (https://www.suse.com/company/history/). The journey started under the name of SUSE Linux in 1994. Later, in 2003, Novel bought SUSE and its brand and trademark. The company recognized the importance of the community and created openSUSE, preserving the open source philosophy. 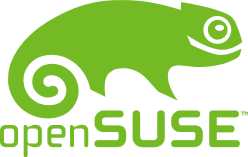 Novel was acquired by The Attachmate Group in 2011 and SUSE became an independent part of the company business. In a nutshell, SUSE has two product lines:

Microsoft officially supports SLES, but openSUSE is in that train also.

Let's start with the installation of openSUSE Leap 42.2, stable release. I will use a Hyper-V virtualization environment, but any other, such as VMWare or Oracle Virtual Box, will be just fine. If you are planning to install a native Linux environment without virtualization, the steps are the same. The installation of ISO can be found at https://www.opensuse.org/. You can mount ISO directly inside your virtual machine, create a bootable USB drive, or burn a DVD. The choice is yours.

The steps for the installation of openSUSE Leap 42.2 are as follows: 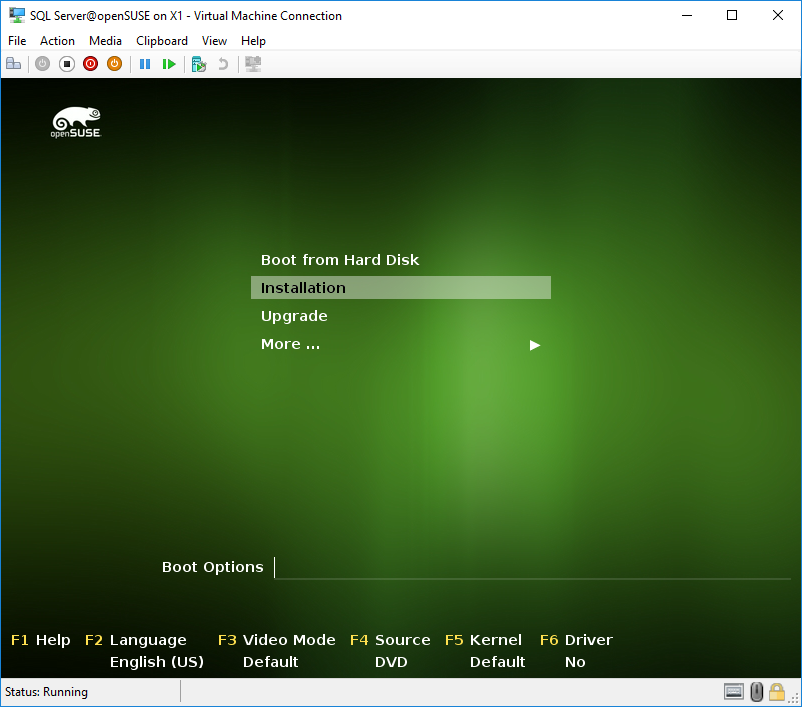 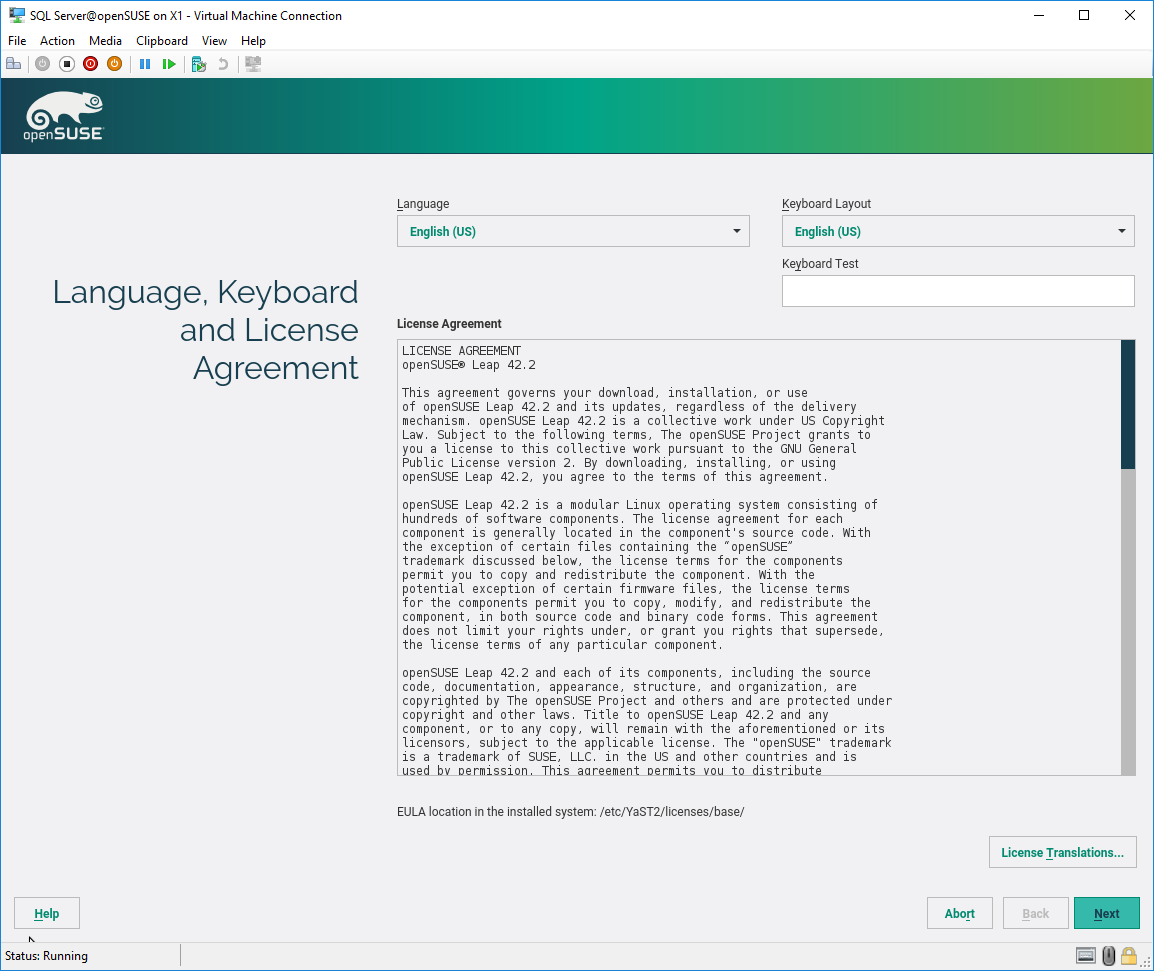 You can click on Next and finish network configuration after the installation procedure (if you decide to configure the network after installation, skip to the disk partition creation part), or you can do it now by choosing the network adapter name and clicking on Edit.

In most use cases, choosing Dynamic Address will be just fine. It will give you IP address, DNS, and Gateway settings. However, in some situations, you will need to manually enter those parameters by selecting Statically Assigned IP Address (In this scenario, you will need to know the DNS setting and gateway parameters to successfully configure network settings manually)

This is an important step if you are planning to use internet access in the following steps. 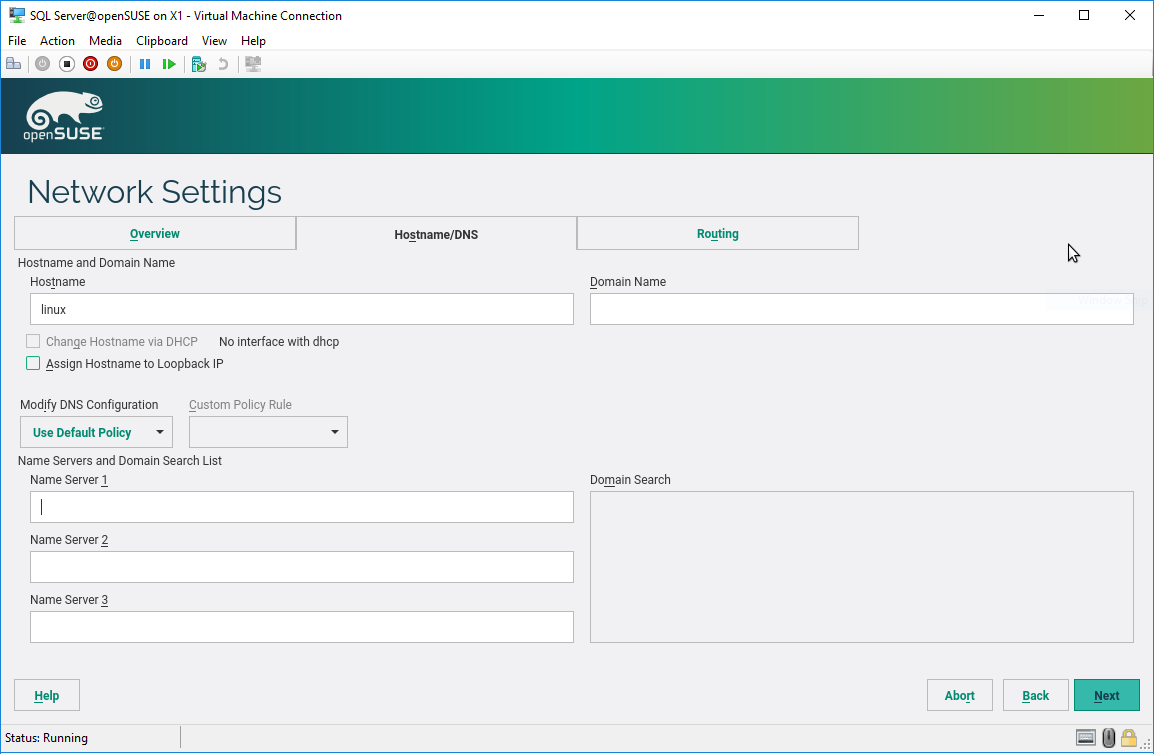 Figure 1-3. Set up the network

A slow internet connection can slow down your installation and you will need separate installation media for the add-ons. If you are an inexperienced Linux user, then I suggest that you leave the network connection and online repositories configuration until after installation is done. 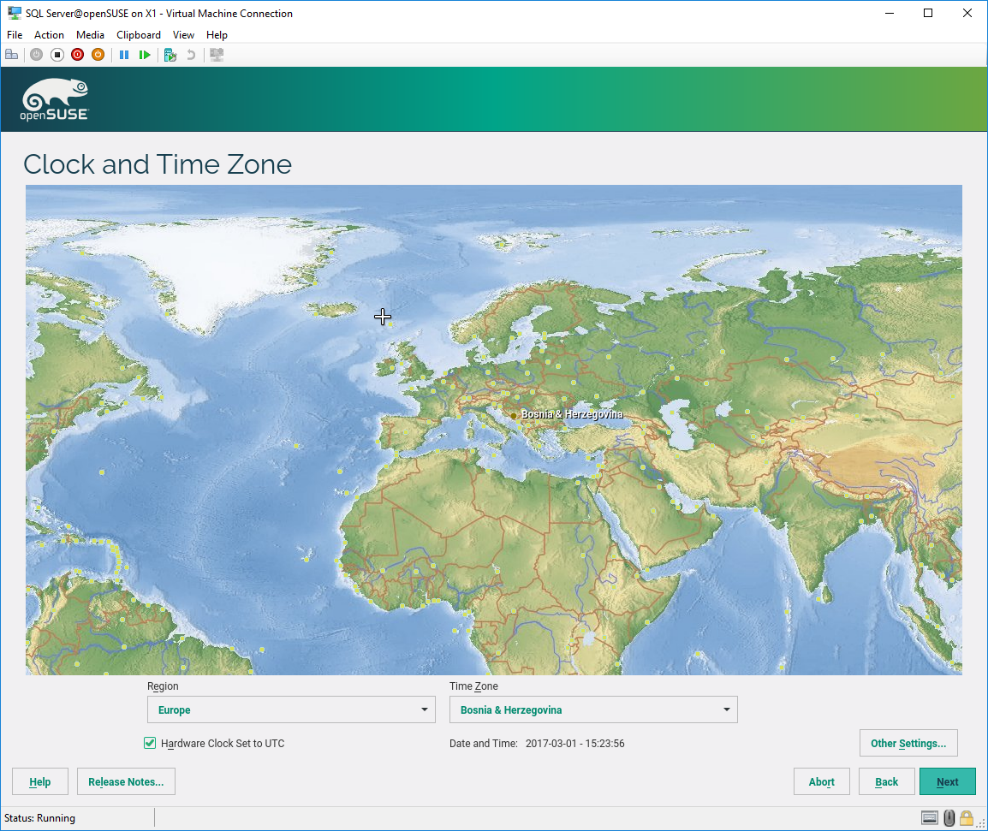 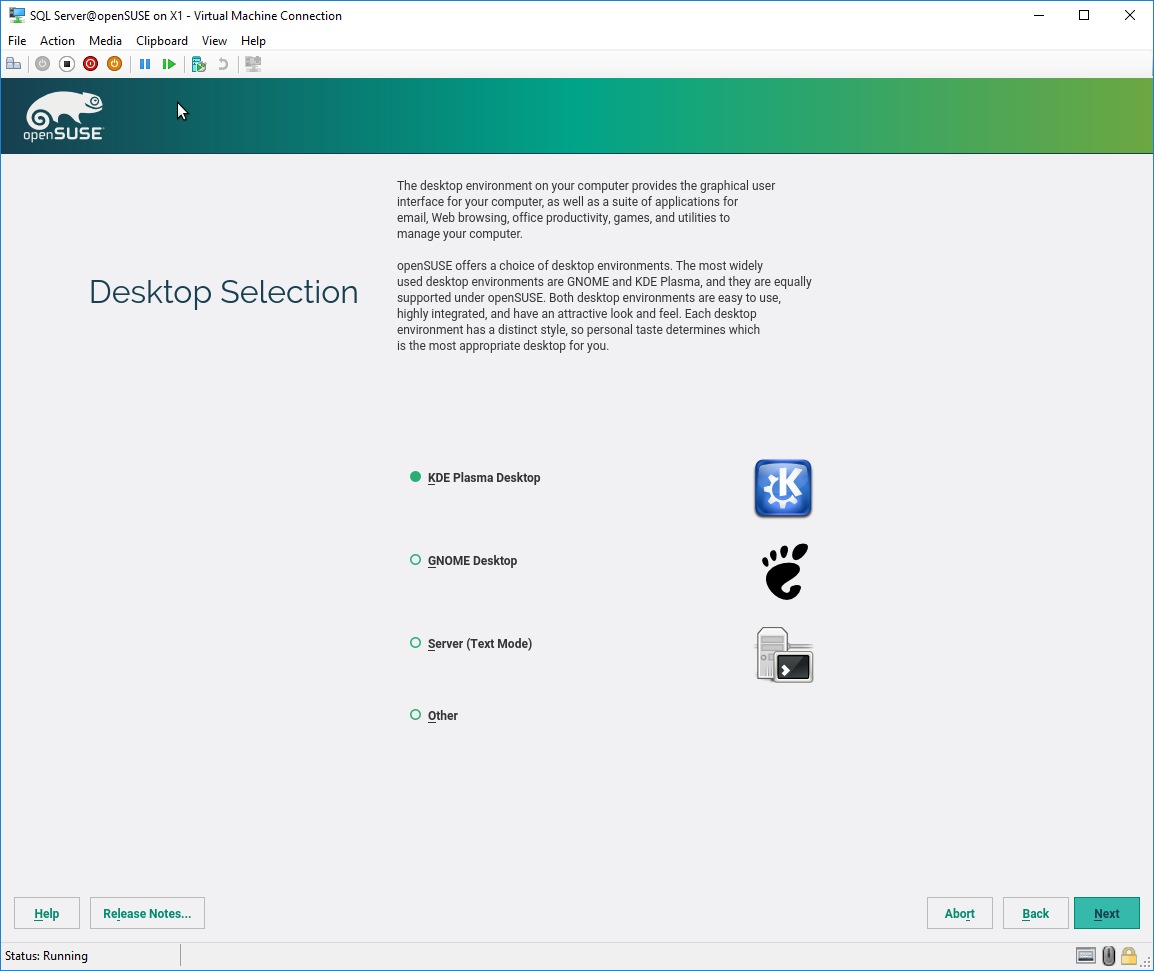 Almost every Linux distribution gives you two options. When it comes to openSUSE, you can pick one of the following:

Let us take a look at each one: 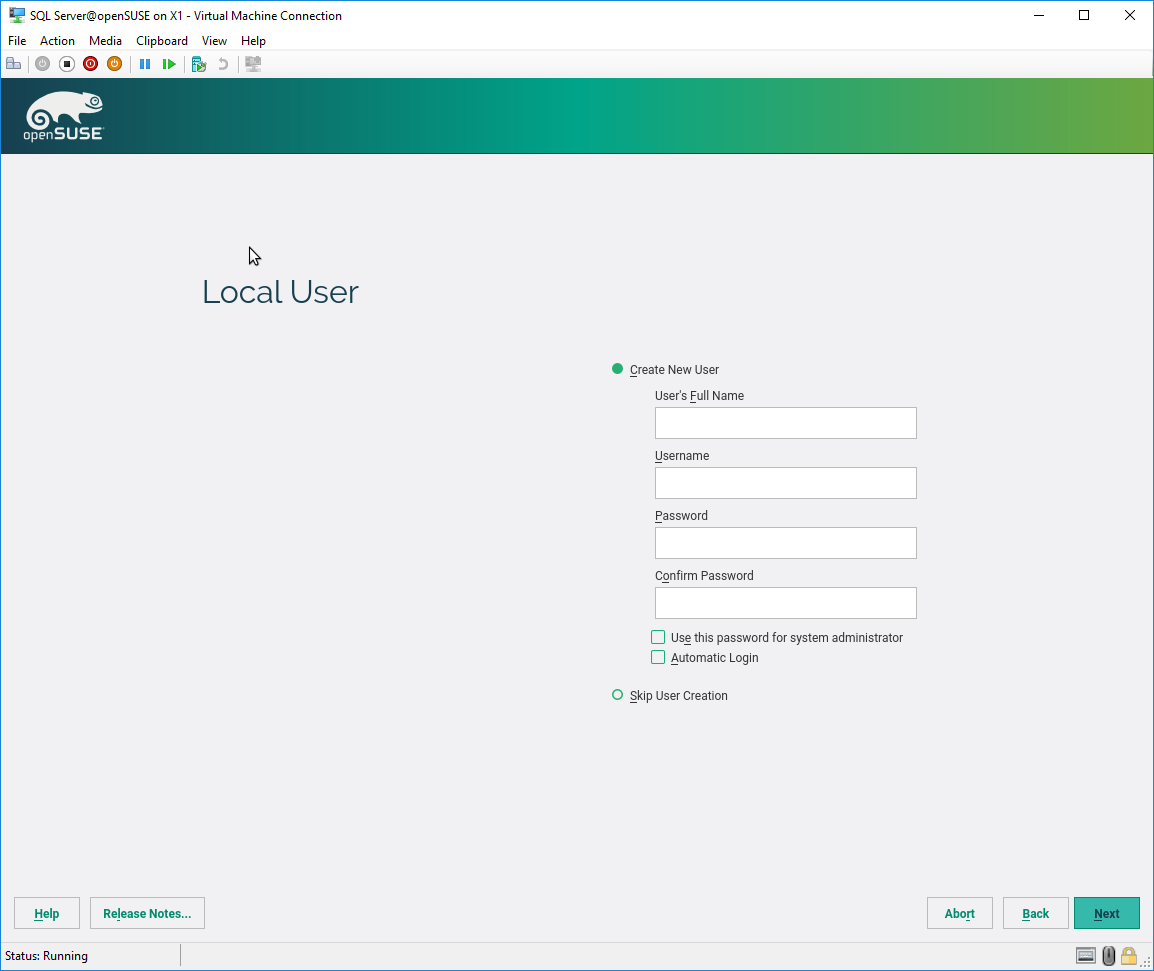 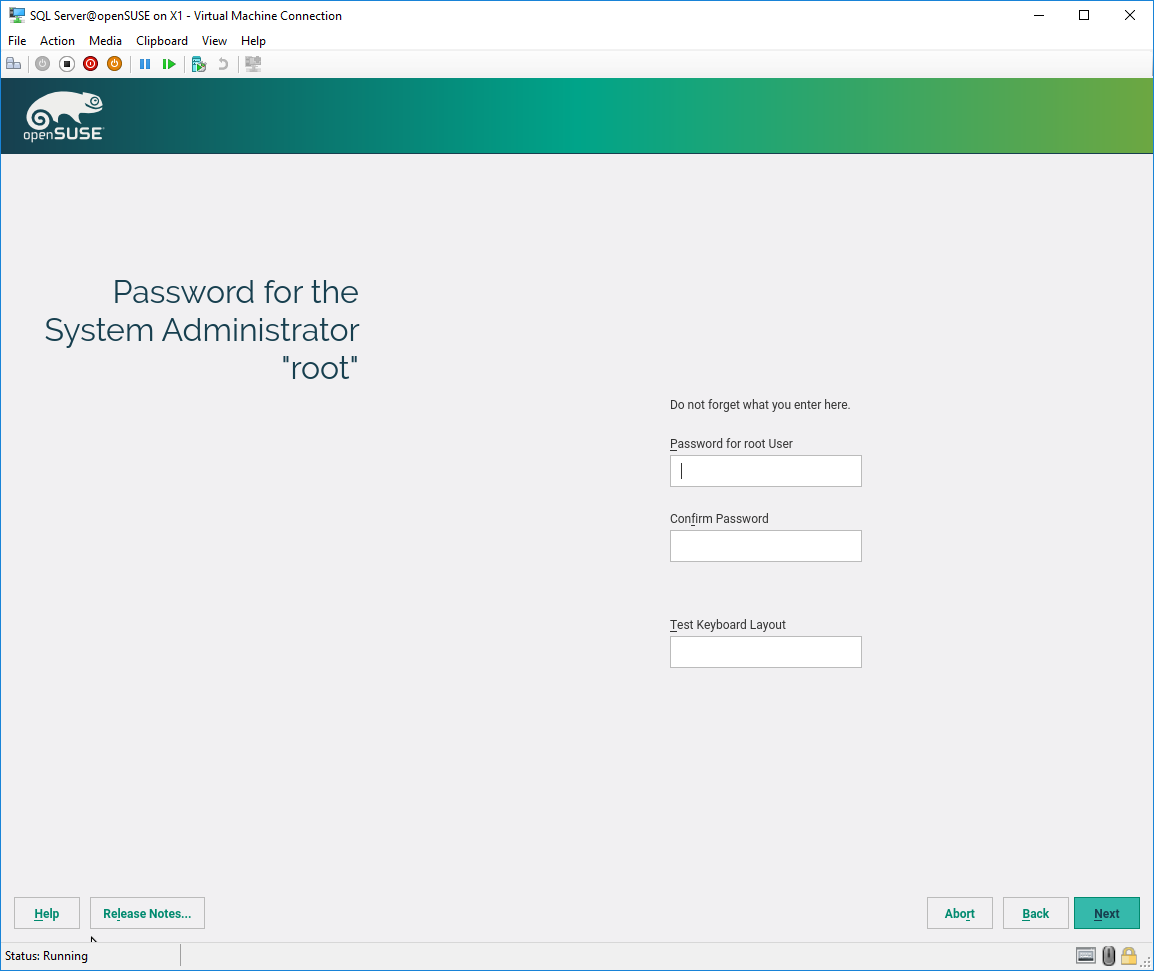 This book is not an openSUSE user guide, so if you are Windows user then you can reference some additional resources, but it will be easy. KDE is something familiar and its GUI is efficient enough to support your exploring through this great distribution. 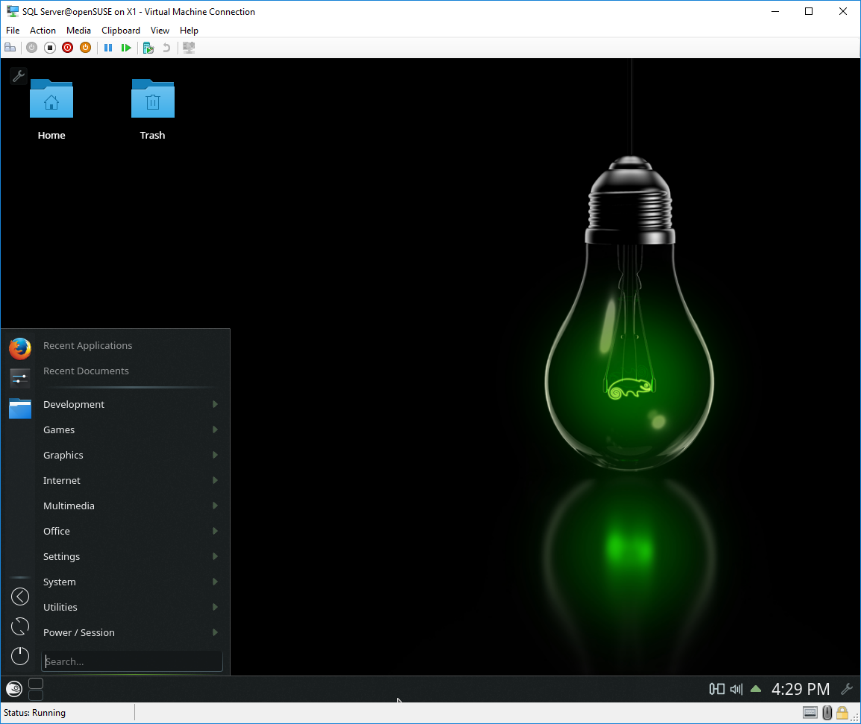 Ubuntu is one of the simplest and most user friendly Linux distributions. It's based on Debian like many other distros whose roots date back to the distant 2004. Ubuntu is, by default, a GNOME (Unity) based environment which is OK. But my opinion is that Windows users will find it a little bit confusing. KDE is much better for them. Kubuntu is official flavor of the Ubuntu based on KDE plasma desktop, started in 2005. From the perspective of SQL Server there is no difference at all because most of our work will be console based. 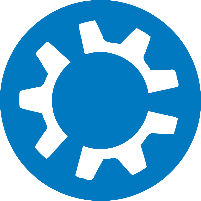 Kubuntu has a different approach than openSUSE. At the same time, Kubuntu is a live distribution, it means that after boot you are directly in the working environment where you can test things. At any time, you can start installation and make permanent changes on your disk. This following screenshot shows how Kubuntu looks after boot procedure. 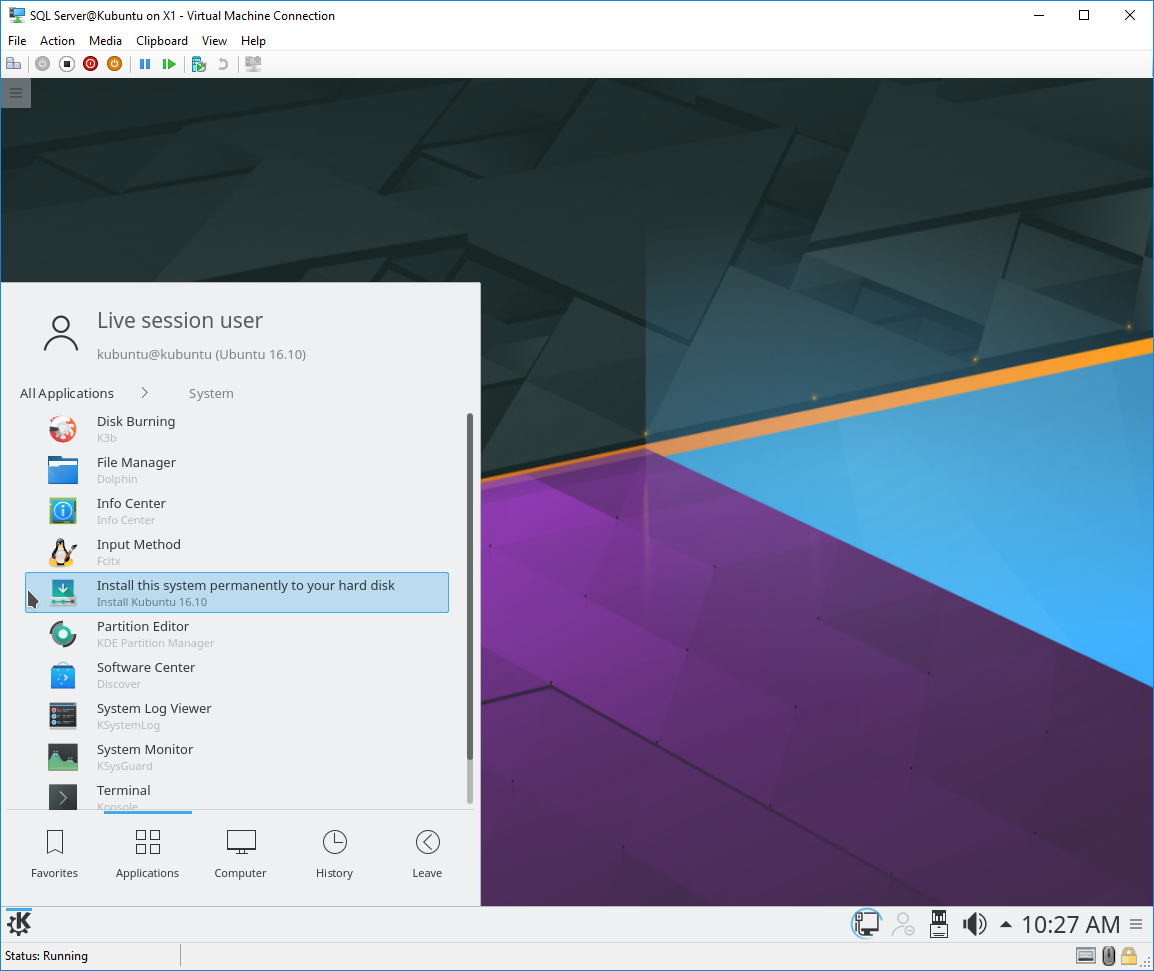 If you are not an adventurous type and you like to keep things simple, then Kubuntu is your kind of Linux distribution.

Now, you can test the environment by running different kinds of applications: Libre Office, Firefox, Thunderbird, GIMP, and so on, or you can click on K menu | Applications | System | Install this system permanently to hard disk. After this step, the process of Kubuntu installation is very similar to openSUSE. The installation procedure involves the following steps: 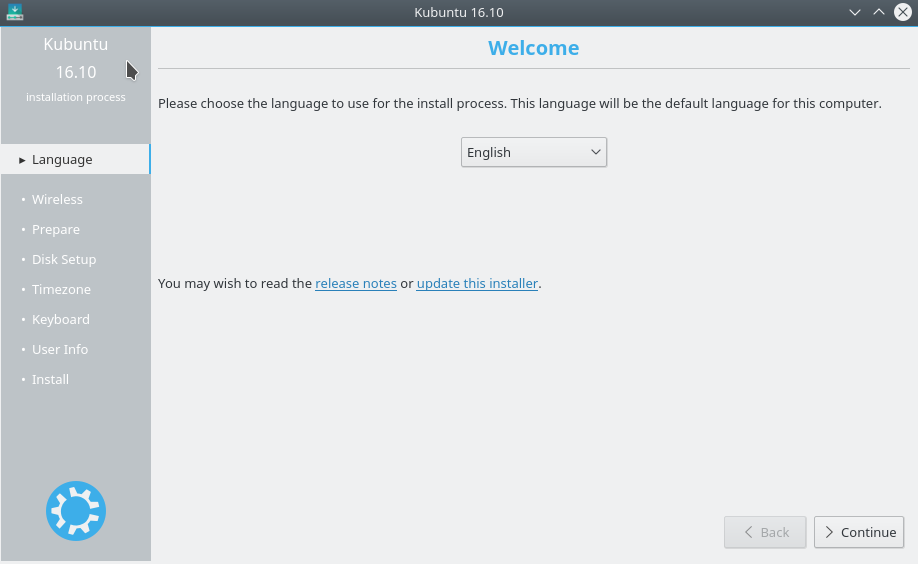 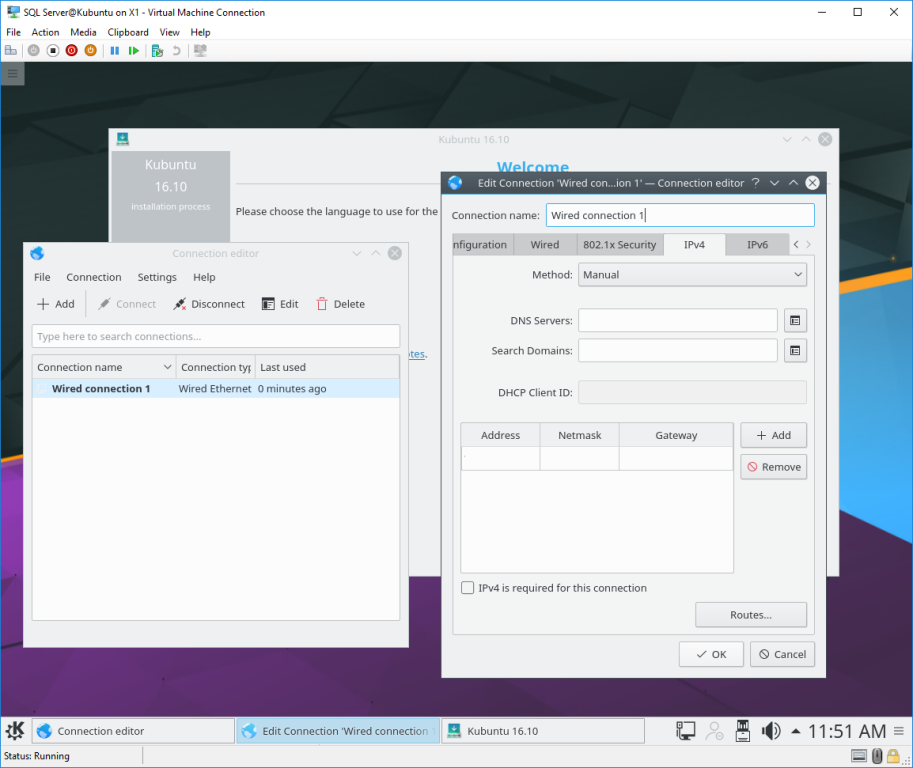 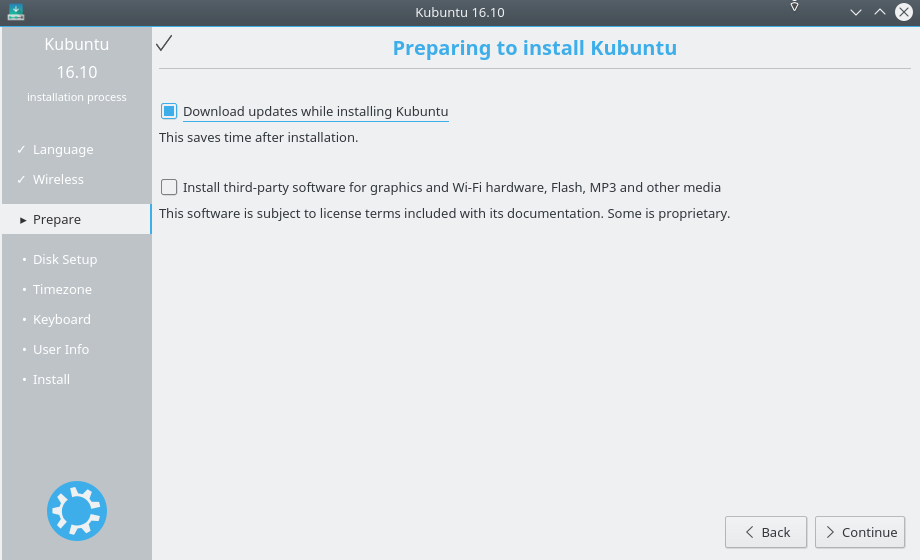 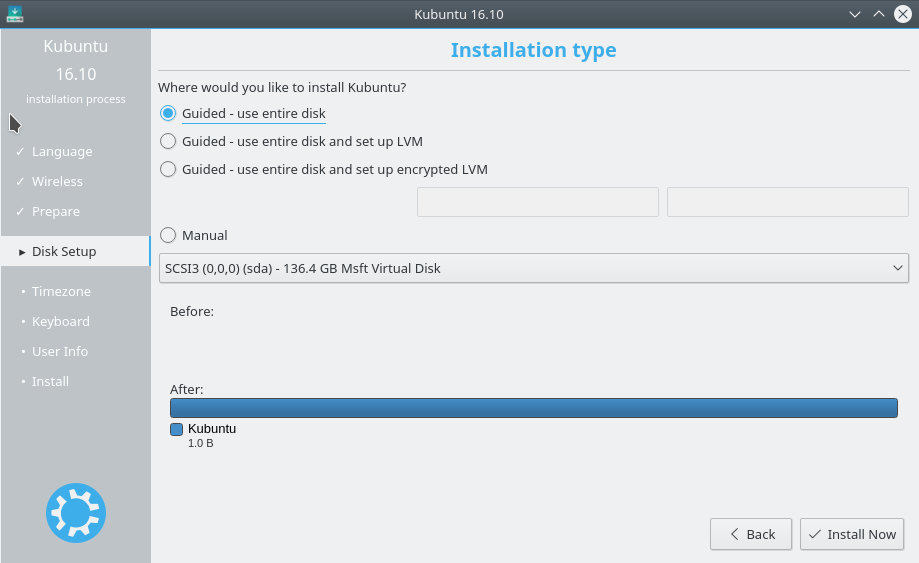 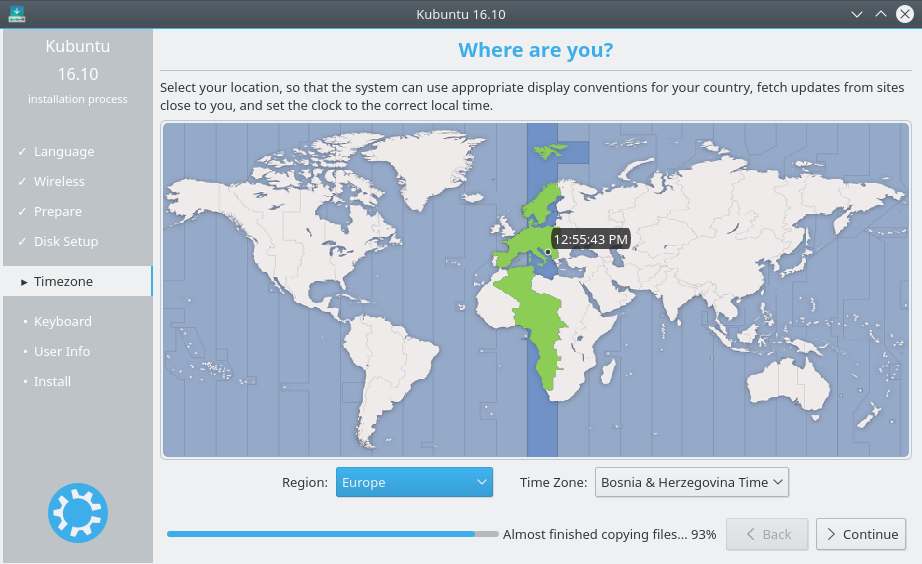 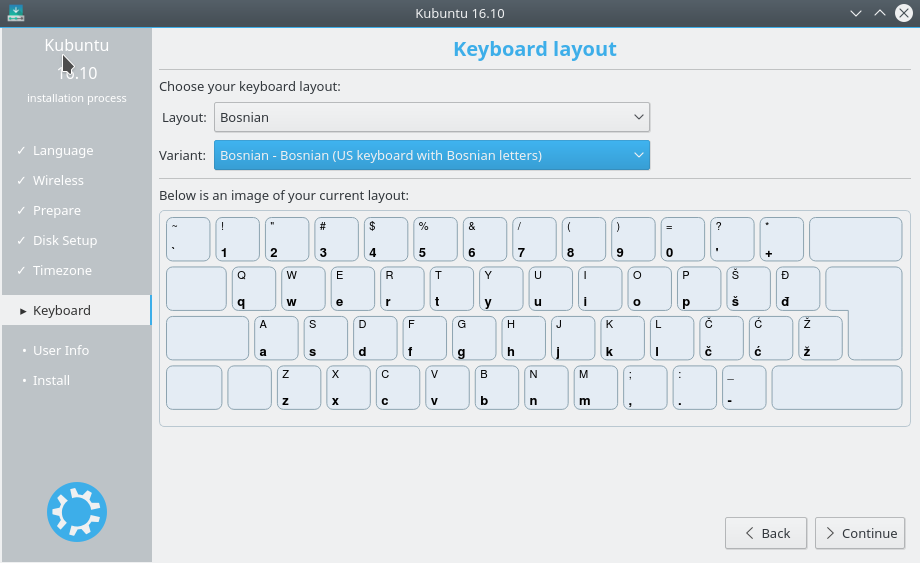 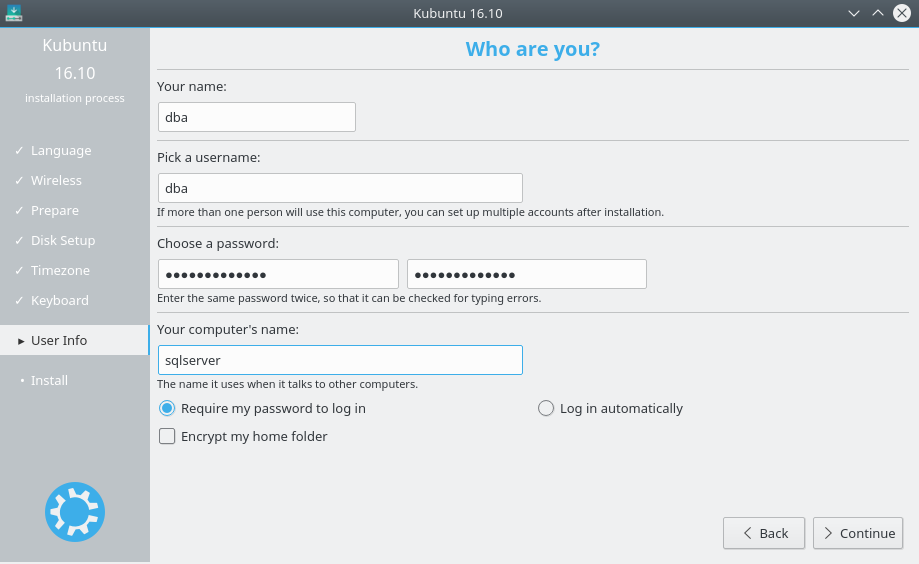 In this chapter, you learned the basics of Linux and how SQL Server has become part of this story. After that, we explained what Linux is and how to install one of the two popular distributions, both supported by SQL Server on Linux. Now, after the initial steps on your working/learning environment, we can dig a little bit deeper. In the next chapter we will see how to install SQL Server on openSUSE, downloading Linux packages and initial security settings.

From what I have read so far it's been helpful

Good material for getting started with SQL Server on Linux. 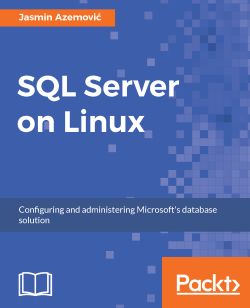