Sencha Charts is a new and powerful library used to create rich and beautiful charts for your Sencha Touch and Ext JS applications. With built-in HTML5, Sencha Charts is optimized for performance and fully supportive of gestures and touch devices to make visualizing data effortless.

First, you will get to grips with charting fundamentals using multiple tools and then engage with the Sencha Charts architecture.

You will then learn how to use out-of-the-box charts, and then create your own custom cartesian, polar, and spacefilling charts to visualize your own data.

Finally, you will see how Sencha Charts compares with other charting libraries for all your data expression needs.

There are two ways to draw in a browser—Scalable Vector Graphics (SVG) and Canvas API. Though VML also exists for older IE browsers, we have excluded it for brevity. All the JavaScript charting libraries use SVG and Canvas API to offer charting capability to their users—for rendering as well as interactions. Understanding them will provide the foundation that is needed to understand Sencha Charts and its capabilities, and more importantly, reasons to use it.

SVG and Canvas are supported by browsers to render graphics. SVG was introduced in 1999 to render vector graphics, which can scale up or down, based on the screen resolution, without any visual distortion, as compared to raster one. SVG works similar to XML where you work with elements, attributes, and styles. SVG is a retained mode graphics model that is persisted in browser memory and we can manipulate it through code. This manipulation leads to automatic re-rendering where the user sees the updated drawing.

Canvas was a new specification brought to us by Apple in 2004. It follows an immediate mode graphics model, where it renders the drawing and forgets it. It does not have a built-in scene graph that SVG has, where it retains the graphics in memory and allows its manipulation. So, to recreate the same drawing, you will have to call the APIs to redraw it on the canvas.

Our sample chart, as shown in the following figure, will have:

In our implementation, we will use a few terms, coordinates, and calculations. They are highlighted in the following diagram: 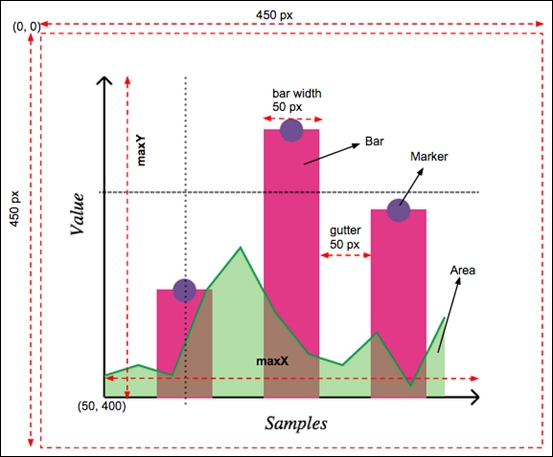 In this section, we will see how we can create the sample chart, described earlier, using Canvas API and SVG. Each of these technologies has their own advantages and context in which they will be used. Their discussion is not in the scope of this book. You may refer to the W3 specifications for their detailed documentation.

All the JavaScript code that we will be writing will go inside the <script> tag.

Let's start by creating some helper methods for our chart, which we will use later to create the actual chart. We will have the Canvas and SVG code side by side for easier comparison.

To create a bar for our column chart, the createBar method draws a rectangle using the rect API of Canvas and the <rect> element of SVG.

Creating a marker on the bar

In our chart, we want to show circular markers on the top of the bars. The createMarker method will help us add markers to our drawing based on the location of its center and radius.

This ends the list of helper methods that we need to create our chart. Let's see how we can use them to create the final output.

Now, we will enhance our script to create the chart in a step-by-step approach. We will start with the axis.

Before we start, we first need access to our drawing surface, either the canvas or <svg> element. Since we have already set the ID on the element, we can use the document.getElementById method to access them. Canvas API, however, requires us to additionally get the drawing context and use it for the drawing.

Once we have access to the drawing surface, we use the createAxis method to create the x and y axes, as shown in the following table:

The following screenshot shows the output with x and y axes. Each axis has an arrowhead as well: 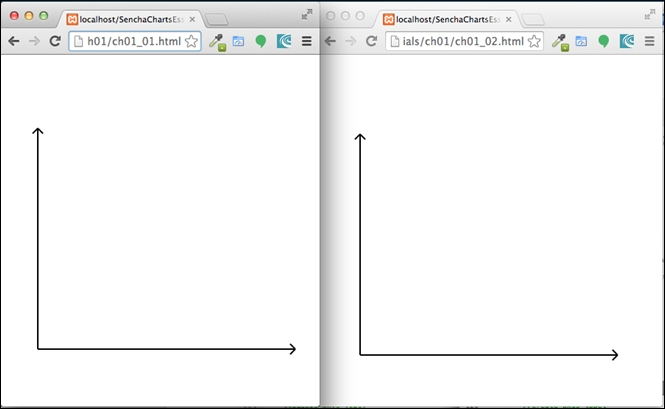 To draw a label on an axis, use the createLabel method, as shown in the following table:

The following output is produced to show the axis label: 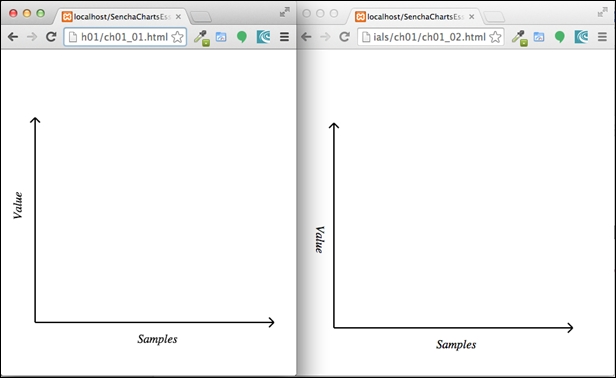 Bar chart with a marker

To create the bar for each sample data, we will use the createBar method and createMarker to show the marker on the top of each bar, as shown in the following table:

You may refer to the second figure in the Introducing the sample chart section for the barWidth and gutter values. The following screenshot shows the output produced from the two applications: 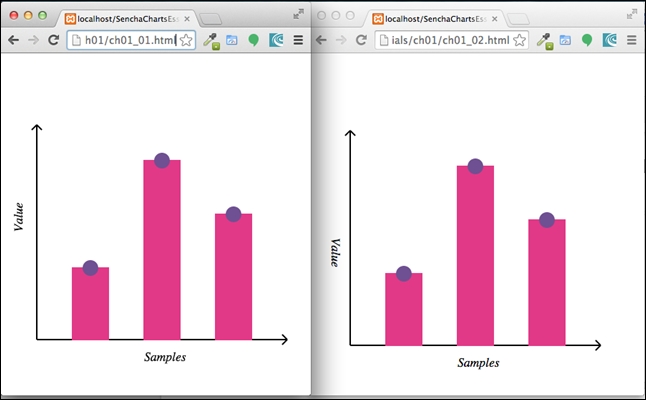 Our next step is to create an area chart. First, we will show the line and then we will fill the area.

The following code shows how to create the area chart with line stroke using a different sample—areaSamples:

We have used path APIs to create the line chart, which we will fill in the next section to make it an area chart. Run the two codes and you will see the following output: 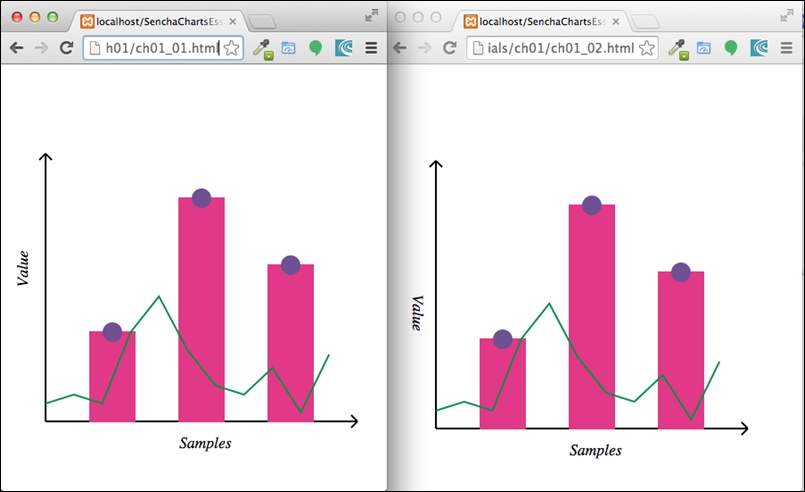 Creating an area chart with fill

Now, let's fill the area under the line chart that we drew earlier to make it an area chart. To fill the area, we will have to end the path at its starting point.

The following screenshot shows the output produced by these two codes: 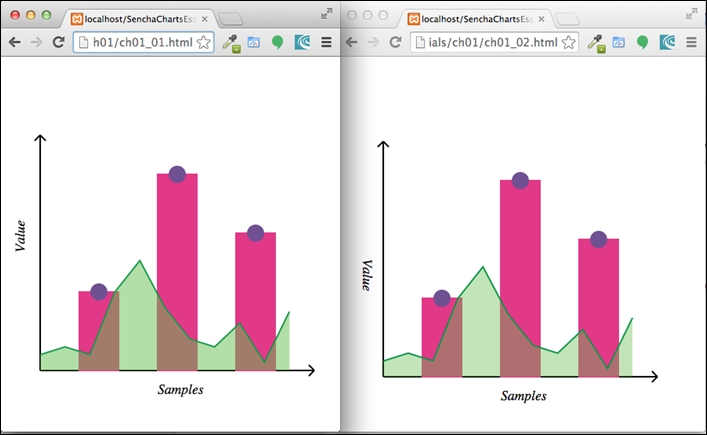 We register the handler for mousemove on the overlay canvas. The handler clears the canvas using the clearRect API so that old lines get cleared before adding the crosshair lines.

In the SVG approach, we will use the same <svg> element. The lines are added beforehand and the handler code moves them to the new location based on mouse position by setting their coordinate related attributes.

There is a check we can make to ensure that we don't show the crosshair if the mouse is outside of the chart area.

The following table shows the code related to crosshair for Canvas as well as SVG:

Here is the output of the two codes showing the crosshair lines when a user moves the mouse in the chart area:

So, we have our final output. Great! But wait! Imagine that you are a charts library developer or someone who wants to add charting capability to your application and has to support different browsers; some of them support SVG (for example, older ones), whereas some of them support Canvas. You can visit http://caniuse.com/ to review specific browser-related support. To ensure that your charts render on both types of browser, you will have to implement your code in SVG as well as Canvas, and then, based on the browser support, your code has to use one of them. The problem becomes even bigger if you have to support old IE browsers that support VML, as the APIs and approaches differ.

This is exactly the kind of problem we can solve using an abstraction called Surface, which is offered by Sencha Charts. Let's look at the Surface abstraction, what mechanism it offers for drawing, and how we can use them to create the same chart that we have created using the SVG and Canvas APIs.

Sencha Charts offers complete charting capability with built-in charts to serve your data visualization needs. While we will look at the different out-of-box charts and their extensions in subsequent chapters, here we will look at their abstraction class—Ext.draw.Surface—which abstracts the underlying API differences across browsers and provides a single consistent API, which renders drawings on SVG, Canvas, or VML based on what the underlying browser supports. The following diagram depicts the Surface class that translates its APIs to the underlying VML, SVG, or Canvas APIs based on the browser support:

To demonstrate the Surface API and its benefits, let's create a project using Sencha Cmd by running the following command:

Sencha Cmd will generate a Main view class inside the app/view/main folder, which is the initial view rendered on the screen. Replace the content of the file with the following code to show the axes:

The preceding code creates a container with a draw component that shows the x and y axes. The draw component contains the surface object that offers drawing APIs.

The following code snippet creates two axes and adds them to the surface. The Surface class internally and uses VML/SVG/Canvas APIs to render the drawing on the screen:

The following screenshot shows the output produced by the preceding code: 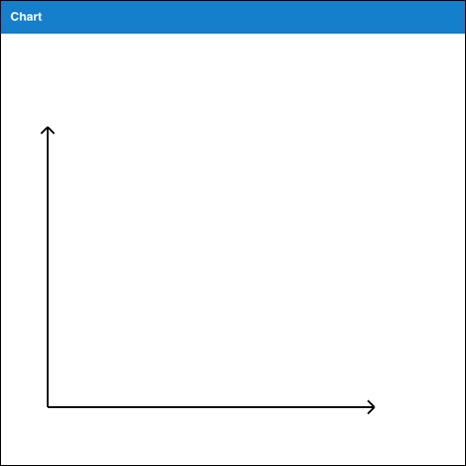 Let's add a member method to the SCE.view.main.Main class to create the axis label. The following method uses the text sprite to create a label:

The createBar member method uses a rectangle sprite to create a bar for our bar chart.

The following member method creates a marker at the specified coordinate:

Now, let's add the following code to the afterRender method, before the this.callParent() call, to draw the axis label and bars with markers:

Refreshing the URL in the browser, the code will produce the following output: 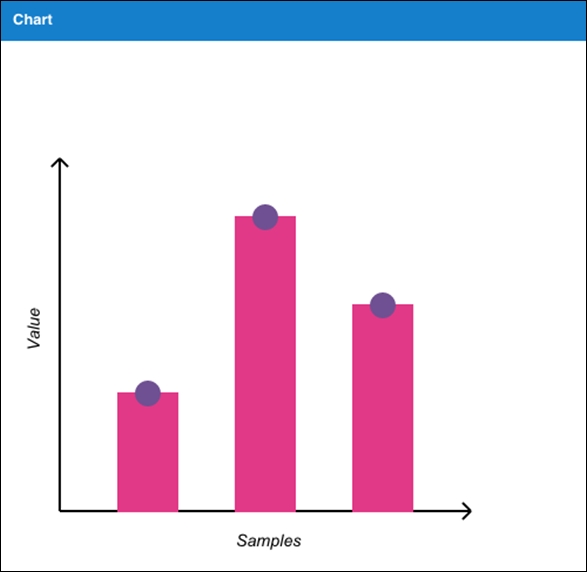 To create the area chart, add the following code to the afterRender member method before the this.callParent() call:

The following screenshot shows the output produced after the preceding code is added: 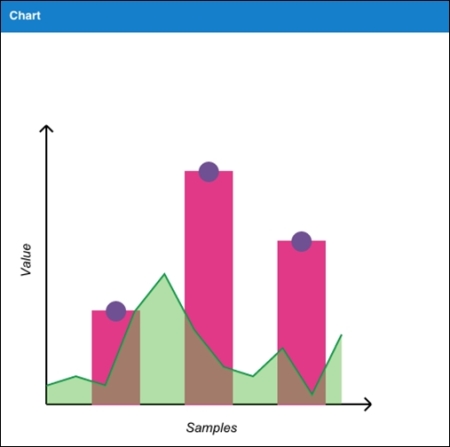 The last item is creating the crosshair. The following code adds two lines to the overlay surface and then the mousemove handler changes its position by setting its path attributes:

The overlay surface sits on top of the main surface that we used earlier to draw the axes, bar, area chart, and so on. We will discuss in more detail the different types of surfaces when we get to Chapter 3, Sencha Charts Architecture. 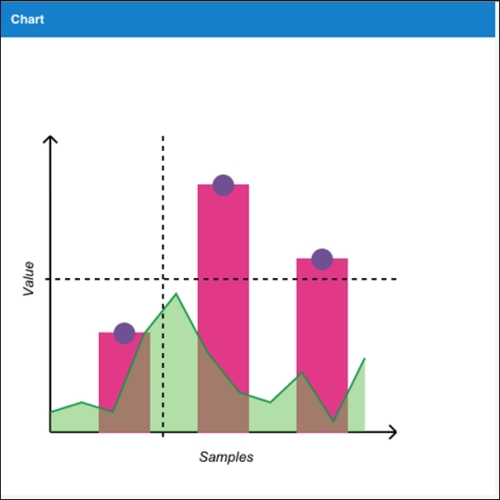 In this chapter, we reviewed the supported browser drawing formats—Canvas and SVG—to create a drawing and we used them to create a basic chart. These are basic building blocks of any JavaScript charting library, such as Sencha Charts, FusionCharts, HighCharts, amCharts, and so on. In the second half of the chapter, we looked at the issues that these different APIs present when it comes to creating charts that work on different browsers and platforms, and how we can use the Surface APIs of Sencha Charts to address them. In the subsequent chapters, we will build on top of these fundamentals to understand more about Sencha Charts. 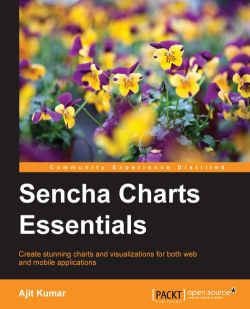