This book will serve as a practical companion for you to learn about common vulnerabilities when using RESTful services, and will provide you with an indispensable knowledge of the tools you can use to implement and test security on your applications. It will cover the fine details of setting up RESTful services such as implementing RESTEasy and securing transmission protocols such as the OAuth protocol and its integration with RESTEasy. Furthermore, it also explains the implementation of digital signatures and the integration of the Doseta framework with RESTEasy.

With this book, you will be able to design your own security implementation or use a protocol to grant permissions over your RESTful applications with OAuth. You will also gain knowledge about the working of other features such as configuring and verifying HTTP and HTTPS protocols, certificates, and securing protocols for data transmission. By the end of this book, you will have comprehensive knowledge that will help you to detect and solve vulnerabilities.


ChapterÂ 1.Â Setting Up the Environment

We extend you a very warm welcome to the first chapter of our journey. Let's give you an idea of what you will achieve here. After reading this chapter, you will have the basic and stimulating knowledge you need to set up a development environment to work with RESTful web services. Then, you will familiarize yourself with the development of a very basic project related to it. In addition, by the end, you will have a very clear idea of how to create applications using RESTful web services and how you can achieve this. This chapter will give you the information you need to work with web services of this kind in a very easy and comprehensive way.

First, we must obtain our work tools so that we get our hands into code. Tools specified here are used around the world, but you are free to choose your tools. Remember, "Tools do not make the artist". It doesn't matter if you use Windows, MAC OS X, or Linux; tools are available for every OS.

Let's explain briefly what each tool is for. We will develop the examples using Eclipse as our IDE, JBoss AS 7.1.1.Final as our application server, Maven to automatize the build process, and SoapUI as a tool to test the functionality of web services that we will create. In addition, we suggest that you should install the latest version of JDK, which is JDK 1.7.x. For help, we have obtained and included some links that you need to use to get the software to implement the first example. Each link gives you more information about each tool, which can be profitable as you learn something about each one if you don't know about them already.

The following tools have to be downloaded:

Creating the base project

In order to make the process of building our sample project easier, we will use Maven. This wonderful software will create a base project at the blink of an eye, and our project can be easily compiled and packaged without depending on a specific IDE.

Maven uses archetypes for a specific kind of project. The archetypes are project templates that have been previously created; they allow us to create all kinds of applications from Java desktop applications to multimodule projects, where the EAR can contain several artifacts such as JAR and WAR. Its main objective is to get users up and running as quickly as possible by providing a sample project that demonstrates many of the features of Maven. If you want to learn more about Maven, you can find more information by visiting http://maven.apache.org/.

When we execute this command line in a terminal, we will obtain all available archetypes in Maven's repository. So, let's look for the archetype we need in order to create our web application; its name is webapp-javaee6, and it belongs to the group org.codehaus.mojo.archetypes. Also, we can search through it using a number that represents its ID; this number is 557, as shown in the following screenshot. We recommend that you search by the name as the numbers are likely to change because some other archetypes may be added later:

Several questions will appear; we must provide the respective information for each question. Maven will use this information to create the archetype we selected before, as shown in the following screenshot: 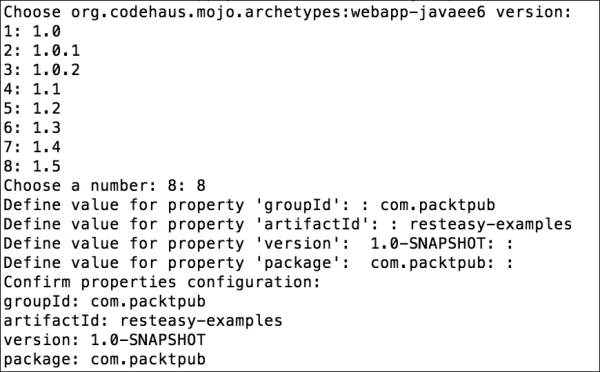 As you have probably noticed, each question asks you to define a property, and each property is explained as follows:

Class names and package names together shape the class's full name. This full name allows the class names to be identified in a unique way. Sometimes, when there are several classes with the same name, the package name helps to identify which library it belongs to.

We should see the project in the IDE, as shown in the following screenshot: 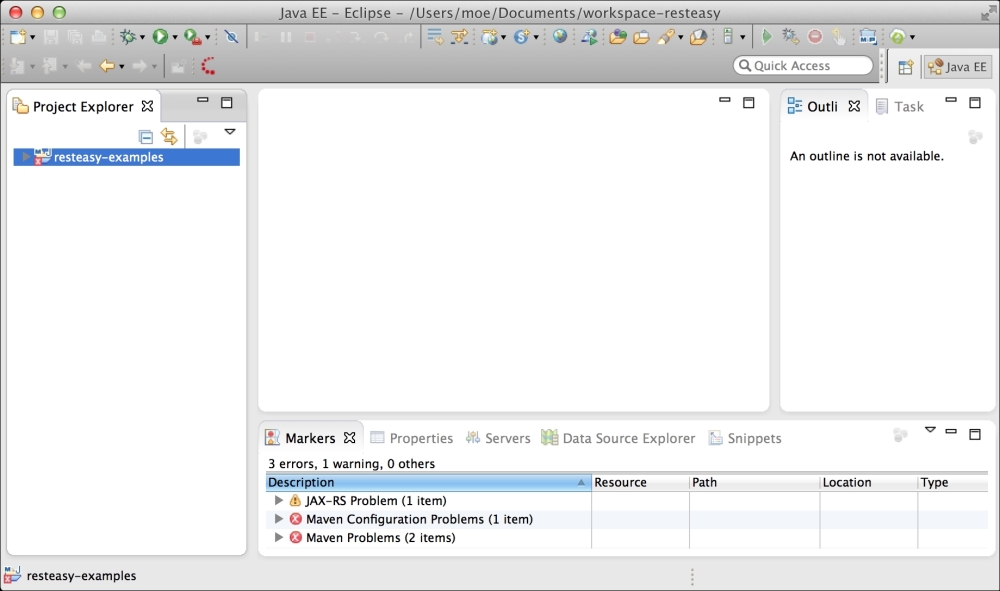 Before moving on, let's fix the problems that have occurred in the file pom.xml.

The error shown in the following code is related to a bug that comes from Eclipse and Maven integration. In order to fix this, we have to add the <pluginManagement> tag after the <build> tag.

You can download the sample code files for all Packt books you have purchased from your account at http://www.packtpub.com. If you purchased this book elsewhere, you can visit http://www.packtpub.com/support and register to have the files e-mailed directly to you. Also, we highly suggest obtaining the source code from GitHub available at https://github.com/restful-java-web-services-security.

This will fix the error, and now we only need to update Maven's configuration in the project, as shown in the following screenshot: 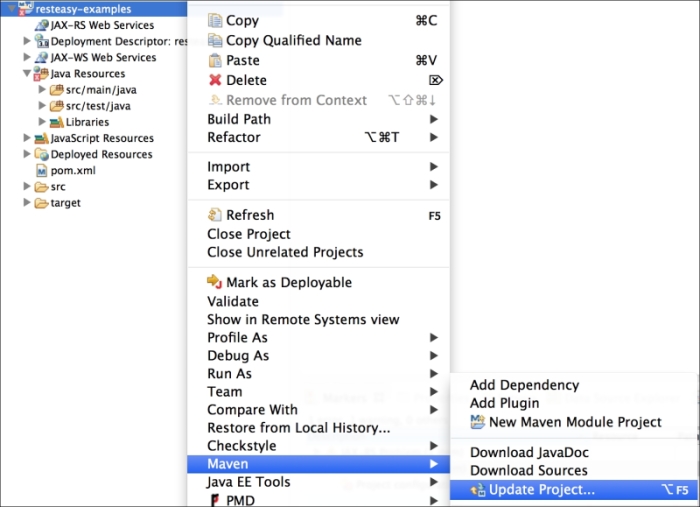 After refreshing the project, the errors should go away because when we update Maven's configuration we are actually updating our project's dependencies, such as missing libraries. Through this, we will include them in our project and errors will disappear.

Inside the src/main/webapp path, let's create the WEB-INF folder.

Now, inside the WEB-INF folder, we will create a new file named web.xml with the following content:

This file is very useful when you are securing your applications; this time, we will create it without any configuration. For now, the /WEB-INF folder and the web.xml file only define the structure of the web application.

Now that we have our development environment all set up, it is time to get your hands dirty and write the first RESTful web service. As we are using JBoss, let's use the RESTEasy implementation for JAX-RS. We will develop a very simple example; let's imagine you want to implement a service to save and search for people's information.

First, we create a simple Person domain class that uses JAXB annotations. JAXB marshals/unmarshals objects between XML and Java. For this example, we'll store these instances in an in-memory cache instead of a database. In JEE, this typically represents a table in a relational database, and each entity instance corresponds to a row in that table, as presented in the following code:

Next, we create a new class called PersonService in the com.packtpub.resteasy.services package. This class will have two methods; one to register a new person and another to search for people by ID. This class will store people using an in-memory map cache.

The service will have the following implementation:

The @Path annotation defines the path in the URL that will be available on the functionalities that have been written within this class. The method annotated with @Post indicates that it should make a HTTP POST request. Furthermore, it is annotated with @Consumes and uses the application/xml value; this means that the POST request will be performed with a string in XML format, containing the information of the person to be saved. On the other hand, to find a person from its ID, you must make an HTTP GET request. The URL must indicate the ID the same way as indicated by the @Path annotation on the method. The @Produces annotation indicates that we will get the response in XML format. Finally, notice that the parameter ID, as indicated in the @Path annotation, is used as an argument of the method using the @PathParam annotation.

Finally, we write a class that will extend the Application class and set the service we just created as a singleton. So, the information won't get lost in every request, and we will keep it in memory as follows:

Note that as we have mapped our entity using JAXB, our methods consume and produce information in the XML format.

In order to deploy our application in JBoss, we should add a dependency in the pom.xml file. This dependency must reference to the JBoss plugin. We have to change the generated artifact name in pom.xml. The default value for this is the artifactId file, followed by the version; for example, resteasy-examples-1.0-snapshot.war. We will set it, so we will use just the artifactId file; in this case, resteasy-examples.war. All of these configurations must be included, modified, and implemented in pom.xml, as shown in the following piece of XML code:

You should change the value of the jbossHome property for the path of your JBoss installation. After this, we will use the command terminal; head to the project's directory, and type mvn jboss-as:run. If you make any change on the code after the command has been executed, then you should use the following command in order to see the changes:

Run and redeploy are the goals of this plugin. If you want to know more goals about this plugin, you can visit https://docs.jboss.org/jbossas/7/plugins/maven/latest/). This will compile all project classes again; it will then be packaged in order to create the .war file. At the end, the modifications will be deployed on the server. If everything is okay, we should see a message in the terminal saying that the deployment has been done successfully, as shown in the following screenshot:

The source code of this chapter is available on GitHub at the following location:

At this moment, we will test the functionality we just created. We will use SoapUI as our test tool; make sure you use the latest version, or at least the version equal to or greater than 4.6.x because this version offers more features to test the RESTful Web services. Let's start by performing the following steps:

If you restart JBoss or deploy the application again, all data will be lost. Before searching for people's information, you must first save the data.

In this chapter, we created our first functional applicationâ€”something like a hello world example but with a bit more functionality close to the real world.

The essential part we covered in this chapter is to familiarize ourselves with the tools we will use. In later chapters, we will assume that these concepts are already clear. For example, we will move forward step-by-step when using SoapUI as this is a tool that will facilitate the task of testing the functionality that we will be developing. This way, we will avoid the task of writing code for web service clients.

Now we are ready to review the next chapter, which contains some security models that Java provides. We will understand each one of them and learn how to implement them. 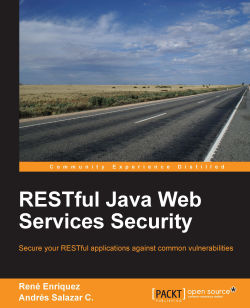