AngularJS is an open source JavaScript framework, built to create dynamic web applications using HTML, JavaScript, and CSS. AngularJS has many advanced features that can be used to leverage responsive application development.

Responsive Web Design with AngularJS follows a detailed step-by-step approach to explain each key concept, with sufficient code and examples. This book will teach you how to implement dynamic routing, responsive custom directives, and breakpoints for your web page, followed by a section on debugging and testing.

By the end of the book, you will be able to develop and design exciting single page applications with AngularJS and make the applications responsive on different devices. With ample screenshots and code offering you a detailed insight, this book will ensure your success in developing responsive applications.

In this chapter, you will learn about the need for responsive web design, explore the building blocks of a single page application. At the end, we will discuss some features of the AngularJS library with a quick look at their syntax and understand their role in responsive web application development.

In the current age of digital revolution, there are many devices with different screen sizes. This increases an additional layer of complexity for web development. A web application now has to present a similar experience across different devices. To solve this problem, it needs a design solution .This solution is termed as responsive design. There are also some key areas in the responsive design approach. They are as follows:

What is single page web application?

In a single page application (SPA) architecture, the presentation logic is moved to the client side. SPA can redraw a part of the UI on a page without a complete round trip or reload of a window.

The following diagram shows the building blocks of a single page web application:

Templates can be thought of as placeholders for styling and structure that will be modified by the application's code. This way the content to be displayed can be generated dynamically by the app, while the presentation remains static. In web application development, domain templating is a very well known concept and has been used by developers. In a more specific sentence, we can define a template as any document or file with a presentation format that can be created initially and does not have to be recreated for subsequent use.

To know more about the latest developments in templating, visit http://www.html5rocks.com/en/tutorials/webcomponents/template.

The partial components is similar to a template that can be created once and reused many times. The only difference between partial and template is that partial is the smallest unit of a reusable chunk of code.

The router components is used for correctly navigation to a view based on the request. In single page application, the routing logic is present in the client side.

The controller components is the owner of a part of a page. It provides a scope to be used by the specific part of the page. In single page application, controller is used to share objects or create common behavior in terms of event callback functions.

Real-time communication introduces the two-way request-response mechanism. Technologies like WebSocket, Server-Sent Event (SSE), and WebRTC made this possible. In single page application, real-time communication is used to share the load between the server and client. Instead of polling from the client side, now push updates from the server side can now be used to sync the application.

Local storage provides a client-based storage system to cache the data in the browser. This really helps by reducing the number of HTTP requests to the server. In single page application, the client first checks the data required by a request in the local storage and if it is not present in local, then it makes a call to the server.

In the previous section, we explored responsive and single page applications, two modern features of a web application. In this book, we will develop an SPA with responsive design using AngularJS, which is a perfect fit for SPA development as all the characteristics of SPA are present within the library. In the next section, we will quickly go through these features.

What is an AngularJS framework?

AngularJS is a complete client-side solution for web application development and is maintained by Google Inc. The AngularJS framework is one of the best frameworks to create single page application. AngularJS follows declarative programming similar to an HTML element declaration. This makes AngularJS simple.

The AngularJS library is a perfect fit for SPA development. AngularJS is more like a Model View Whatever (MV*/MVW) design pattern instead of Model view Controller (MVC).This means that an AngularJS application can be developed with the model and view features.

Exploring the features of AngularJS

In this section, we will quickly go through some of the important features provided by the AngularJS library. The goal of this section is to understand each feature with its appropriate syntax.

Some of the features that we are interested in to build responsive web applications are listed as follows:

Using the AngularJS module feature, an independent code section can be created. A module can be easily detachable. This module helps with better code management and it helps to work in large teams. Loose coupling allows developers to create their parts of the project independently. The angular.module() method is used to create a module. The syntax to create an AngularJS module is as follows:

In the above code, the angular.module() function takes two parameters: the first is the module name and second is the array of dependent module. The parameters used to create a module are as follows:

To learn more about the AngularJS module, visit https://docs.angularjs.org/guide/module.

Some parameters used in the preceding syntax to create a controller section are as follows:

To learn more about the AngularJS controller, visit:

The details of the preceding code are as follows:

To learn more about the AngularJS router provider, visit https://docs.angularjs.org/api/ngRoute/provider/$routeProvider.

AngularJS provides scope-based data binding from HTML, DOM, and JSON data. Data binding happens in two different steps: compiling and linking. In the compile phase, the HTML file is converted into a JavaScript function. In the linking phase, the real data is linked to the HTML element. Angular provides two-way binding between the view and model features by synchronizing JavaScript objects and HTML elements.

The following diagram shows the process of data binding, where template is compiled once and view is generated by linking to model. This shows the tight coupling between the model and view features where any change in either of them is in sync. 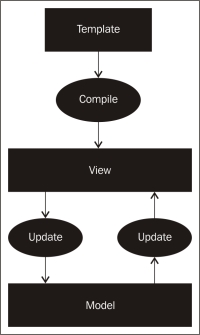 Expressions in AngularJS are like JavaScript statements that can be evaluated at runtime. These expressions are represented by double curly braces. They involve the JavaScript value object whose exact value arrives while linking the time of model objects. The following code shows the syntax of using AngularJS expression:

An example of AngularJS expressions are as follows:.

One-time binding of the scope variable value was introduced in AngularJS version 1.3.

The details of the properties shown in the preceding code are as follows:

To find out more about creating custom directives, visit https://docs.angularjs.org/guide/directive.

When we view web pages through our browser, the browser sends a user agent string to the server. This string provides information like browser and device details. Reading these details, the browser can be redirected to the appropriate view. This method of reading client details is known as browser sniffing.

The browser string has a lot of different information about the source from where the request is generated. The following diagram shows the information shared by the user string: 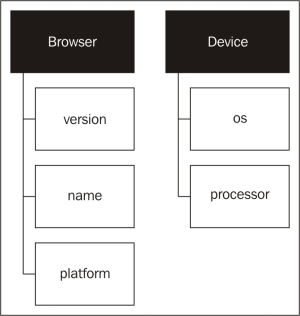 Details of the parameters present in the user agent string are as follows:

AngularJS has features like providers or services which can be most useful for this browser user-agent sniffing and a redirection approach. An AngularJS provider can be created that can be used in the configuration in the routing module. This provider can have reusable properties and reusable methods that can be used to identify the device and route the specific request to the appropriate template view.

CSS3 brings a new horizon to web application development. One of the key features is media queries to develop a responsive web application. Media queries uses media types and features as deciding parameters to apply the style to the current web page.

An external style sheet can be downloaded and applied to the current page based on the media type with the HTML link tag. The following code uses the link type in conjunction with media type:

Conditional styles can be applied to a page based on different features of a device. The features that are supported by CSS3 media queries to apply styles are as follows:

In this section, we will explore more about the screen width. We will explore how AngularJS can help you use CSS3 media queries for a responsive application development. There are huge number of devices with different screen sizes present on the market, so we will focus on the most commonly used devices. The following diagram shows the different screen sizes of most commonly used devices such as mobile, desktop, and tablet: 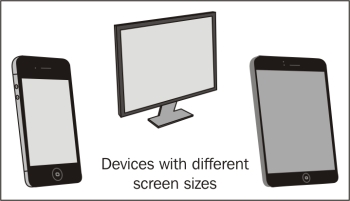 What are we building?

In the following chapters, we will build a small responsive SPA to understand the helpful features of AngularJS. The plan of action to develop this application is as follows:

In this chapter, you learned about responsive design and the SPA architecture. You now understand the role of the AngularJS library when developing a responsive application. We quickly went through all the important features of AngularJS with the coded syntax. In the next chapter, you will set up your AngularJS application and learn to create dynamic routing-based on the devices. 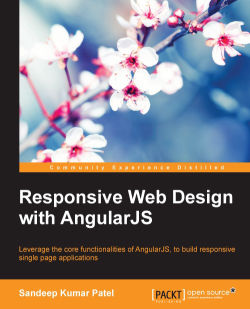