Data exploration and visualization is vital to Business Intelligence, the backbone of almost every enterprise or organization. Redash is a querying and visualization tool developed to simplify how marketing and business development departments are exposed to data. If you want to learn to create interactive dashboards with Redash, explore different visualizations, and share the insights with your peers, then this is the ideal book for you.

The book starts with essential Business Intelligence concepts that are at the heart of data visualizations. You will learn how to find your way round Redash and its rich array of data visualization options for building interactive dashboards. You will learn how to create data storytelling and share these with peers. You will see how to connect to different data sources to process complex data, and then visualize this data to reveal valuable insights.

By the end of this book, you will be confident with the Redash dashboarding tool to provide insight and communicate data storytelling.

But without proper analysis and usage, this data just occupies space (S3s, self-hosted Hadoop clusters, regular RDBMS, and so on) and resources (someone must maintain the servers; otherwise, the data is lost).

The ultimate goal is to try to make the data work for the benefit of the company.

Data analysis rapidly expands beyound the domain of enclosed research departments and penetrates almost every department along the company's verticals.

The trend is that data insights move from business-supporting to business-generating roles.

Data challenges experienced by companies on a daily basis

Let's have a look at an abstract example of a social gaming company and it's use of data:

As you can see, all the different departments rely on data and have their own specific data needs.

We can also note that if we treat each need as aÂ building block,Â we can reuse them across departments.

But data is not only about numbers. People like to get a real feel, and that's where visualization can come in handy, especially when there is a need to discover trends or spot anomalies. Most of the time, it's much easier to track everything through charts and graphs, even if they represent an abstract trend.

Needless to say, each visualization forms a building block too.

All the preceding points can be joined by a dashboard (or, in most cases,Â dashboards), where every department has at least one of their own.

Moreover, good visualizations, which are tied together to make an understandable and meaningful user journey through the data (like dashboards), are almost mandatory for data-driven decision making (instead of decision making based on a gut feeling).

This data usage pattern is not unique to social gaming companies. In fact, you can easily define a starter pack of KPIs/metrics that are crucial to track the growth of any company.

Suppose we want to provide our product department with aÂ Redash usage dashboard (based on real Redash usage data), that consists of several metrics:

The preceding diagram is a Usage chart. Usage can be any form of interaction with Redash. This chart shows us the total amount ofÂ interactions with Redash per day over a 30-day period: 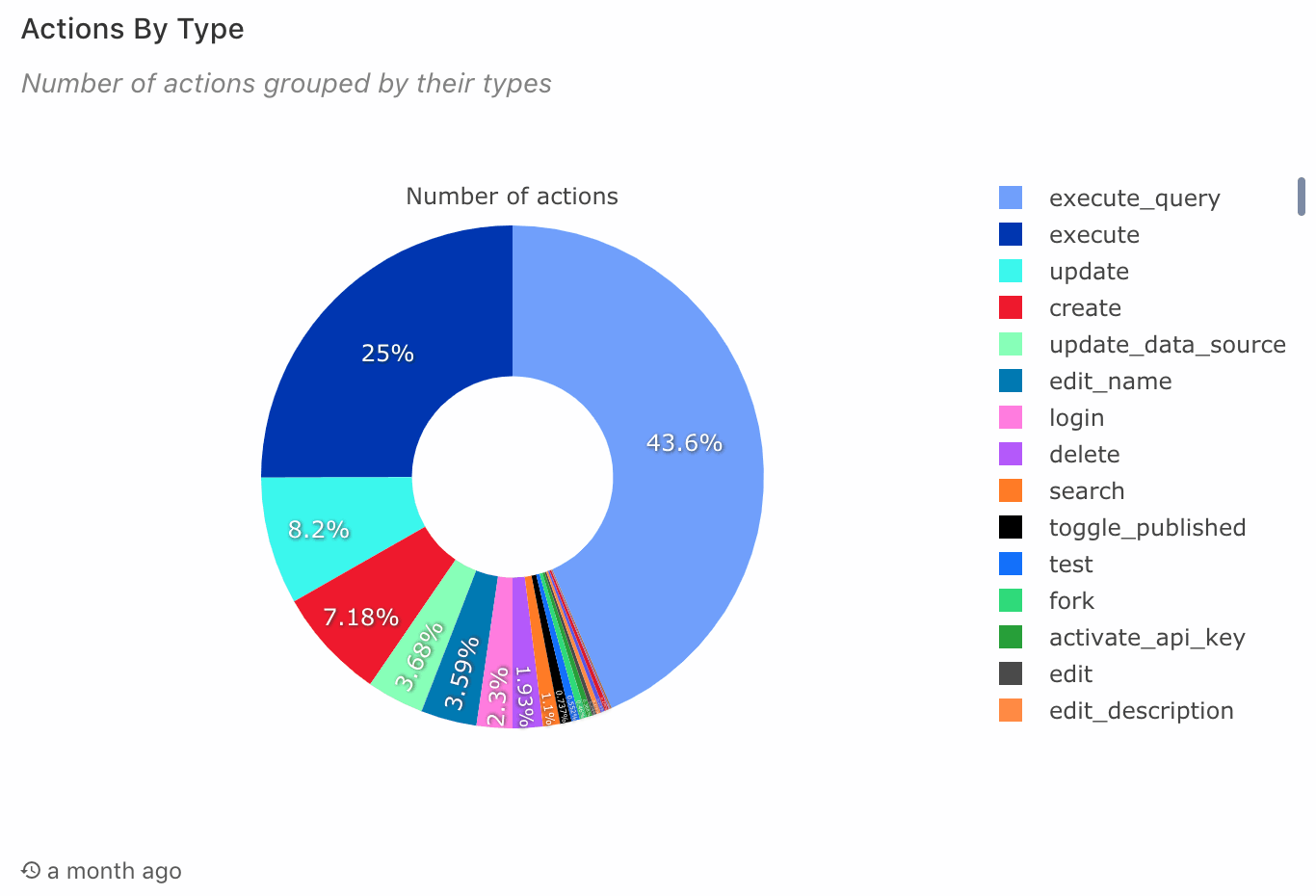 In the preceding chart, we can see that the different events have been broken down into types, which allows us to gain a better understanding of the main use cases of Redash: 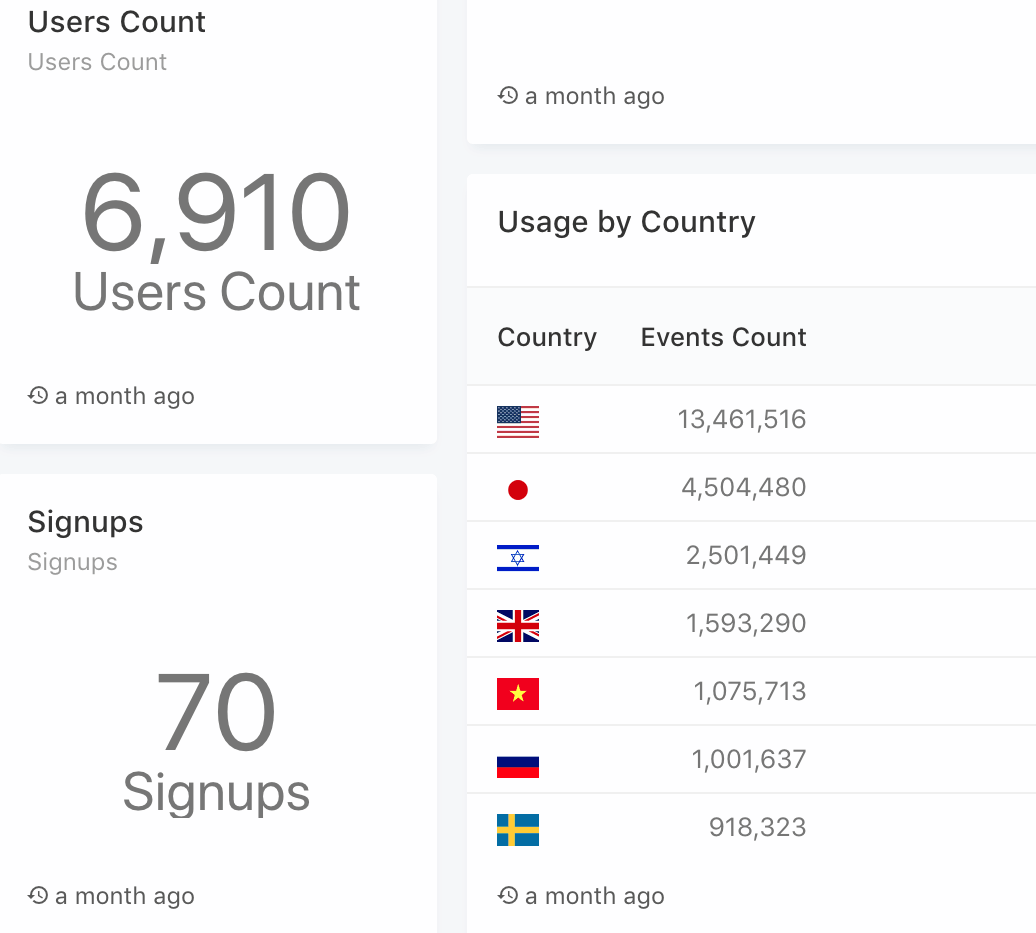 Along with a further breakout of events by Country (gives us a distribution of events in different countries), using IP2Location transformation. In addition to this, there are the new signups and the total user count metrics.

Every single one of these metrics can tell us something valuable, but when combined with a single dashboard (as you can see in the following diagram), a metric can tell us a whole different kind of story (which we will cover in upcoming chapters): 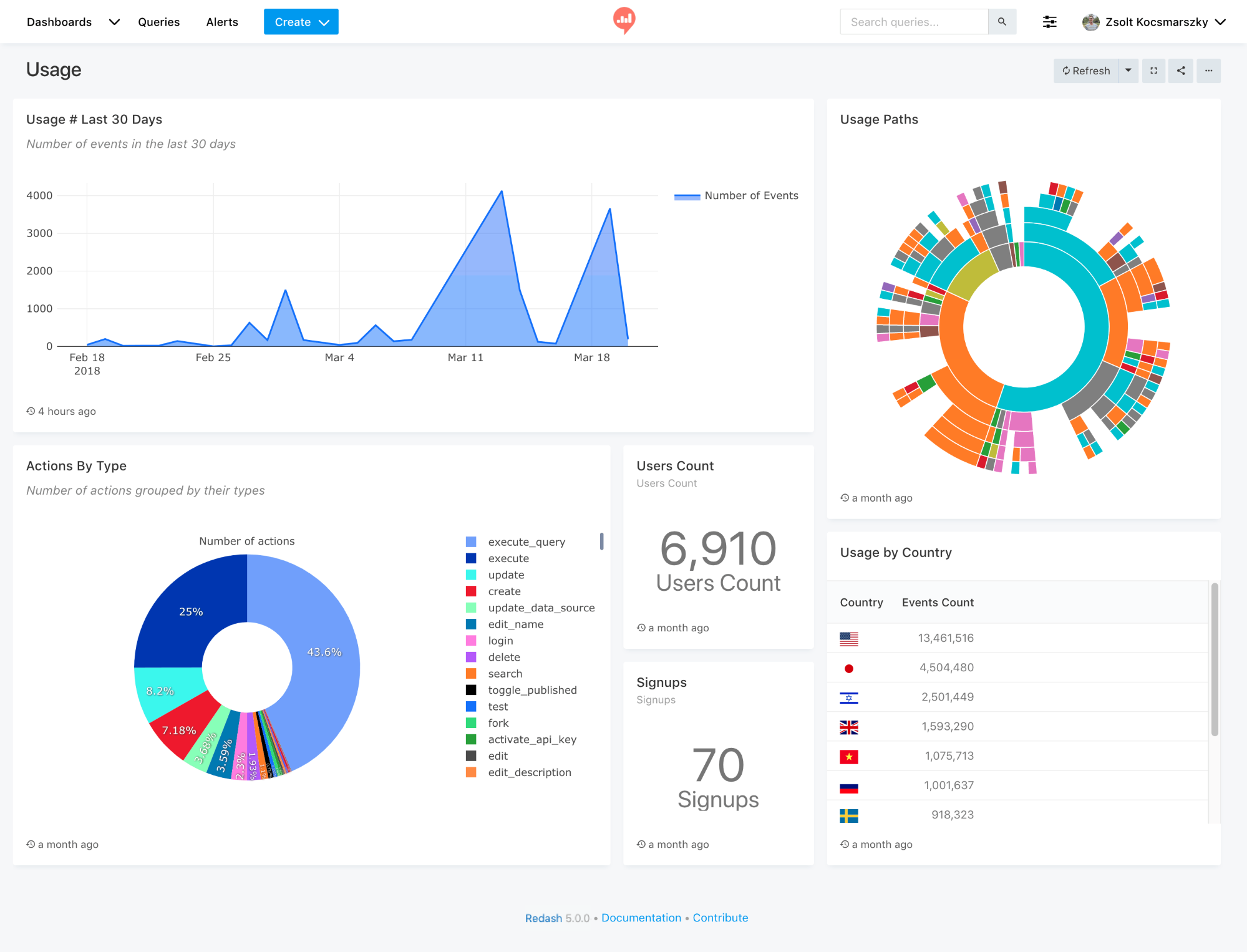 Based on the previous example, letâ€™s summarize a set of features for an ideal tool that helpÂ  the company as a whole make the most of its data:

It would be great if person A from marketing were to start to create a query and person B from sales were able to see it while it's being created, and then comment/modify and create a separate version of it.

The same goes for query visualizations and dashboards.

Back in 2013, a company named EverythingMeÂ was facing all the preceding challenges and yearned for a tool that would have an ideal set of features and fit in with our well-established data-driven culture.

After trying several legacy BI suites, a decision was made to create an easier, more collaborative, and faster tool having JSFiddleÂ as inspiration.

These conditions stimulated the creation of Redash to target those requirements.

Redash was created during a hackathon by Arik Fraimovich, who then became the founder and lead developer of Redash.

While initially built to allow rapidly querying and visualizing data from Amazon Redshift (hence the name Re:Dash = Redshift + Dashboard), Redash quickly grew to become the companyâ€™s main data analysis, visualization, and dashboarding tool, serving all of the departments in the company.

More Data Sources and visualization types were added, people started to contribute to the source code, and eventually Redash was released as an open source tool, and later developed into a separate independent company, with Redash as its main product. Its main goal was to help other companies to become more data-driven with little to no effort, just as we did back in the days at EverythingMe.

What exactly is Redash?

In this paragraph, we will go over the key features of Redash to understand its possibilities and how it can fit into various departments within the company:

Even if a team member is not familiar with SQL syntax, they can utilize query parametersthat they can easily modify to get the desired results, alternatively they canÂ easilyFork(Duplicateâ€”exactly as you would in GitHub), an existing query/visualization, and modify it according to their needs.

Both the query parameters and Forking work best as a quick intro into the Redash world.

One example of this concerns data export for external clients, such as sending an automatic daily revenue report. Another great example of API usage is slack chatbot integration, which allows you to easily bring data into team conversations. A proper example of self-service is where any team member can fetch data insights from within a chat window, no coding is required, and there is no need to open tickets to the BI team: just type your request inside the chat and get the results!

What if you need a different visualization type? You got it! You need a new datasource? This is a piece of cake. You need a new alert or a new API call? Everything is at your fingertips.

In summary, Redash improvesâ€”and makes more transparent to peers â€”a company's decision-making process, based on an easy and speedy creation of deep-dive dashboards over a company's Data Sources.

This speed comes from several aspects:

Redash has two options that you can use: hosted (with monthly subscription plans) or self-hosted Open Source version (free, and you get to maintain it yourself).

The hosted version is suitable for companies who don't want the hassle of hosting and managing the Redash service (and the surrounding components such as Redis/PostgreSQL/Celery) by themselves (usually, this requires at least one or two dedicated employees, and not everyone has them available immediately).

The self-hosted version suits you best when you have the necessary resources (both machine and human)Â and:

Â The hosted and self-hosted versions are identical, and you can always switch back and forth.

It is recommended, however, to try the self-hosted Redash in development mode at the very least, as this way you can gain a better understanding of the internals of the tool that is about to change your company's data culture!

Redash is a single-page web app, with JS frontend and backend.

Originally having the frontend written in AngularJS, since V5, it's in transition to React: 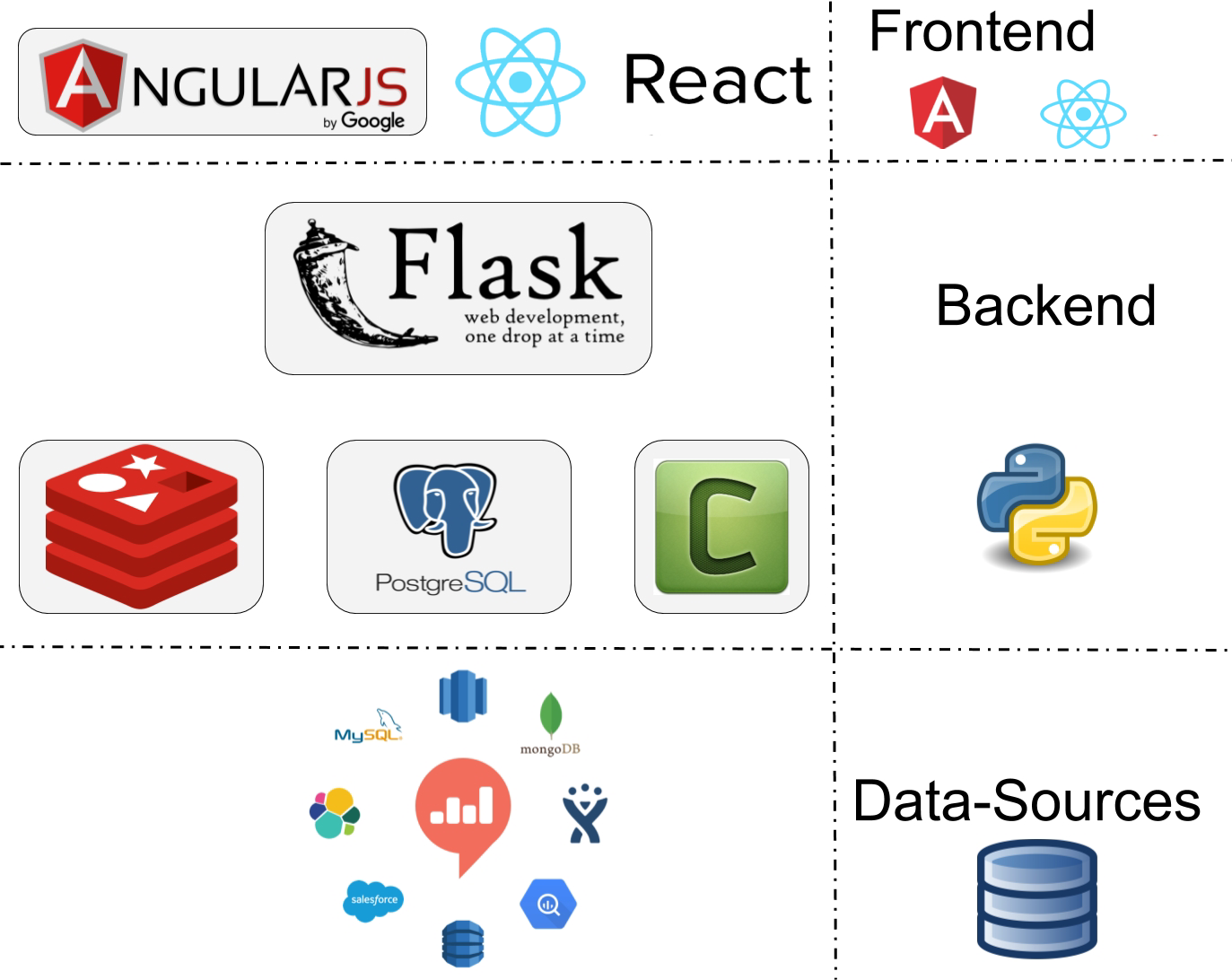 Redash itself is written in Python.

The UI (frontend) is AngularJS,Â which is responsible for all the visualizations, dashboards, and the query editor. The regular user interacts with this the most.

The server (backend) is a Flask App, which uses the Celery Distributed Task Queue as its task worker engine (Celery workers are responsible for query execution).

The server handles the actual query execution requests on various Data Sources, such as dashboard refresh requests, both from the frontend and from API calls (for example, slack bots, advanced user's webhooks, and so on).

The PostgreSQL database is used to store all the necessary application metadata and configurations (users/groups/datasource definitions/queries/dashboards).

Redis in the memory datastore serves as both the Celery Message Broker (Celery requires a message broker service to send and receive messages).

In this chapter, we've covered the challenges that every data-driven business should expect to come across, and how Redash comes in handy to target those challenges and help shorten the time between questions and answers by allowing the user to query all of theirÂ Data Sources from a single place, without moving the data anywhere.

Redash allows you to combine queries and visualizations from different Data Sources in a single dashboard to provide the business department with the most comprehensive overview possible.

In the sections that followed, we went over the main features of Redash, as well as its architecture in brief. In the nextÂ chapter, we will cover the installation options and a step-by-step guide to Redash.

If you're planning to use Redash as a hosted service, or if the installation of the software will be undertaken by another department, you can skip the next chapter. 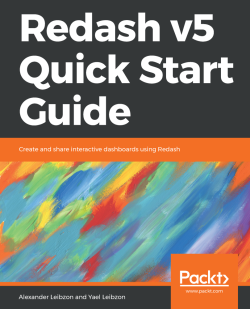