Vert.x is a platform for building highly networked and scalable applications on the Java Virtual Machine. Using just a few powerful building blocks, it provides a powerful framework that scales to a multitude of different usage scenarios. It is one of the few truly polyglot development platforms, providing seamless interoperability between components written in JavaScript, CoffeeScript, Java, Ruby, Python, and Groovy.

Real-time Web Application Development using Vert.x 2.0 will show you how to get up and running on the powerful Vert.x platform. Using a hands-on example of developing a mind map editor, this book shows you how to build a Vert.x application from the ground up, and on the way introduces all of the major building blocks of Vert.x, such as integrating with a database, polyglot development, and so on.

Real-time Web Application Development using Vert.x 2.0 will guide you step-by-step through building a Vert.x application so that you’ll be able to start building one of your own in no time. From initiation to scaling, you’ll develop a mind map editor application with real-time collaboration capabilities. As you go through the development process, you’ll get to know all the building blocks of Vert.x applications: Verticles, Worker Verticles, the Event Bus, and Modules. You’ll also see how Vert.x apps seamlessly reach into client devices by building a client application using the Vert.x Event Bus Bridge, Knockout.js, and D3.js.

Real-time Web Application Development using Vert.x 2.0 guides you through the whole Vert.x application development process, tying all of the important concepts together with a simple, realistic example application.


ChapterÂ 1.Â Getting Started with Vert.x

The web frameworks that powered much of the page-based web aren't necessarily cut out to serve the real-time web. This is where Vert.x excels. Vert.x has been designed from the ground up to enable you to build scalable and real-time web applications.

In this chapter, you will take your very first steps in Vert.x development by installing Vert.x, and running it from the command line.

You will also get familiar with some key Vert.x concepts and put them into use by creating a web server for serving static files.

To install Vert.x, you simply download and unpack a ZIP file. A Vert.x installation lives in a self-contained directory structure, which can be located anywhere on your machine.

It's also recommended that you include the path to the Vert.x executable in your PATH environment variable. This will make working with the Vert.x command line easier.

In the following pages, we'll go through these steps, after which you'll have everything up and running.

Vert.x is written in Java, and needs the Java JDK 7 to run the program. Older versions of Java are not supported.

Checking your version of Java

In the output, you should see a version number beginning with 1.7. If not, you'll need to obtain the JDK before you can start working with Vert.x.

If you are on Windows, it may be the case that Java is installed but the java command still isn't available in the command prompt. If you suspect this is the case, check if the directory C:\Program Files\Java exists. If it has a subdirectory beginning with jdk1.7.0 you're good to go.

If you're running Mac OS X or Windows, I recommend you to install Oracle's Java SE Version 7 or newer. You will find it from Oracle's website at http://www.oracle.com (be sure to select the full JDK or the for Developers option, and not just the JRE or the for Consumers option). Follow the instructions provided by the web page and the installer to complete the installation.

If you're running Linux, I recommend you install OpenJDK 7 from your package manager, if available. On Ubuntu and Debian, it will be in the openjdk-7-jdk package:

Because Vert.x is built in Java, the distribution package is the same regardless of your operating system or hardware. Head to http://vertx.io/, and download the latest version of Vert.x.

In the following instructions, the Vert.x version is marked as x.x.x. Substitute it with the version of Vert.x that you have downloaded.

The next steps will be different for different operating systems. You'll need to unpack the downloaded ZIP file and add the bin directory of the distribution to your PATH environment variable. This will allow you to easily launch Vert.x from anywhere on your machine.

If you are using the Homebrew package manager on OS X, you can just install the Vert.x package and skip these steps.

Other package manager integrations may exist, but obtaining the distribution from the Vert.x website is still the most common installation method.

You can now proceed to Running Vert.x section to test your installation.

To install Vert.x on Windows 7 or Windows 8, perform with the following steps:

You can now proceed to the Running Vert.x section to verify your installation.

Let's verify that the Vert.x installation was successful by trying to run it. Go to a terminal (on OS X/Linux) or a Command Prompt (on Windows). Try running the vertx command:

This should simply output the version of your Vert.x distribution. If you see the version, you have successfully installed Vert.x!

The vertx command has multiple uses, but the main one is to launch a Vert.x instance, which is something you'll be doing a lot.

A Vert.x instance is the container in which you run the Vert.x applications. It is a single Java virtual machine, which is hosting the Vert.x runtime and its thread pools, classloaders, and other infrastructure.

If you want to see the different things that you can do with the vertx command, just run it without any arguments, and it will print out a description of all the different use cases:

As an alternative to using the vertx command, it is also possible to launch an embedded Vert.x instance from within an existing Java (or other JVM language) application. This is useful when you have an existing application and want to integrate the Vert.x framework in to it.

To embed Vert.x, you need to add the Vert.x JARs to your application's classpath. The JARs are available in the Vert.x installation directory, and also as Maven dependencies. After this, you can instantiate a Vert.x instance programmatically.

We won't be using embedded Vert.x instances in this book, but you can find more information about it in the Embedding the Vert.x platform section of the Vert.x documentation available at http://vertx.io.

Now that you have Vert.x installed and are able to run it, you're all set to write your first Vert.x application. This application will consist of a single verticle that prints out the classic "Hello world" message.

A verticle is the fundamental building block of the Vert.x applications. You can think of a verticle as a component of an application, which typically consists of one or a few code files and is focused on a specific task.

Verticles are similar to packages in Java or namespaces in C#; they are used to organize different parts of a system. However, as opposed to packages or namespaces, verticles are also a runtime construct with some interesting properties when it comes to concurrency. We will discuss them in Chapter 2, Developing a Vert.x Web Application.

Verticles can be implemented in any of the supported Vert.x languages (JavaScript, CoffeeScript, Java, Ruby, Python, or Groovy). For this one, let's use JavaScript.

Create a file named hello.js (it doesn't matter where you put it). Open the file in an editor and add the following contents:

That's all the code you need for this simple application.

Now, let's launch a Vert.x instance and run hello.js in it as a verticle:

So, what just happened?

In JavaScript verticles, we will always use the require function to load the code from within the Vert.x framework or from other JavaScript files. The require function is defined by the CommonJS modules/1.1 standard, which Vert.x implements. You can find more information about it at http://wiki.commonjs.org/wiki/Modules/1.1.

You have just gone through the basic process of writing and running a Vert.x application. Now, let's turn to something a bit more useful.

Our application is going to need a web server, which is used to serve all the HTML, CSS, and JavaScript files to web browsers.

Vert.x includes all the building blocks for setting up a web server, including the HTTP networking and filesystem access. However, there is also something more high-level we can use, that is, a publicly available web server module, which does file serving over HTTP for us out of the box.

Vert.x modules are a solution for packaging and distributing the Vert.x applications or pieces of application functionality for reuse.

A module can include one or more verticles, and an application can make use of any number of modules written in different programming languages.

Vert.x has a growing public-module registry (http://modulereg.vertx.io/), from which you can get a variety of open source modules to your applications. The web server module is one of them, and we will install some more later in the book.

In addition to public modules, it is also possible and highly encouraged to package your own applications and libraries as modules. You will learn how to do this in Chapter 5, Polyglot Development and Modules.

First create a folder for the application we will be building for the duration of this book. You can just call it mindmap, and put it within your Home directory:

We are going to deploy the mod-web-server module. The latest version of the module at the time of writing is 2.0.0-final, which we will be using here. Alternatively, you can look for the latest version in the Vert.x module registry.

Add the following code to app.js:

Let's go through the contents of this file:

Now you can run this code as a verticle:

The first time a new module is deployed, Vert.x will automatically download and install it from the public module registry. You will see a subfolder named mods appearing in the project folder, and within it the contents of the installed modules. (In this case, the web server module.)

If you now point your web browser at http://localhost:8080/, you will see a 404 Resource not found message. This means that the web server is running, but there is nothing to serve. Let's fix that.

Create a subfolder named web in the project folder. By default, this is where the web server module looks for static files to serve the browsers (this folder is configurable through the web server's module configuration object).

In this folder, add a simple HTML document in a file named index.html, with the following contents:

Now, as you point your browser at http://localhost:8080/, you will see the Hello! message. You are running a web server in Vert.x!

In this chapter, you have installed Vert.x and taken the very first steps towards building a real-time web application by configuring and running a web server.

You have already covered a lot of ground: 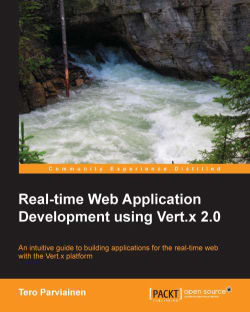