The Reactive approach will help you to write clean, cohesive, resilient, scalable, and maintainable code.Rx Swift belongs to a large family of Rx implementations in different programming languages that all share an almost identical syntax and semantics. We will introduce you to the world of Reactive programming, primarily focusing on mobile platforms. We tell you how you can benefit from using Rx Swift in your projects, existing or new.

We are going to build a simple application that allows people to look up any movie and add it to a favourites list. With this app we will be able to utilize RxSwift to react in real-time to any business logic that could be done through server-side with Google Firebase.

The course will demonstrate how unbelievably easy it is to configure asynchronous behavior and other app aspects that are traditionally considered to be hard to implement and maintain. It explains what Rx is made of, and how to switch to the Reactive way of thinking to get the most out of it.

This video is a definitive tutorial on Functional Reactive Programming with Swift filled with well-described examples. We quickly get up to speed with some lesser known Swift concepts such as closures and key differences in Swift 4 so that all viewers are on the same page with Swift 4 knowledge. 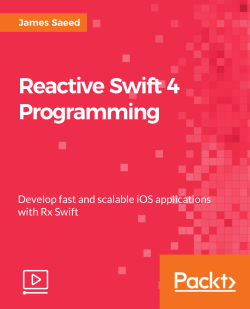