This video is a combination of the following three aspects:

The video course will begin with the fundamentals of reactive programming by understanding Observers and Observables. To ease into the Observer pattern, we will start off with bacon.js and then move on to using Rx.js for both client side and server side applications. The course then follows a pragmatic approach, building small, useful applications at each step, gradually leading you to mastering reactive programming.

Full and easy to understand.

This is a great overview of RXJS, providing lots of examples with very little setup (it can all be done in a browser). The Reactive Javascript Programming provides well thought out lessons broken up into small digestible chunks. As someone with some prior exposure to RXJS I was able to breeze through it fairly easily. Newcomers to RXJS will want to spend quality time with each lesson, experimenting along the way, and perhaps supplement the provided lessons by perusing the online documentation and other sources. I especially appreciated the segments on operators and the various types of Subject types, as they demystified the purpose and use of these more obscure observables. I was also glad to see that use cases were covered to some degree in the earlier segments. I would love to see another RXJS offering from this author, specifically RXJS 5.5 with lettable operators, and perhaps more advanced usage such as the lift operator. James 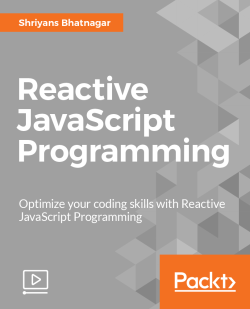