Developed by Facebook, React is a popular library for building impressive user interfaces. React extends its capabilities to the mobile platform using the React Native framework and integrates with popular web and mobile tools to build scalable applications.

React Projects is your guide to learning React development by using modern development patterns and integrating React with powerful web tools such as GraphQL, Expo, and React 360. You'll start building a real-world project right from the first chapter and get hands-on with developing scalable applications as you advance to building more complex projects. Throughout the book, you'll use the latest versions of React and React Native to explore features such as routing, Context, and Hooks on multiple platforms, which will help you build full-stack web and mobile applications efficiently. Finally, you'll get to grips with unit testing with Jest and E2E testing with Cypress to build test-driven apps.

By the end of this React book, you'll have developed the skills necessary to start building scalable React apps across web and mobile platforms. 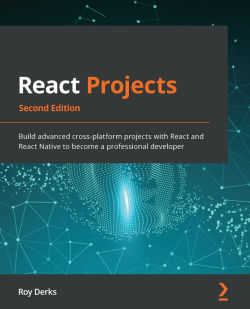