Python is a versatile programming language that can be used for a wide range of technical tasks—computation, statistics, data analysis, game development, and more. Though Python is easy to learn, it’s range of features means there are many aspects of it that even experienced Python developers don’t know about. Even if you’re confident with the basics, its logic and syntax, by digging deeper you can work much more effectively with Python – and get more from the language.

Python Unlocked walks you through the most effective techniques and best practices for high performance Python programming - showing you how to make the most of the Python language. You’ll get to know objects and functions inside and out, and will learn how to use them to your advantage in your programming projects. You will also find out how to work with a range of design patterns including abstract factory, singleton, strategy pattern, all of which will help make programming with Python much more efficient. Finally, as the process of writing a program is never complete without testing it, you will learn to test threaded applications and run parallel tests.

If you want the edge when it comes to Python, use this book to unlock the secrets of smarter Python programming.

In this chapter, we will dive into Python objects. Objects are the building blocks of the language. They may represent or abstract a real entity. We will be more interested in factors affecting such behavior. This will help us understand and appreciate the language in a better way. We will cover the following topics:

Key 1: Objects are language's abstraction for data. Identity, value, and type are characteristic of them.

All data and items that we work on in a program are objects, such as numbers, strings, classes, instances, and modules. They possess some qualities that are similar to real things as all of them are uniquely identifiable just like humans are identifiable by their DNA. They have a type that defines what kind of object it is, and the properties that it supports, just like humans of type cobbler support repairing shoes, and blacksmiths support making metal items. They possess some value, such as strength, money, knowledge, and beauty do for humans.

Name is just a means to identify an object in a namespace similar to how it is used to identify a person in a group.

In Python, every object has a unique identity. We can get this identity by passing an object to built-in ID function ID (object).This returns the memory address of the object in CPython.

Interpreter can reuse some objects so that the total number of objects remains low. For example, integers and strings can be reused in the following manner:

This is also a reason that addition of two strings is a third new string, and, hence, it is best to use the StringIO module to work with a buffer, or use the join attribute of strings:

Key 2: Immutability is the inability to change an object's value.

The value of the object is the data that is stored in it. Data in an object can be stored as numbers, strings, or references to other objects. Strings, and integers are objects themselves. Hence, for objects that are not implemented in C (or core objects), it is a reference to other objects, and we perceive value as the group value of the referenced object. Let's take an example of an object iC instance of the C class with the str and lst attributes, as shown in the following diagram: 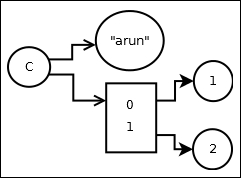 The code snippet to create this object will be as follows:

An object's type tells us about the operations and functionality that the object supports, and it may also define the possible values for objects of that type. For example, your pet may be of type dog (an instance of the dog class) or cat (an instance of the cat class). If it is of type dog, it can bark; and if it is type cat, it can meow. Both are a type of animal (cat and dog inherit from the animal class).

This will not work for built-in, compiled classes as it works only for class objects defined on runtime.

Key 4: All objects can be made callable.

To reuse and group code for some task, we group it in the functions classes, and then call it with different inputs. The objects that have a __call__ attribute are callable and __call__ is the entry point. For the C class, tp_call is checked in its structure:

Methods in classes are similar to functions, except that they are called with an implicit instance as a first argument. The functions are exposed as methods when they are accessed from the instance. The function is wrapped in a method class and returned. The method class stores instances in __self__ and function in __func__, and its __call__ method calls __func__ with first argument as __self__:

Using this logic, we can also collect methods that are needed from other classes in the current class, like the following code, instead of multiple inheritances if data attributes do not clash. This will result in two dictionary lookups for an attribute search: one for instance, and one for class.

When we call classes, we are calling its type, that is metaclass, with class as a first argument to give us a new instance:

Similarly, when we call instances, we are calling their type, that is class, with instance as first argument:

How objects are created

Objects other than built-in types or compiled module classes are created at runtime. Objects can be classes, instances, functions, and so on. We call an object's type to give us a new instance; or put in another way, we call a type class to give us an instance of that type.

Let's first take a look at how function objects can be created. This will broaden our view. This process is done by interpreter behind the scenes when it sees a def keyword. It compiles the code, which is shown as follows, and passes the code name arguments to the function class that returns an object:

To enable developer access to both functionalities, creating new object, and initializing new object, in class itself; __call__ calls the __new__ class to return a new object and __init__ to initialize it. The full flow can be visualized as shown in the following code:

Take a look at the following diagram: 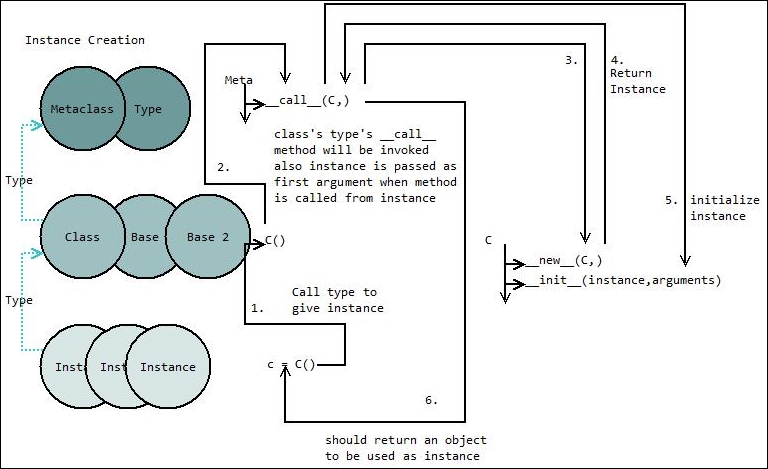 There are three ways in which we can create classes. One is to simply define the class. The second one is to use the built-in __build_class__ function, and the third is to use the new_class method of type module. Method one uses two, method two uses method three internally. When interpreter sees a class keyword, it collects the name, bases, and metaclass that is defined for the class. It will call the __build_class__ built-in function with function (with the code object of the class), name of the class, base classes, metaclass that is defined, and so on:

This function returns the class. This will call the __prepare__ class method of metaclass to get a mapping data structure to use as a namespace. The class body will be evaluated, and local variables will be stored in this mapping data structure. Metaclass's type will be called with this namespace dictionary, bases, and class name. It will in turn call the __new__ and __init__ methods of metaclass. Metaclass can change attributes passed to its method:

Take a look at the following diagram: 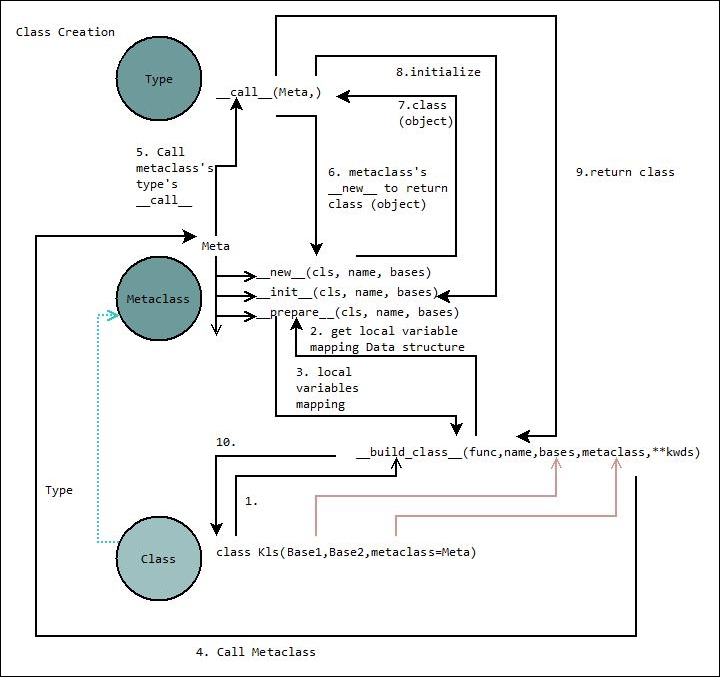 Key 8: Which attribute will be used.

Attributes are values that are associated with an object that can be referenced by name using dotted expressions. It is important to understand how attributes of an object are found. The following is the sequence that is used to search an attribute:

Any attribute of a class, which is an object defining any of these methods, acts as a descriptor:

When an attribute is searched in an object first, it is searched in its dictionary then its type's (base class's) dictionary. If found, object has one of these methods defined and that method is invoked instead. Let's assume that b is an instance of the B class, then the following will happen:

Class, static, and instance methods are all implementable using descriptors. We can understand descriptors and these methods in one go:

A sample code usage of these methods is as follows:

They can be understood and implemented using descriptors easily as follows:

In this chapter, we dived into how objects work in the Python language, how are they connected, and how are they called. Descriptors and instance creation are very important topics as they give us a picture of how system works. We also dived into how attributes are looked up for objects.

Now, we are all prepared to learn how to use language constructs to their maximum potential. In the next chapter, we will also discover utilities that are extremely helpful in elegantly finishing a project. 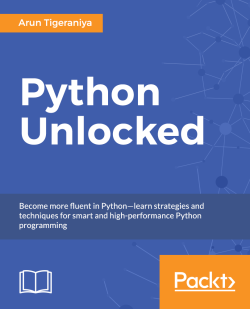