Apache Spark is an open source framework for efficient cluster computing with a strong interface for data parallelism and fault tolerance. This course will show you how to leverage the power of Python and put it to use in the Spark ecosystem. You will start by getting a firm understanding of the Spark 2.0 architecture and how to set up a Python environment for Spark. You will get familiar with the modules available in PySpark. You will learn how to abstract data with RDDs and DataFrames and understand the streaming capabilities of PySpark. Also, you will get a thorough overview of machine learning capabilities of PySpark using ML and MLlib, graph processing using GraphFrames, and polyglot persistence using Blaze. Finally, you will learn how to deploy your applications to the cloud using the spark-submit command. By the end of this course, you will have established a firm understanding of the Spark Python API and how it can be used to build data-intensive applications.

All the code and supporting files for this course are available on Github at https://github.com/PacktPublishing/PySpark-for-Beginners

This course takes a very comprehensive, step-by-step approach so you understand how the Spark ecosystem can be used with Python to develop efficient, scalable solutions. Every section is standalone and defined in a very easy-to-understand manner. 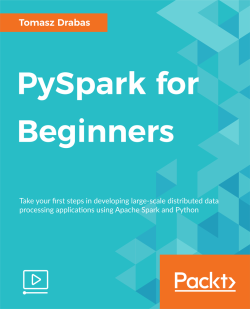 Unlock this video and the full library for $5 a month* Expires:
Get all the quality content you’ll ever need to stay ahead with a Packt subscription – access over 7,500 online books and videos on everything in tech. *$5 a month for the first 5 months.
Start now