React has taken the web development world by storm, and it is only natural that its unique architecture and third-party support ecosystem should be applied to native application development. Using JavaScript, you can build a truly native application that renders native UI components and accesses native device functionality.

In this video, we start with a look at state management and how to keep your code usable by other developers, how to build for your ideal user, how to create animations that pop, and how to publish your apps to the App Store. With the core UI built, we can take off our designer hats and focus on creating code that is clean and easy to reuse.

By the end of the course, you will have created your own application using React Native and learned to publish your app in the App Store and PlayStore.

The code bundle for this video course is available at - https://github.com/PacktPublishing/Publishing-Your-Application-with-React-Native

This course is packed with step-by-step instructions on how to create impressive applications using React Native, and is split into clear components so that you can learn at your own pace and concentrate on what interests you the most. 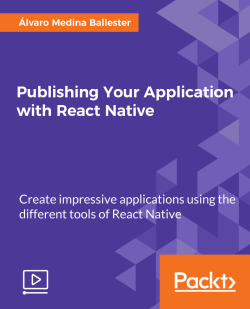