With the help of an easy-to-use tool provided by Proxmox, users can easily improve their service by building up their own cluster. Both open source and combining two virtualization technologies (KVM- and container-based) under one platform, this management solution offers maximum flexibility for building virtual environments.

This book starts with the basics and provides you with some background knowledge of server virtualization and then shows you the differences between other types of virtualization software, such as VMware, Hyper-V, Xen, and so on versus Proxmox. By the end of this book, you will have a strong idea on how to plan, design, implement, and test your own cluster with a high level of availability.

This book adopts a step-by-step, easy-to-follow approach and demonstrates a high availability cluster with brief descriptions and useful explanations on important topics.

Have you ever imagined how good it would be if you don't need to stop your services during a system upgrade operation? Do you have a powerful server but haven't used all of its resources? Do you want to set up a server platform quickly using a system template? If the answer to all these questions is yes, then you will be very happy to work with Proxmox Virtual Environment (also called Proxmox VE).

This chapter will show you some basic concepts of Proxmox VE before actually using it, including the technology used, basic administration, and some options available during set up.

The following topics are going to be covered in this chapter:

So what is Proxmox Virtual Environment actually used for? Proxmox VE is an open source bare metal environment based on the Debian Linux distribution (also called hypervisor or Virtual Machine Monitor (VMM)) for server virtualization. It allows a user to install different operating systems (for example, Windows, Linux, Unix, and others) on a single computer or a cluster built by grouping computers together. It consists of powerful Kernel-based virtual machines and lightweight OpenVZ containers as an alternative.

The main features for Proxmox VE can be summarized as follows:

You can try Proxmox for free at http://pve.proxmox.com/wiki/Downloads.

Have you ever heard about cloud computing? It is a hot topic in the IT industry and claims that you can allocate nearly unlimited computer resources on a pay-as-you-go basis. Are you not curious to know how they are able to provide such a service? The underlying technology that allows them to be able to provide such a service is hardware virtualization. If you don't understand how virtualization works, it could be difficult for you to imagine how they can add or remove resources instantly. Let's talk about how server virtualization works and what it offers us.

Why should we use server virtualization? Since the new generation of server class machines are becoming much more powerful, it becomes quite difficult to use up all the system resources if we only install one Operating System (OS) on it. Also, renting multiple server racks in a data center is expensive. Centralizing multiple servers into a limited set of powerful servers seems to be a more cost-effective solution, thus virtualization appears. Server virtualization allows users to create multiple system objects called virtual machines (VMs) that act like normal computers. Virtualization of physical devices implies that each virtual machine has its own CPU units (called vCPU), memory, hard disk, and network card, according to a user's allocation. When the user turns on the virtual machines, different OSes can be installed on them. Therefore, better system resources utilization can be achieved. The following figure shows the difference between a physical machine and a virtual machine: 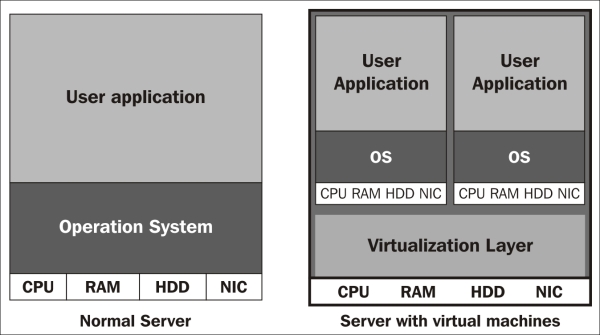 During any process execution, a CPU is the computing unit that executes predefined instruction sets to generate the results that the program had defined. But, it is dangerous if we give full access to all applications on our devices. For example, if there is no restriction on hardware access, a web page will be able to inject suspicious code into local memory and it may further damage the data stored in our computers. Therefore, a term called protection ring ranking, which ranges from 0 to 3 under the x86 architecture is used to protect our hardware. Normally, Ring 0 (also called supervisor mode) is used in the OS to monitor and control system resources. Ring 3 (also called user mode) is used for a user application, and if we would like to have access to hardware, a system call provided from the supervisor mode must be made. The following figure shows the system ring structure for the x86 platform: 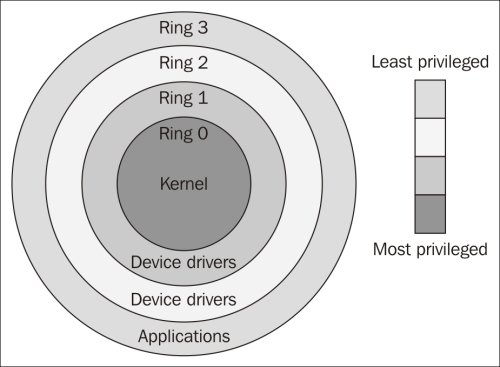 So, when both physical and virtualized platforms are running operating systems, how can we distinguish them from each other? Here come the terms: host and guest, explained in the following points:

We have discussed why we need to learn server virtualization and how virtualization works, so are you curious about how many types of major virtualization software are on the market? What are the differences between them? Let's take a deep look at it:

We have learned that there are many virtualization platforms on the market, so what are the differences between them? Let's take a look at the following table:

After we have talked about so many concepts, let's learn how to configure Proxmox! I assume you have downloaded and installed your own Proxmox. If you face any difficulty during the installation, you can refer to the following link:

The following steps will help you perform basic administration in Proxmox VE:

Uploading the OS template or the ISO file to Proxmox

Before we can start trying to build our own virtual machines with OpenVZ, we have to first upload either an OS template or an ISO file that contains the operating system installation files to Proxmox. The following steps will help us understand how to do this:

We are now ready to create our own virtual machines; let's see how we can create an OpenVZ-based virtual machine first. For example, the OpenVZ template file will be stored inside /var/lib/vz/template/cache/; you can also manually upload it to that directory if you don't wish to use the web interface.

To create an OpenVZ-based virtual machine, please follow these steps:

Isn't it easy to create a virtual machine with a web interface? By the way, you can identify whether a virtual machine is an OpenVZ container or KVM by its associated icons, as shown in the following screenshot:

Congratulations! You have just created your own virtual machine! Wait, how can we access the system? That's a good question; here, we have two options to achieve our goal. One option is to access it from the web browser. What? Access an operating system with a web browser? Yes, let's see how it works:

Pay attention to OpenVZ-based VM; you will see that it cannot be accessed from the console because you have to configure a getty service inside the VM. So, we need to use another method for this purpose, for example, the OpenVZ management CLI:

There are two types of virtualizations available in Proxmox: OpenVZ and KVM. What are the differences between them?

OpenVZ is an operating-system-level virtualization based on the GNU/Linux kernel and the host operation system. Theoretically, OpenVZ is not a type of virtualization but more like the jail concept in Linux. Since a patched Linux kernel is needed, only Linux guests can be created. All guests are called containers that share the same kernel and architecture as long as the host OS, while each container reserves a separate user space.

There is no overhead for OpenVZ as containers can call hardware resources directly. However, since all containers share the system kernel of the host OS, a system-related problem might appear during the host OS kernel upgrade. Besides, OpenVZ stores container files as normal files in the host OS, so it is not recommended to use OpenVZ if there are confidential files stored in the virtual machine. Kernel-based Virtual Machine (KVM) is basically a hardware-assisted virtualization with the modified Linux kernel built with the KVM module. KVM itself does not perform any emulation or virtualization. Instead, it simply exposes the /dev/kvm interface. QEMU is chosen as a software-based emulator to simulate hardware for the virtualized environment. The structure of KVM is shown as follows: 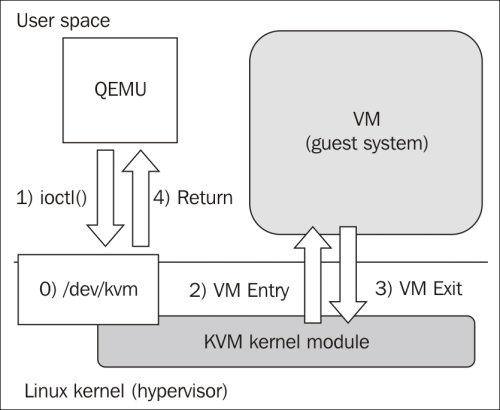 As we can see, overheads on frequent requests appear in QEMU-emulated devices. Thus, an improved version for KVM is published with VirtIO drivers. VirtIO creates a buffer for both the guest system and QEMU, which speeds up the I/O performance and reduces the overhead. To enjoy the performance burst, a VirtIO driver must be installed separately on each emulated hardware device. In the following diagram, we have demonstrated the new structure of the KVM machines with the VirtIO drivers installed: 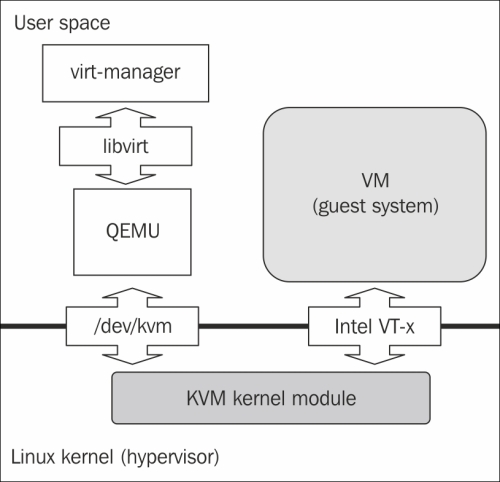 The following table shows the supported operating systems provided by OpenVZ and KVM:

During the virtual machine creation, the following virtual disk options are available:

Since the OpenVZ filesystem is only file-based, it is possible to pack the configurations and the disk image into a file for further deployment. We can create our own template file (which will be introduced in Chapter 7, Disaster Recovery on a Proxmox VE Cluster), or download the template file (also called a virtual appliance) via a web interface or from http://download.proxmox.com/appliances/.

In this chapter, we introduced the different modes of server virtualization, the reasons for using it, and how it actually works. We also caught a glimpse of the development on server virtualization by knowing the background technologies. Besides that, we learned the features and strengths of the different hypervisors on the market. Moreover, we went through some basic administration techniques of Proxmox, including the creation of virtual machines, importing OpenVZ templates, and viewing a guest system via the web console. Most importantly, we learned how to distinguish KVM and OpenVZ, which affects our decision during VM creation, for example, security versus performance.

In the next chapter, we are going to learn some concepts on high availability and the introduction of the Proxmox cluster. 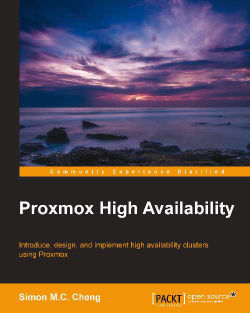