Programming MapReduce with Scalding is a practical guide to setting up a development environment and implementing simple and complex MapReduce transformations in Scalding, using a test-driven development methodology and other best practices.

This book will first introduce you to how the Cascading framework allows for higher abstraction reasoning over MapReduce applications and then dive into how Scala DSL Scalding enables us to develop elegant and testable applications. It will then teach you how to test Scalding jobs and how to define  specifications  and behavior-driven development (BDD) with Scalding. This book will also demonstrate how to monitor and maintain cluster stability and efficiently access SQL, NoSQL, and search platforms.

In this first chapter, we will take a look at the core technologies used in the distributed model of Hadoop; more specifically, we cover the following:

In the following diagram, Hadoop stands at the base, and MapReduce as a design pattern enables the execution of distributed jobs. MapReduce is a low-level programming model. Thus, a number of libraries such as Cascading, Pig, and Hive provide alternative APIs and are compiled into MapReduce. Cascading, which is a Java application framework, has a number of extensions in functional programming languages, with Scalding being the one presented in this book.

Hadoop can be used for a lot of things. However, when you break it down to its core parts, the primary features of Hadoop are Hadoop Distributed File System (HDFS) and MapReduce.

HDFS stores read-only files by splitting them into large blocks and distributing and replicating them across a Hadoop cluster. Two services are involved with the filesystem. The first service, the NameNode acts as a master and keeps the directory tree of all file blocks that exist in the filesystem and tracks where the file data is kept across the cluster. The actual data of the files is stored in multiple DataNode nodes, the second service.

MapReduce is a programming model for processing large datasets with a parallel, distributed algorithm in a cluster. The most prominent trait of Hadoop is that it brings processing to the data; so, MapReduce executes tasks closest to the data as opposed to the data travelling to where the processing is performed. Two services are involved in a job execution. A job is submitted to the service JobTracker, which first discovers the location of the data. It then orchestrates the execution of the map and reduce tasks. The actual tasks are executed in multiple TaskTracker nodes.

Hadoop handles infrastructure failures such as network issues, node, or disk failures automatically. Overall, it provides a framework for distributed storage within its distributed file system and execution of jobs. Moreover, it provides the service ZooKeeper to maintain configuration and distributed synchronization.

Many projects surround Hadoop and complete the ecosystem of available Big Data processing tools such as utilities to import and export data, NoSQL databases, and event/real-time processing systems. The technologies that move Hadoop beyond batch processing focus on in-memory execution models. Overall multiple projects, from batch to hybrid and real-time execution exist.

Massive parallel processing of large datasets is a complex process. MapReduce simplifies this by providing a design pattern that instructs algorithms to be expressed in map and reduce phases. Map can be used to perform simple transformations on data, and reduce is used to group data together and perform aggregations.

The simplicity of this model allows Hadoop to translate each phase, depending on the amount of data that needs to be processed into tens or even hundreds of tasks being executed in parallel, thus achieving scalable performance.

To illustrate how MapReduce works, let's look at an example of a log file of total size 1 GB with the following format:

Once this file is stored in HDFS, it is split into eight 128 MB blocks and distributed in multiple Hadoop nodes. In order to build a MapReduce job to count the amount of INFO, WARNING, and ERROR log lines in the file, we need to think in terms of map and reduce phases.

In one map phase, we can read local blocks of the file and map each line to a key and a value. We can use the log level as the key and the number 1 as the value. After it is completed, data is partitioned based on the key and transmitted to the reduce tasks.

MapReduce guarantees that the input to every reducer is sorted by key. Shuffle is the process of sorting and copying the output of the map tasks to the reducers to be used as input. By setting the value to 1 on the map phase, we can easily calculate the total in the reduce phase. Reducers receive input sorted by key, aggregate counters, and store results.

In the following diagram, every green block represents an INFO message, every yellow block a WARNING message, and every red block an ERROR message: 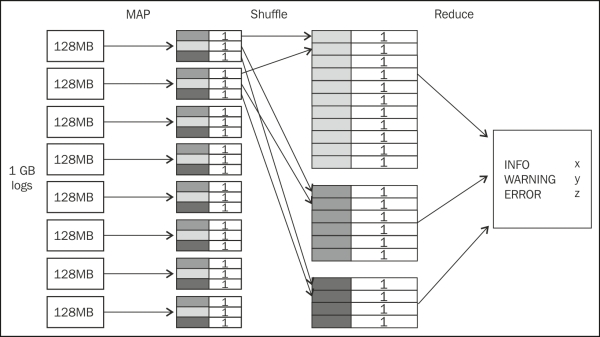 This simple MapReduce example requires more than 50 lines of Java code (mostly because of infrastructure and boilerplate code). In SQL, a similar implementation would just require the following:

Hive is a technology originating from Facebook that translates SQL commands, such as the preceding one, into sets of map and reduce phases. SQL offers convenient ubiquity, and it is known by almost everyone.

However, SQL is declarative and expresses the logic of a computation without describing its control flow. So, there are use cases that will be unusual to implement in SQL, and some problems are too complex to be expressed in relational algebra. For example, SQL handles joins naturally, but it has no built-in mechanism for splitting data into streams and applying different operations to each substream.

Pig is a technology originating from Yahoo that offers a relational data-flow language. It is procedural, supports splits, and provides useful operators for joining and grouping data. Code can be inserted anywhere in the data flow and is appealing because it is easy to read and learn.

However, Pig is a purpose-built language; it excels at simple data flows, but it is inefficient for implementing non-trivial algorithms.

In Pig, the same example can be implemented as follows:

Cascading is implemented in Java and designed to be expressive and extensible. It is based on the design pattern of pipelines that many other technologies follow. The pipeline is inspired from the original chain of responsibility design pattern and allows ordered lists of actions to be executed. It provides a Java-based API for data-processing flows.

Developers with functional programming backgrounds quickly introduced new domain specific languages that leverage its capabilities. Scalding, Cascalog, and PyCascading are popular implementations on top of Cascading, which are implemented in programming languages such as Scala, Clojure, and Python.

Cascading is an abstraction that empowers us to write efficient MapReduce applications. The API provides a framework for developers who want to think in higher levels and follow Behavior Driven Development (BDD) and Test Driven Development (TDD) to provide more value and quality to the business.

Cascading is a mature library that was released as an open source project in early 2008. It is a paradigm shift and introduces new notions that are easier to understand and work with.

In Cascading, we define reusable pipes where operations on data are performed. Pipes connect with other pipes to create a pipeline. At each end of a pipeline, a tap is used. Two types of taps exist: source, where input data comes from and sink, where the data gets stored.

In the preceding image, three pipes are connected to a pipeline, and two input sources and one output sink complete the flow. A complete pipeline is called a flow, and multiple flows bind together to form a cascade. In the following diagram, three flows form a cascade:

The Cascading framework translates the pipes, flows, and cascades into sets of map and reduce phases. The flow and cascade planner ensure that no flow or cascade is executed until all its dependencies are satisfied.

The preceding abstraction makes it easy to use a whiteboard to design and discuss data processing logic. We can now work on a productive higher level abstraction and build complex applications for ad targeting, logfile analysis, bioinformatics, machine learning, predictive analytics, web content mining, and for extract, transform and load (ETL) jobs.

By abstracting from the complexity of key-value pairs and map and reduce phases of MapReduce, Cascading provides an API that so many other technologies are built on.

What happens inside a pipe

Inside a pipe, data flows in small containers called tuples. A tuple is like a fixed size ordered list of elements and is a base element in Cascading. Unlike an array or list, a tuple can hold objects with different types.

Tuples stream within pipes. Each specific stream is associated with a schema. The schema evolves over time, as at one point in a pipe, a tuple of size one can receive an operation and transform into a tuple of size three.

Transformation of tuple streams occurs by applying one of the five types of operations, also called pipe assemblies:

To implement the pipe for the logfile example with the INFO, WARNING, and ERROR levels, three assemblies are required: The Each assembly generates a tuple with two elements (level/message), the GroupBy assembly is used in the level, and then the Every assembly is applied to perform the count aggregation.

We also need a source tap to read from a file and a sink tap to store the results in another file. Implementing this in Cascading requires 20 lines of code; in Scala/Scalding, the boilerplate is reduced to just the following:

Cascading is the framework that provides the notions and abstractions of tuple streams and pipe assemblies. Scalding is a domain-specific language (DSL) that specializes in the particular domain of pipeline execution and further minimizes the amount of code that needs to be typed.

Cascading offers multiple extensions that can be used as taps to either read from or write data to, such as SQL, NoSQL, and several other distributed technologies that fit nicely with the MapReduce paradigm.

A data processing application, for example, can use taps to collect data from a SQL database and some more from the Hadoop file system. Then, process the data, use a NoSQL database, and complete a machine learning stage. Finally, it can store some resulting data into another SQL database and update a mem-cache application.

The pipelining abstraction works really well with the Hadoop ecosystem and other state-of-the-art messaging technologies. Cascading provides the blueprints to pipeline for MapReduce. As a framework, it offers a frame to build applications. It comes with several decisions that are already made, and it provides a foundation, including support structures that allow us to get started and deliver results quickly.

Unlike Hive and Pig, where user-defined functionality is separated from the query language, Cascading integrates everything into a single language. Functional and scalable languages follow lightweight, modular, high performance, and testable principles. Scalding combines functional programming with Cascading and brings the best of both worlds by providing an unmatchable way of developing distributed applications.

In the next chapter, we will introduce Scala, set up our environment, and demonstrate the power and expressiveness of Scalding when building MapReduce applications. 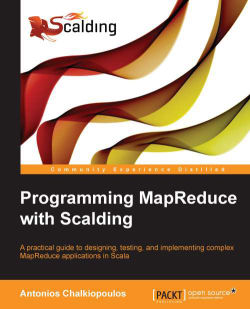