As the cloud version of SQL Server, Azure SQL Database differs in key ways when it comes to management, maintenance, and administration. It’s important to know how to administer SQL Database to fully benefit from all of the features and functionality that it provides. This book addresses important aspects of an Azure SQL Database instance such as migration, backup restorations, pricing policies, security, scalability, monitoring, performance optimization, high availability, and disaster recovery. It is a complete guide for database administrators, and ideal for those who are planning to migrate from on premise SQL Server database to an Azure SQL Server database.

It is compatible with most SQL Server features and is optimized for Software-as-a-Service (SaaS) applications.

Azure SQL Database uses familiar T-SQL programming and a user interface which is well known and is also easier to adopt. It is therefore important for SQL Server database administrators and developers to learn Azure SQL Database.

Azure SQL Database is a highly scalable multi-tenant and a highly available Platform-as-a-Service (PaaS) or DBaaS offering from Microsoft.

Azure SQL Database allows users to focus only on managing the data, and is divided into four layers which work together to provide relational database functionality to the users, as shown in the following diagram: 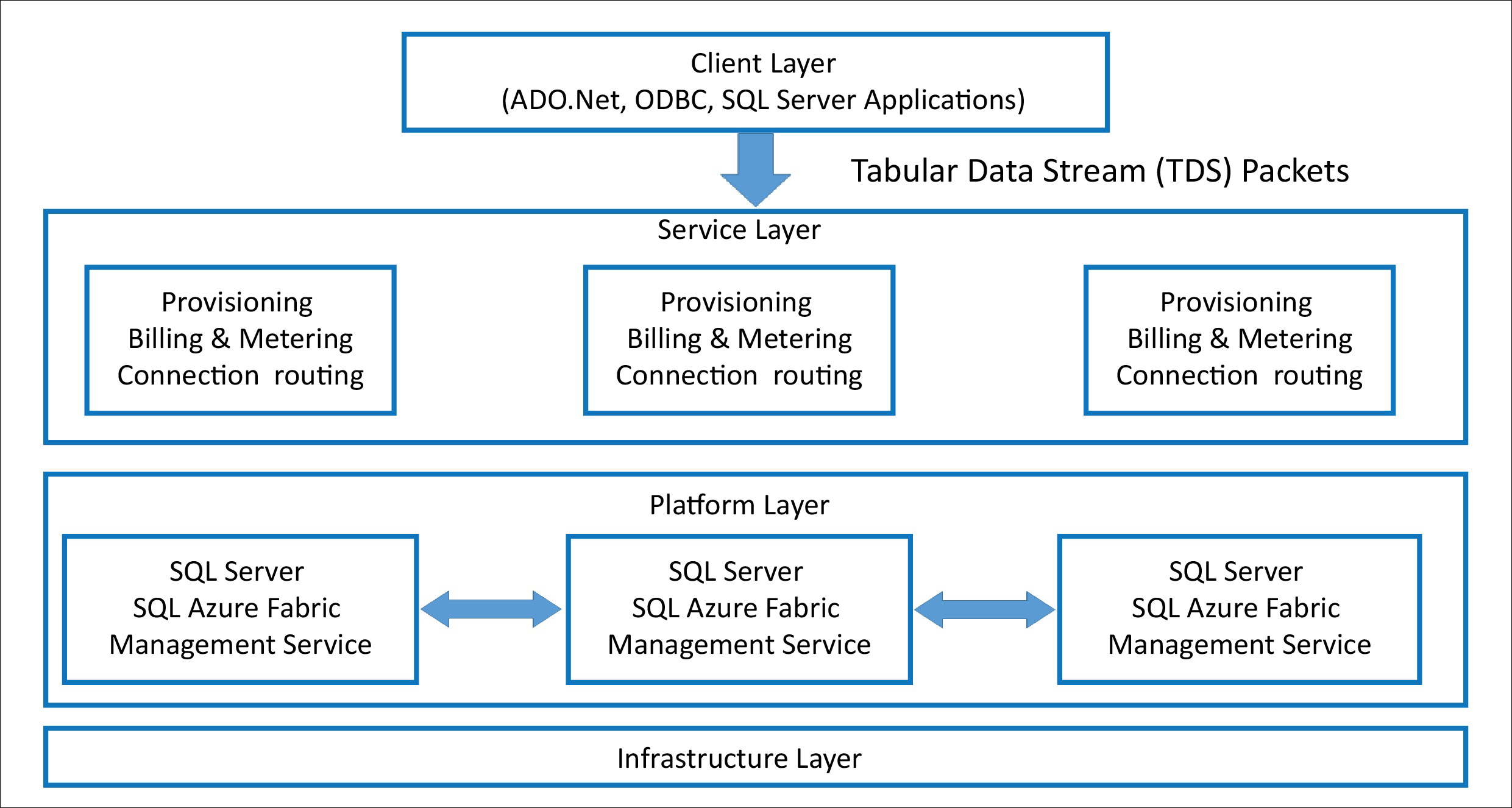 If you were to compare it to on-premises SQL Server architecture, other than the Service Layer, the rest of the architecture is pretty similar. 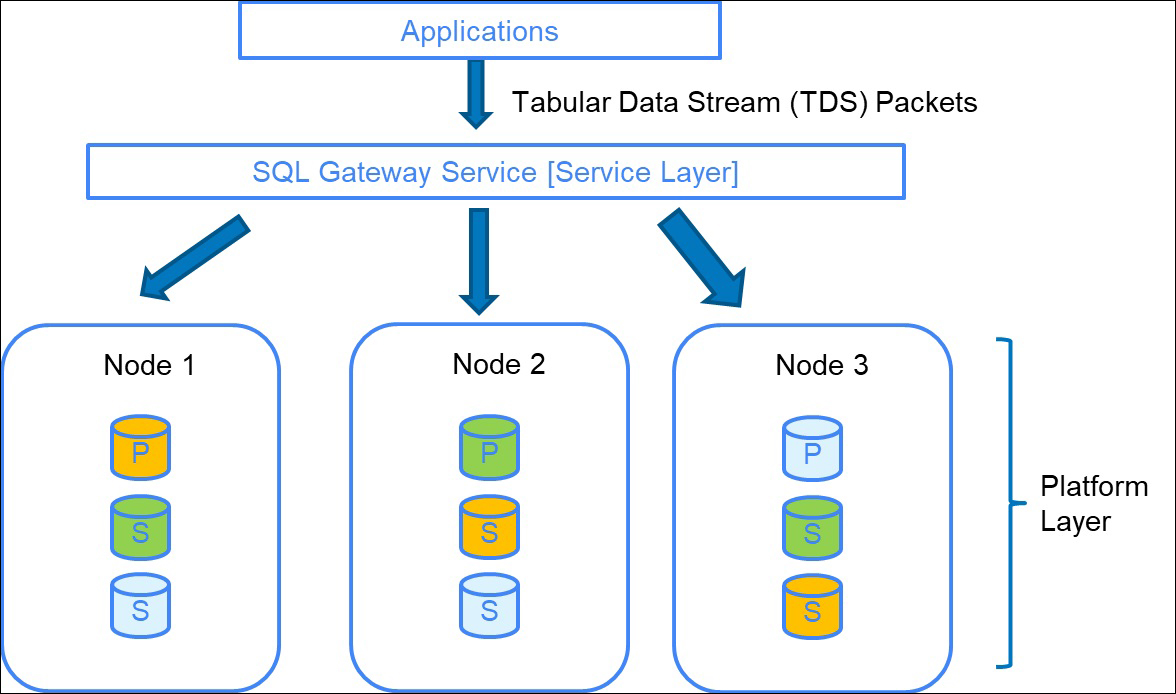 The application sends a TDS request (login, DML, or DDL queries) to the SQL Database. The TDS request is not directly sent to the Platform layer. The request is first validated by the SQL Gateway Service at the Service layer.

The Gateway Service validates the login and firewall rules, and checks for denial of service attacks. It then dynamically determines the physical server on which the SQL database is hosted and routes the request to that physical server in the Platform layer. The dynamic routing allows SQL Database to be moved across physical servers or SQL instances in case of hardware failures.

Here, a node is a physical server. A single database is replicated across three physical servers internally by Microsoft to help the system recover from physical server failures. The Azure SQL Server user connects to just a logical name.

Internals about dynamic routing are out of the scope of this book.

In this section, we'll create a new SQL database in Azure using the Azure portal:

Connecting and Querying the SQL Database from the Azure Portal

In this section, we'll learn to connect and query the SQL Database from Azure portal:

All resources must be deleted to successfully complete the activity at the end of this chapter.

Conventional database backup and restore statements aren't supported. The backups are automatically scheduled and start within a few minutes of the database provisioning. The backups are transactionally consistent, which means that you can do a point-in-time restore.

Other than the automatic backups, you can export the Azure SQL Database bacpac or dacpac file to Azure storage.

To view the recovery model of an Azure SQL Database, execute the following query:

You can use any of the two methods discussed earlier in the chapter to run the query – the Azure portal or SSMS.

You should get the following output:

Azure SQL Server doesn't have SQL Server Agent, which is used to schedule jobs and send success/failure notifications. However, you can use the following workarounds:

Change Data Capture (CDC) allows you to capture data modifications to CDC-enabled databases and tables. The CDC feature is important in incremental load scenarios, such as incrementally inserting changed data to the data warehouse from an OLTP environment. The CDC requires SQL Server Agent, and therefore isn't available in Azure SQL Database. However, you can use the temporal table, SSIS, or Azure Data factory to implement CDC.

The auditing features, such as C2 auditing, system health extended event, SQL default trace, and anything that writes alerts or issues into event logs or SQL error logs, aren't available. This is because of the fact that it's a PaaS offering and we don't have access or control to event logs or error logs.

However, there is an auditing and threat detection feature available out of the box for Azure SQL Database.

Three-part names (databasename.schemaname.tablename) are only limited to tempdb wherein you access a temp table as tempdb.dbo.#temp. For example, if there is a temporary table, say, #temp1, then you can run the following query to select all of the values from #temp1:

You can use Elastic query to access tables from different databases from an Azure SQL Server. Elastic query is covered in detail later in the book. You can access objects in different schemas in the same Azure SQL Database using two-part (Schemaname.Tablename) names.

Some features not supported by Azure SQL Database or Azure SQL Server are:

The SQL Browser is a Windows service and provides instance and post information to incoming connection requests. This isn't required as the Azure SQL Server listens to port 1433 only.

Azure SQL Database doesn't support FileStream or filetable, just because of the PaaS nature of the service. There is a workaround to use Azure Storage; however, that would require re-work on the application and the database side.

SQL CLR allows users to write programmable database objects such as stored procedures, functions, and triggers in managed code. This provides significant performance improvement in some scenarios. SQL CLR was first supported and then the support was removed due to concerning security issues.

Resource Governor allows you to throttle/limit resources (CPU, Memory, I/O) as per different SQL Server workloads. This feature is not available in Azure SQL Database.

Azure SQL Database comes with different services tiers, each suitable for different workloads. You should first evaluate the performance tier your application workload will fit into and accordingly provision the database for that performance tier.

Log shipping is the process of taking log backups on a primary server, and copying and restoring them on the secondary server. Log shipping is commonly used as a high availability or disaster recovery solution, or to migrate a database from one SQL instance to another. Log shipping isn't supported by Azure SQL Database.

SQL Trace and Profiler can't be used to trace the events on Azure SQL Server. As of now, there isn't any direct alternate other than using DMVs, monitoring using Azure Portal, and extended events.

Trace Flags are special switches used to enable or disable a particular SQL Server functionality. These are not available in Azure SQL Server.

The USE statement is used to switch from one database context to another. This isn't supported in Azure SQL Database.

This section discusses provisioning of an Azure SQL Server and SQL Database using PowerShell. To understand the process, let’s take the example of Mike, who is the newest member of the Data Administration team at ToyStore Ltd., a company that manufactures toys for children. ToyStore has an e-commerce web portal that allows customers to purchase toys online. ToyStore has migrated the online e-commerce portal to Microsoft Azure and is therefore moving to Azure SQL Database from the on-premises SQL Server. Mike is asked to provision the Azure SQL Database and other required resources as his initial assignment. This can be achieved by following the steps below:

If you fall short of time, you can refer to the C:\code\Chapter01\ProvisionAzureSQLDatabase.ps1 file. You can run this file in the PowerShell console instead of typing the code as instructed in the following steps. Open a PowerShell console and enter the full path, as stated previously, to execute the PowerShell script. You'll have to change the Azure Resource Group name, Azure SQL Server, and Azure SQL Database name in the script before executing it.

You also learned about the request flow through the different layers when a user connects and queries an Azure SQL Database.

You learned to connect and query the database from SQL Server Management Studio and the Azure portal.

In the next chapter, we will discuss how to migrate data from an on-premises system to an Azure SQL Database.

Decided to purchase a book (pdf format). Went through a few screens and within a matter of few seconds had the book on my local computer..

We are moving from SQL Server 2008 R2 to SQL Server 2016 and 2017 Cloud. I was searching for good book. I found only this book got every thing I need for My migration and maintainance 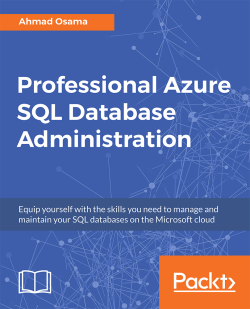