Despite being the cloud version of SQL Server, Azure SQL Database differs in key ways when it comes to management, maintenance, and administration. This book shows you how to administer Azure SQL database to fully benefit from its wide range of features and functionality.

Professional Azure SQL Database Administration begins by covering the architecture and explaining the difference between Azure SQL Database and the on-premise SQL Server to help you get comfortable with Azure SQL database. You’ll perform common tasks such as migrating, backing up, and restoring a SQL Server database to an Azure database. As you progress, you’ll study how you can save costs and manage and scale multiple SQL Databases using elastic pools. You’ll also implement a disaster recovery solution using standard and active geo-replication. Whether it is learning different techniques to monitor and tune an Azure SQL database or improving performance using in-memory technology, this book will enable you to make the most out of Azure SQL database features and functionality for data management solutions.

By the end of this book, you’ll be well versed with key aspects of an Azure SQL database instance, such as migration, backup restorations, performance optimization, high availability, and disaster recovery.

By the end of this lesson, you will be able to:

It is compatible with most SQL Server features and is optimized for Software-as-a-Service (SaaS) applications.

Azure SQL Database uses familiar Transact-SQL programming and a user interface that is well known and is also easy to adopt. It is therefore important for SQL Server Database administrators and developers to learn how to use Azure SQL Database.

Azure SQL Database is a highly scalable multi-tenant and a highly available Platform-as-a-Service (PaaS) or Database-as-a-Service (DBaaS) offering from Microsoft.

Azure SQL Database allows users to focus only on managing data, and is divided into four layers that work together to provide users with relational database functionality, as shown in the following diagram: 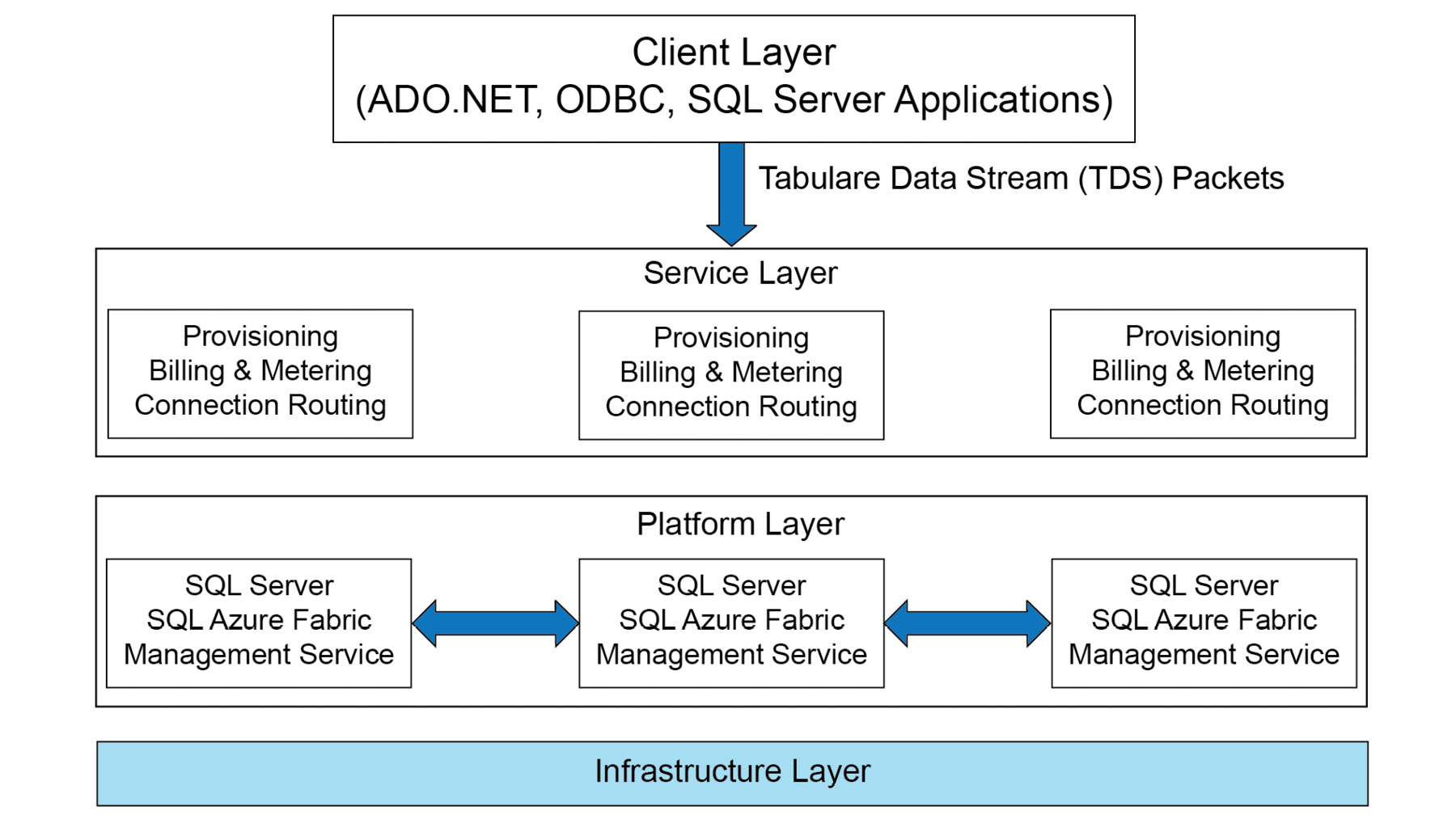 If you were to compare it to the on-premise SQL Server architecture, other than the Service Layer, the rest of the architecture is pretty similar.

The client layer acts as an interface for applications to access a SQL database. It can be either on-premises or on Microsoft Azure. The Tabular Data Stream (TDS) is used to transfer data between a SQL database and applications. SQL Server also uses TDS to communicate with applications. This allows applications such as .NET, ODBC, ADO.NET, and Java to easily connect to Azure SQL Database without any additional requirements.

The service layer acts as a gateway between the client and platform layers. It is responsible for:

This layer is responsible for the administration of the physical hardware and the OS.

Dynamic routing allows us to move a SQL database to different physical servers in the event of any hardware failures or for load distribution.

The application sends a TDS request (login, DML, or DDL queries) to the SQL database. The TDS request is not directly sent to the Platform layer. The request is first validated by the SQL Gateway Service at the Service layer.

Here, a node is a physical server. A single database is replicated across three physical servers internally by Microsoft to help the system recover from physical server failures. The Azure SQL Server user connects to just a logical name.

The internals of dynamic routing are out of the scope of this book.

In this section, we'll create a new SQL database in Azure using the Azure portal:

Connecting and Querying the SQL Database from the Azure Portal

In this section, we'll learn how to connect and query the SQL database from the Azure portal:

In this section, we'll connect to and query an Azure SQL database from SQL Server Management Studio (SSMS):

Figure 1.24: Total number of orders in the "orders" table

All resources must be deleted to successfully complete the activity at the end of this lesson.

Azure SQL Database is a PaaS offering and therefore some of its features differ from the on-premises SQL Server. Some of the important features that differ are as follows:

Conventional database backup and restore statements aren't supported. Backups are automatically scheduled and start within a few minutes of the database provisioning. Backups are consistent, transaction-wise, which means that you can do a point-in-time restore.

There is no additional cost for backup storage until it goes beyond 200% of the provisioned database storage.

You can reduce the backup retention period to manage backup storage costs. You can also use the long-term retention period feature to store backups in the Azure vault for a much lower cost for a longer duration.

Apart from automatic backups, you can also export the Azure SQL Database bacpac or dacpac file to Azure storage.

To view the recovery model of an Azure SQL database, execute the following query:

You can use either of the two methods discussed earlier in the lesson to run the query – the Azure portal or SSMS.

You should get the following output:

Azure SQL Server doesn't have SQL Server Agent, which is used to schedule jobs and send success/failure notifications. However, you can use the following workarounds:

Change Data Capture (CDC) allows you to capture data modifications to CDC-enabled databases and tables. The CDC feature is important in incremental load scenarios, such as incrementally inserting changed data to the data warehouse from an OLTP environment. The CDC requires SQL Server Agent, and therefore isn't available in Azure SQL Database. However, you can use the temporal table, SSIS, or Azure Data Factory to implement CDC.

The auditing features, such as C2 auditing, system health extended events, SQL default trace, and anything that writes alerts or issues into event logs or SQL error logs, aren't available. This is because it's a PaaS offering and we don't have access to or control of event logs or error logs.

However, there is an auditing and threat-detection feature available out of the box for Azure SQL Database.

Note that you should have SQL Server 2012 or above at on-premises. Replication and distribution agents can't be configured on Azure SQL Database.

Three-part names (databasename.schemaname.tablename) are only limited to tempdb, wherein you access a temp table as tempdb.dbo.#temp. For example, if there is a temporary table, say #temp1, then you can run the following query to select all the values from #temp1:

You can use an elastic query to access tables from different databases from an Azure SQL server. Elastic queries are covered in detail later in the book. You can access objects in different schemas in the same Azure SQL database using two-part (Schemaname.Tablename) names.

Some features not supported by Azure SQL Database or Azure SQL Server are:

SQL managed instance is a fully managed SQL Server instance offering announced in May 2017 and made generally available from October 1, 2018.

Managed instance supports most of the features of an on-premise deployment, which were earlier not available in Azure SQL Database. It therefore provides easy lift and shift migration from an on-premises environment to the cloud.

When you migrate to managed instance on Azure, you don't only migrate databases, you migrate licenses too.

You can save up to 55% on managed instance, when migrating from SQL Server Enterprise or Standard edition with software assurance. For more details, please visit https://azure.microsoft.com/en-us/blog/migrate-your-databases-to-a-fully-managed-service-with-azure-sql-database-managed-instance/ or contact Azure Support.

Some of the important features supported by managed instance that are not available in Azure SQL Database are as follows:

DTC is not supported in managed instance.

These and other features of managed instance make it 100% compatible with an on-premise SQL Server.

SQL Server managed instance follows a vCore based purchasing model. The vCore model gives you the flexibility to choose the compute, memory, and storage based on different workload requirements.

The General Purpose service tier is designed for SQL Server workloads with typical performance requirements and is suitable for the majority of applications.

A SQL managed instance is a set of services hosted on one or more isolated virtual machines inside a virtual network subnet.

Applications connect to databases via an endpoint, <mi_name>.<dns_zone>.database.windows.net, and should be inside a virtual network, a peered virtual network, or an on-premise network connected via VPN or Azure ExpressRoute. 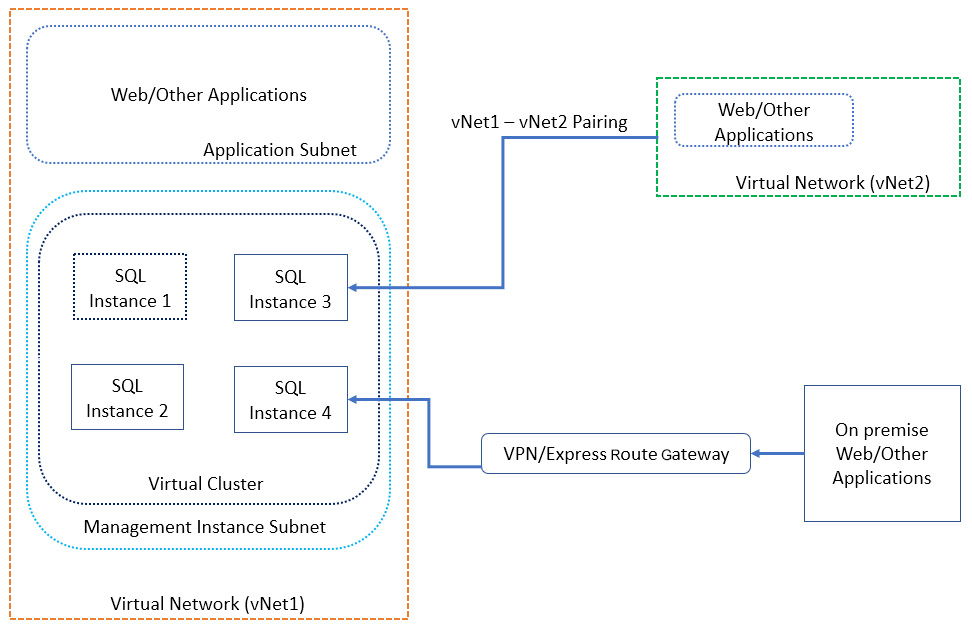 The preceding diagram shows a high-level connectivity architecture for SQL managed instances. Let's go through it:

To provision a SQL-managed instance, perform the following steps:

As we can see, the deployment is in progress:

This section discusses provisioning an Azure SQL server and SQL database using PowerShell. To understand the process, let's take the example of Mike, who is the newest member of the Data Administration team at ToyStore Ltd., a company that manufactures toys for children. ToyStore has an e-commerce web portal that allows customers to purchase toys online. ToyStore has migrated the online e-commerce portal to Microsoft Azure and is therefore moving to Azure SQL Database from the on-premises SQL Server. Mike is asked to provision the Azure SQL database and other required resources as his initial assignment. This can be achieved by following these steps:

To provision a managed instance using a PowerShell script, perform the following steps:

We also learned about the request flow through the different layers when a user connects to and queries an Azure SQL database. We learned how to connect to and query a database from SQL Server Management Studio and the Azure portal.

In the next lesson, we will discuss how to migrate data from an on-premises system to an Azure SQL database.

Read more Unlock this book with a 7 day free trial.
About the Author
livre moyen,pas assez en profondeur et exercice plus a jour 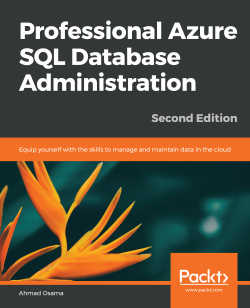