Rust is an open source language tuned toward safety, concurrency, and performance. WebAssembly brings all the capabilities of the native world into the JavaScript world. Together, Rust and WebAssembly provide a way to create robust and performant web applications. They help make your web applications blazingly fast and have small binaries. Developers working with JavaScript will be able to put their knowledge to work with this practical guide to developing faster and maintainable code.

Complete with step-by-step explanations of essential concepts, examples, and self-assessment questions, you’ll begin by exploring WebAssembly, using the various tools provided by the ecosystem, and understanding how to use WebAssembly and JavaScript together to build a high-performing application. You’ll then learn binary code to work with a variety of tools that help you to convert native code into WebAssembly. The book will introduce you to the world of Rust and the ecosystem that makes it easy to build/ship WebAssembly-based applications.

By the end of this WebAssembly Rust book, you’ll be able to create and ship your own WebAssembly applications using Rust and JavaScript, understand how to debug, and use the right tools to optimize and deliver high-performing applications.

JavaScript is one of the most popular programming languages. However, JavaScript has two main disadvantages:

Is there a tool that provides native performance and comes in a much smaller size? Yes, WebAssembly.

WebAssembly is the future of web and node development. WebAssembly is statically typed and precompiled, and thus it provides better performance than JavaScript. Precompilation of the binary provides an option to generate tiny binary bundles. WebAssembly allows languages such as Rust, C, and C++ to be compiled into binaries that run inside the JavaScript engine along with JavaScript. All WebAssembly compilers use LLVM underneath to convert the native code into WebAssembly binary code. Thus, it is important to understand what LLVM is and how it works.

In this chapter, we will learn what the various components of a compiler are and how they work. Then, we will explore what LLVM is and how it helps the compiled languages. Finally, we will see how the LLVM compiler compiles native code. We will cover the following topics in this chapter:

We will make use of Clang, which is a compiler that compiles C/C++ code into native code.

For Linux and Mac users, Clang should be available out of the box.

For Windows users, Clang can be installed from the following link: https://llvm.org/docs/GettingStarted.html?highlight=installing%20clang%20windows#getting-the-source-code-and-building-llvm to install Clang.

You can find the code files present in this chapter on GitHub at https://github.com/PacktPublishing/Practical-WebAssembly

Programming languages are broadly classified into compiled and interpreted languages.

In the interpreted world, the code is read and executed in a single pass. Since the compilation happens at runtime, the generated machine code is not as optimized as its compiled counterpart. Interpreted languages are significantly slower than compiled ones, but they provide dynamic typing and a smaller program size.

In this book, we will focus only on compiled languages.

A compiler is a translator that translates source code into machine code (or in a more abstract way, converts the code from one programming language to another). A compiler is complicated because it should understand the language in which the source code is written (its syntax, semantics, and context); it should also understand the target machine code (its syntax, semantics, and context) and should create a representation that maps the source code into the target machine code.

A compiler has the following components:

Figure 1.1 – Components of a compiler

The frontend focuses on handling the source language. The frontend parses the code upon receiving it. The code is then checked for any grammar or syntax issues. After that, the code is converted (mapped) into an intermediate representation (IR). Consider IR as a format that represents the code that the compiler processes. The IR is the compiler's version of your code.

The second component in the compiler is the optimizer. This is optional, but as the name indicates, the optimizer analyzes the IR and transforms it into a much more efficient one. Few compilers have multiple IRs. The compiler efficiently optimizes the code on every pass over the IR. The optimizer is an IR-to-IR transformer. The optimizer analyzes, runs passes, and rewrites the IR. The optimizations here include removing redundant computations, eliminating dead code (code that cannot be reached), and various other optimizing options, which will be explored in future chapters. It is important to note that the optimizers need not be language-specific. Since they act on the IR, they can be built as a generic component and reused with multiple languages.

Machine code is a set of instructions that instructs the machine to store some values in registers and do some computation on them. For example, the generated machine code is responsible for efficiently storing a 64-bit number in 32-bit architecture in a free register (and things like that). The backend should understand the target environment to efficiently create a set of instructions and properly select and schedule the instructions to increase the performance of the application execution.

The faster the execution, the better the performance.

The efficiency of the compiler depends on how it selects the instruction, allocates the register, and schedules the instruction execution in the given architecture. An instruction set is a set of operations supported by a processor, and this overall design is called an Instruction Set Architecture (ISA). The ISA is an abstract model of a computer and is often referred to as computer architecture. Various processors convert the ISA in different implementations. The different implementations may vary in performance. The ISA is an interface between the hardware and the software.

If you are implementing a new programming language and you want this language to be running on different architectures (or, more abstractly, different processors), then you should build the backend for each of these architectures/targets. But building these backends for every architecture is difficult and will take time, cost, and effort to embark on a language creation journey.

LLVM is not an acronym. When the project was started as a research project, it meant Low-Level Virtual Machine. But later, it was decided to use the name as it is rather than as an acronym.

The main advantages of LLVM are as follows:

Now that we have an understanding of compilers and LLVM, we will see how it is used.

In this section, let's use LLVM's Clang compiler to compile native code into LLVM IR. This will give a better idea of how LLVM works and will be useful for understanding how the compilers use LLVM in future chapters.

We first create a C file called sum.c and enter the following contents:

The sum.c file contains a simple sum function that takes in two unsigned integers and returns the sum of them. LLVM provides the Clang LLVM compiler to compile the C source code. In order to generate the LLVM IR, run the following command:

We provided the Clang compiler with the -S, -O3, and -emit-llvm options:

The preceding code will print out the following LLVM IR:

The syntax of the LLVM IR is structurally much closer to C. The define keyword defines the beginning of a function. Next to that is the return type of the function, i32. Next, we have the name of the function, @sum.

After the function name, we state the types of the input argument (i32 in this case). The local_unnamed_addr attribute indicates that the address is known not to be significant within the module. The variables in the LLVM IR are immutable. That is, once you define them, you cannot change them. So inside the `block`, we create a new local value, %3, and assign it the value of add. add is an opcode that takes in the `type` of the arguments followed by the two arguments, %0 and %1. %0 and %1 denote the first and second local variables. Finally, we return %3 with the ret keyword followed by the `type`.

Imagine that you are writing a new language. The success of the language depends on how versatile the language is at performing on various architectures. Generating optimized byte codes for various architectures (such as x86, ARM, and others) takes a long time and it is not easy. LLVM provides an easy way to achieve it. Instead of targeting the different architecture, create a compiler frontend that converts the source code into an LLVM compatible IR. Then, LLVM will convert the IR into efficient and optimized byte code that runs on any architecture.

LLVM is an umbrella project. It has so many components that you could write a set of books on them. Covering the whole of LLVM and how to install and run them is beyond the scope of this book. If you are interested in learning more about various components of LLVM, how they work, and how to use them, then check out the website: https://llvm.org.

In this chapter, we have seen how compiled languages work and how LLVM helps to compile them. We have compiled a sample program with LLVM to understand how it works. In the next chapter, we'll explore Emscripten, a tool that converts C/C++ into a WebAssembly module. Emscripten uses the LLVM backend to do the compilation. 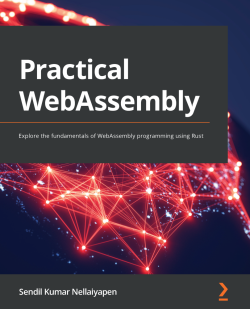