Plone is a highly extensible content management system built on Zope application server, which is written in Python. But, you need to have good programming skills to design and develop Plone web applications. Does that mean you can't have a Plone website if you don't have good programming skills? Of course not! You can develop your Plone websites through a graphical interface where you don't need to fiddle with code.

This book will give you clear understanding of how to use Plone 3 to meet your content management needs. Starting from the basics, this book will walk you through the easy-to-use features of Plone and help you create a feature-rich website through its point-and-click feature.

A variety of authors have contributed chapters to this book in the hope that you, the reader, will get a good understanding of Plone and be able to use it effectively. This beginners' guide will introduce the great CMS and its features and then take you further in web development. The book will introduce you to Plone's advanced UI features and show you how to create such a UI platform for your website. You will learn how to manage the contents like web pages, news items, and so on. Working with custom portlets will help you enhance the web components for your site. Each chapter will show you how to add features to your site and develop its functionality. Each chapter can be read independently; you need not go through the previous one to continue further. You can pick and choose the topics depending on your interest and requirement. 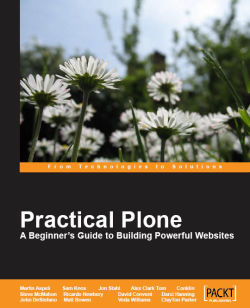