Discrete mathematics deals with studying countable, distinct elements, and its principles are widely used in building algorithms for computer science and data science. The knowledge of discrete math concepts will help you understand the algorithms, binary, and general mathematics that sit at the core of data-driven tasks.

Practical Discrete Mathematics is a comprehensive introduction for those who are new to the mathematics of countable objects. This book will help you get up to speed with using discrete math principles to take your computer science skills to a more advanced level.

As you learn the language of discrete mathematics, you’ll also cover methods crucial to studying and describing computer science and machine learning objects and algorithms. The chapters that follow will guide you through how memory and CPUs work. In addition to this, you’ll understand how to analyze data for useful patterns, before finally exploring how to apply math concepts in network routing, web searching, and data science.

By the end of this book, you’ll have a deeper understanding of discrete math and its applications in computer science, and be ready to work on real-world algorithm development and machine learning.

This chapter is a general introduction to the main ideas of discrete mathematics. Alongside this, we will go through key terms and concepts in the field. After that, we will cover set theory, the essential notation and notions for referring to collections of mathematical objects and combining or selecting them. We will also think about mapping mathematical objects to one another with functions and relations and visualizing them with graphs.

By the end of the chapter, you should be able to speak in the language of discrete mathematics and understand notation common to the entire field.

Please navigate to the graphic bundle link to refer to the color images for this chapter.

What is discrete mathematics?

Discrete mathematics is the study of countable, distinct, or separate mathematical structures. A good example is a pixel. From phones to computer monitors to televisions, modern screens are made up of millions of tiny dots called pixels lined up in grids. Each pixel lights up with a specified color on command from a device, but only a finite number of colors can be displayed in each pixel.

The millions of colored dots taken together form intricate patterns and give our eyes the impression of shapes with smooth curves, as in the boundary of the following circle: 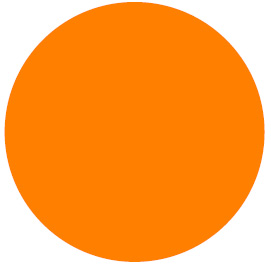 Figure 1.1 – The boundary of a circle

But if you zoom in and look closely enough, the true "curves" are revealed to be jagged boundaries between differently colored regions of pixels, possibly with some intermediate colors, as shown in the following diagram: 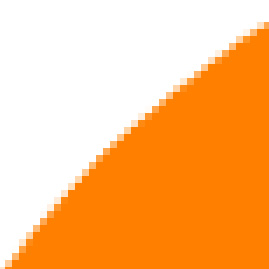 Some other examples of objects studied in discrete mathematics are logical statements, integers, bits and bytes, graphs, trees, and networks. Like pixels, these too can form intricate patterns that we will try to discover and exploit for various purposes related to computer and data science throughout the course of the book.

In contrast, many areas of mathematics that may be more familiar, such as elementary algebra or calculus, focus on continuums. These are mathematical objects that take values over continuous ranges, such as the set of numbers x between 0 and 1, or mathematical functions plotted as smooth curves. These objects come with their own class of mathematical methods, but are mostly distinct from the methods for discrete problems on which we will focus.

Some real-world applications of discrete mathematics are as follows:

Now that we have a rough idea of what discrete mathematics is and some of its applications, we will discuss set theory, which forms the basis for this field in the next section.

"A set is a Many that allows itself to be thought of as a One."

In mathematics, set theory is the study of collections of objects, which is prerequisite knowledge for studying discrete mathematics.

Each object in a set A is called an element of A, and we write an

The empty set is denoted

Sets may contain many sorts of objects—numbers, points, vectors, functions, or even other sets.

Example: Some examples of sets

Examples of sets include the following:

A set A is a subset of B if all elements in A are also in B, and we write it as A

B. We call B a superset of A. If A is a subset of B, but they are not the same set, we call A a proper subset of B, and write A

It is helpful to have an alternative notation in order to construct sets satisfying certain criteria, which we call set-builder notation, defined next.

A set may be written as {x

A | Conditions}, which consists of the subset of A such that the given conditions are true.

Sometimes, sets will be expressed as {x | Conditions} when it is obvious what kind of mathematical object x is from the context.

Examples of sets constructed by set-builder notation include the following.

There are some useful operations that may be done to pairs of sets, which we will see in the next definition.

Let A and B be sets. Let's take a look at the basic operations:

It is often useful to represent these set operations with Venn diagrams, which are visual displays of sets. Here are some examples of the operations shown previously:

As an example, consider the following diagram. We can use the language of set theory to describe many aspects of the diagram: 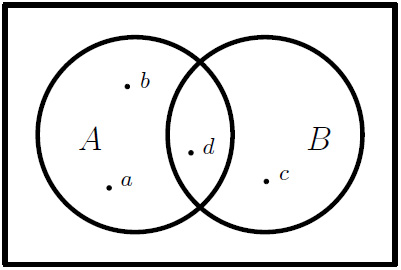 Figure 1.7 – Two sets with some elements

Sets A and B are disjoint (or mutually exclusive) if A

. In other words, the sets share no elements in common.

Example: Even and odd numbers

, since no number is both odd and even.

The union of E and O make up the set of all-natural numbers, E

De Morgan's laws state how mathematical concepts are related through their opposites. In set theory, these laws make use of complements to address the intersection and union of sets.

De Morgan's laws can be written as follows: 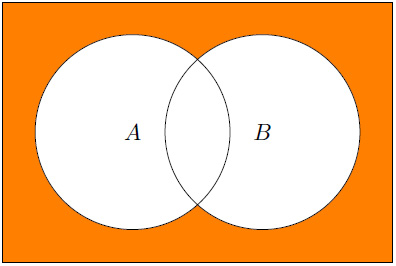 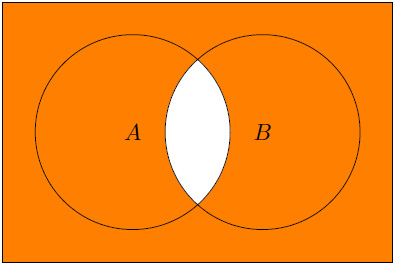 Let's now look at the proof of this theorem:

B), which means x

B)C is a subset of AC

BC is a subset of (A

B)C is a subset of AC

BC and vice versa, (A

The proof of this result is similar and is left as an exercise for the reader.

B)C is an element of AC

BC, and to show that any element of AC

BC is an element of (A

B)C, which establishes that the two sets are the same.

The cardinality, or size, of a set A is the number of elements in the set and is denoted |A|.

The cardinalities of some sets are computed here:

With our knowledge of set theory, we can now move on to learn about relations between different sets and functions, which help us to map each element from a set to exactly one element in another set.

"Gentlemen, mathematics is a language."

More informally, a relation pairs element of X with one or more elements of Y.

As the definitions reveal, functions are relations, but must satisfy a number of additional assumptions, in other words, every element of X is mapped to exactly 1 element of Y.

Relation r is not a function because it maps 3 to both 2 and 6. However, s is a function with domain X since it maps each element of X to exactly one element of Y.

Elementary algebra courses tend to focus on specific sorts of functions where the domain and range are intervals of the real number line. Domain values are usually denoted by x and values in the range are denoted by y because the set of ordered pairs (x, y) that satisfy the equation y = f(x) plotted on the Cartesian xy-plane form the graph of the function, as can be seen in the following diagram: 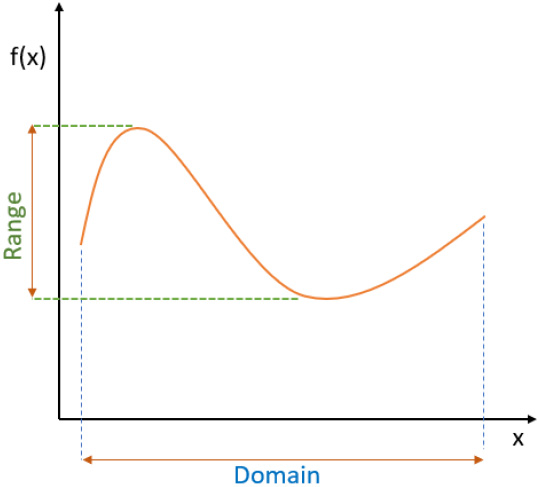 While this typical type of functions may be familiar to most readers, the concept of a function is more general than this. First, the input or the output is required to be a number. The domain of a function could consist of any set, so the members of the set may be points in space, graphs, matrices, arrays or strings, or any other types of elements.

In Python and most other programming languages, there are blocks of code known as "functions," which programmers give names and will run when you call them. These Python functions may or may not take inputs (referred to as "parameters") and return outputs, and each set of input parameters may or may not always return the same output. As such, it is important to note Python functions are not necessarily functions in the mathematical sense, although some of them are.

This is an example of conflicting vocabulary in the fields of mathematics and computer science. The next example will discuss some Python functions that are, and some that are not, functions in the mathematical sense.

Consider the sort() Python function, which is used for sorting lists. See this function applied to two lists – one list of numbers and one list of names:

In each case, the sort() function sorts the list in ascending order by default (with respect to numerical order or alphabetical order).

Furthermore, we can say that sort() applies to any lists and is a function in the mathematical sense. Indeed, it meets all the criteria:

Consider now the Python function random, shuffle(), which takes a list as an input and puts it into a random order. (Just like the shuffle option on your favorite music app!) Refer to the following code:

In addition, we have established some common language and notation of importance for discrete mathematics in the form of set notation, which will allow us to refer to mathematical objects with ease, count the size of sets, represent them as Venn diagrams, and much more. Beyond this, we learned about a number of operations that allow us to manipulate sets by combining them, intersecting them, and finding complements. These give rise to some of the foundational results in set theory in De Morgan's laws, which we will make use of in later chapters.

Lastly, we took a look at the ideas of functions and relations, which map mathematical objects such as numbers to one another. While certain types of functions may be familiar to the reader from high school or secondary school, these familiar functions are typically defined on continuous domains. Since we focus on discrete, rather than continuous, sets in discrete mathematics, we drew the distinction between the familiar idea and a new one we need in this field. Similarly, we showed the difference between functions in mathematics and functions in Python and saw that some Python "functions" are mathematical functions, but others are not.

In the remaining four chapters of Part I: Core Concepts of Discrete Mathematics, we will fill our discrete mathematics toolbox with more tools, including logic in Chapter 2, Formal Logic and Constructing Mathematical Proofs, numerical systems, such as binary and decimal, in Chapter 3, Computing with Base n Numbers, counting complex sorts of objects, including permutations and combinations, in Chapter 4, Combinatorics Using SciPy, and dealing with uncertainty and randomness in Chapter 5, Elements of Discrete Probability. With this array of tools, we will be able to consider more and more real-world applications of discrete mathematics. 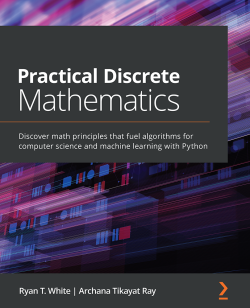