PHP 7 comes with a myriad of new features and great tools to optimize your code and make your code perform faster than in previous versions. Most importantly, it allows you to maintain high traffic on your websites with low-cost hardware and servers through a multithreading web server.

This book demonstrates intermediate to advanced PHP techniques with a focus on PHP 7. Each recipe is designed to solve practical, real-world problems faced by PHP developers like yourself every day. We also cover new ways of writing PHP code made possible only in version 7. In addition, we discuss backward-compatibility breaks and give you plenty of guidance on when and where PHP 5 code needs to be changed to produce the correct results when running under PHP 7. This book also incorporates the latest PHP 7.x features.

By the end of the book, you will be equipped with the tools and skills required to deliver efficient applications for your websites and enterprises.

This chapter is designed as a quick start that will get you up and running on PHP 7 so that you can start implementing the recipes right away. The underlying assumption for this book is that you already have a good knowledge of PHP and programming. Although this book will not go into detail about the actual installation of PHP, given that PHP 7 is relatively new, we will do our best to point out the quirks and gotchas you might encounter during a PHP 7 installation.

There are three primary means of acquiring PHP 7:

The three methods are listed in order of difficulty. However, the first approach, although tedious, will give you the most finite control over extensions and options.

In order to utilize this approach, you will need to have a C compiler available. If you are running Windows, MinGW is a free compiler that has proven popular. It is based on the GNU Compiler Collection (GCC) compiler provided by the GNU project. Non-free compilers include the classic Turbo C compiler from Borland, and, of course, the compiler that is preferred by Windows developers is Visual Studio. The latter, however, is designed mainly for C++ development, so when you compile PHP, you will need to specify C mode.

When compiling from a terminal window or command line, the normal procedure is as follows:

For information on configuration options (that is, when running configure), use the help option:

Errors you might encounter during the configuration stage are mentioned in the following table:

As the title implies, pre-compiled binaries are a set of binary files that somebody else has kindly compiled from PHP 7 source code and has made available.

In the case of Windows, go to http://windows.php.net/. You will find a good set of tips in the left column that pertain to which version to choose, thread safe versus non-read safe, and so forth. You can then click on Downloads and look for the ZIP file that applies to your environment. Once the ZIP file has been downloaded, extract the files into the folder of your choice, add php.exe to your path, and configure PHP 7 using the php.ini file.

To install the pre-compiled binaries on a Mac OS X system, it is best to involve a package management system. The ones recommended for PHP include the following:

AMP refers to Apache, MySQL, and PHP (also Perl and Python). The * refers to Linux, Windows, Mac, and so on (that is, LAMP, WAMP, and MAMP). This approach is often the easiest, but gives you less control over the initial PHP installation. On the other hand, you can always modify the php.ini file and install additional extensions to customize your installation as needed. The following table summarizes a number of popular *AMP packages:

In the preceding table, we've enlisted the *AMP packages where * is replaced by W for Windows, M for Mac OS X, and L for Linux.

When you install a pre-compiled binary from a package, only core extensions are installed. Non-core PHP extensions must be installed separately.

It's worth noting that PHP 7 installation on cloud computing platforms will often follow the installation procedure outlined for pre-compiled binaries. Find out if your cloud environment uses Linux, Mac, or Windows virtual machines, and then follow the appropriate procedure as mentioned in this recipe.

It's possible that PHP 7 hasn't yet reached your favorite repository for pre-compiled binaries. You can always install from source, or consider installing one of the *AMP packages (see the next section). An alternative for Linux-based systems is to use the Personal Package Archive (PPA) approach. Because PPAs have not undergone a rigorous screening process, however, security could be a concern. A good discussion on security considerations for PPAs is found at http://askubuntu.com/questions/35629/are-ppas-safe-to-add-to-my-system-and-what-are-some-red-flags-to-watch-out-fo.

General installation considerations, as well as instructions for each of the three major OS platforms (Windows, Mac OS X, and Linux), can be found at http://php.net/manual/en/install.general.php.

Instructions on how to compile a C program using Visual Studio can be found at https://msdn.microsoft.com/en-us/library/bb384838.

Another possible way to test PHP 7 is by using a virtual machine. Here are a couple of tools with their links, which might prove useful:

Aside from unit testing and running PHP directly from the command line, the obvious way to test your applications is to use a web server. For long-term projects, it would be beneficial to develop a virtual host definition for a web server that most closely mirrors the one used by your customer. Creating such definitions for the various web servers (that is, Apache, NGINX, and so on) is beyond the scope of this book. Another quick and easy-to-use alternative (which we have room to discuss here) is to use the built-in PHP 7 web server.

For test purposes, along with the source code for the book, we've provided an SQL file with sample data at https://github.com/dbierer/php7cookbook. The name of the database used in the recipes for this book is php7cookbook.

Unit testing is arguably the most popular means of testing PHP code. Most developers will agree that a solid suite of tests is a requirement for any properly developed project. Few developers actually write these tests. A lucky few have an independent testing group that writes the tests for them! After months of skirmishing with the testing group, however, the remains of the lucky few tend to grumble and complain. In any event, any book on PHP would not be complete without at least a nod and a wink towards testing.

The place to find the latest version of PHPUnit is https://phpunit.de/. PHPUnit5.1 and above support PHP 7. Click on the link for the desired version, and you will download a phpunit.phar file. You can then execute commands using the archive, as follows:

The phar command stands for PHP Archive. The technology is based on tar, which itself was used in UNIX. A phar file is a collection of PHP files that are packed together into a single file for convenience.

When developing PHP using an object-oriented programming (OOP) approach, the recommendation is to place each class in its own file. The advantage of following this recommendation is the ease of long-term maintenance and improved readability. The disadvantage is that each class definition file must be included (that is, using include or its variants). To address this issue, there is a mechanism built into the PHP language that will autoload any class that has not already been specifically included.

The minimum requirement for PHP autoloading is to define a global __autoload() function. This is a magic function called automatically by the PHP engine when a class is requested but where said class has not been included. The name of the requested class will appear as a parameter when __autoload() is invoked (assuming that you have defined it!). If you are using PHP namespaces, the full namespaced name of the class will be passed. Because __autoload() is a function, it must be in the global namespace; however, there are limitations on its use. Accordingly, in this recipe, we will make use of the spl_autoload_register() function, which gives us more flexibility.

In order to use the autoloader class that we just defined, you will need to require Loader.php. If your namespace files are located in a directory other than the current one, you should also run Loader::init() and supply additional directory paths.

In order to make sure the autoloader works, we'll also need a test class. Here is a definition of /path/to/cookbook/files/Application/Test/TestClass.php:

Next, get an instance of a class that has not already been loaded:

Finally, try to get a fake class that does not exist. Note that this will throw an error:

Very frequently, it is of interest to scan a website and extract information from specific tags. This basic mechanism can be used to trawl the web in search of useful bits of information. At other times you need to get a list of <IMG> tags and the SRC attribute, or <A> tags and the corresponding HREF attribute. The possibilities are endless.

In order to use the new Hoover class, initialize the autoloader (described previously) and create an instance of the Hoover class. You can then run the Hoover::getTags() method to produce an array of tags from the URL you specify as an argument.

Here is a block of code from chap_01_vacuuming_website.php that uses the Hoover class to scan the O'Reilly website for <A> tags: 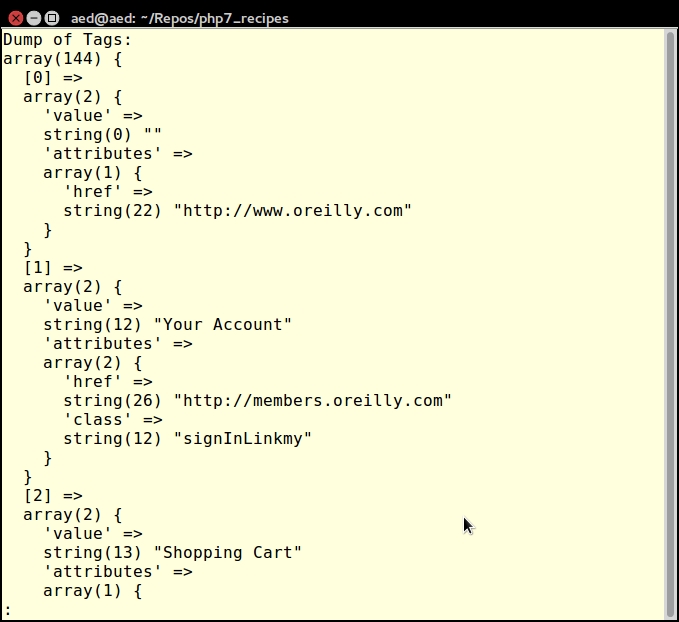 For more information on DOM, see the PHP reference page at http://php.net/manual/en/class.domdocument.php.

Sometimes you need to scan a website, but go one level deeper. For example, you want to build a web tree diagram of a website. This can be accomplished by looking for all <A> tags and following the HREF attributes to the next web page. Once you have acquired the child pages, you can then continue scanning in order to complete the tree.

Next, define a block of code from chap_01_deep_scan_website.php that sets up autoloading (as described earlier in this chapter):

Next, get an instance of our new class:

At this point, you can retrieve URL and tag information from URL parameters. The PHP 7 null coalesce operator is useful for establishing fallback values:

Some simple HTML will display results:

For more information on generators and yield from, please see the article at http://php.net/manual/en/language.generators.syntax.php.

For the most part, PHP 5.x code can run unchanged on PHP 7. There are a few changes, however, that are classified as backwards incompatible. What this means is that if your PHP 5 code is written in a certain way, or uses functions that have been removed, your code will break, and you'll have a nasty error on your hands.

The PHP 5 to PHP 7 Code Converter does two things:

The core of this recipe is the new PHP 7 preg_replace_callback_array() function. What this amazing function allows you to do is to present an array of regular expressions as keys, with the value representing an independent callback. You can then pass the string through a series of transformations. Not only that, the subject of the array of callbacks can itself be an array.

To use the converter, run the following code from the command line. You'll need to supply the filename of the PHP 5 code to be scanned as an argument.

This block of code, chap_01_php5_to_php7_code_converter.php, run from the command line, calls the converter:

Read more Unlock this book with a 7 day free trial.
About the Author
The book contain some interesting things, but they are few. 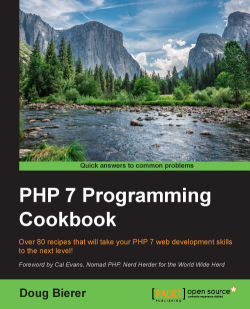