Open source reporting tools and techniques, such as PRD, have been comparable in quality to their commercial counterparts this is largely due to the market's marked tendency to choose open source solutions. PRD is a very powerful tool and in order to take full advantage of it you need to pay attention to the important details.

Pentaho 5.0 Reporting by Example: Beginner’s Guide clearly explains the the foundation and then puts those concepts into practice through step-by-step visual guides. Feeling confident with your newly discovered, desirable, skill you will have the power to create your very own professional reports including graphics, formulas, sub-reports and many other forms of data reporting.

Pentaho 5.0 Reporting By Example: Beginner’s Guide is a step-by-step guide to create high quality, professional reports. Starting with the basics we will explore each feature to ensure a thorough understanding to peel back the curtain and take full advantage of the power that Pentaho puts at our fingertips.

Pentaho 5.0 Reporting By Example: Beginner’s Guide lets you learn everything necessary to work seriously with one of the world’s most popular open source reporting tools. This book will guide you chapter by chapter through examples, graphics, and theoretical explanations so that you feel comfortable interacting with Pentaho Report Designer and creating your own reports.


Chapter 1. What is Pentaho Report Designer?

In this chapter, we will explain what Pentaho Report Designer (PRD) is, and we will discuss its engine and its Graphical User Interface (GUI). We will also discuss the advantages that its open source license entails.

We will describe the two most common uses of PRD, which are embedding in Java projects and publishing to the Pentaho BA Server.

We will make a brief review of the landmarks in the evolution of PRD and its different versions.

At the end of the chapter, we will display a series of PRD reports in order to show the scope of the potential capacities that PRD possesses.

Pentaho Reporting is a technology that allows you to design and build reports for the Pentaho BA platform and other application servers. Pentaho Report Designer (PRD) is a graphics tool that implements the report-editing function. The project from which PRD originated was originally called JFreeReport.

PRD is an open source tool licensed under the GNU Lesser General Public License (GNU LGPL). This license provides the four basic freedoms of free software and the GNU GPL. And the L (Lesser) in LGPL indicates that this software can be used as part of or in combination with proprietary software, which provides greater flexibility for different licenses and software to coexist.

For more information about free software and the GNU project, visit http://www.gnu.org/.

To read more about the GNU GPL and GNU LGPL licenses, visit http://www.gnu.org/licenses/licenses.en.html.

PRD contains a Java-based report engine that provides scalability, portability, and integration. Additionally, the editor's UI is implemented with Swing widgets, which give it a friendly, multiplatform look and feel. This UI is very intuitive, and it allows you to become familiar with the tools quickly.

PRD lets you create simple reports, wizard-based reports, advanced reports, reports with charts, subreports, parameterized reports, and others. Once a report has been created, PRD lets you export it in a variety of formats, such as PDF, Excel, HTML, and CSV, or preview it using Swing.

Since the beginning, PRD has benefitted from multiple contributions from the community, and currently the community supporting this project is growing and becoming more stable and contributing regularly in the form of code, wikis, documentation, forums, bug reports, tutorials, and so on.

Here are some interesting links about PRD:

There are various categories that reports can be grouped into. From our perspective, the following categories are the most important:

Information is obtained through data processing. Data can be processed through summary, classification, grouping, and ordering.

The following are some of PRD's principal characteristics:

The following illustration demonstrates before to publish in Pentaho BA Server using MySQL and a presentation in PDF:

The following diagram illustrates after to publish in Pentaho BA Server using PostgreSQL and a presentation in HTML:

Landmarks in the evolution of PRD are as follows:

The evolution of different versions of PRD can be seen in SourceForge via the link http://sourceforge.net/projects/pentaho/files/Report%20Designer/ as follows: 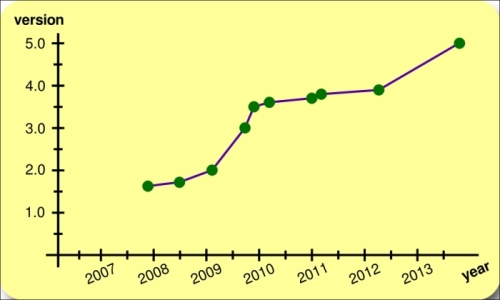 In the following sections, we present a series of PRD reports typically included as examples of Pentaho solutions and in the sample reports of PRD.

The buyer report is found at the following location in the top menu: 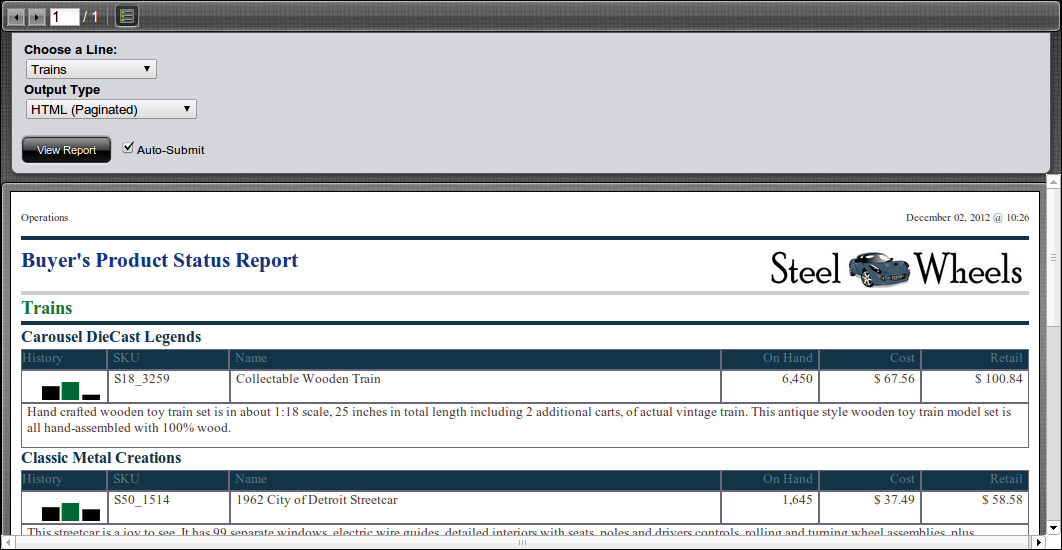 As can be seen in the top part of the report, there are two selectors for passing parameters to the report:

The selectors will then show a report of the product line (Choose a Line:) indicated in the parameter, in this case Trains, and its visualization format will be the one chosen in Output Type, in this case HTML (Paginated).

To show information about each product, this report uses sparklines, text, numbers, and monetary values (in dollars):

Also, an image has been placed in the report title (see the first screenshot of this section).

The income statement report is found at the following location in the top menu: 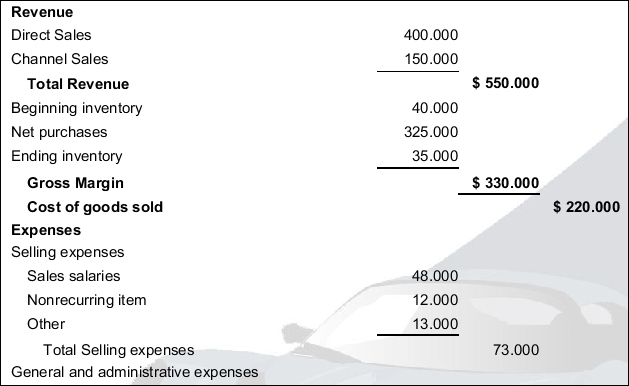 This report shows the current income statement of the company and shows calculations of totals and subtotals, grouping each item in its respective category (Revenue, Cost of Goods, and so on).The default for the Output Type parameter value has been set to PDF, so when it is executed, it will download the file Income Statement.pdf. If you prefer to view the report in another format, you only have to change the value of the Output Type parameter.

This report has an image as a background.

The inventory list report is found at the following location in the top menu:

This report shows information about the stock of products and allows the end user to select one or more product lines that need to be shown.

It uses hyperlinks (drill through) to other reports:

If you click on the values in the field SKU, a new tab will open displaying a report with additional information about this SKU. In this case, if we click on S12_1099, a report shown in the following screenshot will appear: 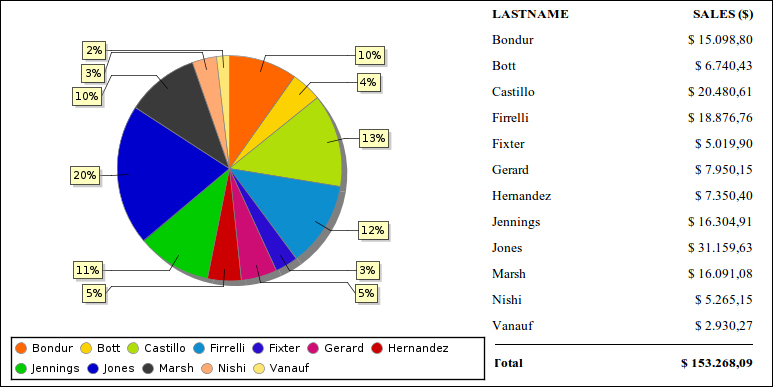 If you click on the values in the field Name, a new web browser tab opens with a web page that searches for Google Images.

This report uses conditional formatting, that is, the background color of the field On Hand is determined according to certain values and conditions. This allows for the viewing of the statuses of the reports through indicators in a very simple way, that is, the indicator is green when the values are good, yellow when they are acceptable, and red when they are bad.

The invoice report is found at the following location in the top menu: 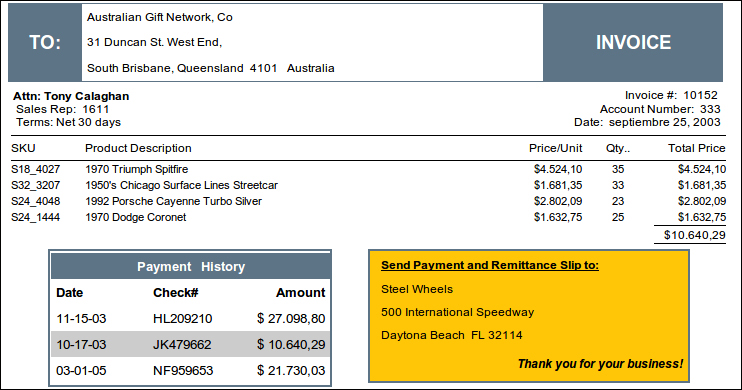 This report shows all the invoices that have been issued to customers. Each invoice is presented on a separate page, and the end user has the ability to select the client they want to analyze.

The product sales report is found at the following location in the top menu: 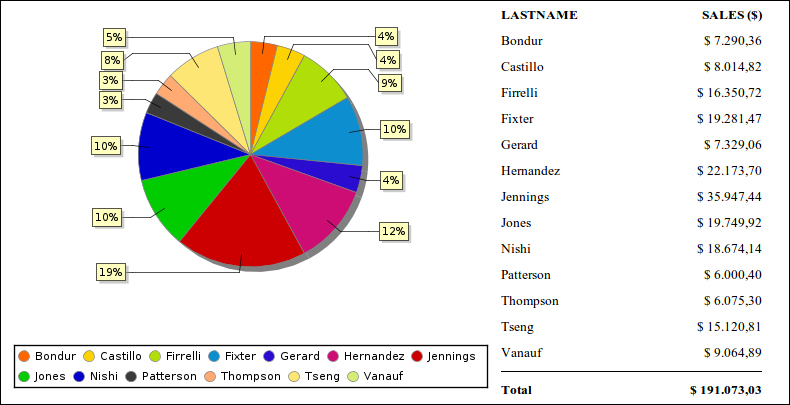 It is important to point out that the parameter selectors are related, that is, once a value is chosen for Line, only products belonging to that line will be shown in the options of the selector Product: 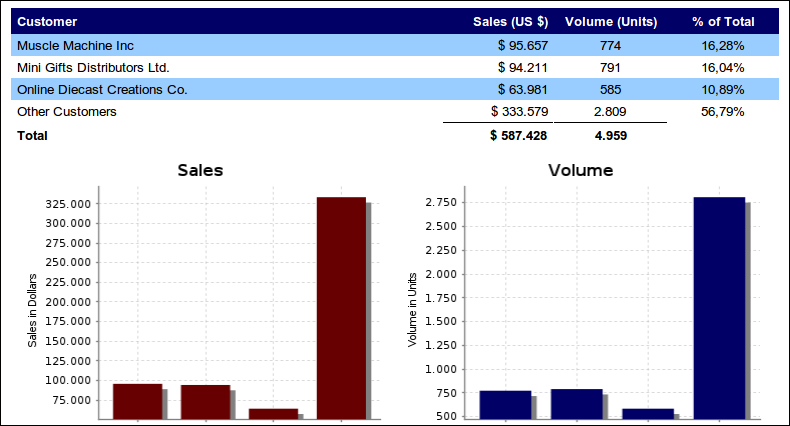 This report shows an analysis of the top N customers; here N can be defined via a parameter. It also displays information amount and percentage of the total sales, and uses a table and two bar charts. 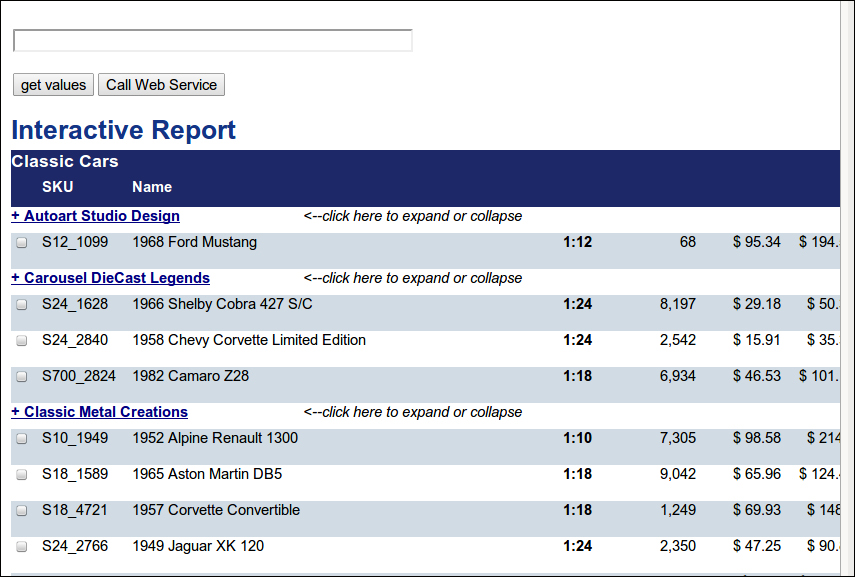 This report shows a list of products grouped by the vendor and provides information about their code, name, purchase price, and so on. Furthermore, it lets us expand or collapse the different groups. That is, if you click on + Autoart Studio Design, all the child nodes collapse.

This report lets us search for the models of the cars we choose in Google Images. For example, choose 1966 Shelby Cobra 427 S/C as shown in the following screenshot:

Click on the get values button. You will see that all the auto models will be shown in the following screenshot:

Click on the Call Web Service button; a new web browser window will open with a web page that searches for Google Web.

In this chapter, we saw that Pentaho Report Designer (PRD) is a very powerful tool for report editing and that it is licensed under the GNU LGPL. We also saw that it has a Java-based report engine and that the editor's UI is implemented with Swing widgets.

We saw that it can be embedded in Java projects in desktop and web applications, and that it can publish reports to the Pentaho BA Server.

We discussed the different types of reports, such as Transactional Reports and Tactical Reports, and their principal characteristics. We also discussed that what makes each of these reports different from others is their data source, their granularity, and their final goal.

We detailed the principal characteristics of PRD through which we were able to show its robustness, flexibility, and interactivity.

We listed each landmark in the development of PRD, following its evolution with each new contribution and functionality. We also showed in a small graph how PRD versions advanced over time.

By the end of this chapter, we are able to appreciate the quantity and variety of reports that PRD lets us create.

In the next chapter we will look at the system requirements to be able to execute PRD. We will download, install, and configure PRD 5.0. Furthermore, we will download and install a database sample.

Read more Unlock this book with a 7 day free trial.
About the Authors
I needed to get on-board with some new technology before my job interview.. why did I chose PACKT, simple .. the book was online ... 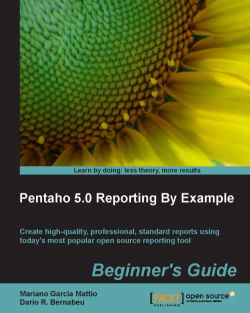