OpenVPN http://www.openvpn.net is a free and open source virtual private network (VPN) program for creating point-to-point or server-to-multiclient encrypted tunnels between host computers. It is capable of establishing direct links between computers across networks and firewalls. It is powerful software, but getting the most from it can be a daunting task.

OpenVPN 2 Cookbook provides solutions to common OpenVPN problems. The book covers everything a system administrator needs to manage and run an OpenVPN network, from point to point networks to troubleshooting.

Each technical aspect is broken down into short recipes that demonstrate solutions with working code, then explain why and how that works. The book is intended to be a desk reference for users with a whole range of experience levels.

The recipes in this chapter will provide an introduction into configuring OpenVPN. The recipes are based on a point-to-point style network, meaning that only a single client can connect at a time.

A point-to-point style network is very useful when connecting to a small number of sites or clients. It is easier to set up, as no certificates or Public Key Infrastructure (PKI) is required. Also, routing is slightly easier to configure, as no client-specific configuration files containing --iroute statements are required.

The drawbacks of a point-to-point style network are:

This recipe will explain the shortest setup possible when using OpenVPN. For this setup two computers are used that are connected over a network (LAN or Internet). We will use both a TUN-style network and a TAP-style network and will focus on the differences between them. A TUN device is used mostly for VPN tunnels where only IP-traffic is used. A TAP device allows full Ethernet frames to be passed over the OpenVPN tunnel, hence providing support for non-IP based protocols such as IPX and AppleTalk.

While this may seem useless at first glance, it can be very useful to quickly test whether OpenVPN can connect to a remote system.

The connection is established and we can again ping the other end of the tunnel.

The server listens on UDP port 1194, which is the OpenVPN default port for incoming connections. The client connects to the server on this port. After the initial handshake, the server configures the first available TUN device with IP address 10.200.0.1 and it expects the remote end (Peer address) to be 10.200.0.2.

The client does the opposite: after the initial handshake, the first TUN or TAP-Win32 device is configured with IP address 10.200.0.2. It expects the remote end (Peer address) to be 10.200.0.1. After this, the VPN is established.

******* WARNING *******: all encryption and authentication features disabled -- all data will be tunnelled as cleartext

Here, the data is not secure: all the data that is sent over the VPN tunnel can be read!

In the previous example, we chose the UDP protocol. For this example, it would not have made any difference if we had chosen the TCP protocol, provided that we do that on the server side (the side without --remote):

And also on the client side:

Forwarding non-IP traffic over the tunnel

It is now possible to run non-IP traffic over the tunnel. For example, if AppleTalk is configured correctly on both sides, we can query a remote host using the aecho command:

A tcpdump -nnel -i tap0 shows that the type of traffic is indeed non-IP based AppleTalk.

This recipe uses OpenVPN secret keys to secure the VPN tunnel. It is very similar to the previous recipe but this time a shared secret key is used to encrypt the traffic between the client and the server.

This example works exactly as the very first: the server listens to the incoming connections on UDP port 1194. The client connects to the server on this port. After the initial handshake, the server configures the first available TUN device with IP address 10.200.0.1 and it expects the remote end (Peer address) to be 10.200.0.2. The client does the opposite.

By default, OpenVPN uses two symmetric keys when setting up a point-to-point connection:

The same set of keys are used on both ends and both keys are derived from the file specified using the --secret parameter.

An OpenVPN secret key file is formatted as follows:

From the random bytes, the OpenVPN Cipher and HMAC keys are derived. Note that these keys are the same for each session!

The same keying material is shared by both sides of the point-to-point connection but those keys that are derived for encrypting and signing the data are different for each side. This recipe explains how to set up OpenVPN in this manner and how the keys can be made visible.

On the client side, we will find the same keys but the 'Encrypt' and 'Decrypt' keys have been reversed:

If you look at the keys carefully, you can see that each one of them is mirrored on the client and the server side.

OpenVPN derives all keys from the static.key file, provided that there is enough entropy (randomness) in the file to reliably generate four keys. All keys generated using the following will have enough entropy:

An OpenVPN static key file is 2048 bits in size. The Cipher keys are each 128 bits, whereas the HMAC keys are 160 bits each, for a total of 776 bits. This allows OpenVPN to easily generate four random keys from the static key file, even if a cipher is chosen that requires a larger initialization key.

The same secret key files are used in a client/server setup when the following parameter is used: tls-auth ta.key.

In the very first recipe, we created a tunnel in which the data traffic was not encrypted. To create a completely plain text tunnel, we also disable the HMAC authentication. This can be useful when debugging a bad connection, as all traffic over the tunnel can now easily be monitored. In this recipe, we will look at how to do this. This type of tunnel is also useful when doing performance measurements, as it is the least CPU-intensive tunnel that can be established.

As we are not using any encryption, no secret keys are needed.

With this setup, absolutely no encryption is performed. All the traffic that is sent over the tunnel is encapsulated in an OpenVPN packet and then sent "as-is".

To actually view the traffic, we can use tcpdump:

Point-to-point style networks are great if you want to connect two networks together over a static, encrypted tunnel. If you only have a small number of endpoints (fewer than four), then it is far easier than using a client/server setup as described in Chapter 2, Client-server IP-only Networks.

For this recipe, we use the following network layout: 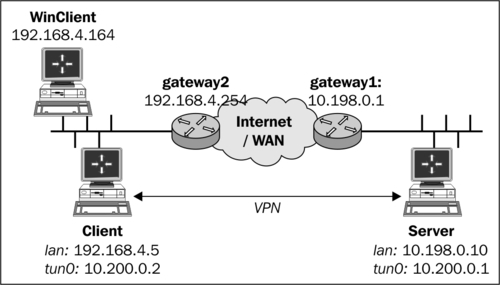 In our network setup, the LAN we want to reach is behind the OpenVPN client, so we have to add a route to the server:

On the client side, we need to do two things:

On the openvpn-users mailing list, a large number of the problems reported have to do with routing issues. Most of them have little to do with the OpenVPN itself but more with understanding the routing and the flow of packets over the network. Chapter 8, Troubleshooting OpenVPN: Routing Issues, provides some recipes to diagnose and fix the most common routing problems.

It is also possible to add the appropriate routes when the tunnel first comes up. This can be done using the --route statement:

Note that on the client LAN the route back to the server still has to be set manually.

Configuration files versus the command-line

The connection is established:

Hence, the following option overruled the line 'port 1194' from the configuration file:

However, some options can be specified multiple times, in which case the first occurrence "wins". In that case, it is also possible to specify the option before specifying the --config directive.

Here is another example to show the importance of the ordering of the command-line parameters:

This produces the exact same connection log as shown before. The 'verb 3' from the client.conf configuration file overruled the --verb 0 as specified on the command line. However, with the following command line:

This shows all the other messages that have been muted.

Some of the newer features of OpenVPN 2.1 deviate slightly from this principle, notably the <connection> blocks and the inline certificates. See Chapter 12, OpenVPN 2.1 specifics for more details.

In this recipe, we set up a complete site-to-site network, using most of the built-in security features that OpenVPN offers. It is intended as a "one-stop-shop" example of how to set up a point-to-point network.

We use the following network layout:

Make sure routing (IP forwarding) is configured on both the server and client.

The client and server configuration files are very similar:

Here is the set of configuration options:

They are used to make the connection more robust and secure, as follows:

This point-to-point setup can also be used to evade restrictive firewalls. The data stream between the two endpoints is not recognizable and very hard to decipher. When OpenVPN is run in client/server (see Chapter 2, Multi-client TUN-style Networks), the traffic is recognizable as OpenVPN traffic due to the initial TLS handshake.

For a small number (less than four) of fixed endpoints, a point-to-point setup is very flexible. In this recipe, we set up three OpenVPN tunnels between three sites, including routing between the endpoints. By setting up three tunnels, we create a redundant routing so that all sites are connected even if one of the tunnels is disrupted.

We use the following network layout: 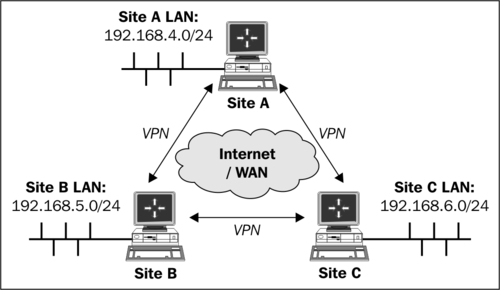 Install OpenVPN 2.0 or higher on two computers. Make sure the computers are connected over a network. In this recipe, the tunnel endpoints were running CentOS 5 Linux or Fedora 13 Linux and OpenVPN 2.1.1. Make sure that the routing (IP forwarding) is configured on all the OpenVPN endpoints.

First, we start all the listener tunnels:

These are followed by the connector tunnels:

And with that, our three-way site-to-site network is established.

It can clearly be seen that the number of configuration files gets out of hand too quickly. In principle, two tunnels would have been sufficient to connect three remote sites, but then there would have been no redundancy.

With the third tunnel and with the configuration options:

There are always 2 routes to each remote network.

This setup has the advantage that if one tunnel fails, then after 60 seconds, the connection and its corresponding routes are dropped and are restarted. The backup route to the other network then automatically takes over and all three sites can reach each other again.

When the "direct" tunnel is restored the direct routes are also restored and the network traffic will automatically choose the best path to the remote site.

In this recipe, we connect three remote sites. This results in six different configuration files that provide the limitations of the point-to-point setup. In general, to connect N possible sites with full redundancy, you will have N * ( N – 1 ) configuration files. This is manageable for up to four sites, but after that, a server/multiple-client setup as described in the next chapters is much easier.

To increase the availability of the networks, it is better to run a Routing Protocol such as RIPv2 or OSPF. Using a routing protocol, the failing routes are discovered much faster, resulting in less network downtime.

Read more Unlock this book with a 7 day free trial.
About the Author
Don’t want to answer this auestion!

4
15 August 2016 jroehrl
I like this book. I purchased it as an electronic copy to the hard copy version that I already own. 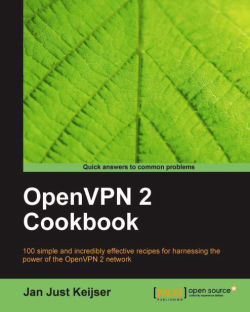