Networking in OpenStack has evolved from Nova Network to Neutron. This has resulted in a rich suite of networking services available to OpenStack users and administrators. Advanced services such as routers, firewall, and load balancers use building blocks such as network and subnets. Recent improvements support powerful customization using plugins. The evolution of Neutron continues as it integrates with tools like Ceilometer and Heat.

This book will explore the built-in capabilities of Neutron to effectively deploy cloud solutions. You will begin with the most fundamental constructs of OpenStack Networking for switching and routing. You will then learn how to provide your tenants with services like firewalls and load-balancers. The step-by-step recipes will help you configure and troubleshoot networking problems in your cloud. This book will also introduce you to advanced topics like Ceilometer, Heat, and other upcoming tools in OpenStack

In this chapter, we will show you the following set of recipes covering the different ways to create and manage the core Neutron entities, namely Network, Subnet, and Port:

Businesses are increasingly adopting cloud-based solutions for their IT requirements. This move to cloud started with the server virtualization where a hardware server ran as a virtual machine on a hypervisor.

The server hardware connects to the Network switches using Ethernet and IP to establish Network connectivity. However, as servers move from physical to virtual, the Network boundary also moves from the physical network to the virtual network. As the cloud platforms leverage virtualization, it is important that they support the physical and virtual networking effectively.

OpenStack is an open source cloud platform that helps build public and private clouds at scale. In OpenStack, the name for the OpenStack networking project is Neutron. The functionality of Neutron can be classified as core and service. In the rest of the book, the terms Neutron and OpenStack networking are used interchangeably.

Neutron also works with the telemetry module called Ceilometer in order to let the cloud operators monitor the health of the OpenStack Networks.

In order to implement the recipes covered in this chapter, you will need an OpenStack setup, as described here: 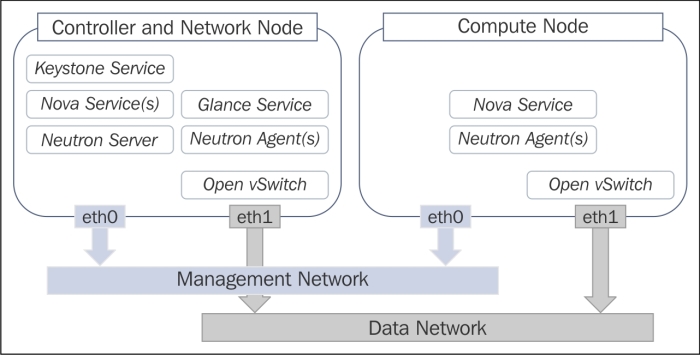 This setup has one compute node and one node for the controller and networking services. For this chapter, you can also set up a single all-in-one environment. This book is based on OpenStack on the Ubuntu platform. For other platforms, such as Red Hat, the dashboard may have a different theme but there should not be any difference in the functionality.

In order to create a Network and Subnet, you will need the following information, minimally:

The preceding steps covered the most commonly used workflow to create a Network and Subnet using Horizon.

The Network and Subnet entities represent two basic Networking functionalities. A Network defines the Layer 2 (L2) boundary for all the instances that are associated with it. All the virtual machines in a Network are a part of the same L2 broadcast domain. The Subnet, on the other hand, is the range of IP addresses that are assigned to the virtual machines on the associated Network. OpenStack Neutron configures the DHCP server with this IP address range and it starts one DHCP server instance per Network, by default. OpenStack Neutron also allocates one IP to act as the gateway IP unless the user provides a specific IP address for the gateway.

As you can see from the UI, it is possible to create a Network without a Subnet. You can choose between the IPv4 or IPv6 addressing schemes. The Subnet Details section allows operators to enable or disable DHCP for the Network. Optionally, you can also specify the DNS servers and IP pools.

Viewing the details of a Network using Horizon

Once a Network and Subnet have been created, you can use Horizon to view useful details such as the ID, Network Type, and Gateway IP. You can also view the topology of the Network that you just created.

For this recipe, you need to know the name of the Network whose details you want to view.

Note that if you create and view the Network with a non-administrative role, some of the fields may not be displayed.

While creating the Subnet, we did not select any gateway IP, so Neutron will automatically select the first IP address in the Subnet and configure this as the gateway IP for that Subnet.

Associating a Network to an instance using Horizon

This recipe showed you that as a part of instance creation, the Horizon GUI allows users to choose the Network to which the instance needs to be associated.

In response to the create Port request, Neutron will ensure that the virtual Network on the hypervisor server is configured so as to provide connectivity to the virtual machine. For the very first instance created on the Network, the Neutron server will also start a DHCP process on the Network node. This happens when DHCP is enabled on the corresponding Network. Once a virtual machine boots up, it will send a DHCP request. In response to this request, the DHCP server for that Network will respond with an IP address.

If there is exactly one Network for a given tenant, then the dashboard automatically selects this Network when an instance is created. Additionally, note that the tenants can associate more than one Network to an instance. This will create multiple interfaces in the virtual machine.

We have seen how to use the Horizon dashboard to create a Network. Let's now do the same with OpenStack CLI. Several CLI commands offer additional capabilities when compared to the dashboard. So it is good to develop a sound knowledge of the CLI commands.

You will need the following information to create a Network using CLI:

The next set of steps will show you how to use the Neutron CLI commands to create a Network:

When the user executes the neutron net-create command, the user name and tenant name attributes are taken from the shell environment variables that were initialized at the beginning. Neutron creates the Network with this user and tenant (or project). However, once the --tenant-id option is used, the Network is created on behalf of the tenant whose ID is specified.

Users can specify several other arguments while creating Networks. These options are provider:network_type, --provider:segmentation_id, and router:external. While we will be taking a closer look at these parameters in the subsequent chapters, it is important to note that some of these options are available only if users have the administrative privilege.

To view the details of a specific Network, you can use the neutron net-show command.

You will need the following information to get started:

The next set of steps will show you how to use Neutron CLI to create a Subnet:

Creating a Port without an associated instance using the OpenStack CLI

Port is another building block in OpenStack Neutron. You will not find a way to create a Port using the Horizon dashboard. As we saw earlier in the Associating a Network to an instance using Horizon recipe, a Port is created implicitly as a part of the create instance operation from the dashboard. However, using CLI, some advanced networking configuration can be accomplished. This recipe shows you how to create a Port using OpenStack CLI.

You will need the following information to get started:

The next set of steps will show you how to use Neutron CLI to create a Port:

A Port primarily represents an endpoint in a Network. The most common Ports in an OpenStack environment are the virtual interfaces in a virtual machine.

When the neutron port-create command is executed, OpenStack Neutron allocates a unique MAC address to the Port. The Network name argument effectively helps Neutron in identifying a Subnet and then Neutron assigns an IP address to the Port from the list of available IP addresses in the Subnet.

The post-create request is also the most common trigger to configure the physical and virtual Networks using the appropriate drivers.

Associating a Port to an instance using OpenStack CLI

The previous recipe showed you how to create a Port using CLI. The next recipe shows you how we can use an existing Port as part of the instance creation command.

For this recipe, you will have to identify the Port that you want to associate with an instance. For the instance creation itself, the software image needs to be identified.

The next set of steps will show you how to use the Nova and Neutron CLI commands to create an instance that uses an existing Port:

This recipe demonstrated how to associate a Port to an instance. At the end of the recipe, we can see that the MAC and IP addresses for this virtual interface (eth0) match those of the Port that we used in the nova boot command.

We have seen that Neutron assigns an IP address and MAC address to a Port during their creation. When users execute the nova boot command with the --nic option, then Nova takes the IP and MAC addresses of the Port and uses this information to configure the virtual interface of the instance.

This technique of creating a Port prior to the instance creation is helpful if a specific IP address needs to be assigned to an instance or virtual machine. While we will cover this in another recipe later in the book, it is important to note that this capability is not available using the Horizon dashboard.

Configuring the networking quota in OpenStack

Quotas are limits defined in OpenStack to ensure that the system resources and capacity are used in a systematic manner. Different users can be given different quota limits based on their requirement and priority. In this recipe, we will show you how to configure a quota related to networking at a project level and for the whole system.

The setting up and enforcement of the quota are done at the project level. If any user in the project tries to exceed the allotted quota, the system will reject the corresponding request. To configure the quota-related parameters, you need to have a good idea about the capacity, scale, and performance requirements of your OpenStack-based cloud.

The following steps will show you how to configure the networking-related quota:

All the quota settings are stored on a per project (tenant) basis. During the creation of a project using CLI or Horizon, OpenStack (Keystone) fetches the system-wide default quotas from the configuration files and associates them to the project (or tenant). Hereafter, even if the system-wide quotas are changed, the project-level quotas do not change automatically. However, the project-level quotas can be changed anytime using Horizon or CLI, and these changes take effect immediately.

All the OpenStack commands and API calls are checked against the project-level quotas. If any commands or API calls violate the limits, they will be rejected with an appropriate error.