OpenCV Computer Vision with Python shows you how to use the Python bindings for OpenCV. By following clear and concise examples, you will develop a computer vision application that tracks faces in live video and applies special effects to them. If you have always wanted to learn which version of these bindings to use, how to integrate with cross-platform Kinect drivers, and how to efficiently process image data with NumPy and SciPy, then this book is for you.

This book has practical, project-based tutorials for Python developers and hobbyists who want to get started with computer vision with OpenCV and Python. It is a hands-on guide that covers the fundamental tasks of computer vision, capturing, filtering, and analyzing images, with step-by-step instructions for writing both an application and reusable library classes.

This chapter is a quick guide to setting up Python 2.7, OpenCV, and related libraries. After setup, we also look at OpenCV's Python sample scripts and documentation.

The following related libraries are covered:

For this book's purposes, OpenNI and SensorKinect can be considered optional. They are used throughout Chapter 5, Separating Foreground/Background Regions Depth, but are not used in the other chapters or appendices.

At the time of writing, OpenCV 2.4.3 is the latest version. On some operating systems, it is easier to set up an earlier version (2.3.1). The differences between these versions should not affect the project that we are going to build in this book.

Some additional information, particularly about OpenCV's build options and their dependencies, is available in the OpenCV wiki at http://opencv.willowgarage.com/wiki/InstallGuide. However, at the time of writing, the wiki is not up-to-date with OpenCV 2.4.3.

We are free to choose among various setup tools, depending on our operating system and how much configuration we want to do. Let's take an overview of the tools for Windows, Mac, Ubuntu, and other Unix-like systems.

Windows does not come with Python preinstalled. However, installation wizards are available for precompiled Python, NumPy, SciPy, and OpenCV. Alternatively, we can build from source. OpenCV's build system uses CMake for configuration and either Visual Studio or MinGW for compilation.

If we want support for depth cameras including Kinect, we should first install OpenNI and SensorKinect, which are available as precompiled binaries with installation wizards. Then, we must build OpenCV from source.

The precompiled version of OpenCV does not offer support for depth cameras.

Some of the following steps refer to editing the system's Path variable. This task can be done in the Environment Variables window of Control Panel.

On Windows XP, open the Start menu and go to Control Panel | System. Select the Advanced tab. Click on the Environment Variables button.

Now, under System variables, select Path and click on the Edit button. Make changes as directed. To apply the changes, click on all the OK buttons (until we are back in the main window of Control Panel). Then, log out and log back in (alternatively, reboot).

Windows does not come with any compilers or CMake. We need to install them. If we want support for depth cameras, including Kinect, we also need to install OpenNI and SensorKinect.

Let's assume that we have already installed 32-bit Python 2.7, NumPy, and SciPy either from binaries (as described previously) or from source. Now, we can proceed with installing compilers and CMake, optionally installing OpenNI and SensorKinect, and then building OpenCV from source:

For Mac, there are several possible approaches to obtaining standard Python 2.7, NumPy, SciPy, and OpenCV. All approaches ultimately require OpenCV to be compiled from source using Xcode Developer Tools. However, depending on the approach, this task is automated for us by third-party tools in various ways. We will look at approaches using MacPorts or Homebrew. These tools can potentially do everything that CMake can do, plus they help us resolve dependencies and separate our development libraries from the system libraries.

Before proceeding, let's make sure that the Xcode Developer Tools are properly set up:

Now we have the required compilers for any approach.

We can use the MacPorts package manager to help us set up Python 2.7, NumPy, and OpenCV. MacPorts provides Terminal commands that automate the process of downloading, compiling, and installing various pieces of open source software (OSS). MacPorts also installs dependencies as needed. For each piece of software, the dependencies and build recipe are defined in a configuration file called a Portfile . A MacPorts repository is a collection of Portfiles.

Starting from a system where Xcode and its Command Line Tools are already set up, the following steps will give us an OpenCV installation via MacPorts:

Using MacPorts with your own custom packages

With a few extra steps, we can change the way that MacPorts compiles OpenCV or any other piece of software. As previously mentioned, MacPorts' build recipes are defined in configuration files called Portfiles. By creating or editing Portfiles, we can access highly configurable build tools, such as CMake, while also benefitting from MacPorts' features, such as dependency resolution.

Let's assume that we already have MacPorts installed. Now, we can configure MacPorts to use custom Portfiles that we write:

Using Homebrew with ready-made packages (no support for depth cameras)

Homebrew is another package manager that can help us. Normally, MacPorts and Homebrew should not be installed on the same machine.

Starting from a system where Xcode and its Command Line Tools are already set up, the following steps will give us an OpenCV installation via Homebrew:

Using Homebrew with your own custom packages

The package definitions are actually scripts in the Ruby programming language. Tips on editing them can be found in the Homebrew wiki at https://github.com/mxcl/homebrew/wiki/Formula-Cookbook. A script may specify Make or CMake configuration flags, among other things.

To see which CMake configuration flags are relevant to OpenCV, we need to look at its source code. Download the source code archive from http://sourceforge.net/projects/opencvlibrary/files/opencv-unix/2.4.3/OpenCV-2.4.3.tar.bz2/download, unzip it to any location, and read <unzip_destination>/OpenCV-2.4.3/CMakeLists.txt.

After making any edits to the Ruby script, save it.

The customized package can be treated as normal. For example, it can be installed as follows:

Ubuntu comes with Python 2.7 preinstalled. The standard Ubuntu repository contains OpenCV 2.3.1 packages without support for depth cameras. Alternatively, OpenCV 2.4.3 can be built from source using CMake and GCC. When built from source, OpenCV can support depth cameras via OpenNI and SensorKinect, which are available as precompiled binaries with installation scripts.

Using the Ubuntu repository (no support for depth cameras)

We can install OpenCV 2.3.1 and its dependencies using the Apt package manager:

Equivalently, we could have used Ubuntu Software Center, which is Apt's graphical frontend.

Using CMake via a ready-made script that you may customize

Ubuntu comes with the GCC compilers preinstalled. However, we need to install the CMake build system. We also need to install or reinstall various other libraries, some of which need to be specially configured for compatibility with OpenCV. Because the dependencies are complex, I have written a script that downloads, configures, and builds OpenCV and related libraries so that the resulting OpenCV installation has support for depth cameras including Kinect:

Making the choice on other Unix-like systems

The approaches for Ubuntu (as described previously) are likely to work on any Linux distribution derived from Ubuntu 12.04 LTS or Ubuntu 12.10, such as:

On Debian Linux and its derivatives, the Apt package manager works the same as on Ubuntu, though the available packages may differ.

On Gentoo Linux and its derivatives, the Portage package manager is similar to MacPorts (as described previously), though the available packages may differ.

On other Unix-like systems, the package manager and available packages may differ. Consult your package manager's documentation and search for any packages with opencv in their names. Remember that OpenCV and its Python bindings might be split into multiple packages.

Also, look for any installation notes published by the system provider, the repository maintainer, or the community. Because OpenCV uses camera drivers and media codecs, getting all of its functionality to work can be tricky on systems with poor multimedia support. Under some circumstances, system packages might need to be reconfigured or reinstalled for compatibility.

If packages are available for OpenCV, check their version number. OpenCV 2.3.1 or greater is recommended for this book's purposes. Also check whether the packages offer Python bindings and whether they offer depth camera support via OpenNI and SensorKinect. Finally, check whether anyone in the developer community has reported success or failure in using the packages.

If instead we want to do a custom build of OpenCV from source, it might be helpful to refer to the installation script for Ubuntu (discussed previously) and adapt it to the package manager and packages that are present on another system.

Running a few sample scripts is a good way to test that OpenCV is correctly set up. The samples are included in OpenCV's source code archive.

On Windows, we should have already downloaded and unzipped OpenCV's self-extracting ZIP. Find the samples in <unzip_destination>/opencv/samples.

On Unix-like systems, including Mac, download the source code archive from http://sourceforge.net/projects/opencvlibrary/files/opencv-unix/2.4.3/OpenCV-2.4.3.tar.bz2/download and unzip it to any location (if we have not already done so). Find the samples in <unzip_destination>/OpenCV-2.4.3/samples.

Some of the sample scripts require command-line arguments. However, the following scripts (among others) should work without any arguments:

To exit a script, press Esc (not the window's close button).

If we encounter the message, ImportError: No module named cv2.cv, then we are running the script from a Python installation that does not know anything about OpenCV. There are two possible explanations:

The documentation entitled OpenCV 2.1 Python Reference (http://opencv.willowgarage.com/documentation/python/) might show up in Google searches for OpenCV Python API. Avoid this documentation, since it is out-of-date and covers only the old (C-like) Python API.

The documentation is also available as several downloadable PDF files:

If you write code on airplanes or other places without Internet access, you will definitely want to keep offline copies of the documentation.

If the documentation does not seem to answer your question, try talking to the OpenCV community. Here are some sites where you will find helpful people:

Last, if you are an advanced user who wants to try new features, bug-fixes, and sample scripts from the latest (unstable) OpenCV source code, have a look at the project's repository at https://github.com/Itseez/opencv/.

By now, we should have an OpenCV installation that can do everything we need for the project described in this book. Depending on which approach we took, we might also have a set of tools and scripts that are usable to reconfigure and rebuild OpenCV for our future needs.

We know where to find OpenCV's Python samples. These samples cover a different range of functionality than this book's project, but they are useful as additional learning aids.

it is perfect... the ebook is perfect for my students reference...

The book is well structured and easy to understand. The overall format also allows for easy reading of figures and code segments. 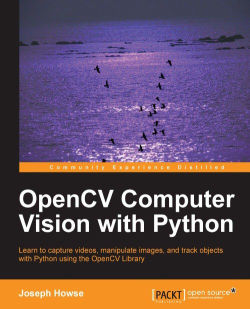