A key technology for building web applications and tooling, Node.js brings JavaScript to the server enabling full-stack development in a common language. This fourth edition of the Node Cookbook is updated with the latest Node.js features and the evolution of the Node.js framework ecosystems.

This practical guide will help you to get started with creating, debugging, and deploying your Node.js applications and cover solutions to common problems, along with tips to avoid pitfalls. You'll become familiar with the Node.js development model by learning how to handle files and build simple web applications and then explore established and emerging Node.js web frameworks such as Express.js and Fastify. As you advance, you'll discover techniques for detecting problems in your applications, handling security concerns, and deploying your applications to the cloud. This recipe-based guide will help you to easily navigate through various core topics of server-side web application development with Node.js.

By the end of this Node book, you'll be well-versed with core Node.js concepts and have gained the knowledge to start building performant and scalable Node.js applications.

The Node.js release policy states that there are two major releases of Node.js per year, one in April and one in October. Major releases include breaking or incompatible API changes, although the Node.js project does try to minimize the number and impact of breaking changes to reduce disruption to users.

Even-numbered major releases of Node.js are promoted to LTS after 6 months. Even-numbered releases are scheduled for release in April and promoted to LTS in October. LTS releases are supported for 30 months. It is recommended to use LTS versions of Node.js for production applications. The purpose of the LTS policy is to provide stability to end users and also to provide a predictable timeline of releases so that users can appropriately manage their upgrades. All LTS versions of Node.js are given codenames, named after elements. Node.js 14 has the LTS codename Fermium.

Odd-numbered major releases are released in October and are only supported for 6 months. Odd-numbered releases are expected to be used to try out new features and test the migration path, but are not generally recommended for use in production applications.

This chapter introduces Node.js – including instructions on how to install the runtime and access the API documentation.

This chapter will cover the following recipes:

This chapter will require access to a Terminal, a browser of your choice, and the internet.

This book will be using Node.js 14 throughout, as it is the latest LTS release at the time of writing. Node.js 14 was released in April 2020, was promoted to LTS in October 2020 and will continue to be supported until April 2023. This recipe will cover how to install Node.js 14 using node version manager (nvm). At the time of writing, nvm is an incubation project of the OpenJS Foundation and provides an easy way to install and update Node.js versions.

You will need to have the appropriate permissions on your device to install nvm. This recipe assumes you're on a UNIX-like platform. If you're on Windows, it should be run under Windows Subsystem for Linux (WSL).

In this recipe, we're going to be installing Node.js 14 using nvm:

nvm is a version manager for Node.js on UNIX-like platforms and supports POSIX-compliant shells. POSIX is a set of standards for operating system compatibility, defined by the IEEE Computer Society.

In the first step of the recipe, we downloaded and executed the nvm installation script. Under the covers, the nvm install script does the following:

nvm supports aliases that can be used to install the LTS versions of Node.js. For example, you can use the $ nvm install --lts command to install the latest LTS release.

If you do not wish to or are unable to use nvm, you can install Node.js manually. Visit the Node.js downloads page at https://nodejs.org/en/download/ to download the appropriate binary for your platform.

The Node.js project provides TAR files for installation on many platforms. To install via a TAR file, you need to download and extract the TAR file, and then add the binary location to your path.

Alongside TAR files, the Node.js project provides an installer for both macOS (.pkg) and Windows (.msi). As a result of installing Node.js manually, you would need to manually install updated versions of Node.js when you require them.

The Node.js project provides comprehensive API reference documentation. The Node.js API documentation is a critical resource for understanding which APIs are available in the version of Node.js that you're using. The Node.js documentation also describes how to interact with APIs, including which arguments a method accepts and the method's return value.

This recipe will show how to access and navigate the Node.js API documentation.

You will need access to a browser of your choice and an internet connection to access the Node.js API documentation.

This recipe is going to demonstrate how to navigate the Node.js API documentation: 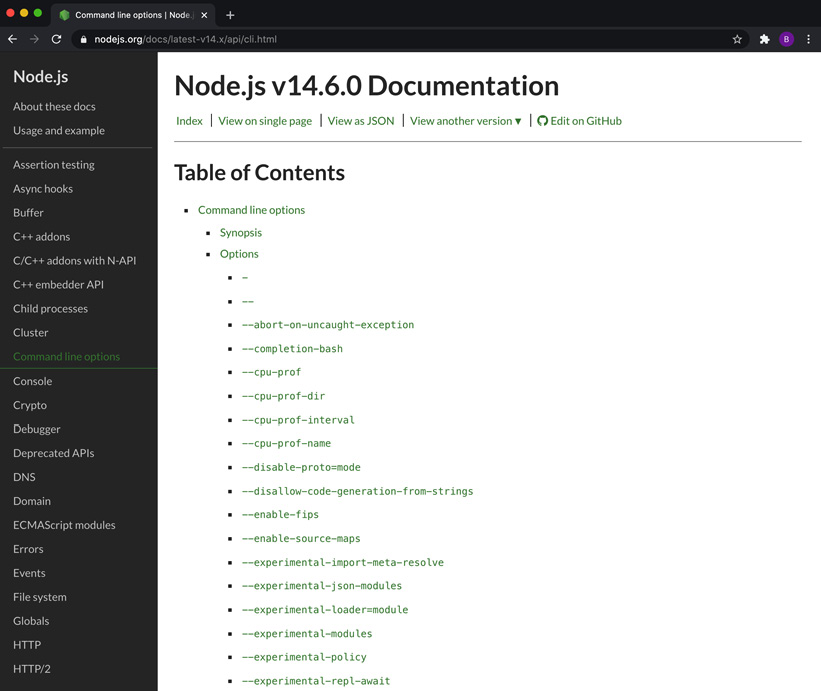 We've learned how to access and navigate the Node.js API documentation.

The API documentation details the usage of the Node.js APIs, including the following:

In some cases, the documentation will provide further information, including a usage example or sample code demonstrating the usage of the API.

The API documentation also details the stability of APIs. The Node.js project defines and uses the following three stability indices:

The Node.js documentation is maintained by the Node.js project in the Node.js core repository. Any errors or suggested improvements can be raised as issues at https://github.com/nodejs/node.

The following is a snippet from the Node.js 14 CHANGELOG.md file: 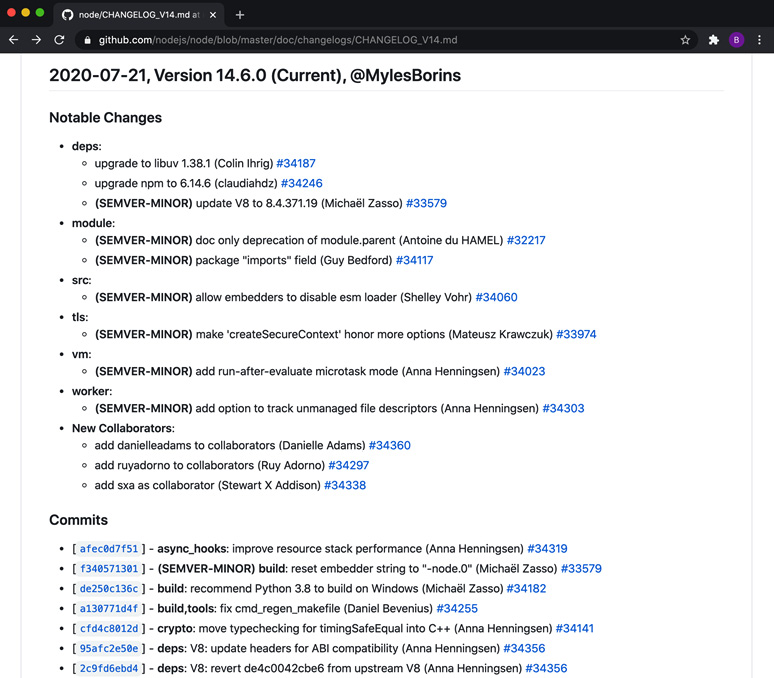 Node.js CHANGELOG.md files can be used as a reference when upgrading Node.js, to help understand what updates and changes are included in the new version.

New major versions of Node.js tend to include a significant upgrade to the V8 engine. Node.js version 14.0.0 was released with V8 version 8.1. But at the time of writing, Node.js 14 has already been updated to include V8 version 8.4.

In this recipe, we will be using the Node.js Read Eval Print Loop (REPL) to test out the newer JavaScript features that have been made available in Node.js 14:

Using the REPL, we've explored two of the new JavaScript syntaxes that are available in Node.js 14.

Every 6 weeks, a new version of Google Chrome's V8 engine is released. Node.js 14 will continue to incorporate updates into V8, provided they are Application Binary Interface (ABI)-compatible. An ABI describes how programs can interact with functions and data structures via compiled programs. It can be considered similar to a compiled version of an Application Programming Interface (API).

Once there is a release of V8 that is no longer ABI compatible, the specific release line of Node.js will be fixed on its current version of V8. However, specific V8 patches and fixes may continue to be applied directly to that Node.js release line. Node.js 12 is now fixed on V8 version 7.8, whereas Node.js 14, at the time of writing, is at V8 version 8.4.

The V8 JavaScript engine internally compiles JavaScript using Just-In-Time (JIT) compilation. JIT compilation speeds up the execution of JavaScript. While V8 is executing JavaScript, it obtains data about the code that is being executed. From this data, the V8 engine can make speculative optimizations. Speculative optimizations anticipate the upcoming code based on the code that has recently been executed. This allows the V8 engine to optimize for the upcoming code.

The V8 blog provides announcements of new V8 releases and details the new features and updates to V8. The V8 blog can be accessed at https://v8.dev/blog. 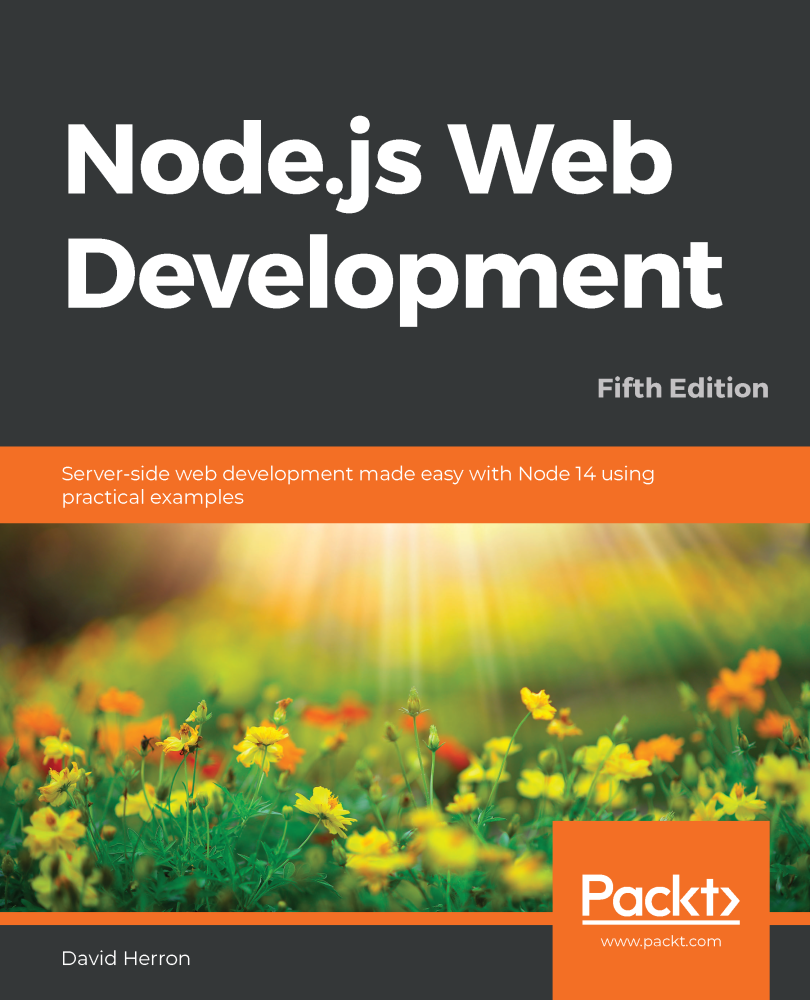 Build scalable web applications using Node.js, Express.js, and the latest ECMAScript techniques, along with deploying applications with AWS and Docker with this updated fifth edition

Build scalable web applications using Node.js, Express.js, and the latest ECMAScript techniques, along with deploying applications with AWS and Docker with this updated fifth edition 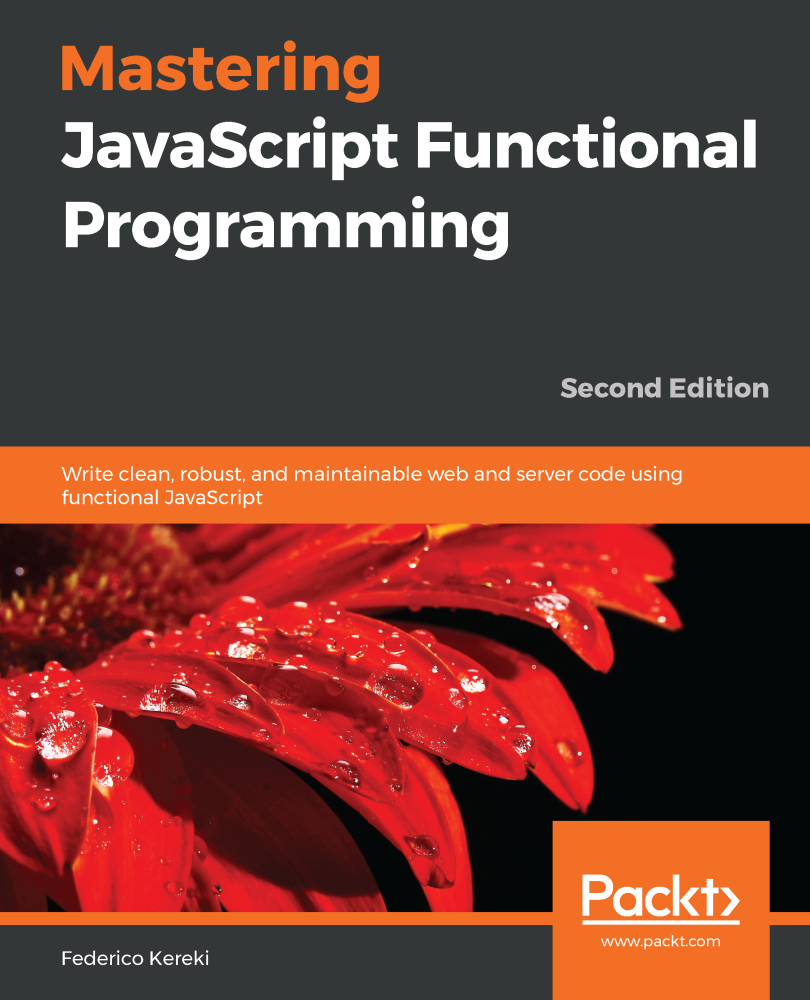 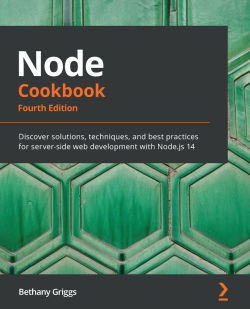