Network security plays an important role in securing IT infrastructures against attacks. The increased demand for computer systems, and the ever-evolving internet, has allowed people to find vulnerabilities and infiltrate into organizations through their network. Network Protocol Security will help you safeguard your organization's network and networking devices.

This book is a comprehensive guide that begins with the basics, gradually increases in complexity, and later takes you through advanced concepts. You will start by understanding the structure of data network protocols and devices as well as breaches. In addition to this, you’ll become familiar with attacking tools and scripts that take advantage of these breaches. After covering the basics, you will learn attacks that target networks and network devices. Next, you will perform eavesdropping, learn data analysis, and use behavior analysis for network forensics. Toward the concluding chapters, you will understand network protocols and how to use methods and tools you learned in the previous parts to attack and protect these protocols. 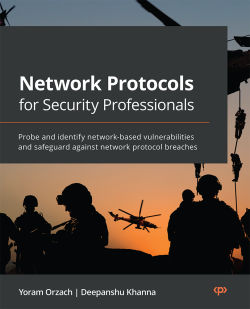