Whether you are new to JUnit testing and mocking or a seasoned Mockito expert, this book will provide you with the skills you need to successfully build and maintain meaningful JUnit test cases and effectively mock external dependencies. At the beginning, this book deals with dummy and fake objects and then moves on to exploring stubs followed by an example on spying. Then, it will show you how to make legacy code testable, mock external dependencies using Mockito, and write testable code for greenfield projects. You will also gain an insight on the concepts of Service-oriented Architecture (SOA) as well as understand how to unit test RESTful web services with Mockito. By sequentially working through the steps in each chapter, you will quickly learn the features of Mockito.

Mockito Essentials will ensure your success with these concepts, tools, and frameworks.

"I never make stupid mistakes. Only very, very clever ones."

It is very difficult to find stupid mistakes, but it's even more daunting when you are trying to figure out the clever ones. Debugging an application to know how to fix a problem is very expensive and time-consuming. Automated unit tests provide an extremely effective mechanism for catching regressions, especially when combined with test-driven development; it creates a test safety net for the developers.

The Working with unit tests section introduces you to test automation and describes the characteristics of a good unit test.

A common understanding of unit testing is the testing of the smallest possible part of software, such as a single method, a small set of related methods, or a class.

In reality, we do not test methods; we test a logical unit and its behavior instead. Logical units can extend to a single method, to an entire class, or a collaboration of multiple classes.

A unit test verifies an assumption about the behavior of the system. Unit tests should be automated to create a safety net so that the assumptions are verified continuously and a quick feedback can be provided if anything goes wrong.

The following are the benefits of test automation:

A unit test should exhibit the following characteristics:

As per the preceding best practices, a test should be executed as fast as possible. Then what should you do if you need to test data access logic or file download code? Simple, do not include the tests in an automated test suite. Consider such tests as slow tests or integration tests. Otherwise, your continuous integration cycle will run for hours. Slow tests should still be automated. However, they may not run all the time, or rather they should be run out of the continuous integration feedback loop.

You cannot automate a unit test if your API class depends on slow external entities, such as data access objects or JNDI lookup. Then, you need test doubles to isolate the external dependencies and automate the unit test.

The next section covers test doubles.

We all know about stunt doubles in movies. A stunt double or dummy is a trained replacement used for dangerous action sequences in movies, such as a fight sequence on the top of a burning train, jumping from an airplane, and so on, mainly fight scenes. Stunt doubles are used to protect the real actors, are used when the actor is not available, or when the actor has a contract to not get involved in stunts.

Test doubles act as stunt doubles. They are a skilled replacement of the collaborator objects and allow you to unit test code in isolation from the original collaborator.

Test doubles can be created to impersonate collaborators and can be categorized into the types, as shown in the following diagram:

In movies, sometimes a double doesn't perform anything; they just appear on the screen. One such instance would be standing in a crowded place where the real actor cannot go, such as watching a soccer match or tennis match. It will be very risky for the real actor to go to a full house, but the movie's script needs it.

In this book, we will write the code and JUnit tests in the Eclipse editor. You can download Eclipse from the following URL:

A stub delivers indirect inputs to the caller when the stub's methods are called. Stubs are programmed only for the test scope. Stubs may record other information such as how many times they are invoked and so on.

Unit testing a happy path is relatively easier than testing an alternate path. For instance, suppose that you need to simulate a hardware failure or transaction timeout scenario in your unit test, or you need to replicate a concurrent money withdrawal for a joint account use case—these scenarios are not easy to imitate. Stubs help us to simulate these conditions. Stubs can also be programmed to return a hardcoded result; for example, a stubbed bank account object can return the account balance as $100.00.

Stubs are very handy to impersonate error conditions and external dependencies (you can achieve the same thing with a mock; this is just one approach). Suppose you need to test a code that looks up a JNDI resource and asks the resource to return some value. You cannot look up a JNDI resource from a JUnit test; you can stub the JNDI lookup code and return a stubbed object that will give you a hardcoded value.

A spy secretly obtains the information of a rival or someone very important. As the name suggests, a spy object spies on a real object. A spy is a variation of a stub, but instead of only setting the expectation, a spy records the method calls made to the collaborator. A spy can act as an indirect output of the unit under test and can also act as an audit log.

Getting started with mock objects

A mock object is a combination of a spy and a stub. It acts as an indirect output for a code under test, such as a spy, and can also stub methods to return values or throw exceptions, like a stub. A mock object fails a test if an expected method is not invoked or if the parameters of the method don't match.

The Mockito framework provides an API for mocking objects. It uses proxy objects to verify the invocation and stub calls.

A fake object is a test double with real logic (unlike stubs) and is much more simplified or cheaper in some way. We do not mock or stub a unit that we test; rather, the external dependencies of the unit are mocked or stubbed so that the output of the dependent objects can be controlled or observed from the tests. The fake object replaces the functionality of the real code that we want to test. Fakes are also dependencies, and don't mock via subclassing (which is generally always a bad idea; use composition instead). Fakes aren't just stubbed return values; they use some real logic.

A classic example is to use a database stub that always returns a fixed value from the DB, or a DB fake, which is an entirely in-memory nonpersistent database that's otherwise fully functional.

What does this mean? Why should you test a behavior that is unreal? Fake objects are extensively used in legacy code. The following are the reasons behind using a fake object:

Fake objects are working implementations. Mostly, the fake class extends the original class, but it usually performs hacking, which makes it unsuitable for production.

Note that it took 0.041 seconds to execute four tests. This is interesting because it's something that you wouldn't easily get if you were using a real database.

This chapter covered the concept of automated unit tests, the characteristics of a good unit test, and explored tests doubles. It provided the examples of dummy objects, fake objects, stubs, mock objects, and spies.

By now, you will be able to identify the different test doubles and write unit tests using test doubles.

The next chapter, Socializing with Mockito, will focus on getting the reader quickly started with the Mockito framework. 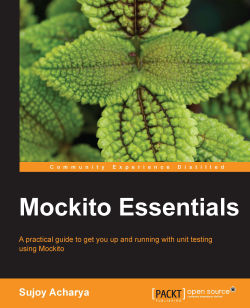