In this course, those who are just getting started as system and network administrators will learn how to create a plan effectively and use that plan to install and configure Windows Server 2019.

The instructor, Prof. K, will explain how to identify and acquire the hardware - virtual or dedicated - that you will need for your new server. He’ll then show you how to select the right edition of Windows Server and install the core operating system. Later, you’ll learn how to use the legacy admin tools as well as Windows PowerShell to effectively configure network addressing, storage, features, and roles, so that your server meets your organization's needs.

By the end of this course, you’ll be well-versed with Microsoft Windows Server 2019 administration and be able to apply your skills in the real world.

All code files and supporting files for this course are available on GitHub at https://github.com/PacktPublishing/Microsoft-Windows-Server-2019---Hands-on-Training-Part-II 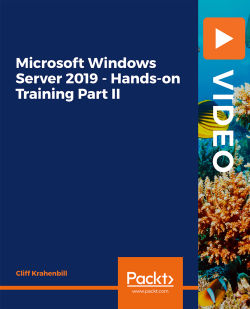