All of the data entered into a CRM means nothing if it is unable to report the important information to our managers and executives in such a way that they can easily and quickly get the results they need. A better reporting system would enable them to make the necessary improvements to the processes that any business needs in a dynamic business world.For users and developers wishing to take advantage of using the report capabilities of Dynamics CRM, this is the book for you.

Microsoft Dynamics CRM 2011 Reporting is a practical and excellent reference guide that provides you with a number of different options you can use to create and empower the Reporting capabilities of Dynamics CRM. This will give you a good grounding in using the reports in your Dynamics CRM 2011 implementations.

This book looks at all the different options we can use to create reports in Dynamics CRM 2011, starting with SQL Reporting Services and custom reports, created in either CRM Report Wizard, SQL Report Builder, or Visual Studio. It will also show other options we can use such as dashboards, charts, and different ways to optimize and automate reports.We will also learn how to build our own reports either using the different wizards for basic reports or using Visual Studio for more complex reports. We will explore the options mobile CRM users have who want to run and see reports on these mobile devices.

Microsoft Dynamics CRM 2011 makes extensive use of reporting, which we will be covering through this entire book. Reporting is a very important piece of any system that is heavily used by managers or upper management roles, such as the CEO and COO, of any enterprise. In this chapter we will cover:

Microsoft Dynamics CRM 2011 allows different types of reports; not only can the SQL Reporting Services reports be used, but other custom reports, such as Crystal Reports, ASP.NET, or Silverlight reports can also be integrated.

Dynamics CRM can manage the following types of reports:

The RDL files can be created in either of the following two ways:

Dynamics CRM 2011 comes with 54 predefined reports out of the box; 25 of them are main reports and 29 are subreports. If for some reason you don't see any report as shown in the following screenshot, it means Dynamics CRM 2011 Reporting Extensions were not installed. This is something that can only happen for on-premise environments; if you are working with CRM Online, you don't need to be worried about any report-extension-deployment tasks. 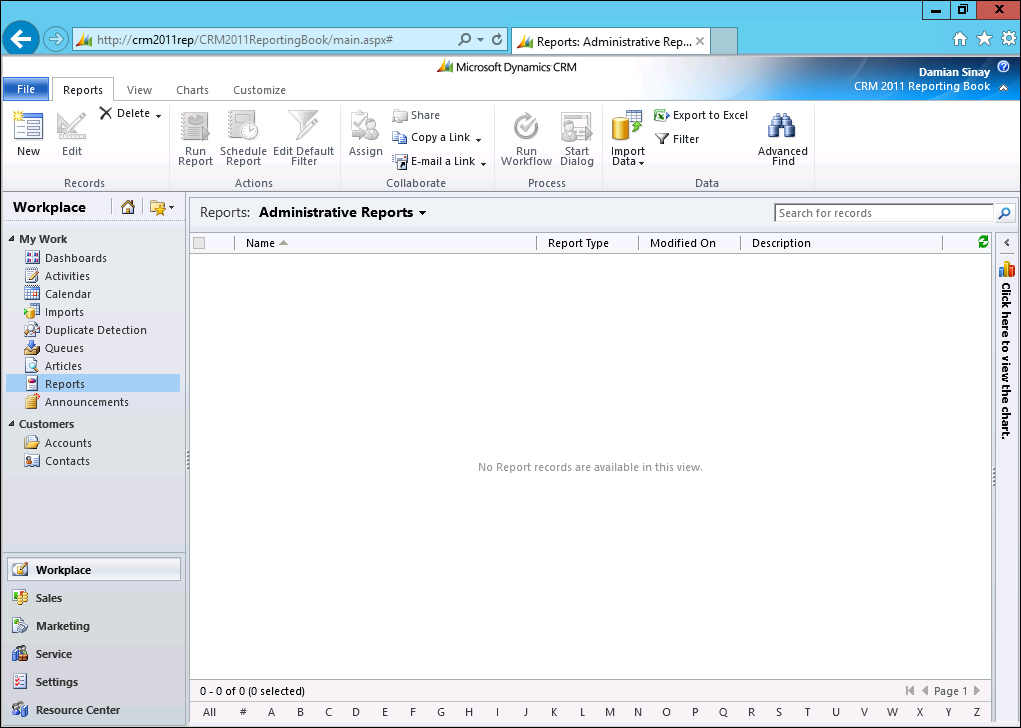 Reports in Dynamics CRM have the following settings or categories that you can access by clicking on the Edit button of each report, as shown in the following screenshot: 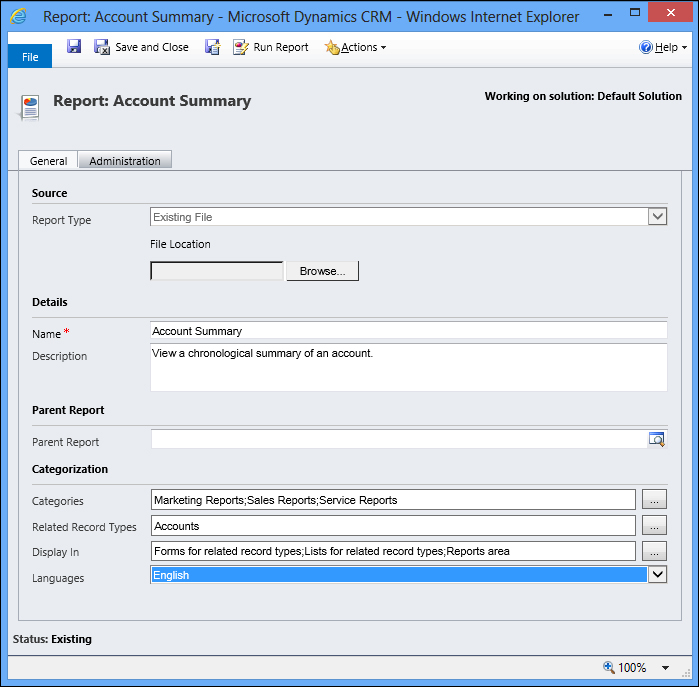 In the Report: Account Summary window you will see two tabs, General and Administration.

The Administration tab will show the name of the owner of the report, when the report was created or updated and who did it, and whether it is viewable to the user or the entire organization.

In the General tab, you will see the name of the report and the description. If it is a subreport, we will see the parent report displayed. Lastly, in the Categorization section, you can see the following settings:

We will study each of these settings in detail.

By default, there are four categories created out of the box in every CRM organization:

You can change, add, or remove these categories by navigating to Settings | Administration | System Settings | Reporting as shown in the following screenshot: 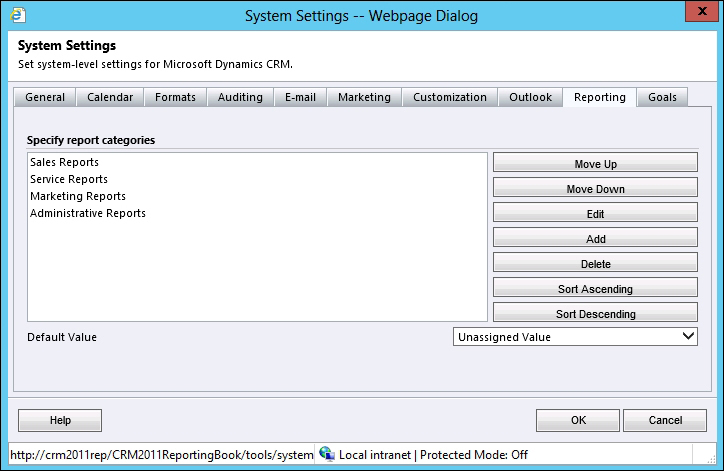 These report categories are used so that you can filter reports by each category when the predefined views are available in the main Reports interface, as shown in the following screenshot: 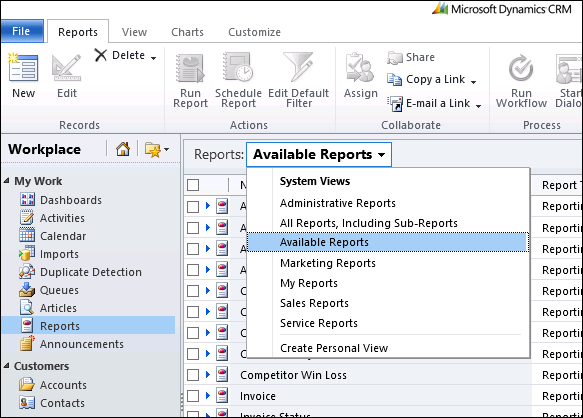 Notice that if you add a new category, you will also have to create the view as it won't be created automatically.

The Related Record Types option allows you to select what entities you want the report to be displayed under. 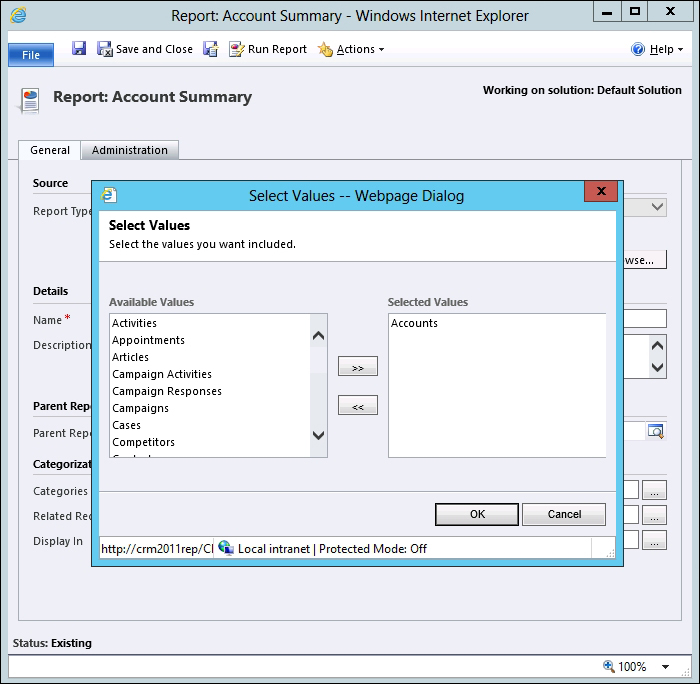 The reports will be listed under the Run Report button that is on the Ribbon. There are two locations where the report will be listed on the entities you selected: the home page grid and the form.

The home page grid is where you see all the records of an entity (depending on the view you selected) as shown in the following screenshot:

Almost every entity in Dynamics CRM has a Run Report button. As you can see, there are some reports that can run on the selected records and there are others that only run on all records. We will see how to configure this in detail when we go deeper into report development with Visual Studio in Chapter 5, Creating Contextual Reports.

The form is the second place where the Run Report button is located and it is visible on the form record that you will see when you open a record; the report will only affect that record.

As we saw in the Related Record Types option, we can decide here where we want to show our report. The options are:

The first option will make the report available on the Run Report button, which is on the form ribbon of an entity record as we have seen earlier.

The lists for the Related Record Types option appears on the home page grid ribbon button.

The Reports area refers to the main reporting interface that is in the Workplace.

This last option of the Categorization section allows us to specify the language of the report. We have the option of selecting all the languages on the list if you want your single report to be displayed in any of these languages. This is helpful if we have the different language packs installed on the CRM Server and the organization has people from different countries who understand different languages. By default all the reports are based on the local language.

This option might not be visible on your installation if you don't have any other language installed on the system.

The first version of reporting services was released as a separate download for SQL 2000. It was in the SQL 2005 version that it was integrated in the SQL Server installation media and became an optional feature of the SQL Server setup.

I remember that when I first installed SQL Reporting Services 2000, the setup was very complicated and required touching some XML files manually. It was in the 2005 version that it included a very nice application called Reporting Services Configuration Manager to help set up and deploy, which has been improving with every version to make this task much easier.

The 2000 and 2005 versions required Internet Information Services (IIS) to be installed on the server to be used by the report manager and report web services. However, the 2008 and 2012 versions come with their own HTTP server and don't make use of the IIS.

There is an important difference between the versions of SQL Server and Visual Studio. Basically, the last version of SQL 2012 is one version behind Visual Studio as currently there is no support for the Report Server Project Templates in Visual Studio 2012. The following table shows this discrepancy:

As we can see in the http://support.microsoft.com/default.aspx?kbid=2791312 link, there is upcoming support for Windows 2012 with the Update Rollup 13, which will be available on the Windows Update.

In this book, I have decided to use the latest Microsoft versions, Windows Server 2012 and SQL Server 2012, to take the benefits of the latest features and improvements. I will mention in this book whenever a specific feature is different from the previous versions, as some implementations might still use the 2008 R2 versions.

At the time of writing this book, CRM Online is using SQL Server 2012.

Some of the benefits of using SQL Server 2012 with Dynamics CRM 2011 are as follows:

There is also another version of SQL Reporting Services that uses the same concept but is hosted in the cloud of Windows Azure; however, this version can't be used with Dynamics CRM directly.

Regardless of the edition, SQL Reporting Services has four main components:

There are two databases that are used by the SQL Reporting Services—ReportServer and ReportServerTempDB. All the reports and configurations are stored in the first database, and the second one is used to store temporary data and improve the service performance by caching the user sessions. Notice that these databases' names are set by default and a Database administrator (DBA) might change the names using the Reporting Services Configuration Manager.

The Report Manager is the web-user interface in which a user can see, create, and run reports by usually going to a URL such as http://<servername>/Reports. From this interface, the administrator can also give and assign permissions to the reports as well as configure and run the reports directly.

The Report Server Web service is the web service end point where a developer can integrate with other custom applications. Usually, by going to a URL such as http://servername/ReportServer, a developer can create another user interface to do everything the Report Manager website can do, but with a custom interface or application such as a Windows or WPF app. This is the URL that Visual Studio and the Report Builder use to connect and interact with the reporting services to run and deploy reports. This web service is very useful if you want to automate some of the export report features, such as to automate the generation of a PDF document by executing a report. An example of one of the end points exposed can be found at http://<servername>/ReportServer/ReportService2010.asmx; there are other ASMX files for compatibility with previous versions, such as ReportService2006.asmx and ReportService2005.asmx.

To install the Reporting Services extensions, follow the given steps:

It is very important that we also validate this page from another computer that is neither the CRM Server nor the SQL Server, to be sure that the reports work properly for the users. Issues in the configurations would make the reports work well only on the server but not on the user machines. In Chapter 9, Failure Recovery and Best Practices, we review some of the common issues and solutions related to the reporting services' authentication issues.

After installing the Reporting Services Extensions, it is also recommended to install the latest rollup updates (service packs) to match the same rollup update as the CRM Server. At the time of writing, the latest rollup update for Dynamics CRM 2011 was number 13 and it can be downloaded using either the Windows Update option or by going to http://www.microsoft.com/en-us/download/details.aspx?id=37133 and downloading the CRM2011-Srs-KB2791312-ENU-amd64.exe file.

To check what rollup update version you have installed and/or see all the different rollup updates that are available, you can refer to this blog article:

The Report Authoring Extension component is essential if you are planning to develop SQL Reporting Service reports with Visual Studio 2008; it will add the necessary FetchXML data connector. As we will see in detail in Chapter 3, Creating Your First Report in CRM, the reports that are generated with the Report Wizard use this connector. So if you want to update any of the reports generated by the Report Wizard, you will need to have these extensions installed on your development machine.

At the time of writing, there is no known version of the developer tools that is compatible with Visual Studio 2012.

To install this extension, you will need to download the Microsoft Dynamics CRM 2011 Report Authoring Extension from the Microsoft downloads website or by going to the following URL:

The following are the steps to install and configure Report Authoring Extension:

You can validate whether the Report Authoring Extensions are well installed by looking at the data source types in Visual Studio 2008, where Microsoft Dynamics CRM Fetch should be listed as an option. 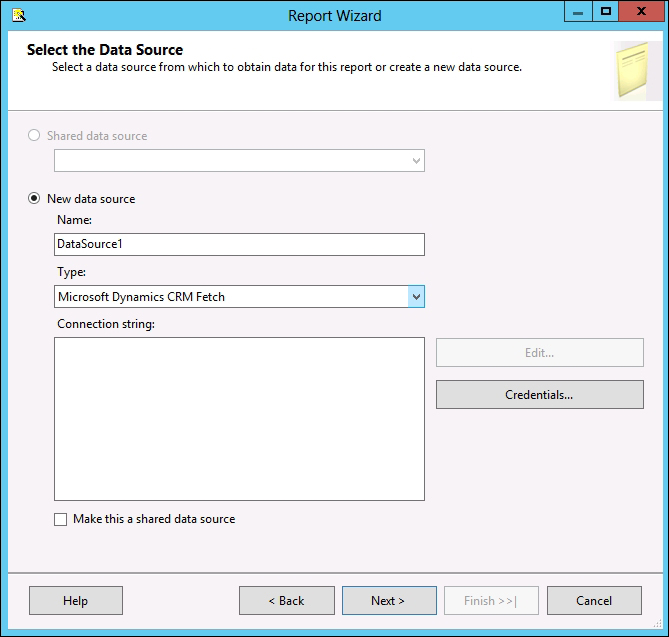 The next chapter will show the entity relationship model of dynamics CRM and review the basic and advanced commands of the SQL language as well as the FetchXML language. 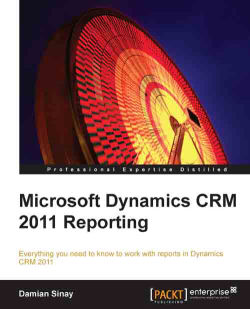