A functional UI is necessary for player interaction. Along with imparting crucial information to the player, the UI is also the mechanism through which the player interacts with the game. Unity's tools give you the opportunity to create complex and attractive UIs to make your game stand out.

This book begins by describing various design considerations for developing UI for different genres and platforms. You’ll learn how to layout UIs, hook up interactions, create movement through animation and particle effects, and optimize UI. It then walks through the technical details of implementing UIs with all three UI systems provided by Unity and both of the Unity input systems.

You'll learn how to create visually engaging heads-up-displays, pause menus, health bars, circular progress bars, animated menus, and more. This book not only teaches how to lay out visual elements but also how to program these features and implement them across multiple games of varying genres. While working through the examples provided, you'll learn how to develop a UI that scales to multiple screen resolutions so your game can be released on multiple platforms with minimal changes.

By the end of this book, you will be confident in developing a game UI with both technical and aesthetic considerations using all the UI elements provided by Unity's UI system. 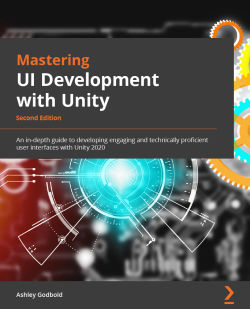