SoapUI is an open-source cross-platform testing application that provides complete test coverage and supports all the standard protocols and technologies. This book includes real-time examples of implementing SoapUI to achieve quality and business assurance.

Starting with the features and functionalities of SoapUI, the book will then focus on functional testing, load testing, and security testing of web services. Furthermore, you will learn how to automate your services and then design data-driven, keyword-driven, and hybrid-driven frameworks in SoapUI. Then the book will show you how to test UIs and services using SoapUI with the help of Selenium. You will also learn how to integrate SoapUI with Jenkins for CI and SoapUI test with QC with backward- and forward-compatibility. The final part of the book will show you how to virtualize a service response in SoapUI using Service Mocking.

You will finish the journey by discovering the best practices for SoapUI test automation and preparing yourself for the online certification of SoapUI.

With the increase in implementation of service-oriented architecture (SOA), architecture across applications leads to various technological and business advantages to the organizations implementing it.

But as it's said; There are two sides to every coin, with SOA architecture came advantages such as the following:

But there are also disadvantages:

In this chapter we will study the following topics:

Well, let's talk about a few of the advantages of SOA architecture:

But the most widely used and open source tool in the SOA testing arena is SoapUI. Following is a comparative analysis of the most famous tools in the Web service testing & test automation arena.

As we can see by the preceding comparison metrics, Ease of use, Learning curve, and Cost play a major role in selection of a tool for any project. So to learn ITKO LISA or SOA Parasoft, there is very limited, or no, material available on the Internet. To get resources trained you need to go to the owners of these tools and pay extra and then pay more if you need the training a second time.

This gives additional advantages to SoapUI and SoapUI Pro to be the first choice for Test Architects and Test Managers for their projects.

Now let's talk about the closely related brothers in this subset; SoapUI & SoapUI Pro are from the same family, Eviware, which is now SmartBear. However, SoapUI Pro has an enriched functionality and GUI which have additional functionalities to help reduce the time for testing, justifying its cost as compared to SoapUI open source.

Here is a quick comparison:

The additional functionality that is available in SoapUI Pro can be achieved by SoapUI using Groovy script. To sum up everything that is given as UI functionality in SoapUI PRO is achievable with little effort in SoapUI which finally makes SoapUI open source the preferred choice for tool pickers.

Before we move onto the architecture let's take a look the capabilities of SoapUI and how can we use it for the benefit of our projects.

SoapUI provides the following testing features to the test team:

Apart from these, SoapUI is also capable of integration with the following:

SoapUI has a comparatively simple architecture as compared to other tools in the SOA testing world.

The following image, shows the architecture of SoapUI at an overview level: 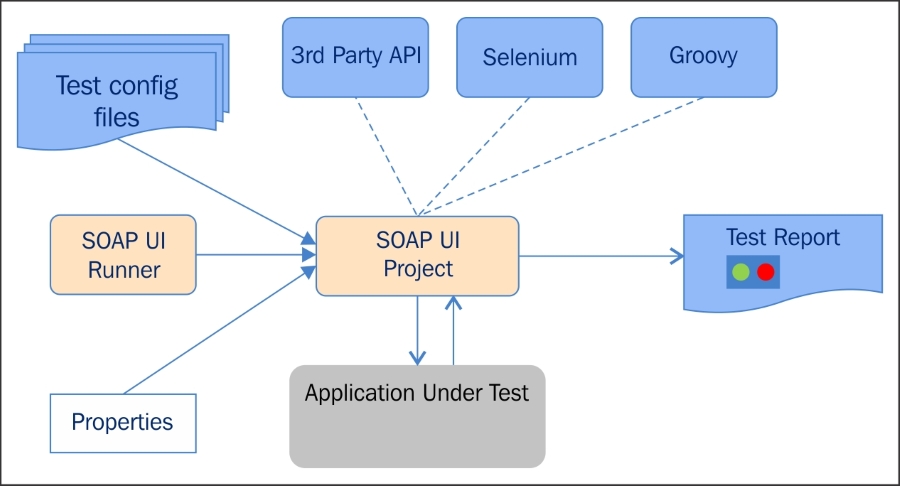 Let's talk about the architecture in detail:

SoapUI Architecture is composed of many key components which help provide the users of SoapUI with advanced functionality like virtualization, XPath, invoking services with JMS endpoints, logging, and debugging.

Approaches to test SOA architecture are usually based on the scope of the project and requirements to test. Let's look at an example. 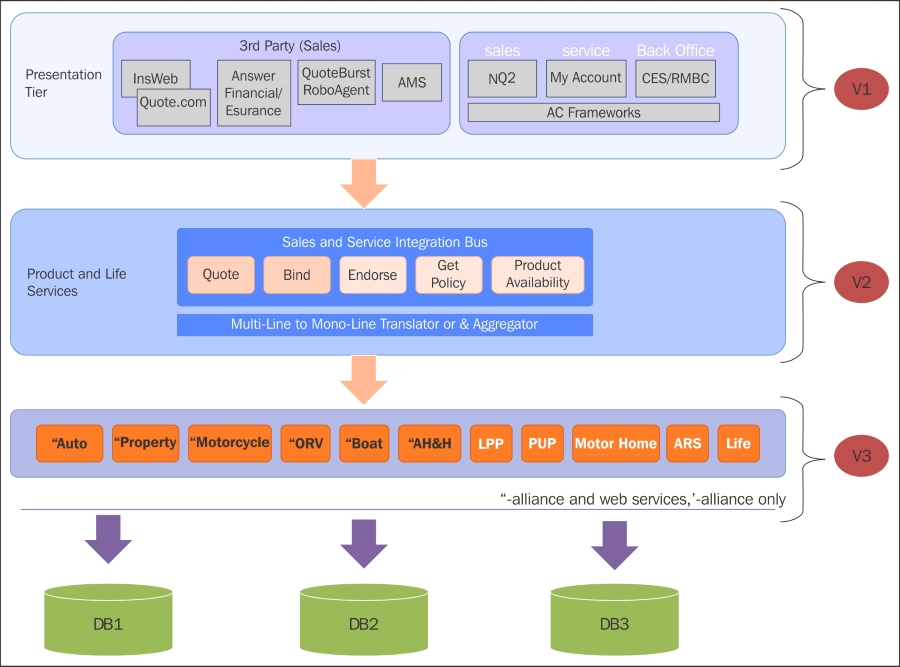 So we have three integration points which makes us understand that we need integration testing also with functional, performance and security testing. So let's sum up the types of testing that are required to test end-to-end Greenfield projects.

A web service may expose single or multiple functionalities via operations and sometimes we need to test a business flow which requires calling multiple services in sequence which is known as orchestration testing in which we validate that a particular business flow meets the requirement.

Let's take an example of how to test a simple web service functionally.

Test case: Validate that Search Customer searches for the customer from the system database using an MSISDN (Telecom Service).

Please note MSISDN is a unique identifier for a user to be searched in the database and is a mandatory parameter.

API to be tested, Search Customer:

By this we validate that searching for the customer using some Search criteria is successful or not, similarly, in order to test this service from a business point of view we need to validate this service with multiple scenarios. Following is a list of a few of them.

Here is how the response looks:

Previous are some examples of Priority1 scenarios that you will require to test this service we will give it a deeper look in the following chapters.

So is it really possible to perform performance testing in SoapUI?

The answer is yes, if you just want to do a very simple test on your service itself, not on the orchestration.

SoapUI does have limitations when it comes to performance testing but it does provide you a functionality to generate load on your web service with different strategies.

So to start with, once you have created your SoapUI project for a service operation, you can just convert the same to a simple load test. Here is how:

We will learn more about performance testing using SoapUI in the following chapters.

API and web services are highly vulnerable to security attacks and we need to be absolutely sure about the security of the exposed web service depending on the architecture of the web service and the nature of its use.

Some of the common attacks types include the following:

SoapUI's security testing functionality provides scans for every attack type and also, if you want to try a custom attack on the service by writing a custom script.

So the scans provided by SoapUI are as follows:

Following are the steps for how we configure a security test in SoapUI:

Now we have learnt how to configure a simple security test in SoapUI, we will learn more about it in detail in the coming chapters.

So now we have been introduced to the key features of SoapUI and by the end of this chapter the readers of this chapter will now be familiar with SOA and SOA Testing. They now will have basic understanding of functional, load, and security testing in SOA using SoapUI. 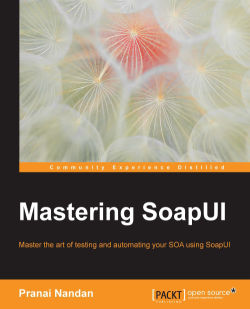