The PrimeFaces framework is one of the most widely used and full-featured JSF component libraries available. The framework includes a large number of custom components that are easy to incorporate into new and existing JSF applications. PrimeFaces also makes it easy to build rich user interfaces via the use of a customizable dialog framework, easy-to-use Ajax, and the ability to work with UI components with markup or Java code.

This course begins by explaining how to incorporate PrimeFaces into your new or existing Java EE project. It uses the NetBeans IDE to build a full-featured Java EE application from the ground up, using PrimeFaces components and framework features. During the initial sections, you will learn how to construct intuitive layouts and input forms to capture data, then present the captured data and edit it with the highly customizable DataTable. You will also learn how to export data into different formats and how to make lists of values to make data entry a breeze.

Next you will learn how to provide useful feedback to users with the PrimeFaces dialog framework and charts.
You’ll also learn how to construct visual menus, as well as contextual menus alike Then you'll dive into the PrimeFaces Ajax framework that allows data to seamlessly flow between the client and server.
In the end you'll learn how to take your application anywhere using PrimeFaces mobile and PrimeFaces Push for notifications. And last but not least, the PrimeFaces Extensions project and its benefits.

This video course is a step-by-step tutorial on developing a JavaEE application named PrimeAutoSales by taking a high level approach to the different features and components that PrimeFaces has to offer. 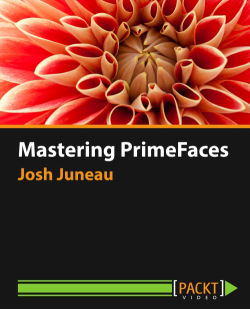 Access this video and the full library for just $5/m. Expire:
Get all the quality content you’ll ever need to stay ahead with a Packt subscription – access over 7,500 online books and videos on everything in tech
Access now