PostgreSQL is an open source database used for handling large datasets (big data) and as a JSON document database. This book highlights the newly introduced features in PostgreSQL 10, and shows you how you can build better PostgreSQL applications, and administer your PostgreSQL database more efficiently. We begin by explaining advanced database design concepts in PostgreSQL 10, along with indexing and query optimization. You will also see how to work with event triggers and perform concurrent transactions and table partitioning, along with exploring SQL and server tuning. We will walk you through implementing advanced administrative tasks such as server maintenance and monitoring, replication, recovery, high availability, and much more. You will understand common and not-so-common troubleshooting problems and how you can overcome them. By the end of this book, you will have an expert-level command of advanced database functionalities and will be able to implement advanced administrative tasks with PostgreSQL 10.

PostgreSQL is one of the world's most advanced open source database systems, and it has many features that are widely used by developers and system administrators alike. Starting with PostgreSQL 10, many new features have been added to PostgreSQL, which contribute greatly to the success of this exceptional open source product. In this book, many of these cool features will be covered and discussed in great detail.

In this chapter, you will be introduced to PostgreSQL and its cool new features available in PostgreSQL 10.0 and beyond. All relevant new functionalities will be covered in detail. Given the sheer number of changes made to the code and given the size of the PostgreSQL project, this list of features is of course by far not complete, so I tried to focus on the most important aspects relevant to most people.

The features outlined in this chapter will be split into the following categories:

PostgreSQL 10.0 has been released in late 2017 and is the first version that follows the new numbering scheme introduced by the PostgreSQL community. From now on, the way major releases are done will change and therefore, the next major version after PostgreSQL 10.0 will not be 10.1 but PostgreSQL 11. Versions 10.1 and 10.2 are merely service releases and will only contain bug fixes.

PostgreSQL 10.0 has many new features that can help the administrator reduce work and make systems more robust.

One of these features that makes life easier for administrators is related to additional information in pg_stat_activity.

The following listing shows the content ofÂ  pg_stat_activityÂ on an idle database instance:

What you see here is that every server process is listed. It will allow you to gain some insights into what is happening the server.

Most people use passwords to connect to the database and manage security. Traditionally, people utilized md5. However, md5 is not safe anymore and therefore new authentication methods are needed. Starting with version 10.0, PostgreSQL supports SCRAM-SHA-256, which is far safer than the previous authentication method.

The old way of doing it is still supported. However, it is strongly recommended to move to SCRAM-SHA-256 in favor of md5.

Since version 8.0, PostgreSQL has supported binary replication (also often referred to as WAL-shipping). The ability to distribute transaction log ( WAL) has been improved steadily over the years.

To publish data, the new CREATE PUBLICATION command has been introduced:

Once the data has been published, remote servers can subscribe to these changes and receive information about what has happened to those published data sets:

CREATE SUBSCRIPTION is used on the slave side to attach to these changes. The beauty of the concept is that a server can publish one set of tables while subscribing to some other tables at the same timeâ€”there is no such thing as always master or always slave anymore. Logical replication allows you to flexibly distribute data.

PostgreSQL has offered support to synchronous replication for quite some time now. Traditionally, only one server could act as a synchronous standby. This has changed. In PostgreSQL 10.0, the community has introduced quorum COMMITs. The idea is actually quite simple. Suppose you want five out of seven servers to confirm a transaction before the master returns a COMMIT. This is exactly what a quorum COMMIT does. It gives the developers and administrators a chance to define what COMMIT does in a more fine-grained way.

To configure quorum COMMITs, the syntax ofÂ  synchronous_standby_names has been extended. Here are two simple examples:

As of now, partitioning is able to:

However, as stated earlier, there are still a couple of missing features that have not been addressed yet. Here are some of the more important things:

The roadmap for PostgreSQL 11.0 already suggests that many of these things might be supported in the next release.

Making use of CREATE STATISTICS

CREATE STATISTICS is definitely one of my personal favorite features of PostgreSQL 10.0 because it allows consultants to help customers in many real-world situations. So, what is it all about? When you run SQL, the optimizer has to come up with clever decisions to speed up your queries. However, to do so, it has to rely heavily on estimates to figure out how much data a certain clause or a certain operation returns. Before version 10.0, PostgreSQL only had information about individual columns. Let's look at an example:

In version 9.6, PostgreSQL checks which fraction of the table matches Ford and which fraction matches Mini Clubman. Then, it would try to guess how many rows match both criteria. Remember, PostgreSQL 9.6 only has information about each columnâ€”it does not know that these columns are actually related. Therefore, it will simply multiply the odds of finding Ford with the odds of finding Mini Clubman and use this number. However, Ford does not produce aÂ Mini Clubman instanceâ€”only BMW does. Therefore, the estimate is wrong. The same cross column correlation problem can happen in other cases too. The number of rows returned by a join might not be clear and the number of groups returned by a GROUP BY clause might be an issue.

The number of children born to people of a certain age will definitely depend on their age. The likelihood that some 30 year old women will have children is pretty high and therefore there will be a count. However, if you happen to be 98, you might not be so lucky and it is pretty unrealistic to have a baby, especially if you are a man (men tend to not give birth to children).

CREATE STATISTICS will give the optimizer a chance to gain deeper insights into what is going on by storing multivariate statistics. The idea is to help the optimizer handle functional dependencies.

PostgreSQL 9.6 was the first version supporting parallel queries in their most basic form. Of course, not all parts of the server are fully parallel yet. Therefore, it is an ongoing effort to speed up even more operations than before. PostgreSQL 10.0 is a major step towards even more parallelism as a lot more operations can now benefit from multi-core systems.

Indexes are a key area of improvement and will benefit greatly from additional features introduced into PostgreSQL 10.0. There is now full support for parallel b-tree scans as well as for bitmap scans. For now, only b-tree indexes can benefit from parallelism but this will most likely change in future releases too, to ensure that all types of indexes can enjoy an even better performance.

When a PostgreSQL database is created, the administrator can choose the encoding, which should be used to store the data. Basically, the configuration decides which characters exist and in which order they are displayed. Here is an exampleâ€”[email protected]. In this case, we will use Unicode characters, which will be displayed in an Austrian sort order (Austrians speak some sort of German). So,Â de_AT will define the order in which the data will be sorted.

To achieve this kind of sorting, PostgreSQL relies heavily on the operating system. The trouble is that if the sort order of characters changes in the operating system for some reason (maybe because of a bug or because of some other reason), PostgreSQL will have troubles with its indexes. A normal b-tree index is basically a sorted list, and if the sort order changes, naturally,Â there isÂ a problem.

The introduction of the ICU library is supposed to fix this problem. ICU offers stronger promises than the operating system and is, therefore, more suitable for long-term storage of data. With the introduction of PostgreSQL 10.0, ICU encodings can be enabled.

In PostgreSQL 10.0, a lot of functionalities have been added that allow people to run even more professional applications even faster and more efficiently. All areas of the database server have been improved and many new professional features have been added. In the future, even more improvements will be made. Of course, the changes listed in this chapter are by far not complete because many small changes were made.

Book is ok. Not detailed enough. 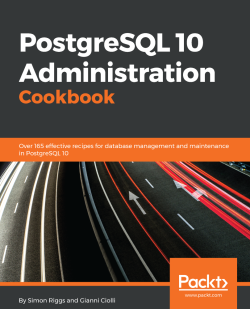 A practical guide to administer, monitor and replicate your PostgreSQL 10 database 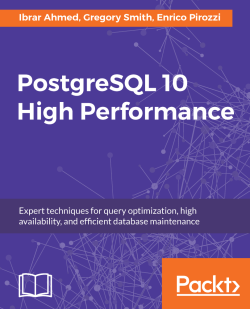 Leverage the power of PostgreSQL 10 to design, administer and maintain a high-performance database solution