The way you choose to interact with your employees is a critical influence on your success as a manager, as well as determining the quality of your employees’ work and the tone of your office. Your superiors will make note of how you handle matters of management, and so will your employees. Many managers, especially when they are new to the role, can find themselves struggling and reacting blindly to situations rather than calmly choosing the correct management style. It’s essential that you be well equipped to handle your role as a manager.

This handy guide takes you through the various elements of management style, and shows you how to decide on the best approach to take in a variety of situations and with different types of employee. Drawing on years of management expertise, it will enable you to bring out the best in your employees.

Mastering Management Styles looks at the various components of management style and shows you how to combine them in the way that best suits each type of situation you’ll face. When should you be consultative with your employees? When should you be directive? How much coaching should you offer them, and how should you do it? How do you balance the interests of your employer with those of your employees? How do you distinguish between different types of employee? All of these topics are covered in this practical instruction manual for managers, providing you with a go-to set of analytical tools and hands-on strategies that will make you a much more effective and successful manager.

People don't always stop to think about the question of the precise role and purpose of a manager. They think it's obvious, so they don't bother to articulate it, or even to think about it much.

Actually, though, if you ask most managers, they'd be unlikely to zero in on the one thing that should in fact be guiding their thinking as managers:

The role of a manager is to maximize the performance of the people who report to him or her, in order best to achieve the objectives of the organization.

Take a close look at the preceding statement, and think about its implications. What does it say about how managers should conduct themselves, and about management style?

Many managers, especially new ones, take the position that they're the boss and that it's up to their employees to adapt themselves to the manager's preferred way of doing things; that managers have their own styles and preferences, and everyone needs to adapt accordingly.

But how likely is that approach to lead to optimal performance on the part of employees? For example, if a certain employee does excellent work by organizing the work on his or her own, does it really make sense for a manager to step in and tell the employee to organize it some other way; the way in which the manager used to do it before becoming a manager? Is this likely to produce the best work of which that employee is capable? Will it motivate that employee and increase loyalty? In a case like this, it makes more sense for the manager to adapt to the employee, rather than the other way around.

Rule # 1 about being a manager: It's not about you!

Understanding the various management styles is crucially important to managerial success because it allows the thoughtful manager to choose the right style for each employee, circumstance, type of work, and environment. If you are to maximize your effectiveness as a manager, you must be able to apply the appropriate managerial approach in each situation.

Your key task is to develop the ability to adapt your style to the nature of the employee and the situation.

There's another reason why style matters: it goes a long way toward determining the atmosphere of your office and the way employees interact and communicate with you. Your style says a lot about how you view your employees and what you expect of them, and will do much to shape their perceptions of you.

The elements of management style

When managing any employee or situation, you should always be thinking of all of these elements.

The most important elements of management style, and the ones that will do the most to define your approach in the eyes of others, are the two axes of:

The amount of guidance you provide your employees is another key element of management style. Guidance comes in three main forms:

Coaching refers to the formal steps you take to develop an employee's skills in certain areas. These could be hard job skills, or soft skills such as communication or interpersonal skills.

Mentoring is a broader process, usually informal but sometimes formalized, whereby a more senior employee helps a less senior employee advance his or her career in various ways.

Support refers to steps you take less formally to help an employee along. These can include dealing with concrete issues, such as addressing obstacles that may have been created by other areas of the company and that make it difficult for your employee to get the work done, and softer issues, such as a lack of confidence on the part of the employee.

The final main element of management style is orientation. This is the extent to which you manage in the interests of the organization as opposed to those of the employee. Although it may sound obvious that you are hired to serve the needs of the organization, dealing with people is never that simple.

This point is especially true in today's world, where highly educated knowledge workers, and young people raised on social media, will not mesh well with a rigid and inflexible managerial style.

Managing on a spectrum

It's also important to understand that the management styles mentioned above are not rigid "either/or" choices. Each one is, in general, a spectrum. For example, when you're looking at the direction/consultation axis, you don't decide which of those two poles you're going to choose; you decide where on a continuum you're going to come down.

You may choose to be highly directive, or highly consultative; but you may also choose to be a bit of both. You can approach a given person or situation from any point on the spectrum.

Like the two axes, orientation is a spectrum; you'll continually be moving back and forth along a continuum between the interests of the employee and those of the organization.

One final point before we start to dig into the meat and potatoes. It's worthwhile to make a distinction between managing work and managing people. Managing work is actually pretty easy; it's mostly a question of being organized and of keeping on top of deadlines. In today's environment, though, you rarely have the luxury of simply managing work; you have to manage people as well. Managers who step into a management role thinking that it's just a question of getting the work done are riding for a fall; you have to be prepared to deal with the people side of things as well.

Incidentally, this is a mistake that people sometimes make when they're hiring: they hire someone who's really good at getting work done, thinking that this is a qualification for management. But the hard part of management is dealing with people. Never forget that. (By the way, sometimes people make the opposite mistake as well: they hire someone with people skills who's no good at the work. Needless to say, that doesn't work either.)

Let's talk about two employees who work in our organization, Dave and Rhonda.

Rhonda is a recent recruit, fresh out of university. She has a liberal arts degree, and she has a bit of work experience from when she was a student. She did three work terms in various types of office, including one that was pretty similar to ours; and during her class terms she worked as a waitress in a restaurant and behind the counter at a coffee bar. She also volunteered in the University library and with disadvantaged children.

Dave is in his early fifties, and is a senior engineer. He has been with our firm for 26 years. Although he is considered highly skilled and competent by both his colleagues and his superiors, he has never expressed any interest in management, and the higher-ups also see him more as an individual contributor than as a manager. Although his interpersonal skills are perfectly satisfactory for doing his job, he doesn't consider himself to be much of a "people person", and he's not hugely interested in the people side of the job, or of anything else for that matter.

As you progress through this book, Dave and Rhonda will appear in various situations and contexts, and you will be asked to think about how you, as their manager, should respond. Although there are no absolutely right answers for this sort of thing, some suggestions as to how you might want to act will be provided at the end of each chapter.

In this chapter, you have:

Now let's take a closer look at the first element of management style, the direction/consultation axis. 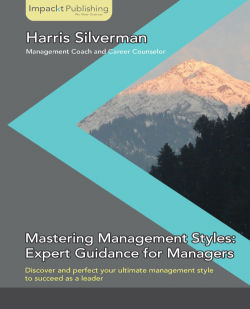