With browsers becoming more and more powerful each day, the jQuery UI library provides tools that can be used to create feature rich and interactive applications without bearing the pain of writing numerous lines of JavaScript.

Mastering jQuery UI will help you explore the depths of the jQuery UI library. Right from the first chapter, you will build your own projects while learning the intricacies of the library. Each chapter explores a new topic and covers some related components. By gaining confidence from the initial chapters you will proceed ahead to create complex applications like the Tabbed News reader utilizing the AJAX and Reddit APIs. As a bonus, you will also learn about the best and most proven practices earned through years of diligent work on the jQuery UI platform.

Each chapter is an independent mini project in itself covering different components from jQuery UI. You won't have to wait long to actually build something functional.

To begin with, we will design a simple quiz application where users have to match country names to their corresponding capital names by dragging a country name over its correct capital. A correct match will result in one point, and drag and drop will be disabled for both the country and its capital.

The display will contain two columns, the first one will have country names and the second one will have the names of the capitals of those countries. Both the columns will be shuffled randomly. Once the user has matched all the names successfully, a modal dialog will appear. Users will also be given the option to reset the quiz. Resetting will restart the game and shuffle the lists again.

Make sure that you download the correct version as per your requirements.

Since we will cover all components throughout the book, download the full version of the library.

You might be aware that Content Delivery Networks (CDN) host many popular libraries. Since the browsers cache JavaScript files, your page will not have to load a JavaScript file again if it is referenced from a CDN and already cached in browser. You can link jQuery and jQuery UI among CDN's many other libraries.

Make sure that you are connected to the Internet if you have referenced the libraries from the CDN in your pages.

Google, Microsoft, and some other companies provide CDN for jQuery, jQuery UI, and other libraries. Here are the links to pages for downloading these libraries:

Setting up the folder structure for the JavaScript and CSS files

We will now set up the folder structure that we will use for all the chapters in this book. The steps are as follows:

Now we are ready to experiment with jQuery UI and create some informative and fun examples. Let's start our journey by creating the quiz application.

In the newly created folder Chapter1, create a file named index.html and another .js file named quiz.js inside the js folder of Chapter1. The quiz.js file will contain all the code that we need to make the quiz functional.

Markup for the quiz page

Open the index.html file for editing using your favorite text editor, and write the following code in it:

In the preceding code, inside the head section, we referenced the jQuery UI .css file. If you have placed the .css file elsewhere, make sure to correct the path accordingly. The path can either be an absolute path or a relative path.

Finally, at the bottom of the page, reference the jQuery, jQuery UI, and quiz.js files.

Make sure that jQuery is included first before jQuery UI, and that any other JavaScript file or custom jQuery code is included or written.

We will also need some CSS styling to make the elements look good. In the head section of the index.html file, write the following code:

In the preceding code, first we defined some basic styles for the body and the container elements. After that, the styles were defined for the ul element and its li items. These styles will display the list items in the form of individual boxes. CSS for the score and reset items follow next and finally some basic styling for the dialog elements.

Our UI part is now complete and we can proceed to make the quiz functional. We will do this in a few steps. First of all, we will display the data on the page in two columns. Then, we will make the country names draggable. Finally, the list items with the capital names will be made droppable so that we can drop a country name inside a capital. We will also have to ensure that a droppable capital name accepts only the correct country name. Finally, the resetting logic will be built.

Displaying data on the page

Open the quiz.js file for editing and write the following code:

On the document ready event we call a function named createQuizLayout which we need to define now.

Here is what the preceding code does:

An important point to note here is that we are giving a data attribute named index to each list item having a value from 1 to 10. Since we have both the countries and capital names in the same order, index will be used to match which country belongs to which capital.

After both arrays are populated, we will shuffle them so that the order of countries and capitals becomes random. For this, we will use a simple shuffle function from the website http://jsfromhell.com/array/shuffle. The shuffle function is defined as follows:

Open your browser and point it to the index.html file of the Chapter1 folder now. You will see a page similar to the one shown in the following screenshot: 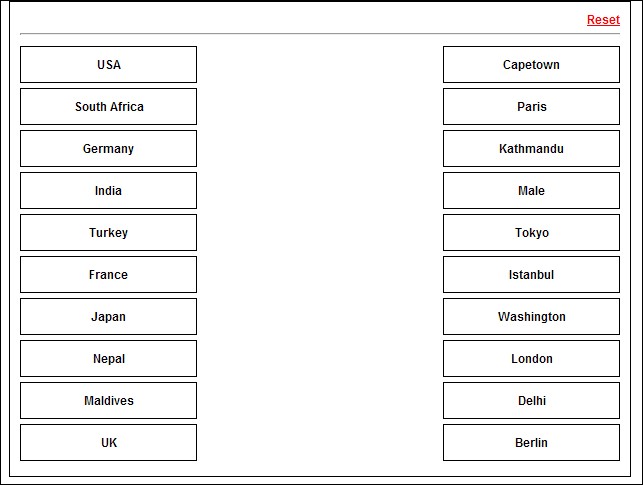 If you reload the page, you will see that the order of countries and capitals changes each time. This is because shuffling creates a new order for items of both lists.

The preceding code calls the draggable method of the jQuery UI library. It is being called upon the li elements of the ul source, which means it will make all the list items draggable inside the source ul. Further, we are also giving the draggable method three options that we need for our application: revert, revertDuration, and cursor. Let's look at these in more detail:

Our draggable elements are ready now, and so it is time to make the capital names droppable and build the logic to match countries to their correct capitals.

In the previous section, we created an initQuiz function where we made our countries draggable. After the draggable code, write the following code to make the capitals droppable: 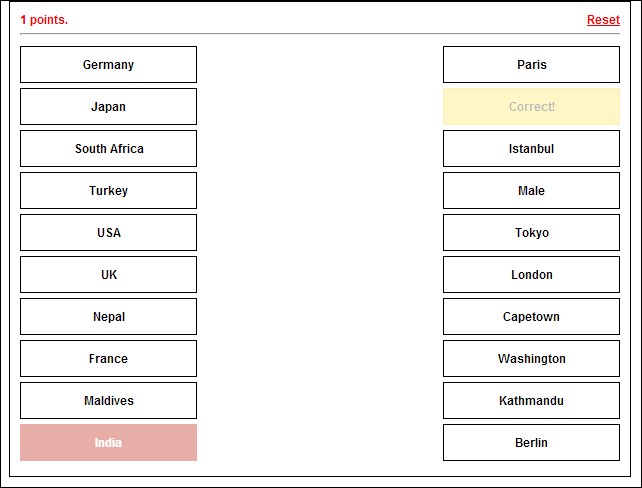 Try the drag and drop for all countries in the left-hand side list. When you have matched all countries correctly, you will see a dialog box and the page will look like the following screenshot: 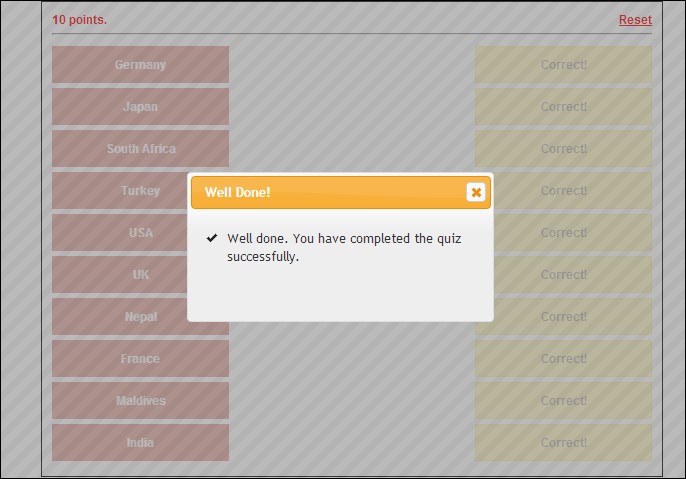 So, a lot is happening in the preceding code. We will look at it step by step.

We defined a variable named totalScore and set it to 0. We also inserted the score inside the HTML element with the id value score. Each time the quiz starts, the score will be reset as well. After this, we call the droppable method of jQuery UI on the list items of ul with the id value target to make them ready to accept the draggable country elements.

We are using the accept option of the jQuery UI draggable method to check for the correct matches of country and capital, and we are using the drop event to change the UI and scoring.

Since we have already defined data attributes for both countries and capitals, we can match those to check if the current draggable-droppable pair is a correct country-capital pair or not. If the indexes match, we return true; otherwise, we return false.

The callback function for the drop event receives two parameters: event and ui. Of these two, we are interested in the ui object. Among other values, it provides us with a reference to the draggable element that was dropped. To refer to the current droppable element where the draggable element is dropped, we have $(this) variable with us. The code is as follows:

In the preceding code, we added the jQuery UI framework's CSS class ui-state-highlight to the current droppable element and then changed that list item's HTML content to Correct! and added the bounce effect to the droppable capital.

The next two lines add CSS classes named correct and ui-state-error to the draggable method and then disable it. The code is as follows:

The correct class will be used to determine how many successful countries have been matched. The class ui-state-error is just for presentation purposes to make the successfully matched country name highlighted. Using the draggable disable method, we disable the specific draggable element as well, because it has been matched and we do not want it to be dragged again.

Since the drop event receives only the accepted draggable elements, we can safely increase the variable totalScore by 1 and insert the new value back to the DOM in the element score. This shows us the latest score each time a new match is made.

Finally, we count the number of list items in the countries' column that have the CSS class named correct associated with them. Since we have 10 elements, if all the 10 list items have the CSS class correct attached to them, it means the quiz is complete. We then show a jQuery UI dialog component that we kept hidden in our HTML page initially.

If you were wondering why we created the functions createQuizLayout and initQuiz when we wrote the code without them, the answer is that we need to call them again. It is better not to repeat yourself. We can now reset the quiz without having to reload the page.

We have already created an element with id reset. Visit the $(document).ready() callback again and write the following code after those two function calls. The section will now look like this:

We have an event handler registered at the click of the reset button. It is using the destroy method of jQuery UI on the draggable and droppable elements. The destroy method will remove the complete draggable and droppable functionality from respective elements. It will also remove any special CSS classes that jQuery UI might have applied earlier.

After bringing the page to its initial state, we call the createQuizLayout and initQuiz functions again, which will initialize our quiz once more.

This was a basic application to begin with. There can be many more enhancements to this quiz to make it more feature rich. You are encouraged to add more features to it and refactor the code as well.

Here are some ideas that you can start with: 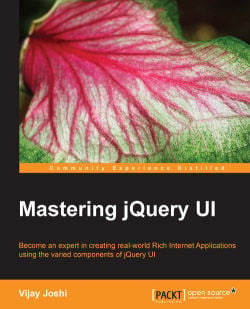