Apache Storm is a real-time Big Data processing framework that processes large amounts of data reliably, guaranteeing that every message will be processed. Storm allows you to scale your data as it grows, making it an excellent platform to solve your big data problems. This extensive guide will help you understand right from the basics to the advanced topics of Storm.

The book begins with a detailed introduction to real-time processing and where Storm fits in to solve these problems. You’ll get an understanding of deploying Storm on clusters by writing a basic Storm Hello World example. Next we’ll introduce you to Trident and you’ll get a clear understanding of how you can develop and deploy a trident topology. We cover topics such as monitoring, Storm Parallelism, scheduler and log processing, in a very easy to understand manner. You will also learn how to integrate Storm with other well-known Big Data technologies such as HBase, Redis, Kafka, and Hadoop to realize the full potential of Storm.

With real-world examples and clear explanations, this book will ensure you will have a thorough mastery of Apache Storm. You will be able to use this knowledge to develop efficient, distributed real-time applications to cater to your business needs.

With the exponential growth in the amount of data being generated and advanced data-capturing capabilities, enterprises are facing the challenge of making sense out of this mountain of raw data. On the batch processing front, Hadoop has emerged as the go-to framework to deal with big data. Until recently, there has been a void when one looks for frameworks to build real-time stream processing applications. Such applications have become an integral part of a lot of businesses as they enable them to respond swiftly to events and adapt to changing situations. Examples of this are monitoring social media to analyze public response to any new product that you launch and predicting the outcome of an election based on the sentiments of election-related posts.

Organizations are collecting a large volume of data from external sources and want to evaluate/process the data in real time to get market trends, detect fraud, identify user behavior, and so on. The need for real-time processing is increasing day by day and we require a real-time system/platform that should support the following features:

Apache Storm has emerged as the platform of choice for industry leaders to develop distributed, real-time, data processing platforms. It provides a set of primitives that can be used to develop applications that can process a very large amount of data in real time in a highly scalable manner.

Storm is to real-time processing what Hadoop is to batch processing. It is open source software, and managed by Apache Software Foundation. It has been deployed to meet real-time processing needs by companies such as Twitter, Yahoo!, and Flipboard. Storm was first developed by Nathan Marz at BackType, a company that provided social search applications. Later, BackType was acquired by Twitter, and it is a critical part of their infrastructure. Storm can be used for the following use cases:

The following are some of the features of Storm that make it a perfect solution to process streams of data in real time:

A Storm cluster follows a master-slave model where the master and slave processes are coordinated through ZooKeeper. The following are the components of a Storm cluster.

The Nimbus node is the master in a Storm cluster. It is responsible for distributing the application code across various worker nodes, assigning tasks to different machines, monitoring tasks for any failures, and restarting them as and when required.

Nimbus is stateless and stores all of its data in ZooKeeper. There is a single Nimbus node in a Storm cluster. If the active node goes down, then the passive node will become an Active node. It is designed to be fail-fast, so when the active Nimbus dies, the passive node will become an active node, or the down node can be restarted without having any effect on the tasks already running on the worker nodes. This is unlike Hadoop, where if the JobTracker dies, all the running jobs are left in an inconsistent state and need to be executed again. The Storm workers can work smoothly even if all the Nimbus nodes go down but the user can't submit any new jobs into the cluster or the cluster will not be able to reassign the failed workers to another node.

In any distributed application, various processes need to coordinate with each other and share some configuration information. ZooKeeper is an application that provides all these services in a reliable manner. As a distributed application, Storm also uses a ZooKeeper cluster to coordinate various processes. All of the states associated with the cluster and the various tasks submitted to Storm are stored in ZooKeeper. Nimbus and supervisor nodes do not communicate directly with each other, but through ZooKeeper. As all data is stored in ZooKeeper, both Nimbus and the supervisor daemons can be killed abruptly without adversely affecting the cluster.

The following is an architecture diagram of a Storm cluster: 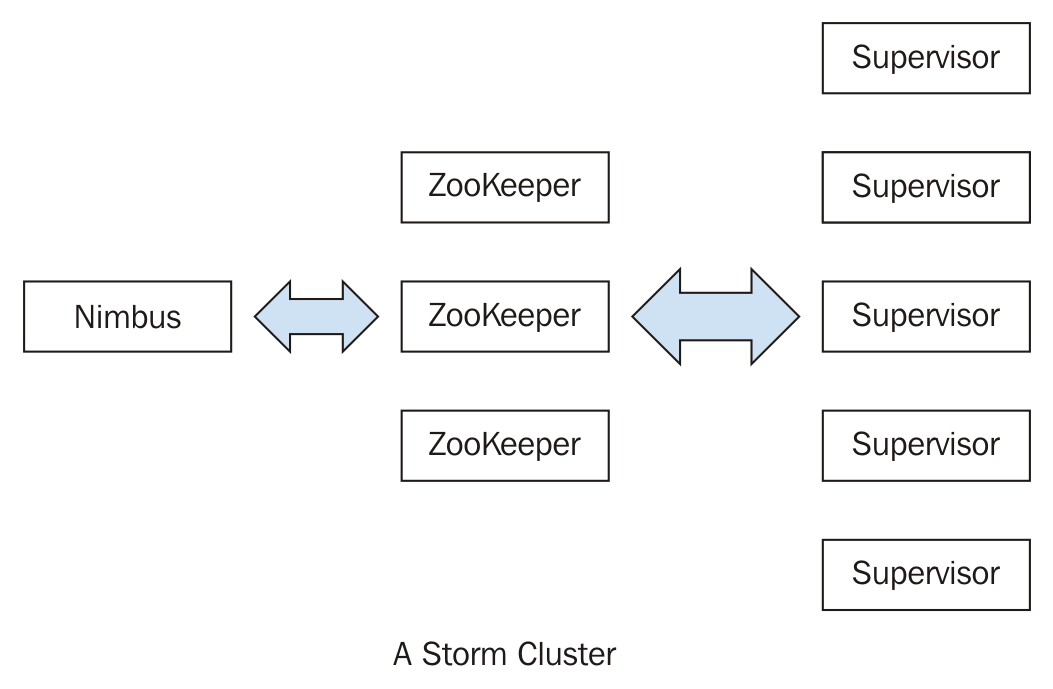 The basic unit of data that can be processed by a Storm application is called a tuple. Each tuple consists of a predefined list of fields. The value of each field can be a byte, char, integer, long, float, double, Boolean, or byte array. Storm also provides an API to define your own datatypes, which can be serialized as fields in a tuple.

A tuple is dynamically typed, that is, you just need to define the names of the fields in a tuple and not their datatype. The choice of dynamic typing helps to simplify the API and makes it easy to use. Also, since a processing unit in Storm can process multiple types of tuples, it's not practical to declare field types.

Each of the fields in a tuple can be accessed by its name, getValueByField(String), or its positional index, getValue(int), in the tuple. Tuples also provide convenient methods such as getIntegerByField(String) that save you from typecasting the objects. For example, if you have a Fraction (numerator, denominator) tuple, representing fractional numbers, then you can get the value of the numerator by either using getIntegerByField("numerator") or getInteger(0).

You can see the full set of operations supported by org.apache.storm.tuple.Tuple in the Java doc that is located at https://storm.apache.org/releases/1.0.2/javadocs/org/apache/storm/tuple/Tuple.html.

Definition of a Storm topology

In Storm terminology, a topology is an abstraction that defines the graph of the computation. You create a Storm topology and deploy it on a Storm cluster to process data. A topology can be represented by a direct acyclic graph, where each node does some kind of processing and forwards it to the next node(s) in the flow. The following diagram is a sample Storm topology: 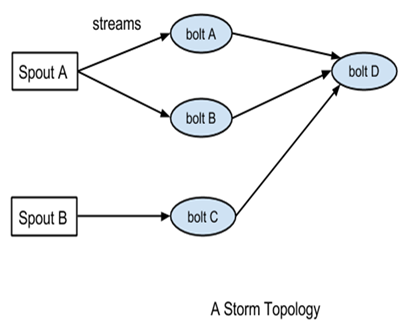 The following are the components of a Storm topology:

The org.apache.storm.spout.ISpout interface is the interface used to define spouts. If you are writing your topology in Java, then you should use org.apache.storm.topology.IRichSpout as it declares methods to use with the TopologyBuilder API. Whenever a spout emits a tuple, Storm tracks all the tuples generated while processing this tuple, and when the execution of all the tuples in the graph of this source tuple is complete, it will send an acknowledgement back to the spout. This tracking happens only if a message ID was provided when emitting the tuple. If null was used as the message ID, this tracking will not happen.

A tuple processing timeout can also be defined for a topology, and if a tuple is not processed within the specified timeout, a fail message will be sent back to the spout. Again, this will happen only if you define a message ID. A small performance gain can be extracted out of Storm at the risk of some data loss by disabling the message acknowledgements, which can be done by skipping the message ID while emitting tuples.

The important methods of spout are:

If a spout wants to emit data to more than one stream, it can declare multiple streams using the declareStream method and specify a stream ID while emitting the tuple. If there are no more tuples to emit at the moment, this method will not be blocked. Also, if this method does not emit a tuple, then Storm will wait for 1 millisecond before calling it again. This waiting time can be configured using the topology.sleep.spout.wait.strategy.time.ms setting.

Another point to note while writing your spout is that none of the methods should be blocking, as Storm calls all the methods in the same thread. Every spout has an internal buffer to keep track of the status of the tuples emitted so far. The spout will keep the tuples in this buffer until they are either acknowledged or failed, calling the ack or fail method, respectively. Storm will call the nextTuple method only when this buffer is not full.

The important methods of a bolt are:

You are not required to process the tuple as soon as this method is called, and the tuples can be held until required. For example, while joining two streams, when a tuple arrives you can hold it until its counterpart also comes, and then you can emit the joined tuple.

The metadata associated with the tuple can be retrieved by the various methods defined in the Tuple interface. If a message ID is associated with a tuple, the execute method must publish an ack or fail event using OutputCollector for the bolt, or else Storm will not know whether the tuple was processed successfully. The org.apache.storm.topology.IBasicBolt interface is a convenient interface that sends an acknowledgement automatically after the completion of the execute method. If a fail event is to be sent, this method should throw org.apache.storm.topology.FailedException.

Operation modes indicate how the topology is deployed in Storm. Storm supports two types of operation modes to execute the Storm topology:

In the next chapter, we are going to cover both local and remote mode in more detail, along with a sample example.

Similarly, spouts and bolts can be defined in any language. Non-JVM spouts and bolts communicate with Storm over a JSON-based protocol over stdin/stdout. Adapters that implement this protocol exist for Ruby, Python, JavaScript, and Perl. You can refer to https://github.com/apache/storm/tree/master/storm-multilang to find out about the implementation of these adapters.

Storm-starter has an example topology, https://github.com/apache/storm/tree/master/examples/storm-starter/multilang/resources, which implements one of the bolts in Python.

In this chapter, we introduced you to the basics of Storm and the various components that make up a Storm cluster. We saw a definition of different deployment/operation modes in which a Storm cluster can operate.

In the next chapter, we will set up a single and three-node Storm cluster and see how we can deploy the topology on a Storm cluster. We will also see different types of stream groupings supported by Storm and the guaranteed message semantic provided by Storm.

Read more Unlock this book with a 7 day free trial.
About the Author
Paypal said that payment was successful amount was deducted from my CC, I didn't receive any eBook. It seems like this is a fraud publishing company, please don't purchase any books from this website. 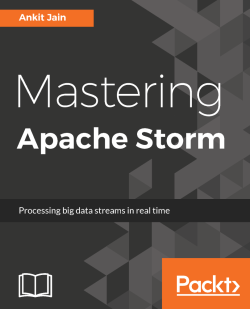