Magento is one of the most exciting, flexible, and customizable e-commerce systems. It offers you an extensive suite of powerful tools for creating and managing an online store. After years of development, Magento 2 introduces itself with a strong emphasis on modularity, Web API's, automated testing and overall new technology stack platform. The long-awaited Magento 2 release introduces a whole new e-commerce platform to develop online stores. The all new Magento 2 architecture, Web APIs, and a host of other features are equally challenging to master as much as they are exciting to use.

This book will ease the learning curve by offering step-by-step guidance on how to extend the core functionality of your Magento 2 store.

This book is your one-stop guide to build and customize a quality e-commerce website from the latest version of one of the largest, fastest growing, and most popular e-commerce platforms—Magento 2.

We start off with an introduction to the fundamental concepts of Magento to give you a foundation to work from. We then move on to configure the development and basic production environment for Magento. After this, you’ll get to grips with the major concepts and conventions that are new to the Magento 2 platform. We then delve deeper to get to the core of automated deployments, persisting data, creating your own Magento themes, writing data fixture scripts and applying various backend and frontend modifications. As we near the end of the book, you will learn to make API calls and write automated tests. Finally, you will be guided through building a full-blown helpdesk module from scratch.

By the end of this book, you will have learned a wide range of techniques to extend and customize your Magento 2 store to fit the requirements of your business.

Magento is a powerful, highly scalable, and highly customizable e-commerce platform that can be used to build web shops and, if needed, some non-e-commerce sites. It provides a large number of e-commerce features out of the box.

Features such as product inventory, shopping cart, support for numerous payment and shipment methods, promotion rules, content management, multiple currencies, multiple languages, multiple websites, and so on make it a great choice for merchants. On the other hand, developers enjoy the full set of merchant-relevant features plus all the things related to actual development. This chapter will touch upon the topic of robust Web API support, extensible administration interface, modules, theming, embedded testing frameworks, and much more.

In this chapter, a high-level overview of Magento is provided in the following sections:

Different pieces of technology can be glued into various architectures. There are different ways to look at the Magento architecture—from the perspective of a module developer, system integrator, or a merchant, or from some other angle.

From top to bottom, Magento can be divided into four architectural layers, namely presentation, service, domain, and persistence.

The presentation layer is the one that we directly interact with through the browser. It contains layouts, blocks, templates, and even controllers, which process commands to and from the user interface. Client-side technologies such as jQuery, RequireJS, CSS, and LESS are also a part of this layer. Usually, three types of users interact with this layer, namely web users, system administrators, and those making the Web API calls. Since the Web API calls can be made via HTTP in a manner that is the same as how a user uses a browser, there's a thin line between the two. While web users and Web API calls consume the presentation layer as it is, the system administrators have the power to change it. This change manifests in the form of setting the active theme and changing the content of the CMS (short for content management system) pages, blocks, and the products themselves.

When the components of a presentation layer are being interacted with, they usually make calls to the underlying service layer.

The service layer is the bridge between the presentation and domain layer. It contains the service contracts, which define the implementation behavior. A service contract is basically a fancy name for a PHP interface. This layer is where we can find the REST/SOAP APIs. Most user interaction on the storefront is routed through the service layer. Similarly, the external applications that make the REST/SOAP API calls also interact with this layer.

When the components of a service layer are being interacted with, they usually make calls to the underlying domain layer.

The domain layer is really the business logic of Magento. This layer is all about generic data objects and models that compose the business logic. The domain layer models themselves do not contribute to data persistence, but they do contain a reference to a resource model that is used to retrieve and persist the data to a MySQL database. A domain layer code from one module can interact with a domain module code from another module via the use of event observers, plugins, and the di.xml definitions. We will look into the details of these later on in other chapters. Given the power of plugins and di.xml, its important to note that this interaction is best established using service contracts (the PHP interface).

When the components of the domain layer are being interacted with, they usually make calls to the underlying persistence layer.

The app/etc/di.xml file is one of the most important files that we might often look into during development. It contains various class mappings or preferences for individual interfaces.

The var/magento/language-* directories is where the registered languages reside. Though each module can declare its own translations under app/code/{VendorName}/{ModuleName}/i18n/, Magento will eventually fall back to its own individual module named i18n in case translations are not found in the custom module or within the theme directory.

The bin directory is where we can find the magento file. The magento file is a script that is intended to be run from a console. Once triggered via the php bin/magento command, it runs an instance of the Magento\Framework\Console\Cli application, presenting us with quite a number of console options. We can use the magento script to enable/disable cache, enable/disable modules, run an indexer, and do many other things.

The dev directory is where we can find the Magento test scripts. We will have a look at more of those in later chapters.

The pub directory is where the publicly exposed files are located. This is the directory that we should set as root when setting up Apache or Nginx. The pub/index.php file is what gets triggered when the storefront is opened in a browser.

The var directory is where the dynamically generated group type of files such as cache, log, and a few others get created in. We should be able to delete the content of this folder at any time and have Magento automatically recreate it.

The vendor directory is where most of the code is located. This is where we can find various third-party vendor code, Magento modules, themes, and language packs. Looking further into the vendor directory, you will see the following structure:

Within the vendor directory, we can find code from various vendors, such as phpunit, phpseclib, monolog, symfony, and so on. Magento itself can be found here. The Magento code is located under vendor/magento directory, listed (partially) as follows:

Magento identifies itself as a highly modular platform. What this means is that there is literally a directory location where modules are placed. Let's take a peak at the individual module structure now. The following structure belongs to one of the simpler core Magento modules—the Contact module that can be found in vendor/magento/module-contact:

Even though the preceding structure is for one of the simpler modules, you can see that it is still quite extensive.

The Block directory is where the view-related block PHP classes are located.

The Controller directory is where the controller-related PHP classes are stored. This is the code that responds to the storefront POST and GET HTTP actions.

The etc directory is where the module configuration files are present. Here, we can see files such as module.xml, di.xml, acl.xml, system.xml, config.xml, email_templates.xml, page_types.xml, routes.xml, and so on. The module.xml file is an actual module declaration file. We will look into the contents of some of these files in the later chapters.

The Helper directory is where various helper classes are located. These classes are usually used to abstract various store configuration values into the getter methods.

The i18n directory is where the module translation package CSV files are stored.

The Module directory is where the entities, resource entities, collections, and various other business classes can be found.

The view directory contains all the module administrator and storefront template files (.phtml and .html) and static files (.js and .css).

In this chapter, we took a quick look at the technology stack used in Magento. We discussed how Magento, being an open source product, takes extensive use of other open source projects and libraries such as MySQL, Apache, Nginx, Zend Framework, Symfony, jQuery, and so on. We then learned how these libraries are arranged into directories. Finally, we explored one of the existing core modules and briefly took a look at an example of a module's structure.

In the next chapter, we are going to tackle the environment setup so that we can get Magento installed and ready for development. 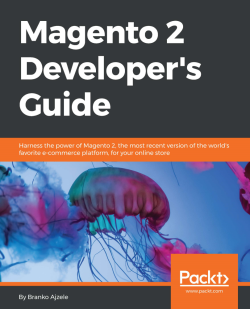