It's never been more important to have the ability to develop an App for Mac OS X. Whether it’s a System Preference, a business app that accesses  information in the Cloud, or an application that uses multi-touch or uses a camera, you will have a solid foundation in app development to get the job done.

Mac Application Development by Example takes you through all the aspects of using the Xcode development tool to produce complete working apps that cover a broad range of topics. This comprehensive book on developing applications covers everything a beginner needs to know and demonstrates the concepts using examples that take advantage of some of the most interesting hardware and software features available.

You will discover the fundamental aspects of OS X development while investigating innovative platform features to create a final product which take advantage of the unique aspects of OS X.

This book provides you with an illustrated and annotated guide to bring your idea to life using fundamental concepts that work on Mac.

This chapter will walk us through the steps needed to set up Xcode as well as the development of the SimpleCalc App. SimpleCalc will allow us to take two numbers and perform addition, subtraction, multiplication, and division. This App is intentionally kept simple because we have many things to learn about how to develop Apps in this chapter.

In this chapter, we shall learn the following:

Before we start to develop our first Mac OS X program, we need to locate the tools needed to create programs. There are several different choices for software development on Mac OS X and the tools that we will select depend on the programming environment that we want to use. Because we want to write our programs using the native Objective-C programming language and the Cocoa frameworks we are going to use Apple's free Integrated Development Environment (IDE), called Xcode.

The code in this book has been developed and tested with Xcode 4.3.

The Cocoa frameworks consist of libraries, Application Programming Interfaces (APIs), and runtimes that form the development layer for all of Mac OS X. By developing with Cocoa, we will be creating applications the same way Mac OS X itself is created. Our application will automatically inherit the behavior and appearances of Mac OS X. Using Cocoa with Xcode IDE is the best way to create native Mac applications.

For Mac OS X, Apple provides the Xcode IDE for free in the Mac OS X App store. We are going to install the Xcode IDE so that we can start making our first App. To do this, we need to follow these steps:

Because Apple distributes Xcode through the Mac App store, we were able to find and install developer tools in the same way we would find any App that is available in the store.

When we want to build a Mac OS X App, we need to first create an Xcode project. The Xcode project is the place that we keep all of the parts (code, icons, user interface, and images) that Xcode will put together to build our App.

Now that we have installed Xcode, we can start using it to write our own Mac OS X App. Let's get started:

When we clicked on the Create button, Xcode created the new project from the template that we chose and displayed its main interface window.

The main Xcode window can be quite overwhelming. The following screenshot shows the entire interface simply to give us an idea of its scope. We don't need to understand all of the sections or be intimidated by Xcode's main window. As we get deeper into programming, we will learn more about each part of the window. 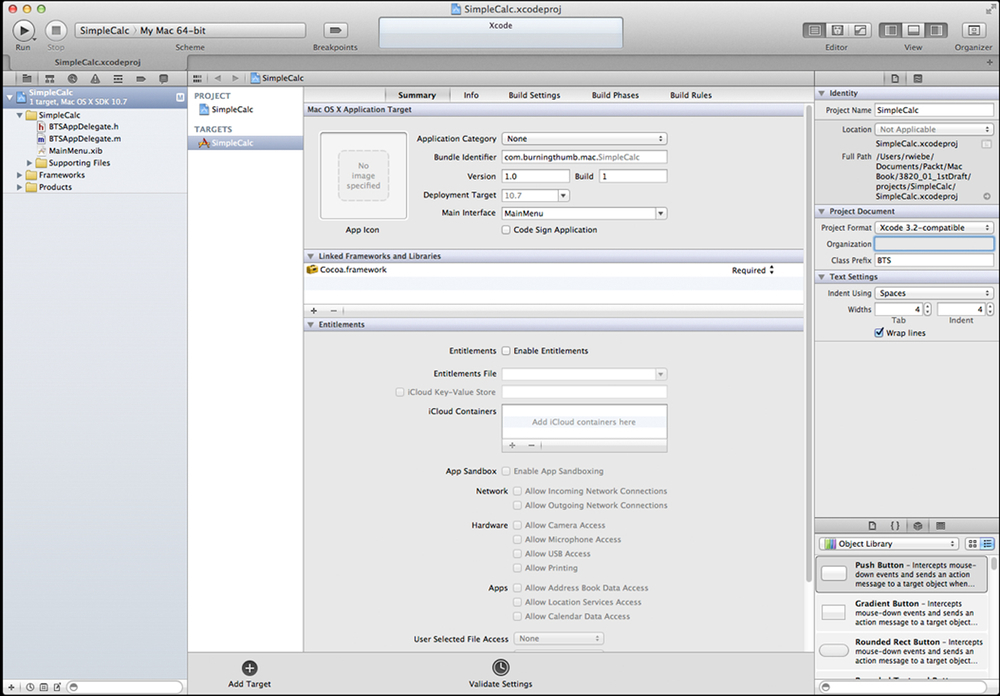 As we progress in our App development and become more familiar with Xcode, we will become comfortable with the contents of this interface. Xcode's interface is very similar to iTunes. It contains the following:

It is a good idea to take some time now to become familiar with the meaning of each of the little icons for the navigator section of the Xcode view, which appear across the top of the navigation area on the left-hand side of the window. The following table gives descriptions of these icons:

Xcode will sometimes change the selected navigator based on actions that we perform or events that occur. It is useful to know that we can always switch back to the navigator that we want to see by clicking on the appropriate icon.

When we used Xcode to create a new project from a template, Xcode did a lot of things behind the scenes that we need to understand. The best way to understand what Xcode did is to look at the contents of the project navigator.

Time for action – examine the items in the project navigator

Each file type is explained in the following table:

By default, Xcode will configure our project to run only on the latest version of Mac OS X with the generic App Icon. Sometimes we may want our project to run on an earlier version of Mac OS X. For example, if we want to give our software to someone with an older computer or if we want to put our software in the Mac App store. This setting is called the Mac OS X deployment target.

We will always want to assign an icon to our App so that we can easily identify our App on the Mac desktop. This setting is called the App Icon.

To change the Mac OS X deployment target for our project we need to do the following:

When we set up the Deployment Target and App Icon, we made changes to our Xcode project. Xcode will use those changes and apply them to the App when we build it so that the App is ready to run on the versions of Mac OS X that we need and the Finder will display our unique icon to identify our App on the desktop.

Have a go hero – make your own icon

Create your own 512 x 512 bitmapped image, save it in .png format, and put it in the iconset folder for the SimpleCalc App. You can use any image editing software that you like. You may want to create all of the required image sizes so that you don't get warnings from Xcode. The following screenshot shows the images of all required sizes present in the SimpleCals.iconset folder:

If you need a free bitmap editor take a look at Gimp for Mac OS X:

When we use an Xcode template to create an App, Xcode creates a project that will build a fully functional App. The App will display a menu bar, display a window, allow us to drag the window around and even present an About box when the About menu item is selected. An Xcode template is the perfect starting point for any App.

To run the SimpleCalc App that Xcode created from its template do the following steps:

Xcode created a fully functional App from its template and we were able to build and run the App. When the App was running, we were able to use its menu and move around its windows, and quit from the App back to Xcode.

When we create a project from an Xcode template, the resulting App needs to be customized to provide the interface that we want in our App. So as soon as we have created the basic project we need to make our interface changes.

The way that we implement our features is to open the files created from the template and change their contents to include the new program code that implements the behaviors that we want to add.

When we create a project from an Xcode template, the resulting App needs to be customized to provide the behavior that we want in our App. So as soon as we have created the basic project we need to make our behavior changes.

The following steps will help us implement the SimpleCalc behavior:

We created and implemented the behavior for our SimpleCalc App (including removing the beep). Now when we run SimpleCalc we can enter two numbers and press one of the operation buttons to see the result as shown in the following screenshot: 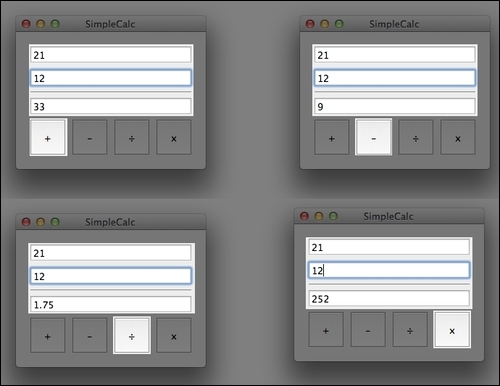 Once we can successfully run our App from Xcode and it is doing everything that we want it to do, it's time to build our App as a standalone package that we can install in our Applications folder.

Time for action – building and installing the SimpleCalc App

Let's learn how to build and install the SimpleCalc app:

We built a standalone Mac OS X App that we can copy from the Release folder to our Applications folder and double-click to run just like any standard Mac OS X App as shown in the following screenshot:

In this chapter, we have covered everything that we need to know to develop Mac OS X Apps.

Specifically, we covered how to install the Xcode IDE from the Mac App store and how to create a new Xcode project from a template. We then identified the different types of files needed to create a Mac OS X App. Then we customized the Xcode template and created a new icon for our App. Finally we created the user interface and actions for our App so that we could build it for installation into the Applications folder.

Now that we've learned how to develop a basic Mac OS X App, we need to take a small diversion in our route to learn what to do when the unexpected happens and the debugger appears when least expected – which is the topic of the next chapter. 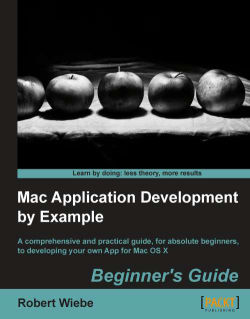