This book details how you can use the LLVM compiler infrastructure libraries effectively, and will enable you to design your own custom compiler with LLVM in a snap.

We start with the basics, where you’ll get to know all about LLVM. We then cover how you can use LLVM library calls to emit intermediate representation (IR) of simple and complex high-level language paradigms. Moving on, we show you how to implement optimizations at different levels, write an optimization pass, generate code that is independent of a target, and then map the code generated to a backend. The book also walks you through CLANG, IR to IR transformations, advanced IR block transformations, and target machines.

By the end of this book, you’ll be able to easily utilize the LLVM libraries in your own projects.

The LLVM Compiler infrastructure project, started in 2000 in University of Illinois, was originally a research project to provide modern, SSA based compilation technique for arbitrary static and dynamic programming languages. Now it has grown to be an umbrella project with many sub projects within it, providing a set of reusable libraries having well defined interfaces.

LLVM is implemented in C++ and the main crux of it is the LLVM core libraries it provides. These libraries provide us with opt tool, the target independent optimizer, and code generation support for various target architectures. There are other tools which make use of core libraries, but our main focus in the book will be related to the three mentioned above. These are built around LLVM Intermediate Representation (LLVM IR), which can almost map all the high-level languages. So basically, to use LLVM's optimizer and code generation technique for code written in a certain programming language, all we need to do is write a frontend for a language that takes the high level language and generates LLVM IR. There are already many frontends available for languages such as C, C++, Go, Python, and so on. We will cover the following topics in this chapter:

Modular design and collection of libraries

The most important thing about LLVM is that it is designed as a collection of libraries. Let's understand these by taking the example of LLVM optimizer opt. There are many different optimization passes that the optimizer can run. Each of these passes is written as a C++ class derived from the Pass class of LLVM. Each of the written passes can be compiled into a .o file and subsequently they are archived into a .a library. This library will contain all the passes for opt tool. All the passes in this library are loosely coupled, that is they mention explicitly the dependencies on other passes.

When the optimizer is ran, the LLVM PassManager uses the explicitly mentioned dependency information and runs the passes in optimal way. The library based design allows the implementer to choose the order in which passes will execute and also choose which passes are to be executed based on the requirements. Only the passes that are required are linked to the final application, not the entire optimizer. 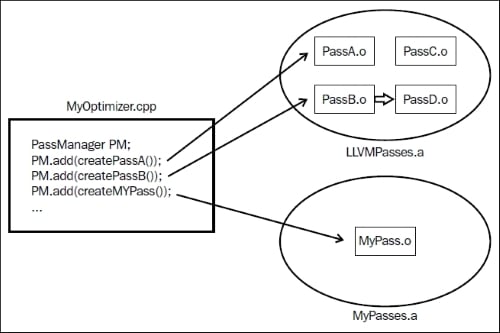 The code generator also makes use of this modular design like the Optimizer, for splitting the code generation into individual passes, namely, instruction selection, register allocation, scheduling, code layout optimization, and assembly emission.

In each of the following phases mentioned there are some common things for almost every target, such as an algorithm for assigning physical registers available to virtual registers even though the set of registers for different targets vary. So, the compiler writer can modify each of the passes mentioned above and create custom target-specific passes. The use of the tablegen tool helps in achieving this using table description .td files for specific architectures. We will discuss how this happens later in the book.

Another capability that arises out of this is the ability to easily pinpoint a bug to a particular pass in the optimizer. A tool name Bugpoint makes use of this capability to automatically reduce the test case and pinpoint the pass that is causing the bug.

Getting familiar with LLVM IR

LLVM Intermediate Representation (IR) is the heart of the LLVM project. In general every compiler produces an intermediate representation on which it runs most of its optimizations. For a compiler targeting multiple-source languages and different architectures the important decision while selecting an IR is that it should neither be of very high-level, as in very closely attached to the source language, nor it should be very low-level, as in close to the target machine instructions. LLVM IR aims to be a universal IR of a kind, by being at a low enough level that high-level ideas may be cleanly mapped to it. Ideally the LLVM IR should have been target-independent, but it is not so because of the inherent target dependence in some of the programming languages itself. For example, when using standard C headers in a Linux system, the header files itself are target dependent, which may specify a particular type to an entity so that it matches the system calls of the particular target architecture.

Most of the LLVM tools revolve around this Intermediate Representation. The frontends of different languages generate this IR from the high-level source language. The optimizer tool of LLVM runs on this generated IR to optimize the code for better performance and the code generator makes use of this IR for target specific code generation. This IR has three equivalent forms:

Now let's take an example to see how this LLVM IR looks like. We will take a small C code and convert it into LLVM IR using clang and try to understand the details of LLVM IR by mapping it back to the source language.

Use the clang frontend with the following options to convert it to LLVM IR:

Now let's look at the IR generated and see what it is all about. You can see the very first line giving the ModuleID, that it defines the LLVM module for add.c file. An LLVM module is a top–level data structure that has the entire contents of the input LLVM file. It consists of functions, global variables, external function prototypes, and symbol table entries.

The following lines show the target data layout and target triple from which we can know that the target is x86_64 processor with Linux running on it. The datalayout string tells us what is the endianess of machine ('e' meaning little endian), and the name mangling (m : e denotes elf type). Each specification is separated by '–'and each following spec gives information about the type and size of that type. For example, i64:64 says 64 bit integer is of 64 bits.

Then we have a global variable globvar. In LLVM IR all globals start with '@' and all local variables start with '%'. There are two main reasons why the variables are prefixed with these symbols. The first one being, the compiler won't have to bother about a name clash with reserved words, the other being that the compiler can come up quickly with a temporary name without having to worry about a conflict with symbol table conflicts. This second property is useful for representing the IR in static single assignment (SSA) from where each variable is assigned only a single time and every use of a variable is preceded by its definition. So, while converting a normal program to SSA form, we create a new temporary name for every redefinition of a variable and limit the range of earlier definition till this redefinition.

Now let's see how the add function is represented in LLVM IR. define i32 @add(i32 %a) is very similar to how functions are declared in C. It specifies the function returns integer type i32 and takes an integer argument. Also, the function name is preceded by '@', meaning it has global visibility.

Within the function is actual processing for functionality. Some important things to note here are that LLVM uses a three-address instruction, that is a data processing instruction, which has two source operands and places the result in a separate destination operand (%4 = add i32 %2, %3). Also the code is in SSA form, that is each value in the IR has a single assignment which defines the value. This is useful for a number of optimizations.

The code that follows the attributes is for the ident directive that identifies the module and compiler version.

LLVM tools and using them in the command line

Until now, we have understood what LLVM IR (human readable form) is and how it can be used to represent a high-level language. Now, we will take a look at some of the tools that LLVM provides so that we can play around with this IR converting to other formats and back again to the original form. Let's take a look at these tools one by one along with examples.

Before going ahead we must note that all the tools mentioned in this chapter are meant for compiler writers. An end user can directly use clang for compilation of C code without converting the C code into intermediate representation

In this chapter, we looked into the modular design of LLVM: How it is used in the opt tool of LLVM, and how it is applicable across LLVM core libraries. Then we took a look into LLVM intermediate representation, and how various entities (variables, functions etc.) of a language are mapped to LLVM IR. In the last section, we discussed about some of the important LLVM tools, and how they can be used to transform the LLVM IR from one form to another.

In the next chapter, we will see how we can write a frontend for a language that can output LLVM IR using the LLVM machinery.

The book is focused on re-telling the documentation on C++ LLVM libraries and doesn't goo deep into "why", concentrating on "how". 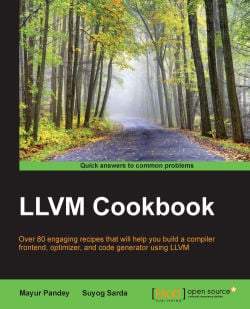 Over 80 engaging recipes that will help you build a compiler frontend, optimizer, and code generator using LLVM

Over 80 engaging recipes that will help you build a compiler frontend, optimizer, and code generator using LLVM 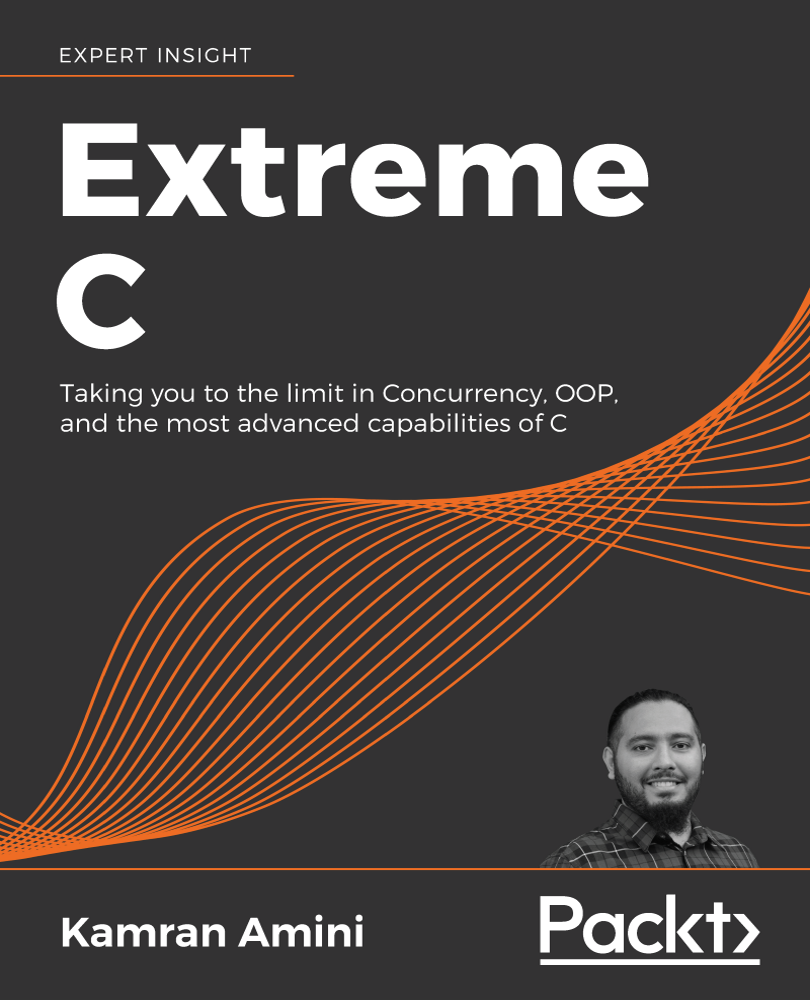 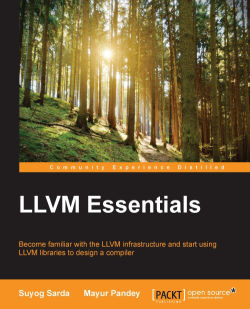