Django is a high-level Python web framework that was developed by a fast-moving online-news operation to meet the stringent twin challenges of newsroom deadlines and the needs of web developers. It is designed to promote rapid development and clean, pragmatic design and lets you build high-performing, elegant web applications rapidly. Django focuses on automating as much as possible and adhering to the DRY (Don't Repeat Yourself) principle, making it easier to build high-performance web applications faster, with less code.

This book will show you how to assemble Django's features and leverage its power to design, develop, and deploy a fully-featured website. It will walk you through the creation of an example web application, with lots of code. Each chapter will add new features to the site, and show what parts of Django to work on to build these features.

This book has been specifically written for Python developers new to Django, and it's goal is to help you put together Django applications as quickly as possible. This book will give you clear, concise and, of course, practical guidance to take you from the basics of creating pages with Django through to learning the skills that will make you a Django developer to be reckoned with.

Welcome! In this book, you will learn about Django, an Open Source web framework that enables you to build clean and feature-rich web applications with minimal time and effort. Django is written in Python, a general purpose language that is well suited for developing web applications. Django loosely follows a model-view-controller design pattern, which greatly helps in building clean and maintainable web applications.

This chapter gives you an overview of the technologies used in this book. The following chapters will take you through a tutorial for building a social bookmarking application from the group using Django.

In this introduction, you will read about the following:

The MVC Pattern in Web Development

Web development has made great progress during the last few years. It began as a tedious task that involved using CGI for interfacing external programs with the web server. CGI applications used standard I/O facilities available to the C programming language in order to manually parse user input and produce page output. In addition to being difficult to work with, CGI required a separate copy of the program to be launched for each request, which used to quickly overwhelm servers.

Next, scripting languages were introduced to web development, and this inspired developers to create more efficient technologies. Languages such as Perl and PHP quickly made their way into the world of web development, and as a result, common web tasks such as cookie handling, session management, and text processing became much easier. Although scripting languages included libraries to deal with day-to-day web-related tasks, they lacked unified frameworks, as libraries were usually disparate in design, usage, and conventions. Therefore, the need for cohesive frameworks arose.

A few years ago, the model-view-controller pattern came for web-based applications was introduced. This software engineering pattern separates data (model), user interface (view), and data handling logic (controller), so that one can be changed without affecting the others. The benefits of this pattern are obvious. With it, designers can work on the interface without worrying about data storage or management. And developers are able to program the logic of data handling without getting into the details of presentation. As a result, the MVC pattern quickly found its way into web languages, and serious web developers started to embrace it in preference to previous techniques.

The diagram below shows how each of the components of the MVC pattern interact with each other to serve a user request:

Python is a general purpose programming language. Although it is used for a wide variety of applications, Python is very suitable for developing web applications. It has a clean and elegant syntax, and is supported by a large library of standard and contributed modules, which covers everything from multi-threading to the zipping of files. The language's object-oriented model is especially suited for MVC style development.

Sooner or later, performance will become a major concern with web projects, and Python's runtime environment shines here, as it is known to be fast and stable. Python supports a wide range of web servers through modules, including the infamous Apache. Furthermore, it is available for all the major platforms: UNIX/Linux, Windows, and Mac. Python also supports a wide array of database servers, but you won't have to deal directly with them; Django provides a unified layer of access to all available database engines, as we will see later.

Python is free software; you can download and use it freely from http://python.org/. You are even allowed to distribute it without having to pay any fees. Access to the source code is available to those who want to add features or fix bugs. As a result, Python enjoys a large community of developers who quickly fix bugs and introduce new features.

Python is very easy to learn, and it is being adopted in many universities as the first programming language to be taught. Although this book assumes working knowledge of Python, advanced features will be explained as they are used. If you want to refresh your Python knowledge, you are recommended to read the official Python tutorial available at http://python.org/doc/ before continuing with this book.

To sum up, Python was chosen over many other scripting languages for this book for the following reasons:

If you want to learn more about Python and its features, the official Python website at http://python.org/ and the Python book "Dive Into Python" (freely available at http://www.diveintopython.org/) are both excellent sources.

Since the spread of the MVC pattern into web development, Python has provided quite a few choices when it comes to web frameworks, such as Django, TurboGears and Zope. Although choosing one out of many can be confusing at first, having several competing frameworks can only be a good thing for the Python community, as it drives the development of all frameworks further and provides a rich set of options to choose from.

Django is one of the available frameworks for Python, so the question is: what sets it apart to become the topic of this book, and what makes it popular in the Python community? The next subsections will answer these questions by providing an overview of the main advantages of Django.

First of all, Django provides a set of tightly integrated components; all of these components have been developed by the Django team themselves. Django was originally developed as an in-house framework for managing a series of news-oriented websites. Later its code was released on the Internet and the Django team continued its development using the Open Source model. Because of its roots, Django's components were designed for integration, reusability and speed from the start.

The URL system in Django is very flexible and powerful; it lets you define patterns for the URLs in your application, and define Python functions to handle each pattern. This enables developers to create URLs that are both user and search engine friendly.

Django comes with an administration interface that is ready to be used. This interface makes the management of your application's data a breeze. It is also highly flexible and customizable.

Django supports multi-lingual websites through its built-in internationalization system. This can be very valuable for those working on websites with more than one language. The system makes translating the interface a very simple task.

The standard features expected of a web framework are all available in Django. These include the following:

Even though Django does not provide a JavaScript library to simplify working with Ajax, choosing one and integrating it with Django is a straightforward matter, as we will see in later chapters.

So to conclude, Django provides a set of integrated and mature components, with excellent documentation, at http://www.djangoproject.com/documentation/, thanks to its large community of developers and users. With Django available, there has never been a better time to start learning a web development framework!

Django started as an internal project at the Lawrence Journal-World newspaper in 2003. The web development team there often had to implement new features or even entire applications within hours. Therefore, Django was created to meet the fast deadlines of journalism websites, whilst at the same time keeping the development process clean and maintainable. By the summer of 2005, Django became mature enough to handle several high traffic sites, and the developers decided to release it to the public as an Open Source project. The project was named after the jazz guitarist Django Reinhardt.

Now that Django is an Open Source project, it has gathered developers and users from all over the world. Bug fixes and new features are introduced on a daily basis, while the original development team keeps an eye on the whole process to make sure that Django remains what it is meant to be—a web framework for building clean, maintainable and reusable web applications.

Web development has achieved large leaps of progress over the last few years. The advent of scripting languages, web frameworks, and Ajax made rapid development of web applications possible and easier than ever. This book takes you through a tutorial for building a Web 2.0 application using two hot technologies—Python and Django. The application allows users to store and share bookmarks. Many of the exciting Web 2.0 applications will be explained and developed throughout this book.

In the next chapter, we will set up our development environment by installing the necessary software, and get a feel for Django by creating our first application. 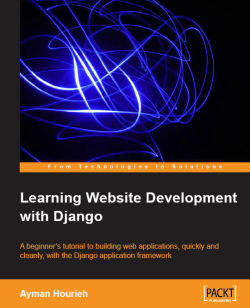