Mongoid helps you to leverage the power of schema-less and efficient document-based design, dynamic queries, and atomic modifier operations. Mongoid eases the work of Ruby developers while they are working on complex frameworks.

Starting with why and how you should use Mongoid, this book covers the various components of Mongoid. It then delves deeper into the detail of queries and relations, and you will learn some tips and tricks on improving performance. With this book, you will be able to build robust and large-scale web applications with Mongoid and Rails.

Starting with the basics, this book introduces you to components such as moped and origin, and how information is managed, learn about the various datatypes, embedded documents, arrays, and hashes. You will learn how a document is stored and manipulated with callbacks, validations, and even atomic updates. This book will then show you the querying mechanism in detail, right from simple to complex queries, and even explains eager loading, lazy evaluation, and chaining of queries. Finally, this book will explain the importance of performance tuning and how to use the right indexes. It also explains MapReduce and the Aggregation Framework.


Chapter 1. What's so Awesome about Mongoid?

The name MongoDB is derived from humongous. We use DataMappers to work with MongoDB. In Ruby, the most popular MongoDB mapper is Mongoid, pronounced mann-gyod. But is this the only mapper available? There also exists MongoMapper, MongoODM, and in the realm of open source there could well be many more!

So, what is so awesome about Mongoid? In a nutshell, its ability to gel with the Rails framework makes it very popular. For me, it is this adaptability to refactor and improve that makes Mongoid a very close ally of Rails.

In this chapter, we shall get a taste of the power of Mongoid. We shall see:

Sodibee (pronounced saw-di-bee) is a library-management system that can manage books, reviews, authors, and bookings. Here are some of the functions that are supported in Sodibee:

In the course of this book we will be working with the latest versions of Ruby 2.0, Mongoid 4, Rails 4, and MongoDB 2.4.

To check the Ruby version, check the version that is installed using the following command:

Ruby 2.1 is due to be released in December, 2013. Everything in this book will be fully compatible with Ruby 2.1 too.

We are currently using MongoDB v2.4.6—verify that, using the following command:

If you don't see this, it's quite likely that you have not installed MongoDB or it isn't running. Get going!

At the time of writing this book, the Rails version was 4.0.0. All commands would be fully compatible with the latest Rails version.

When you run the preceding command, it initiates a bundle install and updates our bundle with the default gems. If you are as impatient as I am, you may interrupt the process and press Ctrl + C to stop it, as we need to modify Gemfile to add other gems anyway.

Mongoid master is currently in sync with Rails 4. So, if we install using the released gem, it will install Version 3.x.

We're almost done. Issue the following command to update the bundle with our Mongoid gem:

If you did not use the –O option, you can run the following instructions to remove ActiveRecord from the application as we don't need it. Check and remove database.yml under config, if it has been generated. Next ensure that application.rb under config has the following lines:

Notice that there is no require "rails/all". This ensures that the ActiveRecord railtie is not loaded. However, sometimes this causes a conflict with the environment settings. So, in case you face a problem starting the Rails console, remove the following line from development.rb under config/environments (and as required from the other environment files):

This should get us going. Now issue the following command to set up Mongoid:

This generates mongoid.yml under config.

Test this basic Rails setup by starting the console.

If you see the preceding command prompt, we are set.

Now that we have our environment set up, let's create our basic models. In the Author model, we shall now add a field called name, and create a relation between the Author model and the Address model.

Now, let's create the Address model with a number of fields and relations.

Now, let's test the code that we have written.

Did you notice that we are not using the hash rocket (=>) notation for defining the hash of options for the field method? Instead of :type => String, we are using the JSON notation instead. We shall follow this standard throughout the book.

Now that we have created the models, let's test it out quickly:

As we can see, this creates an Author object and its corresponding Address object. Mongoid includes ActiveModel and you may notice the similarity in these methods if you have used ActiveRecord.

We have used create_address because an author has only one embedded address. If, an author had multiple addresses, we would have used a.addresses.create.

Here, we have double-checked that the author is indeed persisted to the database. Since this is MongoDB, we can dynamically add attributes to the object!

When we issued the command Author.create(name: "Charles Dickens"), it generated the following output:

Now, when we issued the second command a.create_address(street: "Picadilly Circus", city: "London", country: "UK"), it updated the Author object, and created an embedded Address document as seen in the following line:

Now that we have seen what INSERT and UPDATE look like, querying the Author collection with Author.first generates the following result:

And since we want to query the address, we look it up using Author.first.address. This generates the following line:

Now there's something interesting about the preceding output—the last two commands on the Author model fired the same query, and look at the difference in the query result! The same query is fired because the address is an embedded document. So, to fetch the address of an author, you fetch the Author object itself. The difference of 66 ms and 0.5 ms in the query response is because for the first lookup MongoDB loads the document from the disk and puts it into its memory-mapped file. The second time, the document is simply looked up in cache (the memory-mapped file) and hence the lookup is faster.

When we issued the command a['language'] = "English", and saved the object using a.save; this is what we see:

This is the result of dynamic attribute update. Even though we did not specify language as a field in the Author model, we can set it as an attribute for the Author object. Did you notice that the update for dynamic attributes is no different from the standard update query in MongoDB?

However, there is a difference when accessing it in Mongoid. The Author.first.language parameter may throw an error sometimes, but Author.first[:language] will always succeed. Let's see an example:

Here we have created a new Author object. However, when we try to update the object using the dot notation a.language, it gives an error. As we can see in the following command lines, method_missing does not dynamically create the accessor method if the dynamic attribute does not already exist.

Now, if we try to update the dynamic attribute without using the dot notation, it works!

Origin was extracted from Mongoid gem and put into a new gem, so that there is a standard for querying. It has no dependency on any other gem and is a standalone pure query builder. The idea was that this could be a generic DSL that can be used even without Mongoid!

So, now we have a very generic and standard querying pattern. For example, in Mongoid 2.x we had the criteria any_in and any_of, and no direct support for the and, or, and nor operations. In Mongoid 2.x, the only way we could fire a $or or a $and query was like this:

And now in Mongoid 3, we have a cleaner approach.

Origin also provides good selectors directly in our models. So, this is now much more readable:

As we shall see later in the book, Origin has a lot more cool features.

It's important to realize that quite a bit has changed between the two major releases of Mongoid. It's an uncanny coincidence that just like Rails, major versions (2.x and 3.x) differ from each other vastly. Let's take a look at some of the differences between Mongoid 2.x and Mongoid 3.x.

It's also important to know about the other Ruby ODMs (Object Document Managers) besides Mongoid. Among the most popular ones out there, is MongoMapper.

Mongoid has power. Just like Rails, it evolves fast. It has Moped and Origin that ensure speed, flexibility, and consistency.

In the upcoming chapters, we shall see what documents are, in the context of Mongoid. We shall learn about the different data types, dynamic attributes, and how data is managed.

The journey has just begun. 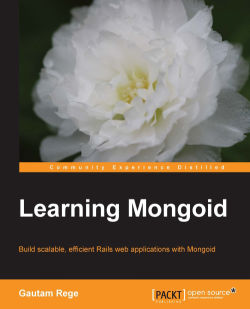