This book teaches you the concepts, techniques, and tools to understand the behavior and characteristics of malware through malware analysis. It also teaches you techniques to investigate and hunt malware using memory forensics.

This book introduces you to the basics of malware analysis, and then gradually progresses into the more advanced concepts of code analysis and memory forensics. It uses real-world malware samples, infected memory images, and visual diagrams to help you gain a better understanding of the subject and to equip you with the skills required to analyze, investigate, and respond to malware-related incidents.

In this chapter, you will learn the following topics:

Malware is a code that performs malicious actions; it can take the form of an executable, script, code, or any other software. Attackers use malware to steal sensitive information, spy on the infected system, or take control of the system. It typically gets into your system without your consent and can be delivered via various communication channels such as email, web, or USB drives.

The following are some of the malicious actions performed by malware:

A handy resource for understanding malware terminologies and definitions is available at https://blog.malwarebytes.com/glossary/.

Classifying malware based on their functionalities may not always be possible because a single malware can contain multiple functionalities, which may fall into a variety of categories mentioned previously. For example, malware can include a worm component that scans the network looking for vulnerable systems and can drop another malware component such as a backdoor or a ransomware upon successful exploitation.

2. What Is Malware Analysis?

Malware analysis is the study of malware's behavior. The objective of malware analysis is to understand the working of malware and how to detect and eliminate it. It involves analyzing the suspect binary in a safe environment to identify its characteristics and functionalities so that better defenses can be built to protect an organization's network.

The primary motive behind performing malware analysis is to extract information from the malware sample, which can help in responding to a malware incident. The goal of malware analysis is to determine the capability of malware, detect it, and contain it. It also helps in determining identifiable patterns that can be used to cure and prevent future infections. The following are some of the reasons why you will perform malware analysis:

Threat intelligence teams very often use the indicators determined from a malware analysis to classify the attack and attribute them to known threats. Malware analysis can help you get information about who could be behind the attack (competitor, state-sponsored attack group, and so on).

Integrating different analysis techniques while performing malware analysis can reveal a wealth of contextual information, which will prove to be valuable in your malware investigation.

5. Setting Up The Lab Environment

Analysis of a hostile program requires a safe and secure lab environment, as you do not want to infect your system or the production system. A malware lab can be very simple or complex depending on the resources available to you (hardware, virtualization software, Windows license, and so on). This section will guide you to set up a simple personal lab on a single physical system consisting of virtual machines (VMs). If you wish to set up a similar lab environment, feel free to follow along or skip to the next section (Section 6: Malware Sources).

To create a safe lab environment, you should take the necessary precautions to avoid malware from escaping the virtualized environment and infecting your physical (host) system. The following are a few points to remember when setting up the virtualized lab:

The lab architecture I will be using throughout the book consists of a physical machine (called host machine) running Ubuntu Linux with instances of Linux virtual machine (Ubuntu Linux VM) and Windows virtual machine (Windows VM). These virtual machines will be configured to be part of the same network and use Host-only network configuration mode so that the malware is not allowed to contact the Internet and network traffic is contained in the isolated lab environment. 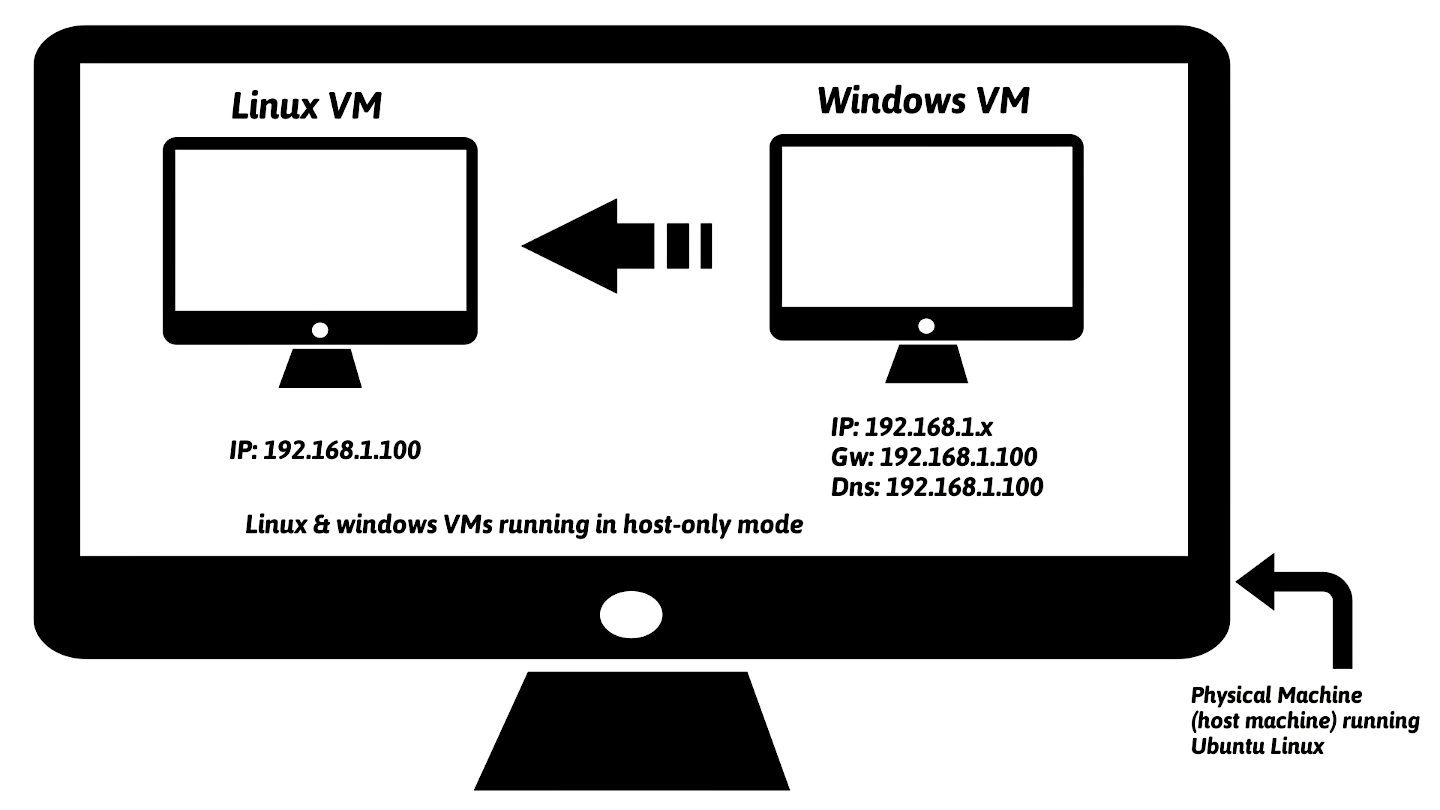 It is also possible to set up a lab consisting of multiple VMs running different versions of Windows; this will allow you to analyze the malware specimen on various versions of Windows operating systems. An example configuration containing multiple Windows VMs will look similar to the one shown in the following diagram: 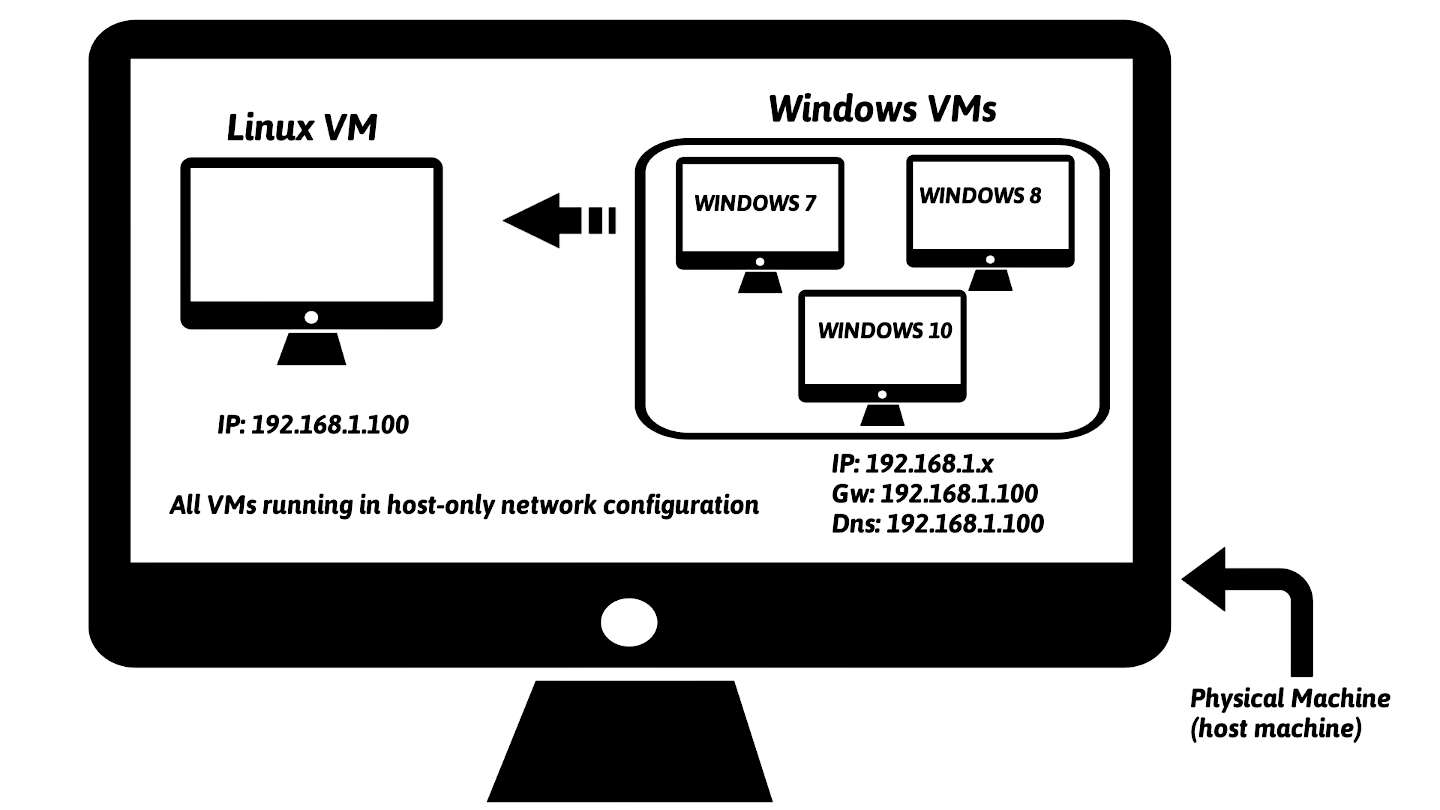 5.3 Setting Up And Configuring Linux VM

To set up the Linux VM, I will use Ubuntu 16.04.2 LTS Linux distribution (http://releases.ubuntu.com/16.04/). The reason I have chosen Ubuntu is that most of the tools covered in this book are either preinstalled or available through the apt-get package manager. The following is a step-by-step procedure to configure Ubuntu 16.04.2 LTS on VMware and VirtualBox. Feel free to follow the instructions given here depending on the virtualization software (either VMware or VirtualBox) installed on your system:

If you are not familiar with installing and configuring virtual machines, refer to VMware's guide at http://pubs.vmware.com/workstation-12/topic/com.vmware.ICbase/PDF/workstation-pro-12-user-guide.pdf or the VirtualBox user manual (https://www.virtualbox.org/manual/UserManual.html).

In VirtualBox, shut down Ubuntu VM and then bring up Settings. Select Network and change the adapter settings to Host-only Adapter as shown in the following diagram; click on OK.

On VirtualBox, sometimes when you choose the Host-only adapter option, the interface name might appear as Not selected. In that case, you need to first create at least one host-only interface by navigating to File| Preferences | Network | Host-only networks | Add host-only network. Click on OK; then bring up the Settings. Select Network and change the adapter settings to Host-only Adapter, as shown in the following screenshot. Click on OK.

Add the following entries at the end of the file (make sure you replace ens33 with the interface name on your system) and save it:

The /etc/network/interfaces file should now look like the one shown here. Newly added entries are highlighted here:

Then restart the Ubuntu Linux VM. At this point, the IP address of the Ubuntu VM should be set to 192.168.1.100. You can verify that by running the following command:

Go to the service_bind_address section in the configuration file and add the entry shown here:

The added entry (highlighted) in the configuration file should look like this:

By default, INetSim's DNS server will resolve all the domain names to 127.0.0.1. Instead of that, we want the domain name to resolve to 192.168.1.100 (the IP address of Linux VM). To do that, go to the dns_default_ip section in the configuration file and add an entry as shown here:

The added entry (highlighted in the following code) in the configuration file should look like this:

Once the configuration changes are done, Save the configuration file and launch the INetSim main program. Verify that all the services are running and also check whether the inetsim is listening on 192.168.1.100, as highlighted in the following code. You can stop the service by pressing CTRL+C:

On Virtualbox, while the virtual machine is powered off, bring up Settings | General | Advanced and make sure that both Shared Clipboard and Drag 'n' Drop are set to Bidirectional. Click on OK.

Apart from the drag and drop feature, it is also possible to transfer files from the host machine to the virtual machine using shared folders; refer to the following for VirtualBox (https://www.virtualbox.org/manual/ch04.html#sharedfolders) and to the following for VMware (https://docs.vmware.com/en/VMware-Workstation-Pro/14.0/com.vmware.ws.using.doc/GUID-AACE0935-4B43-43BA-A935-FC71ABA17803.html).

5.4 Setting Up And Configuring Windows VM

Before setting up the Windows VM, you first need to install a Windows operating system (Windows 7, Window 8, and so on) of your choice in the virtualization software (such as VMware or VirtualBox). Once you have Windows installed, follow these steps: 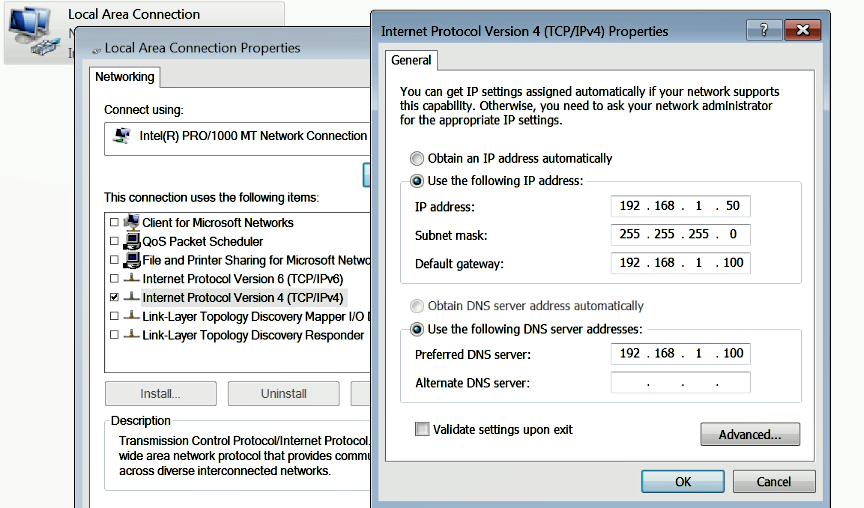 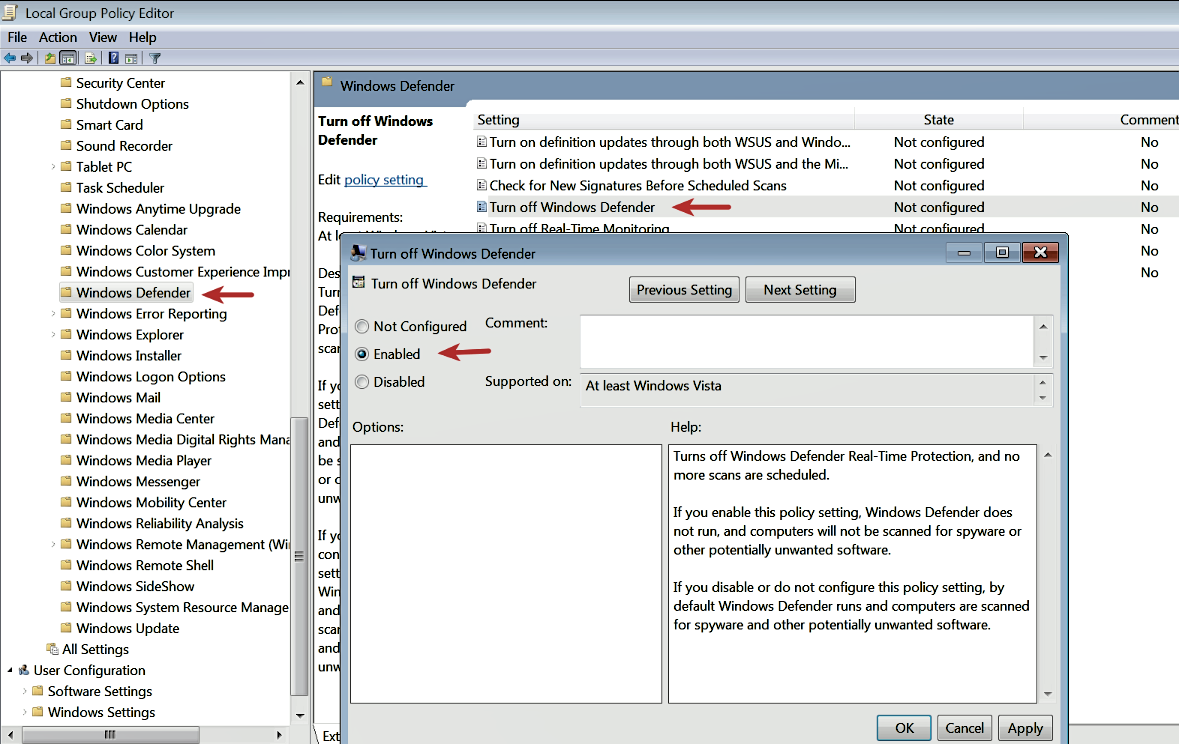 You can find links to various other malware sources in Lenny Zeltser's blog post https://zeltser.com/malware-sample-sources/.

If none of the aforementioned methods work for you and you wish to get the malware samples used in this book, please feel free to contact the author.

Setting up an isolated lab environment is crucial before analyzing malicious programs. While performing malware analysis, you will usually run the hostile code to observe its behavior, so having an isolated lab environment will prevent the accidental spreading of malicious code to your system or production systems on your network. In the next chapter, you will learn about the tools and techniques to extract valuable information from the malware specimen using Static Analysis.

Really useful book to star with

They are perfect ever, very happy to deal with yoh 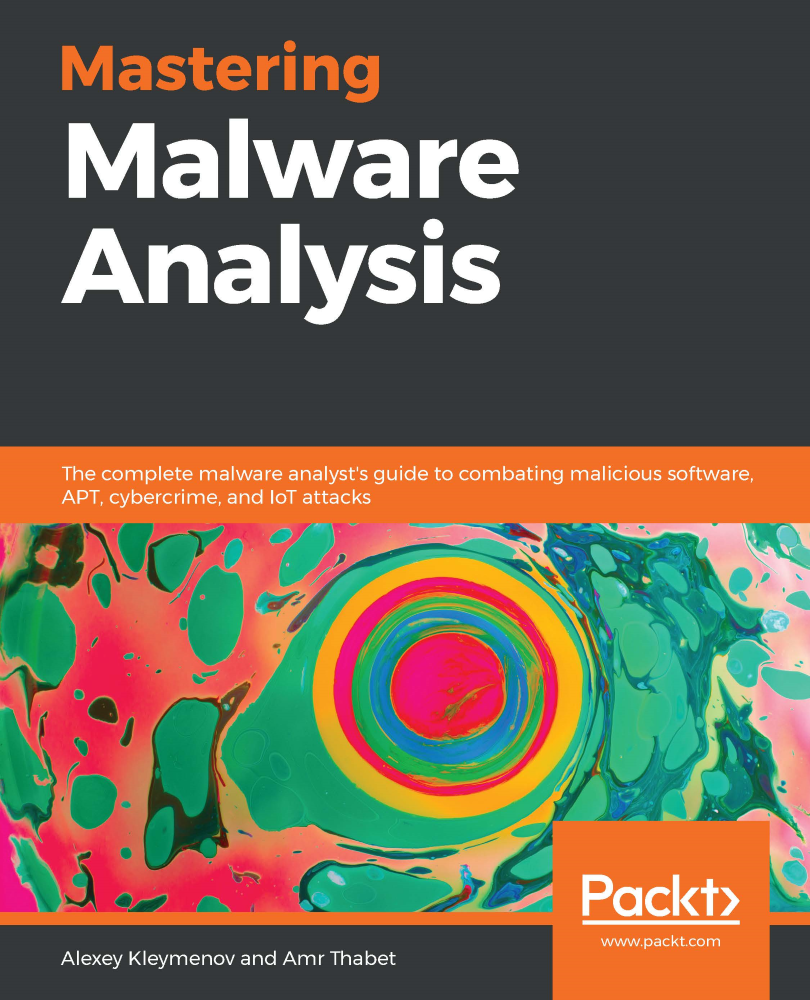 Master malware analysis to protect your systems from getting infected 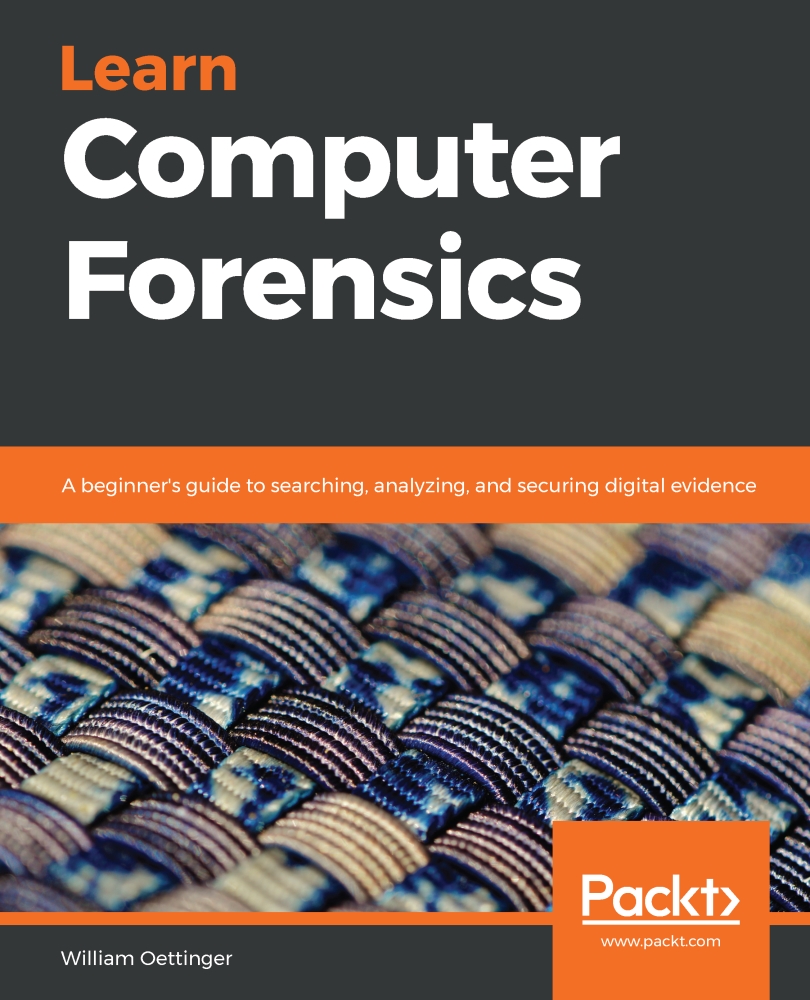 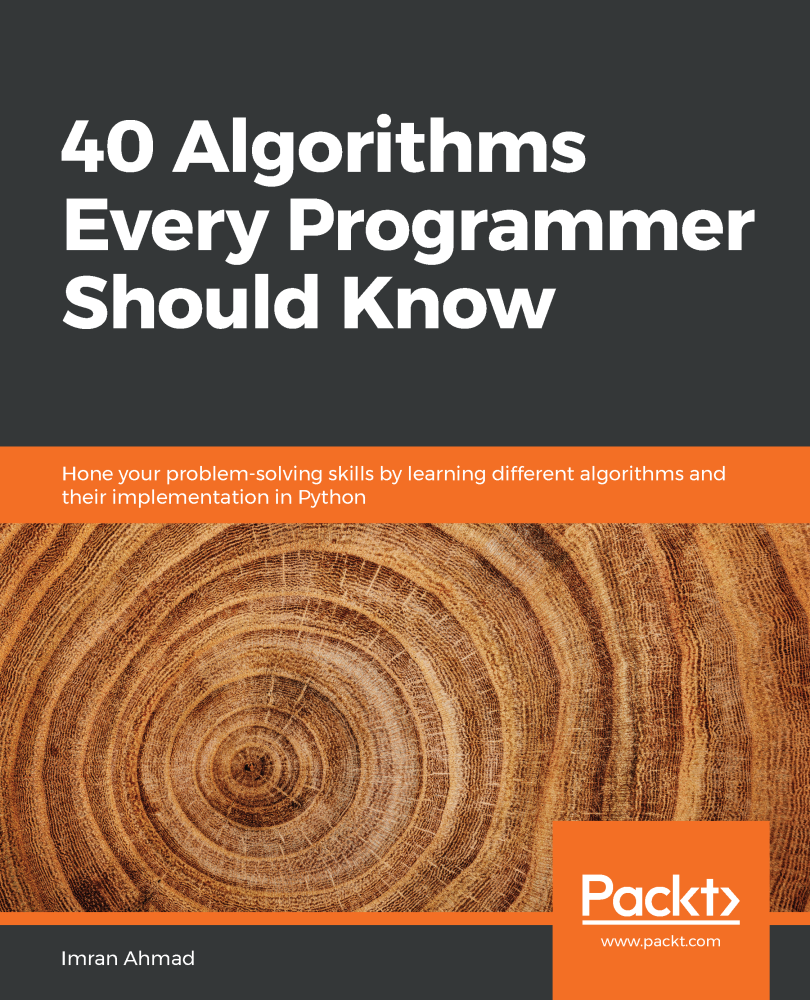 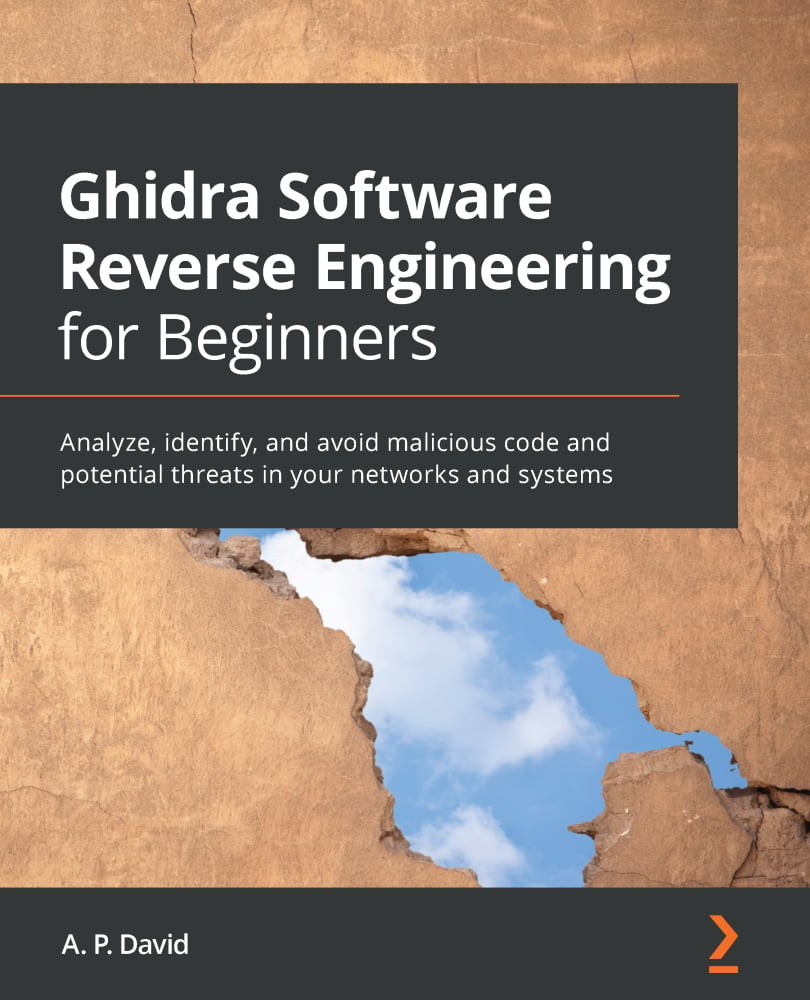 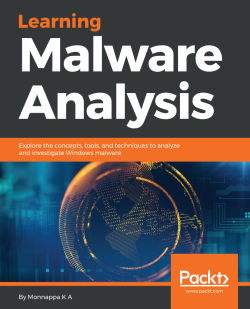