iOS has become one of the most popular mobile operating systems with more than 1.4 million apps available in the iOS App Store. Some security weaknesses in any of these applications or on the system could mean that an attacker can get access to the device and retrieve sensitive information. This book will show you how to conduct a wide range of penetration tests on iOS devices to uncover vulnerabilities and strengthen the system from attacks.

Learning iOS Penetration Testing discusses the common vulnerabilities and security-related shortcomings in an iOS application and operating system, and will teach you to conduct static and dynamic analysis of iOS applications.

This practical guide will help you uncover vulnerabilities in iOS phones and applications. We begin with basics of iOS security and dig deep to learn about traffic analysis, code analysis, and various other techniques. Later, we discuss the various utilities, and the process of reversing and auditing.

In this chapter, we will look at the following topics:

Basics of iOS and application development

iDevices: All Apple devices running iOS are known as iDevices.

First things first, you will require Xcode to develop an iOS application and it will run only on a Mac machine.

Developing the Hello World iOS app should be very simple. Perform the following steps and in few minutes, you will be able to see your first iOS app running:

Developing and executing the Hello World application is very simple and straightforward process. If you are familiar with object-oriented concepts, then developing iOS applications should be easy for you.

You can also deploy this app to iDevice to test. Before introducing Xcode 7, you need to enroll in Apple Developer Program for $99 in order to run the app on iDevice. However, with Xcode 7 version, Apple allows you to deploy and run any number of apps with limited capabilities on any of your devices simply by logging in with your Apple ID. However, if you want to distribute your apps among a team or, let's say, you are an iOS security trainer and need to distribute your vulnerable apps sample among your students, you will have to enroll for the Apple Developer Program. You can visit https://developer.apple.com/programs/enroll/ for more information.

Once you have the provision profile, you are ready to run the app on iDevice. You can also download this Xcode project from online supporting files and run this app with one click.

We provided the Hello World application's Xcode project with this chapter. Download the Xcode project, connect your iDevice to Xcode, and perform the following steps:

Congratulations! You have just developed a simple Hello World iOS application and executed it on the simulator and on iDevice.

If you want to install the application binary that is provided with this book directly, then your device needs to be jailbroken. We will study this concept in depth in the upcoming chapters.

While creating Xcode project, you must have observed different files, such as storyboard, controller, and so on as shown in following screenshot. The iOS applications are based on the Model-View-Controller (MVC) design. This concept is really useful while performing dynamic analysis of an iOS application: 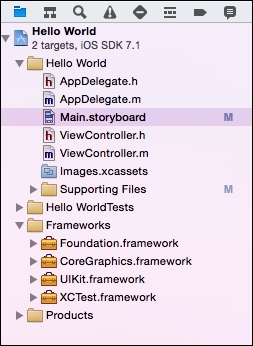 Following is a high-level diagram of the MVC design. It mainly has three components such as Model, View, and Controller. View and Model always communicate via Controller.

Let's take a sample application as shown in the following that takes user input as password, checks with the backend value, and displays whether the password is correct or incorrect.

So, if you have observed, all communication happens through Controller. Now you are proficient with some basics about iOS developments. Let's study iOS security concepts from basics.

In June 2015, Apple released its latest iOS security model. You can find the latest version of this guide at https://www.apple.com/business/docs/iOS_Security_Guide.pdf.

If we look at iOS security guide, iOS provides security right from the hardware level, as shown in the following figure: 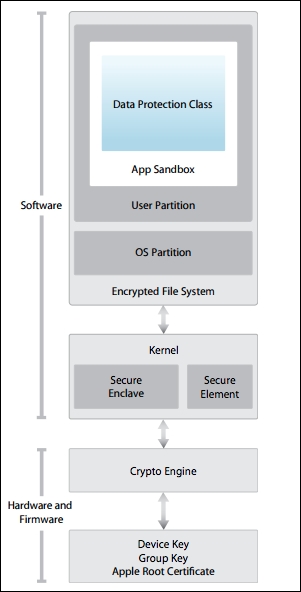 At high level, we can divide the preceding architecture in three parts as shown in the following figure: 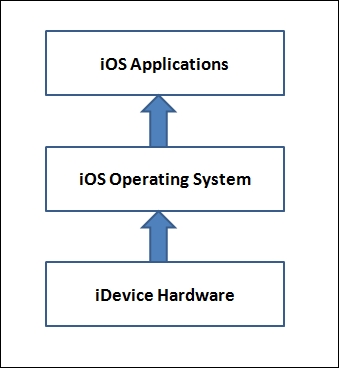 Some key features of the iOS security model are as follows:

The following figure is the block diagram for an iOS secure boot chain: 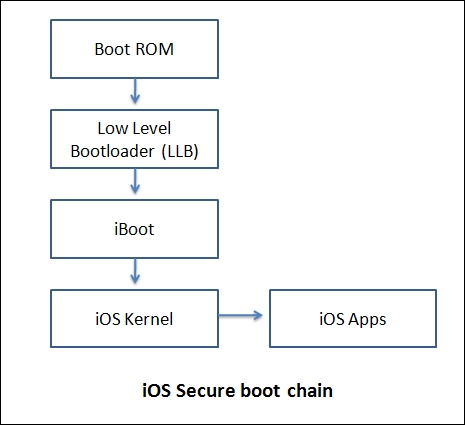 The following is the overall process about how Apple publishes an iOS app on App Store:

Apple's process of checking iOS apps before signing the application is not transparent. Case studies show that Apple does not perform thorough vulnerability assessment of any app. As shown in the following figure, iOS kernel loads applications signed by Apple: 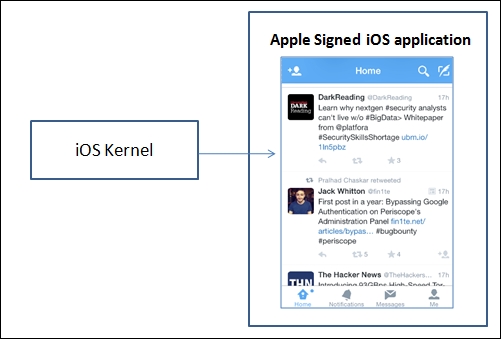 Robust sandboxing features have been built by iOS that prevent the applications from accessing the data or files of other applications. 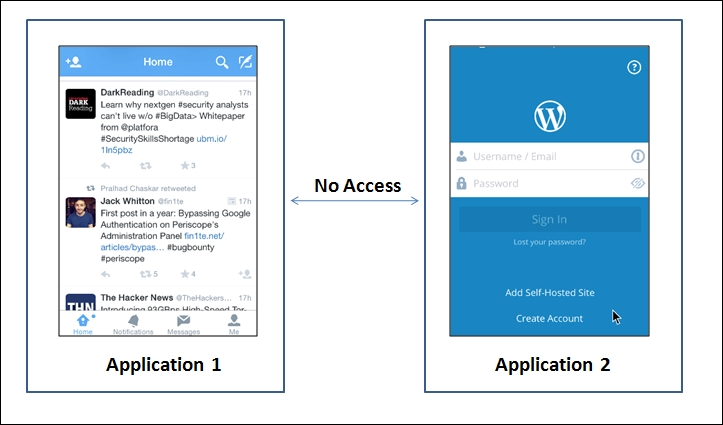 So, as shown in the preceding figure, Application 1 can't access the data of Application 2 by default.

There are certain features such as URL schemes through which they can transfer the data but with limited conditions.

To conduct a security assessment of the iOS application, you need to follow some standard criteria from industry. Open Web Application Security Project (OWASP) Top 10 Mobile Risks is the list of vulnerabilities that are usually found in iOS applications.

You can always find latest top ten list for mobile at https://www.owasp.org/index.php/Projects/OWASP_Mobile_Security_Project_-_Top_Ten_Mobile_Risks.

The major difference between the latest OWASP Top 10 Mobile Risks and its earlier versions is the introduction of a new vulnerability in the list, that is, the lack of binary protection, which is the replacement of sensitive information disclosure.

Nowadays, most of the apps are hybrid apps where they use native app code or web view to design UI and in backend, they use web APIs to communicate with the server. As there are web apps in backend, so almost all attacks that target web applications are applicable to iOS apps as well. If you have never checked web attacks, I would encourage you to go through OWASP Top 10 Web Application Risks at https://www.owasp.org/index.php/Top_10_2013-Top_10.

In order to explain further, I found the stored XSS in one of the top company's iOS app. They were sanitizing the user input in their web application; however, while storing and displaying, the user input was not sanitized for the web APIs used for the mobile. Thus, it allowed the attacker to store malicious JavaScripts in the database and wherever it showed the records to the user from database, it allowed the execution of JavaScripts and hence it results in the stored XSS.

Insecure data storage is all about storing the data insecurely on the device. Many times, an application uses simple plist files or unencrypted database to store sensitive information such as passwords or other user-related information.

This is the most frequent and, sometimes, very easy-to-find vulnerability. An application should never store sensitive data such as the users' personal, financial, or healthcare information in plain text format. If app developers are storing sensitive information, it may be non-compliant with various compliance standards such as Payment Card Industry Data Security Standard (PCI DSS), Health Insurance Portability and Accountability Act (HIPAA), and so on. We will look into this vulnerability in detail, such as various formats of storage, and how to look into this data in the upcoming chapters.

Insufficient transport layer protection is all about how to send your data across the network. Mobile apps are frequent victims of coffee shop attacks and if an application is sending sensitive data, such as credentials, access tokens, and so on, over HTTP, then any attacker sniffing over the network can easily catch or modify it.

Even if the developer is sending data over HTTPS; however, if he does not validate the sever-side certificates, then it is vulnerable to SSL pinning such as attacks where the attacker performs man-in-the-middle (MITM) attacks with self-signed certificates.

In one of my financial application assessment, the application was taking credit card details from the user and had not implemented any security mechanism to deal with side channel data leakage. Now, in iOS, whenever we background the app, it takes its screenshot and stores it on the device.

Similar to application screenshots, there are various ways such as device logs, pasteboard, cookies, and so on, where the application may leak sensitive data.

In my security assessment, I have reported the login bypass vulnerability in many of the top applications, where the authenticating user was only at the client side. If you put proxy and change the server-side response, you are more likely to be logged in with wrong passwords.

So, as this case study suggests, never reply only on client-side controls for authentication. If you are using OAuth-like authentication schemas, make sure you store tokens on the client device securely. Attacker can easily bypass login on the victim device with leaked tokens.

Nowadays, most of the applications use web APIs to authenticate the users rather than storing credentials locally on the device. In such a scenario, all your web application security attacks are applicable, such as:

Security decisions via untrusted input is about performing actions without proper validation or authorization check of the user. Does your application have functionality to call any number? Do you prompt the user before initiating a call? Are you checking whether the caller is a logged-in user? If not, you are more likely vulnerable to security decisions via untrusted input attack.

Improper session handling is managing the user's session token insecurely. Many times, the developers do not invalidate session tokens at user logout. So, the attacker can reuse these tokens for unauthorized logins.

We will study these concepts practically with more details in the upcoming chapters.

Now, we have established what is meant by an iOS security. We started from absolute basics of what is an iOS operating system and where it's used? You studied the basics of an iOS app development in order to get familiar with the development process and perform code analysis. You learned how to develop a Hello World app and then stepped into some important iOS security concepts such as the iOS security model, iOS security architecture, iOS secure boot chain, iOS application signing, iOS application sandboxing, and so on. We are now good to start exploiting the vulnerabilities in iOS application. In the next chapter, we will do the lab setup that is needed for iOS app pentesting and will start looking for iOS vulnerabilities in the upcoming chapters. 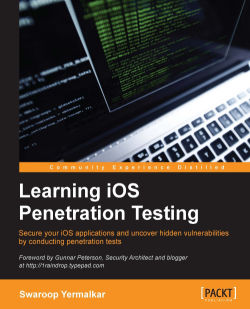