Docker is a Linux container implementation that enables the creation of light weight portable development and production environments. These environments can be updated incrementally. Docker achieves this by leveraging containment principles like cgroups and Linux namespaces along with Overlay filesystem based portable images. Docker provides the networking primitives that allow administrators to specify how different containers network with each application and connect each of its components, then distribute them across a large number of servers and ensure coordination between them irrespective of the host or VM they are running in.

This book will show you how to create, deploy, and manage a virtual network for connecting containers spanning single or multiple hosts.

Docker is a lightweight container technology that has gathered enormous interest in recent years. It neatly bundles various Linux kernel features and services, such as namespaces, cgroups, SELinux, and AppArmor profiles, over union filesystems such as AUFS and BTRFS in order to make modular images. These images provide a highly configurable virtualized environment for applications and follow a write once, run anywhere workflow. An application can be composed of a single process running in a Dcker container or it could be made up of multiple processes running in their own containers and being replicated as the load increases. Therefore, there is a need for powerful networking elements that can support various complex use cases.

In this chapter, you will learn about the essential components of Docker networking and how to build and run simple container examples.

Docker is getting a lot of traction in the industry because of its performance-savvy and universal replicability architecture, while providing the following four cornerstones of modern application development:

Furthermore, wide-scale adoption of Thoughtworks's microservices architecture, or LOSA (Lots of Small Applications), is further bringing potential to Docker technology. As a result, big companies such as Google, VMware, and Microsoft have already ported Docker to their infrastructure, and the momentum is continued by the launch of myriad Docker start-ups, namely Tutum, Flocker, Giantswarm, and so on.

Since Docker containers replicate their behavior anywhere, be it your development machine, a bare metal server, virtual machine, or data center, application designers can focus their attention on development, while operational semantics are left with DevOps. This makes team workflow modular, efficient, and productive. Docker is not to be confused with a virtual machine (VM), even though they are both virtualization technologies. While Docker shares an OS with providing a sufficient level of isolation and security to applications running in containers, it later completely abstracts away the OS and gives strong isolation and security guarantees. However, Docker's resource footprint is minuscule in comparison to a VM and hence preferred for economy and performance. However, it still cannot completely replace VMs and is therefore complementary to VM technology. The following diagram shows the architecture of VMs and Docker:

Each Docker container has its own network stack, and this is due to the Linux kernel NET namespace, where a new NET namespace for each container is instantiated and cannot be seen from outside the container or from other containers.

Docker networking is powered by the following network components and services.

These are L2/MAC learning switches built into the kernel and are to be used for forwarding.

This is an advanced bridge that is programmable and supports tunneling.

Network address translators are immediate entities that translate IP addresses and ports (SNAT, DNAT, and so on).

This is a policy engine in the kernel used for managing packet forwarding, firewall, and NAT features.

Firewall policies for each application can be defined with these.

Various networking components can be used to work with Docker, providing new ways to access and use Docker-based services. As a result, we see a lot of libraries that follow a different approach to networking. Some of the prominent ones are Docker Compose, Weave, Kubernetes, Pipework, libnetwork, and so on. The following figure depicts the root ideas of Docker networking: 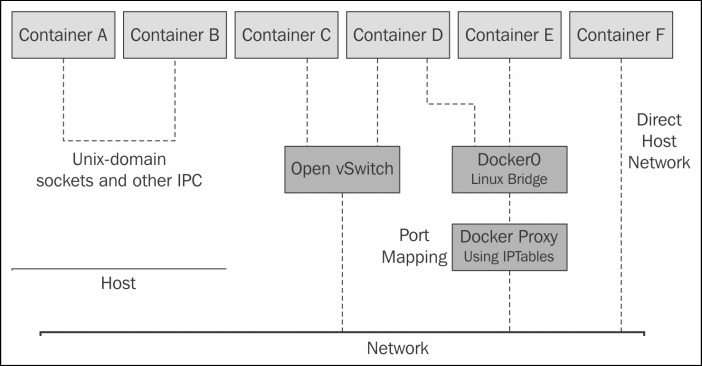 The docker0 bridge is the heart of default networking. When the Docker service is started, a Linux bridge is created on the host machine. The interfaces on the containers talk to the bridge, and the bridge proxies to the external world. Multiple containers on the same host can talk to each other through the Linux bridge.

docker0 can be configured via the --net flag and has, in general, four modes:

In this mode, the default bridge is used as the bridge for containers to connect to each other.

With this mode, the container created is truly isolated and cannot connect to the network.

With this mode, the container created shares its network namespace with the host.

In this section, we look at how container ports are mapped to host ports. This mapping can either be done implicitly by Docker Engine or can be specified.

If we create two containers called Container1 and Container2, both of them are assigned an IP address from a private IP address space and also connected to the docker0 bridge, as shown in the following figure:

Both the preceding containers will be able to ping each other as well as reach the external world.

For external access, their port will be mapped to a host port.

The output will be similar to the one shown as follows, with a bridge name and the veth interfaces on the containers it is mapped to:

How does the container connect to the external world? The iptables nat table on the host is used to masquerade all external connections, as shown here:

How to reach containers from the outside world? The port mapping is again done using the iptables nat option on the host machine.

Open vSwitch is a powerful network abstraction. The following figure shows how OVS interacts with the VMs, Hypervisor, and the Physical Switch. Every VM has a vNIC associated with it. Every vNIC is connected through a VIF (also called a virtual interface) with the Virtual Switch: 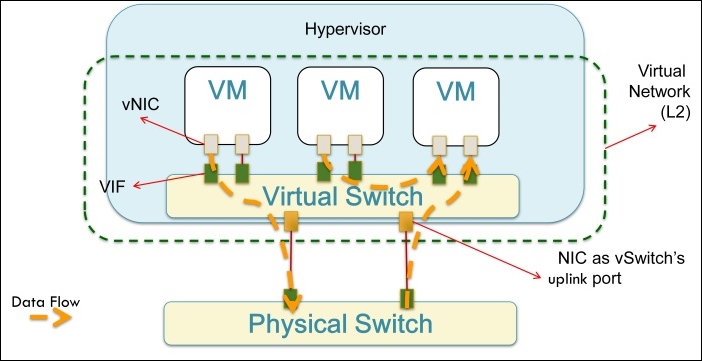 OVS uses tunnelling mechanisms such as GRE, VXLAN, or STT to create virtual overlays instead of using physical networking topologies and Ethernet components. The following figure shows how OVS can be configured for the containers to communicate between multiple hosts using GRE tunnels: 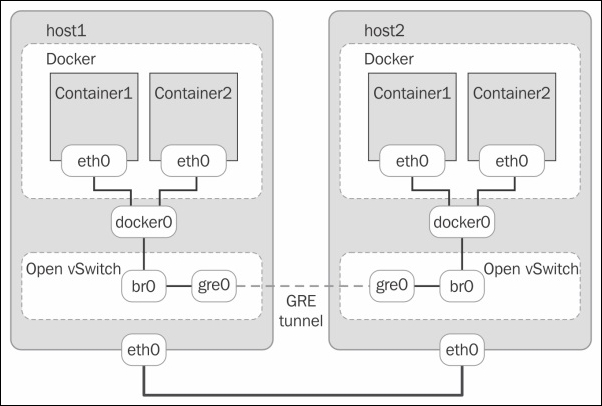 Within a single host, UNIX IPC mechanisms, especially UNIX domain sockets or pipes, can also be used to communicate between containers:

Apps on c1 and c2 can communicate over the following Unix socket address:

In this section, we introduce the concept of linking two containers. Docker creates a tunnel between the containers, which doesn't need to expose any ports externally on the container. It uses environment variables as one of the mechanisms for passing information from the parent container to the child container.

In addition to the environment variable env, Docker also adds a host entry for the source container to the /etc/hosts file. The following is an example of the host file:

There are two entries:

The following figure shows two containers Container 1 and Container 2 connected using veth pairs to the docker0 bridge with --icc=true. This means these two containers can access each other through the bridge:

Links provide service discovery for Docker. They allow containers to discover and securely communicate with each other by using the flag -link name:alias. Inter-container communication can be disabled with the daemon flag -icc=false. With this flag set to false, Container 1 cannot access Container 2 unless explicitly allowed via a link. This is a huge advantage for securing your containers. When two containers are linked together, Docker creates a parent-child relationship between them, as shown in the following figure:

Docker networking is at a very nascent stage, and there are many interesting contributions from the developer community, such as Pipework, Weave, Clocker, and Kubernetes. Each of them reflects a different aspect of Docker networking. We will learn about them in later chapters. Docker, Inc. has also established a new project where networking will be standardized. It is called libnetwork.

libnetwork implements the container network model (CNM), which formalizes the steps required to provide networking for containers while providing an abstraction that can be used to support multiple network drivers. The CNM is built on three main components—sandbox, endpoint, and network.

A sandbox contains the configuration of a container's network stack. This includes management of the container's interfaces, routing table, and DNS settings. An implementation of a sandbox could be a Linux network namespace, a FreeBSD jail, or other similar concept. A sandbox may contain many endpoints from multiple networks.

An endpoint connects a sandbox to a network. An implementation of an endpoint could be a veth pair, an Open vSwitch internal port, or something similar. An endpoint can belong to only one network but may only belong to one sandbox.

A network is a group of endpoints that are able to communicate with each other directly. An implementation of a network could be a Linux bridge, a VLAN, and so on. Networks consist of many endpoints, as shown in the following diagram:

The CNM provides the following contract between networks and containers:

We will discuss the details of how CNM is implemented in Chapter 6, Next Generation Networking Stack for Docker: libnetwork.

In this chapter, we learned about the essential components of Docker networking, which have evolved from coupling simple Docker abstractions and powerful network components such as Linux bridges and Open vSwitch.

We learned how Docker containers can be created with various modes. In the default mode, port mapping helps through the use of iptables NAT rules, allowing traffic arriving at the host to reach containers. Later in the chapter, we covered the basic linking of containers. We also talked about the next generation of Docker networking, which is called libnetwork.

I understand Docker networking much better

I've gotten many book, both free and purchase. The information was correct and the teach very sound. Some of the older books has some dated information, but it was well documented what version of libraries was used. The two books on using Docker that I recently reviewed on the free Mapt account and then purchased has helped me understand Docker a whole lot! 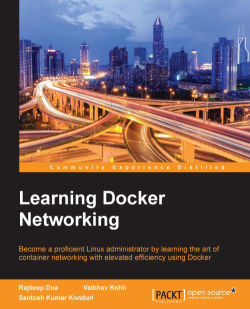