This book will show you how to use Lumberyard to create a multiplayer 3D game with cloud computing, storage, and Twitch integration for user engagement. We will start with an introduction to Lumberyard and provide an overview of its capabilities and integration options. Once the game engine is installed, we’ll guide you through the creation of an immersive game world with characters. You’ll add animations and audio to bring the game to life. We’ll explore external interactions to support live multiplayer game play, data storage, user engagement, and the back end.

By the end of the book, you will be efficient in building cross-platform games using Lumberyard.


Chapter 1. Welcome to the Lumberyard

The purpose of this chapter is to provide you with a brief overview of Lumberyard, what it is capable of, and what you can do with it. We'll start with a brief discussion of where Lumberyard fits into the game engine landscape. Our initial look at Lumberyard will include system requirements and how it integrates with the cloud for computing and storage. You'll be provided with step-by-step instructions for the download and installation process. Lastly, a tour of the Lumberyard interface will be provided.

In this chapter, you will:

Lumberyard is a free 3D game engine that has, in addition to typical 3D game engine capabilities, an impressive set of unique qualities. Most impressively, Lumberyard integrates with Amazon Web Services (AWS) for cloud computing and storage. You will learn about AWS in Chapter 9, Employing Cloud Computing and Storage. Lumberyard, also referred to as Amazon Lumberyard, integrates with Twitch to facilitate in-game engagement with fans. We'll cover Twitch in Chapter 10, Engaging With Users Using Twitch.

Another component that makes Lumberyard unique among other game engines is the tremendous support for multiplayer games. As you'll see in Chapter 7, Creating Multiplayer Gameplay, the use of Amazon GameLift empowers developers to instantiate multiplayer game sessions with relative ease.

Lumberyard is presented as a game engine intended for creating cross-platform AAA games. There are two important components of that statement. First, cross-platform refers to, in the case of Lumberyard, the ability to develop games for PC/Windows, PlayStation 4, and Xbox One. At the time of this book's publication, additional support for Mac OS, iOS, and Android devices was being worked on. There is no doubt that these additional platforms will be supported soon. The second component of the earlier statement is AAA games. A triple-A (AAA) game is like a top-grossing movie, one that had a tremendous budget, was extensively advertised, and wildly successful. If you can think of a console game (for Xbox One and/or PlayStation 4) that is advertised on national television, it is a sign the title is a AAA game.

Now that this AAA game engine is available for free, it is likely that more than just AAA games will be developed using Lumberyard. This is an exciting time to be a game developer.

More specifically, Amazon hopes that Lumberyard will be used to develop multiplayer online games that use AWS for cloud computing and storage, and that integrate with Twitch for user engagement. The engine is free, but AWS usage is not. Specifics on this issue will be covered Chapter 9, Employing Cloud Computing and Storage. Don't worry, you can create single-player games with Lumberyard as well.

Amazon recommends a system with the following specifications for developing games with Lumberyard:

As mentioned above, currently, there is no support for running Lumberyard on a Mac OS or Linux computer.

The game engine is a very large and complex software suite. You should take the system requirements seriously and, if at all possible, exceed the minimum requirements.

The Internet is a dynamic medium and some links are subject to change after this book's publication date. If a link does not work, you can search for the new web page using an Internet browser. Some of the images, buttons, and other graphical references might be different from what is presented here.

The following steps will guide you through the download and installation processes for Lumberyard. Before following these steps, be sure your system meets the minimum requirements listed in the previous section:

If you have a firewall running on your computer, you might be prompted to grant access for Lumberyard to make changes to your computer.

You can launch Lumberyard in one of three ways. First, you can click the Launch button immediately after installation, as illustrated in the previous section. You can also navigate to the location on your hard drive where you have Lumberyard installed, for example, C:/Amazon/Lumberyard/1.1.0.0/dev.

The names and look of the aforementioned icons might be different on your system, depending on what version of Lumberyard you have installed. For example, the Lumberyard Launcher icon was replaced by/renamed to Setup Assistant in v1.2.0.0.

At this point, we want to ensure our installation is complete, including installing any additional software, SDKs, and plugins. The following steps will guide you through the process:

Before you use the Editor, at least the first time you launch it, you will be presented with the Welcome to Lumberyard Editor dialog window, as shown in the following screenshot: 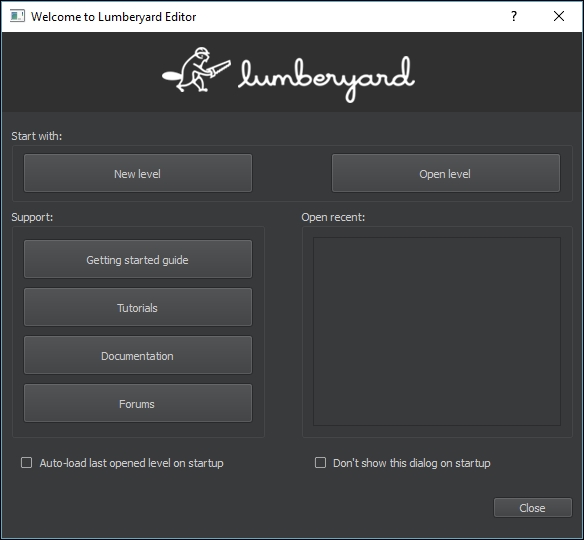 There are four content areas on the Welcome screen and two decisions. The first content area is Start with, which allows you to start a new level or open a level you previously created.

Levels are components of games and games are created by developing multiple linked game levels. The Lumberyard Editor allows you to create and edit game levels.

The second section on the Welcome screen contains four support links, each accessible via a button:

There is also an Open recent: section to the Welcome dialog window. This area will list levels that you have previously saved. This gives you quick access to your recent work.

To review the editor's user interface, we will select New level from the Welcome dialog window. This generates a New Level dialog window. Here, we can name our level and indicate where to store the files associated with the level: 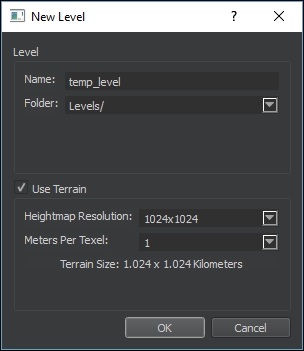 If terrain is being used, you can assign the resolution of the Heightmap and how many Meters Per Texel. We will look at the terrain settings later, in Chapter 3, Constructing an Immersive 3D Game World. For now, we will change the level's name to test_level and click the OK button. We are accepting the default location for new levels; you can change this if needed.

The Generate Terrain Texture dialog window appears next and is shown in the following screenshot. As you can see, there are several decisions we need to make here. At this point, we simply want to review user interface of the Editor. We'll take an in-depth look at the terrain options in Chapter 3, Constructing an Immersive 3D Game World. For now, simply click the OK button to accept the default settings: 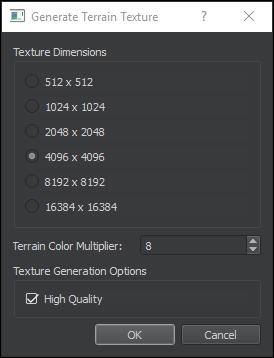 In the next section, we will review user interface of the Lumberyard Editor.

The main interface of Lumberyard Editor is comprised of 10 areas, or workspace components. The following screenshot illustrates each of these areas: 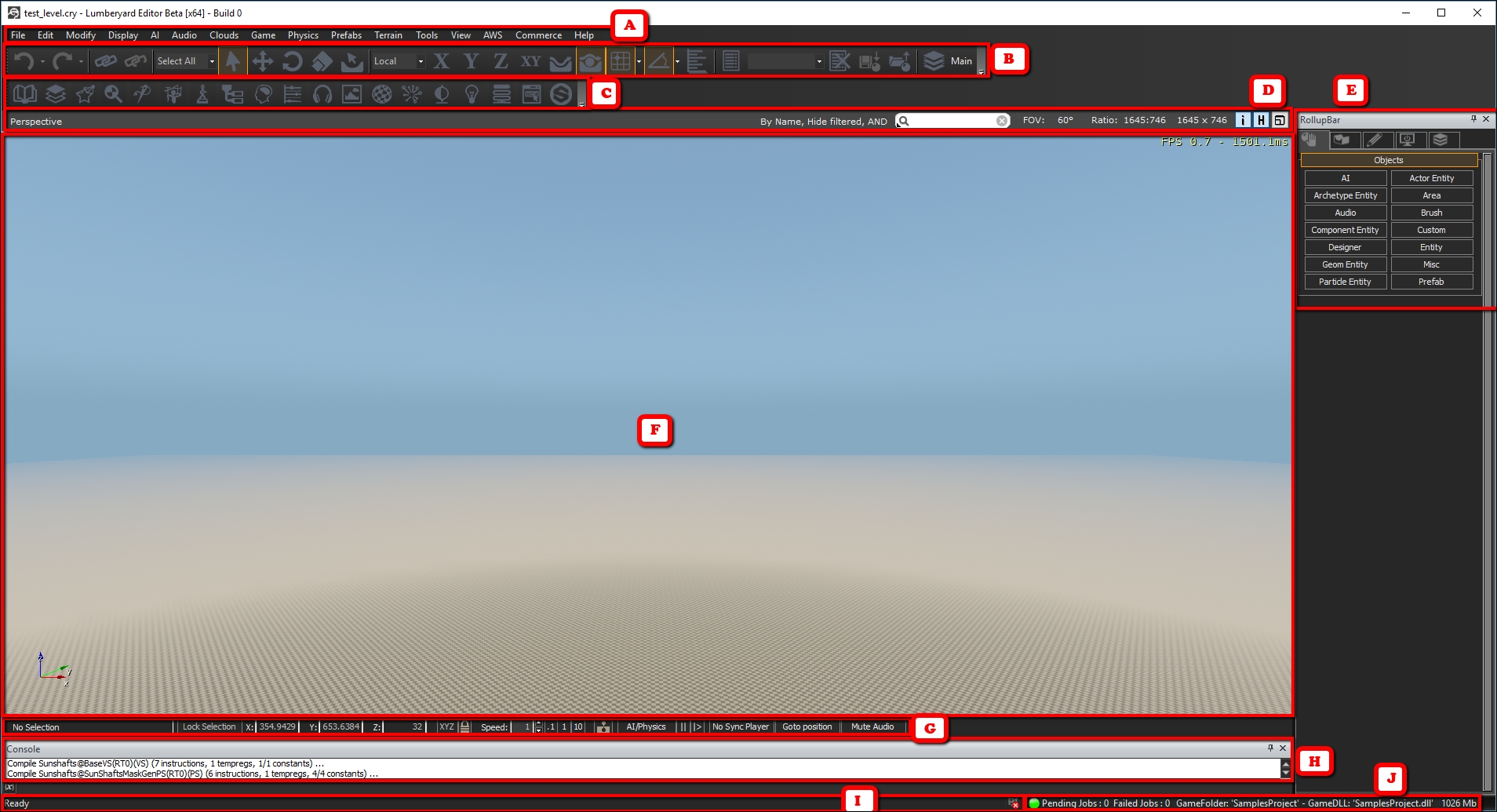 Each area of the user interface provides you with access to specific functions. The individual areas are described in the next 10 subsections with reference to the previous screenshot. You will learn more about each area and the supported functionality as we build our first game throughout the remainder of this book.

This area consists of a menu bar at the top of the interface. Each menu label, listed as follows, presents the user with multiple options and functions:

A prefab is a group of predefined assets. Using prefabs can speed up the content creation process.

So far, we have only created a test level. You should feel free to explore the menu items to become more familiar with them.

Toolbars (areas B and C)

The default view for the editor includes two rows of toolbars containing icons for commonly used functions and features. You are able to add, remove, and relocate these icons. You can even move the toolbars. This area is highly customizable. It is recommended that you leave the toolbars as is until you become more familiar with the interface and developing with Lumberyard.

This is an information header bar that pertains to the perspective viewport (area F). There is also a search bar to help you find objects. This is especially useful in complex game worlds where selecting a very specific object could be challenging.

The rollup bar provides categorized access to a host of game components and functionality. The features are categorized into tabs for Objects, Terrain, Modeling, Display, and Layers. You will gain exposure to these starting in Chapter 3, Constructing an Immersive 3D Game World.

The Modeling tab is not present in every version of Lumberyard, so if you do not have that tab, that is okay. Once Lumberyard is out of beta, more information will be available about the full game engine.

This viewport provides a visual representation of your game level in 3D.

This area is located directly below the viewport. When an object is selected, the viewport controls allow you to modify X, Y, and Z axis values, lock and unlock objects, control speed, and more.

The console provides systems information, output, game data, and input, as appropriate. It can be a key component when debugging.

Status footer (areas I and J)

The last line of the interface is the status footer. Various types of information about the game project, files, and processes are visible in this area.

In this chapter, we explored Amazon's new game engine, Lumberyard. The benefits of using Lumberyard for creating multiplayer AAA games was realized and included the ability to integrate with AWS for cloud computing and storage as well as integrating with Twitch for user engagement. We downloaded and installed Lumberyard, and installed additional software, SDKs, and plugins. Our final act in this chapter was to walk through the Lumberyard Editor's user interface, at a high level.

In the next chapter, we'll start planning our game for Lumberyard. This will be the game that we will build throughout the remainder of this book. We'll also explore Lumberyard's graphics capabilities and requirements. 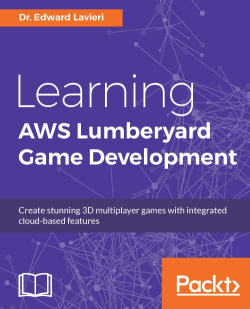