As the new official language for Android, Kotlin is attracting new as well as existing Android developers. As most developers are still working with Java and want to switch to Kotlin, they find a combination of these two appealing. This book addresses this interest by bringing together Spring, a widely used Java SE framework for building enterprise-grade applications, and Kotlin.

Learn Spring for Android Application Development will guide you in leveraging some of the powerful modules of the Spring Framework to build lightweight and robust Android apps using Kotlin. You will work with various modules, such as Spring AOP, Dependency Injection, and Inversion of Control, to develop applications with better dependency management. You’ll also explore other modules of the Spring Framework, such as Spring MVC, Spring Boot, and Spring Security. Each chapter has practice exercises at the end for you to assess your learning.

By the end of the book, you will be fully equipped to develop Android applications with Spring technologies.

The title of this book makes reference to two of the greatest stage names—Spring, ostensibly the best framework of Java, and Android, which has the greatest number of clients of any operating system. This book will help to you learn and develop a product-ready application on your own which will be lightweight, secure, powerful, and responsive.

Before start learning about the Spring and Android, we will demonstrate examples and code from Kotlin, as this programming language is very new to developers. These days, Kotlin is so popular that Google has declared it the official language of Android. Moreover, the Spring language also supports Kotlin. In this book, we will figure out how to make a robust, secure, and intense server dependent on Spring in the Kotlin language, and use the substance and utilize of this server in an Android application as a client.

In this chapter, you will learn how to set up the environment to create Spring and Android projects, including the required tools and applications. This will include going through steps with accompanying images for visualization purposes. The developers who know Java, at that point, will have some leeway since it is the common platform among Spring and Kotlin. We will demonstrate the code and models with Kotlin that runs on JVM. The Kotlin is designed by JetBrains. On the off-chance that you are new to Kotlin and Spring, being familiar with Java will allow you to write code in Kotlin with ease.

To run these frameworks, we need some tools and a specific operating system. Here is the list of these:

You can find all the examples from this chapter on GitHub: https://github.com/PacktPublishing/Learn-Spring-for-Android-Application-Development/.

An environment setup is one of the prime parts before developing an application. To the developers who are currently working with Spring, feel free to skip this part. This section is for new developers, who need to set up the foundation and the instruments to begin developing.

Here are the steps of how to set up the environment in the accompanying segments.

Spring is the most powerful Java application framework; it is currently the most popular in the enterprise world. It helps to create high-performing applications that have easily-testable and reusable code. This is open source and was written by Rod Johnson, first released under the Apache 2.0 license in June 2003.

To create and run Spring applications, you need some tools and language supports. You also need a server to test and run your project in your operating system. We will show you how to set up the environment for Spring.

The following software and tools are needed with the current version:

Java is available in two editions:

Here, we will opt for Standard Edition. Java is free to download and use for all operating systems.

After installation, please check whether Java is installed. To check, open your Terminal and type java --version. If Java is installed successfully, you will see the following Java version:

Alternatively, you will see an error. If this occurs, try to install it again to resolve it.

Developed by JetBrains, Kotlin is an open source and statically-typed programming language. It runs on the Java Virtual Machine (JVM) and can be compiled to JavaScript source code or use the LLVM compiler infrastructure. Kotlin is easy to learn, especially for Java developers.

To use Kotlin, you don't need to download or set it up separately like Java. It comes with the IDEs. Kotlin is a built-in feature of Android Studio, IntelliJ Ultimate, or IntelliJ Community. To use Kotlin in Eclipse, you need to follow these steps: 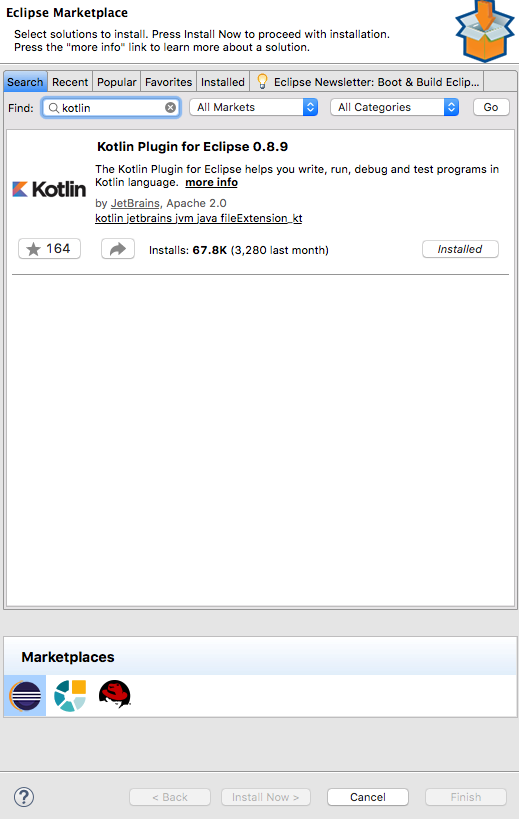 We require a steady, free, and open source web server that we can use to create and run Spring-Framework-based ventures. We will utilize Apache Tomcat, which is easy to understand for all developers of Java. You can also use Jetty or Undertow to develop in Spring.

Tomcat is an open source web server. This allows the utilization of Java Servlets and JavaServer Pages (JSP) for the Java server. The core segment of Tomcat is Catalina.

Apache Tomcat is a web server and not an application server.

If you use Tomcat version 9, you have to use Java version 8 or later. According to the Apache Tomcat source, this version builds on Tomcat 8.0.x and 8.5.x, and implements the Servlet 4.0, JSP 2.3, EL 3.0, WebSocket 1.1, and JASPIC 1.1 specifications (the versions required by the Java EE 8 platform).

Let's see how to configure and verify the Tomcat server.

You can configure the Tomcat server in two ways—either using the Terminal or from the IDE. To set up the server, you have to download the Tomcat server's content from https://tomcat.apache.org/download-90.cgi.

Configuring Tomcat by these following steps: 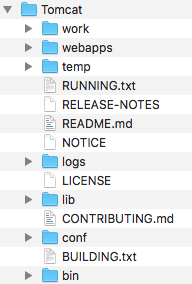 To check the current directory, type the following: 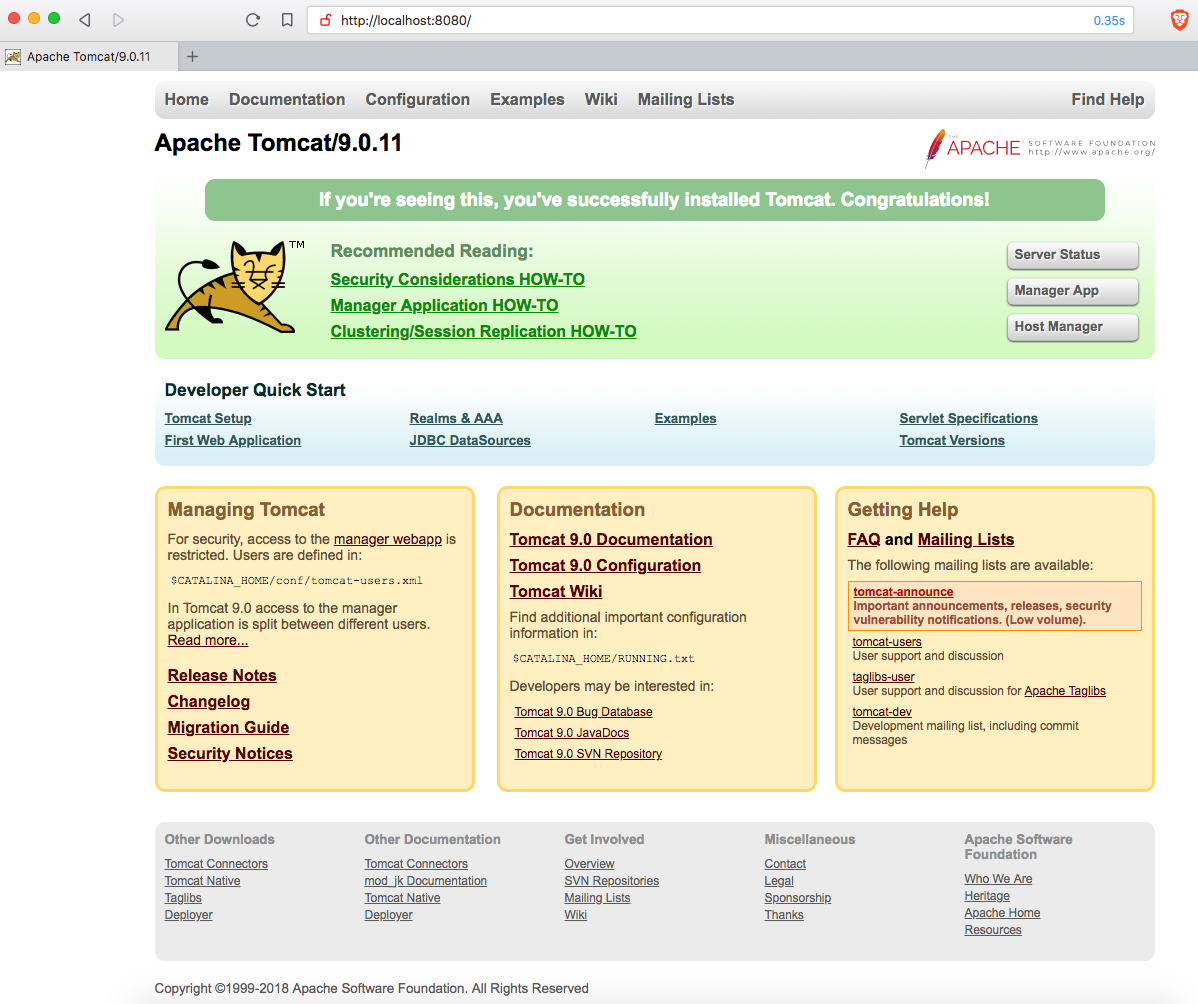 This is how we can configure Tomcat from the Terminal.

When it comes to writing Java programs, you can use any text editor. However, we encourage you to use an integrated development environment (IDE) because they provide numerous features. IntelliJ IDEA, Eclipse, and NetBeans are the best of them. IntelliJ is a paid IDE, but you can use Eclipse or NetBeans, which are free.

We can use IDE to do the following:

In this book, we will work with Eclipse and IntelliJ IDEA.
You can download the Ultimate version, which has a 30-day free trial, from https://www.jetbrains.com/idea/download/.

For Spring, you should download Eclipse IDE for the Java EE Developers version.

For both, once you start IDE, it will ask for a workspace. You can create a folder of your choice and give the path of that folder.

IntelliJ IDEA is a Java coordinated development environment for developing computer software. It is developed by JetBrains and is accessible as an Apache 2 Licensed people group release and in a restrictive business version. Both can be utilized for business development.

Eclipse is an incorporated development environment utilized in computer programming and is the most generally-utilized Java IDE. It contains a base workspace and an extensible module framework for tweaking the environment. Eclipse is composed generally in Java and its essential utility is for developing Java applications, yet it might likewise be utilized to develop applications in other programming dialects by means of modules, including Ada, ABAP, C, C++, C#, Clojure, COBOL, D, Erlang, Fortran, Groovy, Haskell, JavaScript, Julia, Lasso, Lua, NATURAL, Perl, PHP, Prolog, Python, R, Ruby (including the Ruby on Rails framework), Rust, Scala, and Scheme.

To use Kotlin in Eclipse, you will need to install the Kotlin plugin.

Eclipse doesn't have the latest version of Kotlin.

Follow these steps to create a web project and implement the Tomcat server into your project: 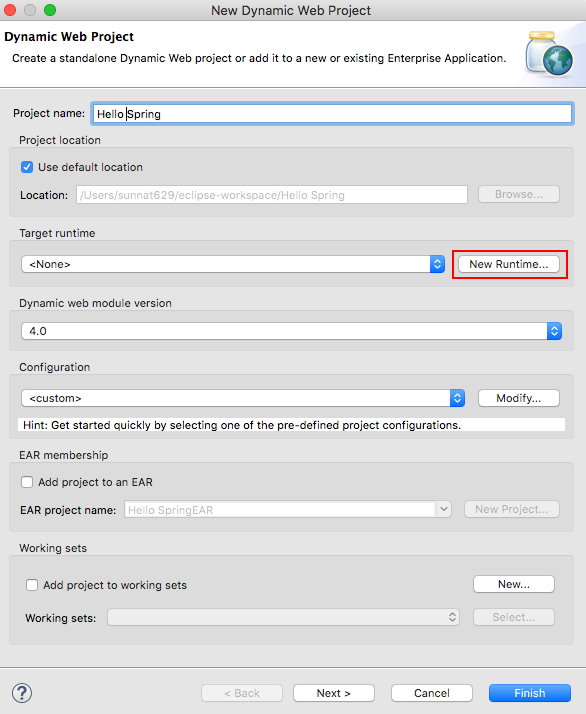 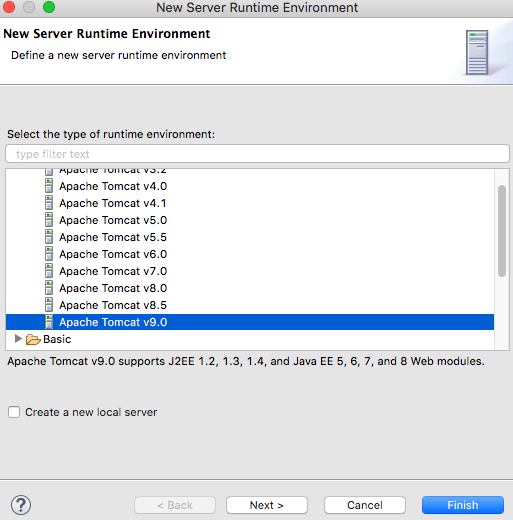 You will find these files after creating the project: 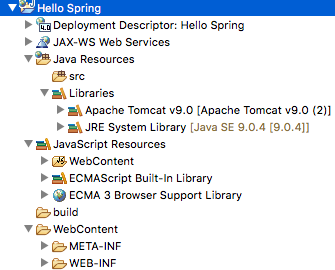 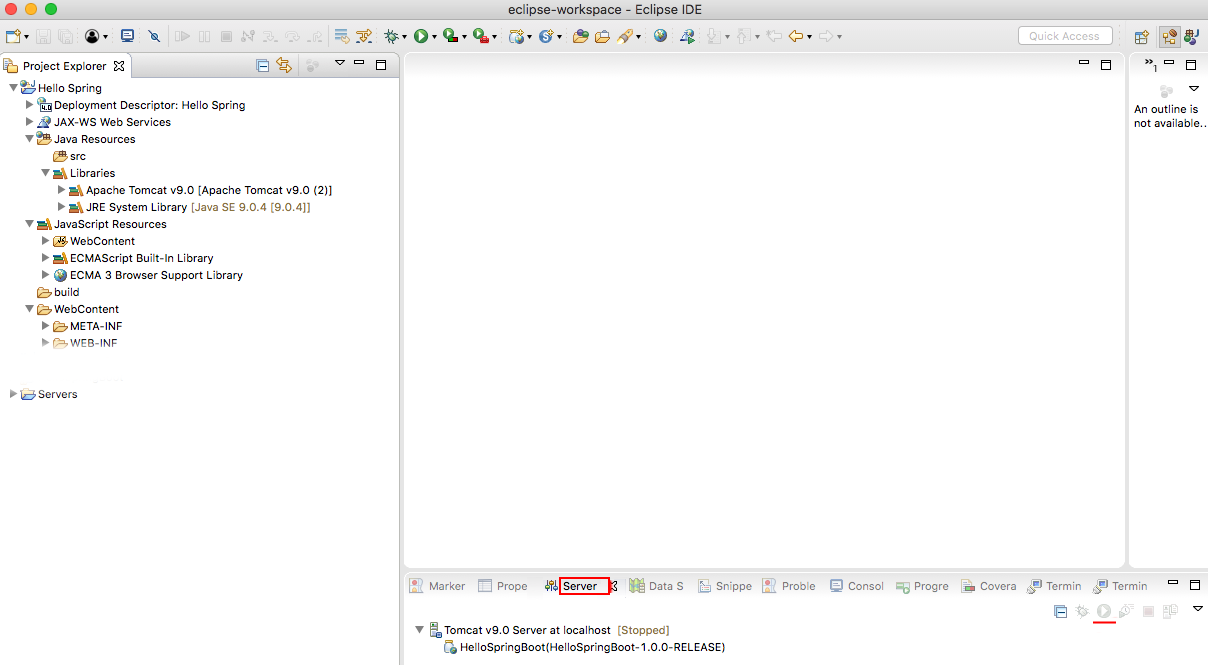 Android is a mobile operating system developed by Google, in light of an altered form of the Linux kernel and other open source software and designed basically for touchscreen mobile gadgets, for example, cell phones and tablets. What's more, Google has additionally developed Android TV for televisions, Android Auto for vehicles, and Wear OS for wristwatches, each with a specific UI. Variations of Android are likewise utilized on IoT, advanced cameras, PCs, and various hardware. It was first developed by Android Inc., which Google purchased in 2005, and Android was disclosed in 2007. The first commercial Android devices were launched in September 2008. The current version has since experienced numerous significant discharges, with the present variant being 9 Pie, released in August 2018. The core Android source code is known as Android Open Source Project (AOSP) and is authorized under the Apache License.

In this book, we will figure out how to create a REST API, security, and a database in a Spring platform on a server. We will also learn how to make an Android application and retrieve data from the server, as well as its utilization as a client.

To download Android Studio, visit https://developer.android.com/studio/. Here, you will find the latest version of Android Studio to download. The best part is that this includes JRE, the latest SDK, and other important plugins to develop.

Install the Android Studio application after downloading it. This tool is very easy to use.

Don't forget to update and download the latest version of the SDK platform. To update or install a new SDK platform, go to the SDK Manager. In the SDK Platform, you can see the list of all the Android version's platforms.

If you have read and installed the environment without any hassle, you are ready to proceed with learning the information in this book. We have submitted the code on GitHub and shared the link in the Technical requirements section, so you can use that example code.

This chapter is mainly for those developers who are new to this platform. We have shown the setup procedure using some specific tools and applications and you can also develop your project with different tools and applications. We have looked at how to set up an environment to develop Spring and Android. You are now familiar with all the required tools and software. Now can you configure the Tomcat server in your OS and familiarize yourself with how to start and stop the server. You can decide which IDE you need for developing. We also learned the installation procedure for Android Studio without any hassle. Lastly, there are no criteria to use the latest version of the tools or software.

In the next chapter, we will explore Kotlin, which is a statically-typed programming language and the official language for Android.


Read more Unlock this book with a 7 day free trial.

There are very few publishers I wholeheartedly recommend. Packt is one of them. Always very high quality books and great customer service. 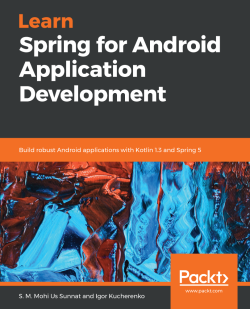