Python is a great language to get started in the world of programming and application development. This book will help you to take your skills to the next level having a good knowledge of the fundamentals of Python.

We begin with the absolute foundation, covering the basic syntax, type variables and operators. We'll then move on to concepts like statements, arrays, operators, string processing and I/O handling. You’ll be able to learn how to operate tuples and understand the functions and methods of lists. We’ll help you develop a deep understanding of list and tuples and learn python dictionary. As you progress through the book, you’ll learn about function parameters and how to use control statements with the loop. You’ll further learn how to create modules and packages, storing of data as well as handling errors. We later dive into advanced level concepts such as Python collections and how to use class, methods, objects in python.

By the end of this book, you will be able to take your skills to the next level having a good knowledge of the fundamentals of Python.


Chapter 1. Getting Started with Python

The Python language had a humble beginning in the late 1980s when a Dutchman Guido Von Rossum started working on a fun project, which would be a successor to ABC language with better exception handling and capability to interface with OS Amoeba at Centrum Wiskunde and Informatica. It first appeared in 1991. Python 2.0 was released in the year 2000 and Python 3.0 was released in the year 2008. The language was named Python after the famous British television comedy show Monty Python's Flying Circus, which was one of Guido's favorite television programmes. Here we will see why Python has suddenly influenced our lives and the various applications that use Python and its implementations. In this chapter, you will be learning the basic installation steps that are required to perform on different platforms (that is Windows, Linux, and Mac), about environment variables, setting up of environment variables, file formats, Python interactive shell, basic syntaxes and finally printing out formatted output.

Now you might be suddenly bogged with the question, why Python? According to  Institute of Electrical and Electronics Engineers (IEEE) 2016 ranking Python ranked third after C and Java. As per Indeed.com's data of 2016, the Python job market search ranked fifth. Clearly, all the data points to the ever rising demand in the job market for Python. Its a cool language if you want to learn just for fun or if you want to build your career around Python, you will adore the language. At school level, many schools have started including Python programming for kids. With new technologies taking the market by surprise Python has been playing a dominant role. Whether it is cloud platform, mobile app development, BigData, IoT with Raspberry Pi, or the new Blockchain technology, Python is being seen as a niche language platform to develop and deliver a scalable and robust applications.

Some key features of the language are:

One of the most famous platforms where Python is extensively used is YouTube. The other places where you will find Python being extensively used are the special effects in Hollywood movies, drug evolution and discovery, traffic control systems, ERP systems, cloud hosting, e-commerce platform, CRM systems, and whatever field you can think of.

Here we will look forward to the installation of Python on three different OS platforms, namely, Windows, Linux, and Mac OS. Let's begin with the Windows platform.

Python 2.x can be downloaded from https://www.python.org/downloads. The installer is simple and easy to install. Perform the following steps to install the setup: 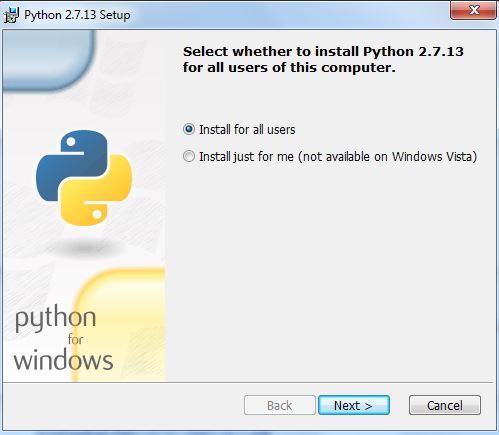 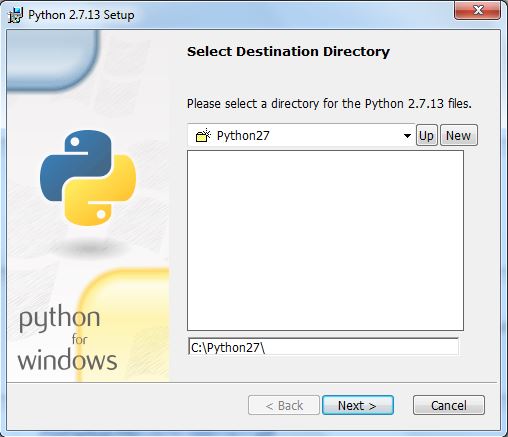 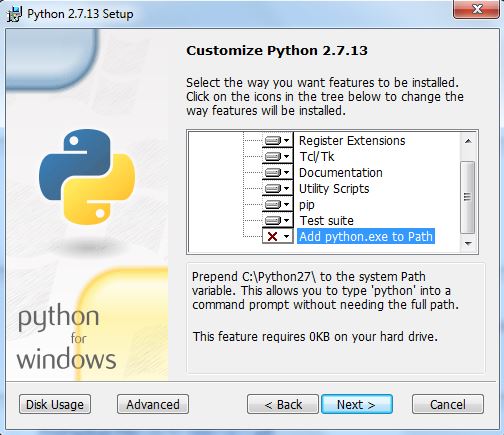 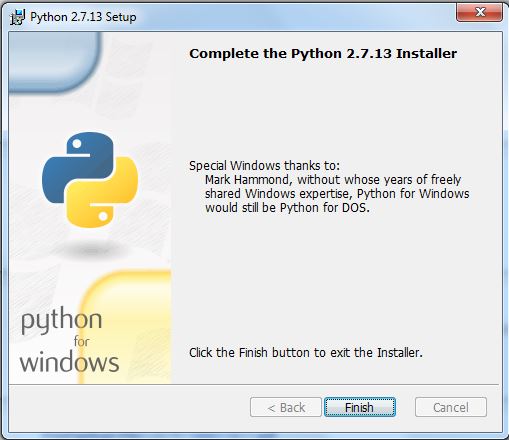 For Mac OS, you will get the installer from the site https://www.python.org/downloads/mac-osx/.

For the new Mac OS X, Sierra comes loaded with Python 2.7 and it's good for learning but the same cannot be used to develop advanced-level programs. You do not need to separately install Python on the new Mac OS X. However, a word of caution is that the version of Python packed with the Mac OS could be out of date and might require updating. If you still want to install a separate version, you can follow the simple steps mentioned as follows:

Notepad++ is one of the easy-to-use text editors and is a free open source software program, which could be easily downloaded from https://notepad-plus-plus.org/. We will be using this text editor to create simple programs.

Python interactive shell is also known as Integrated Development Environment (IDLE). With the Python installer, two interactive shells are provided: one is IDLE (Python GUI) and the other is Python (command line). Both can be used for running simple programs.

For complex programs and executing large files, the windows command prompt is used, where after the system variables are set automatically, large files are recognized and executed by the system. 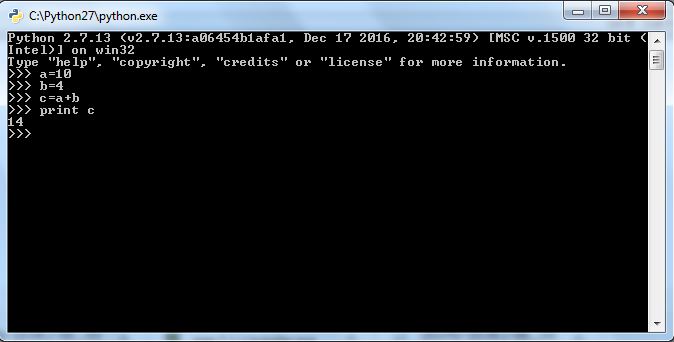 If you remember the installation steps explained earlier, you might be still thinking what are system variables? They are a set of predefined variables, which are available to all programming units. If it's not set, then each and every time you want to run your program or execute a Python file, you will have to manually provide path for each Python executable, but if python.exe is set as a system variable, then the system automatically recognizes your programming instruction and starts executing.

Here, if python.exe is not provided to the path variable, then the system does not recognize python as a command, as shown in the following screenshot: 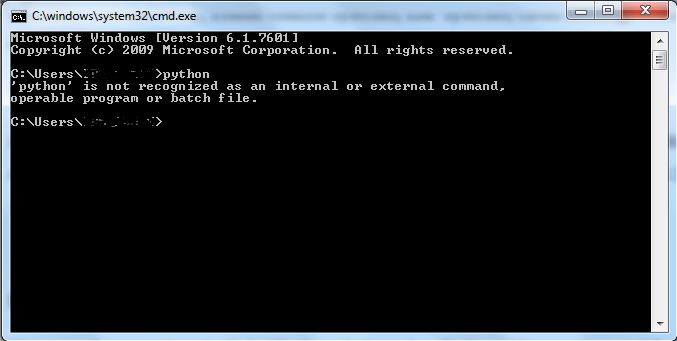 The Windows command prompt does not recognize python as shown in the previous screenshot. Once Python has been updated in the path variables or system variables, the windows command line recognizes the python command and executes as shown here: 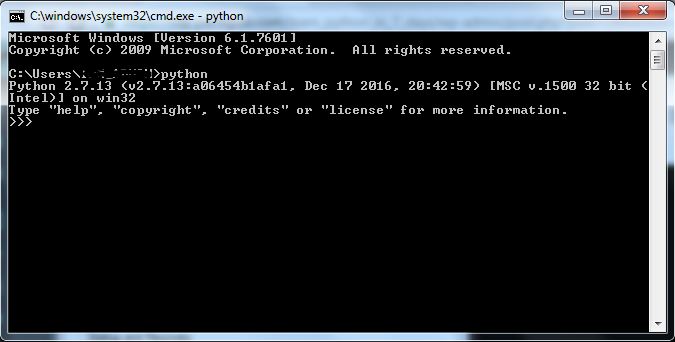 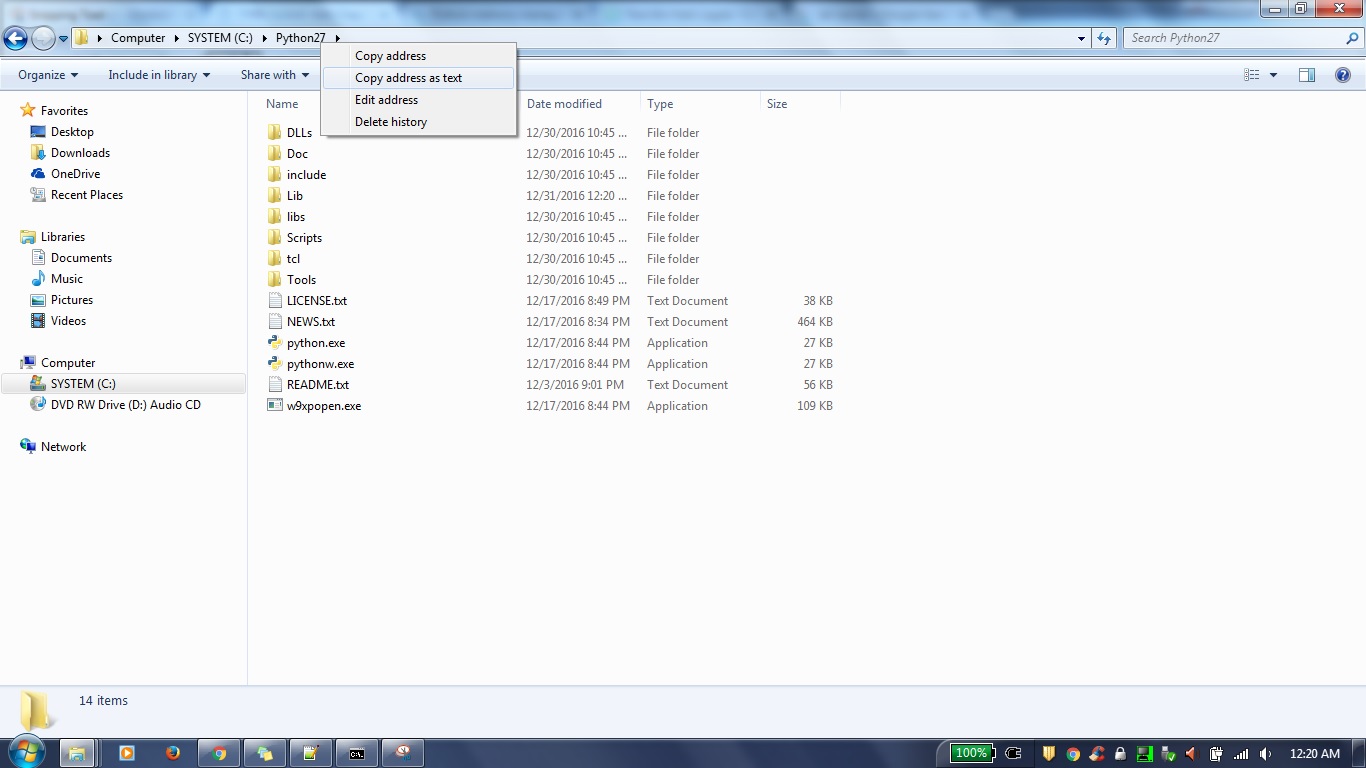 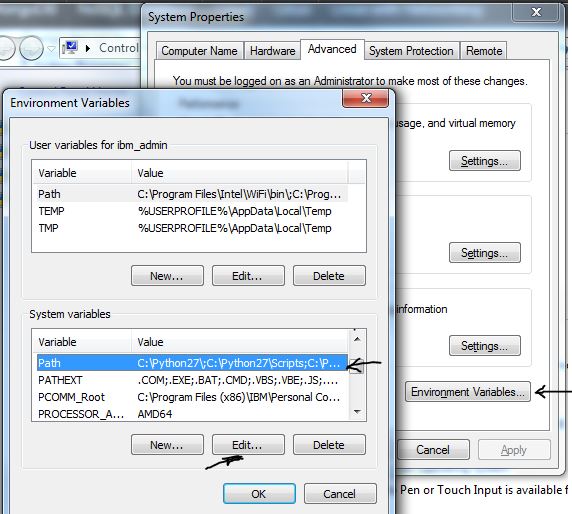 Linux comes with different types of shells and the Python directory path is usually /usr/local/bin/python:

Here, simply you need to edit the launchd.conf file and add the path variable to the file:

Congratulations on your successful installation. Now you can start programming. Open Notepad++ and create a new file. In the new file, type the following:

Save the file as hello.py.

Open the command prompt and traverse to the folder where your file is located using cd and then the path of the folder. For executing the file, the command will be python hello.py as shown in the following screenshot: 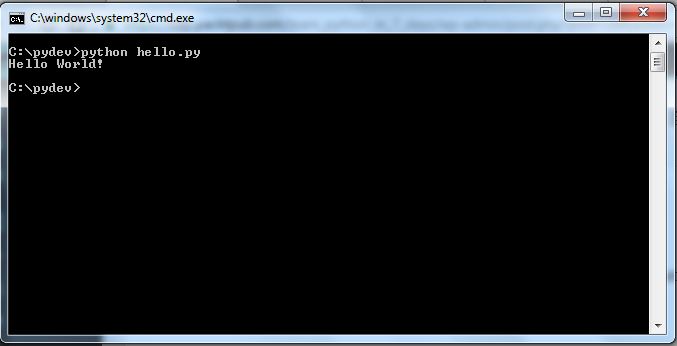 It is quite easy, isn't it? Likewise, you can execute all the Python files. Once you start working on projects and large files, it's always good to remain organized by creating a folder structure.

Basic syntaxes can be referred to as simple guidelines that every programming language requires. Let's try to understand from our daily lives. Let's say you can't eat your food without having it dressed and placed properly on the platter. You need to have proper dressing of food before you can consume it. You prepare a special drink comprising three measures of Gordon gin, one of vodka, half of Kina Lillet, and follow the process to mix in steps. The process is necessary to have a perfect blend. These are sort of syntaxes when we talk in terms of programming languages.

Kina Lillet-Lillet (French pronunciation: [li'le]), classed as an aromatized wine within EU law, is a French aperitif wine from Podensac, a small village south of Bordeaux. It is a blend of 85% Bordeaux region wines (Semillon for the Blanc and for the Rosé, Merlot for the Rouge) and 15% macerated liqueurs, mostly citrus liqueurs (peels of sweet oranges from Spain and Morocco and peels of bitter green oranges from Haiti). The mix is then stirred in oak vats until blended. During the aging process, Lillet is handled as a Bordeaux wine (undergoing fining, racking, filtering, and so on).The preceding information has been taken from https://en.wikipedia.org/wiki/Lillet.

Python doesn't care if you use single quotes or double quotes to print a single statement. But, surely, both has some significance while printing complex statements, which we will see soon.

I am mad in love  do you think  I am doing the right thing? One way is to enclose the complete thing within the triple quotes as shown here:

Alternatively, you can also use double quotes three times to achieve the same thing:

The preceding two examples are not in formatted form, they are just to show how we can achieve multiline printing.

Let's try another example. What should be the outcome of the following statement?

The preceding piece of code gives the following results:

Python simply interprets that the statement terminated with a single quote after it. The solution is to enclose the complete sentence within double quotes as shown:

The Python back slash is used for continuation of the print statement. You can stretch a single statement across multiple lines:

This gives the following output:

String inside the quotes

For printing a string, either a pair of single (' ') quotes or pair of double quotes (" ") can be used as shown in the succeeding examples:

This gives the following results:

The escape sequence is used to insert the tab, the newline, the backspace, and other special characters into your code. They give you greater control and flexibility to format your statements and code:

The preceding code executes with a beep sound. If you did not hear the beep sound, check your speakers.

Two strings can be joined using the + operator:

The following is the output of the preceding code:

Consider an example where you would want to print the name, marks, and the age of the person:

The output will be as follows:

You can see the output, but the output that is displayed is not formatted. Python allows you to set the formatted output. If you have done some coding in C language, then you should be familiar with %d, %f, %s. In order to represent an integer %d is used, %f is used for float, and %s is used for string. If you used %5d, it means 5 spaces. If you used %5.2f, it means 5 spaces and .2 means precision. The decimal part of the number or the precision is set to 2. Let's use the formatting on the preceding example:

The output we get is as follows:

The preceding output is much better than the previous one. You can see Marks76.901 set to 76.90 automatically.

The most unique characteristic of Python, unlike other programming languages, is indentation. Indentation not only makes Python code readable, but also distinguishes each block of code from the other. Let's explain this with an example:

While writing the code, a new block of code starts with a colon followed by a tab. Here, after the function fun(), a colon is provided which will start the function body, pass is part of the function fun() and it is placed at one tab space. Likewise, the for loop starts with a colon. Here, most people get confused whether to use a tab or space. It is advisable to stick to only one type and follow the same across the whole code. If the indentation is not strictly implemented, then code execution will throw an error.

In the next chapter, we will see immutable data types.

Read more Unlock this book with a 7 day free trial.
About the Authors
The book thus far has been easy to follow.

4
02 October 2017 cliffoxstable
This product is easy to read, has been provided in multiple packages (I use both pdf and kindle versions), and I am using it to learn Python.

5
06 September 2017 Trusted Customer
Too much inaccurate coding for a beginner's book. 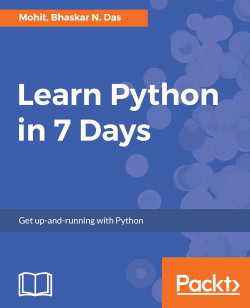